Manara is a social impact edtech startup that runs cohort-based training programs for computer science students and software engineers, and connects them to full-time remote and onsite jobs with top global tech companies such as Meta, Google, Amazon, Repl.it, Zalando, and many others.

By Pamella de Leon June 16, 2022
Opinions expressed by Entrepreneur contributors are their own.
You're reading Entrepreneur Middle East, an international franchise of Entrepreneur Media.

This is where Manara comes in- a social impact edtech startup that runs cohort-based training programs for computer science students and software engineers, and connects them to full-time remote and onsite jobs with top global tech companies such as Meta, Google, Amazon, Repl.it, Zalando, and many others. Bringing together a community of worldwide tech professionals and alumni, the platform provides career guidance, training, interview preparation, referrals, and job placement support.

With a mission to unlock human potential, particularly for female talent in the MENA, the startup Manara's vision is to diversify the global tech sector while also elevating the economies of the region.

Headquartered in Silicon Valley, California, the remote-first global startup is founded by Iliana Montauk and Laila Abudahi, who met at Gaza Sky Geeks (GSG), the first and only tech hub and startup accelerator in Gaza, Palestine that is run by Mercy Corps and funded by Google. Montauk had co-founded and directed GSG, wherein she led a crowdfunding campaign on Indiegogo to raise US$250,000 as well as help increase the participation of women in talent pipeline activities from 25% to 49%. On the other hand, Abudahi, born and raised in Gaza, hacked her way from Palestine into becoming a software engineer at top tech companies including computer hardware manufacturer Nvidia in Silicon Valley. Montauk and Abudahi ended up becoming friends in the US, and the duo's insightful brainstorming sessions ultimately led to the creation of Manara.

Having witnessed firsthand the strong pool of tech talent in Palestine as well as across the MENA region, the co-founders were keen to realize meaningful social impact by giving them the opportunity to build and develop their careers, with a specific focus on women in the field. "The Middle East has the world's youngest population, and it has made large investments in education since the Arab Spring," Montauk explains. "The number of college grads is doubling every five years. There's a real interest in science, technology, engineering, and mathematics (STEM). In Palestine, for example, the number of high school students applying to the Code for Palestine program increased 22x between 2015 and 2022... This region also has a strong pool of female computer scientists. An estimated 52% of computer science graduates in Palestine are women, 62% in Tunisia. [Meanwhile], 83% women computer science graduates in Palestine are unemployed, and numbers are similar in other countries."

But while this may be the scene in the MENA region, Montauk points out that Europe's growing tech sector is, at the same time, seeking out new ways to access talent- remote or onsite. According to Montauk and Abudahi, Manara thus presents a distinct offering to bridge the gap between all these companies and talent available in the MENA. "It's difficult for companies to find talent in a region they are unfamiliar with," explains Montauk.

"Even if they make the effort, most of the talent pool simply aren't ready to work at these companies. We're therefore making a sustained, long, and deep investment in building a tech training platform and community that has a flywheel effect. We have expertise on various dynamics in the region (especially those that impact women, and that may be hard to understand for people who aren't from here), and we leverage that expertise to achieve the success we've demonstrated."

Related: Perseverance: The Key To An Entrepreneur's Success In Palestine 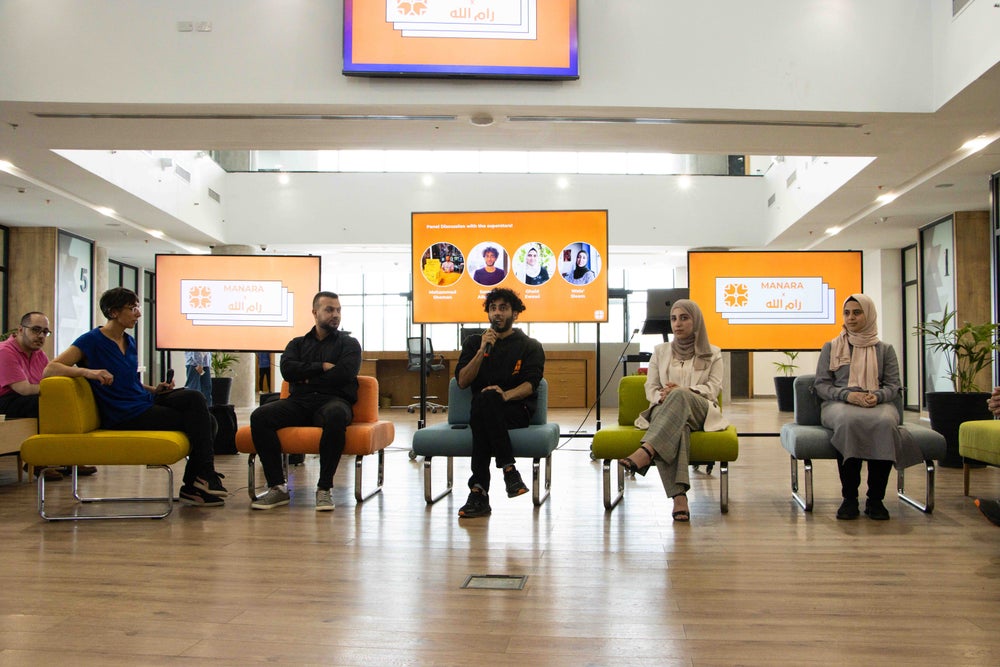 With its first beta pilot cohort taking place in September 2018, and then a second cohort in February 2020, the startup officially launched in November 2020. Today, Manara's participants get access to guidance on technical skills, mentorship, career guidance, mock interviews, career planning guidance, salary negotiation, soft skills, and support finding jobs. As a social impact business, Manara monetizes from both of its channels- when the talent finds a job, they pay back a percentage from their salary for their tuition, whereas companies pay a recruiting fee when they hire from the startup. Its real effectiveness is in its successful statistics- in just the past two months, Meta, Google, and Amazon have made offers to 20 Manara alumni, and in total, the Manara team have secured 80 roles for computer scientists and software engineers in tech companies in Europe, North America, and the UAE.

For instance, e-commerce platform Noon.com recently hired six engineers from Palestine through Manara, allowing them to work in a hybrid model by alternating some months in Dubai and others in Palestine. Besides Noon, Careem and other UAE-based startups have also made use of Manara's talent pool. Having had just 17 participants in 2020, Manara's cohort grew to 200 participants in 2021 (the same year when the company was accepted into the highly sought-after accelerator program run by Silicon Valley-based Y Combinator), and it had the same number of participants in 2022.

Its latest cohort has also expanded to include people from Iraq, Morocco, Tunisia, Lebanon, Algeria, Jordan, Iraq, and Egypt. When asked about the impact the program has on these professionals, Montauk points out the changes in their salaries: "Usually people earn around $10-20,000 per year when they join Manara. On average, they are increasing their salaries 300% in around eight months; some have even gotten salaries above $100,000."

The company has managed to secure an impressive list of backers too- in May this year, Manara secured $3 million in a pre-seed funding round led by global payments platform Stripe, with participation from LinkedIn founder Reid Hoffman, Y Combinator founder Paul Graham, Lean Startup founder Eric Ries, as well as Careem co-founder and CEO Mudassir Sheikha. Prior to this investment round, the Manara team had been bootstrapping, having only received funds from Y Combinator in January 2021.

However, today, Manara's other investors include European venture capital fund Seedcamp, US-based early-stage venture firm Precursor Ventures, Y Combinator Founding Partner Jessica Livingston, and Andela co-founder and President Christine Sass. Having said that, the Manara team have had their fair share of hurdles in getting the company off the ground- Montauk points out that one of the biggest challenges they faced early on was changing the mindset of talented young people from the region, especially from Gaza. "The candidates were talented and highly qualified, but did not believe in themselves, especially women who were not confident enough to even apply," she recalls. 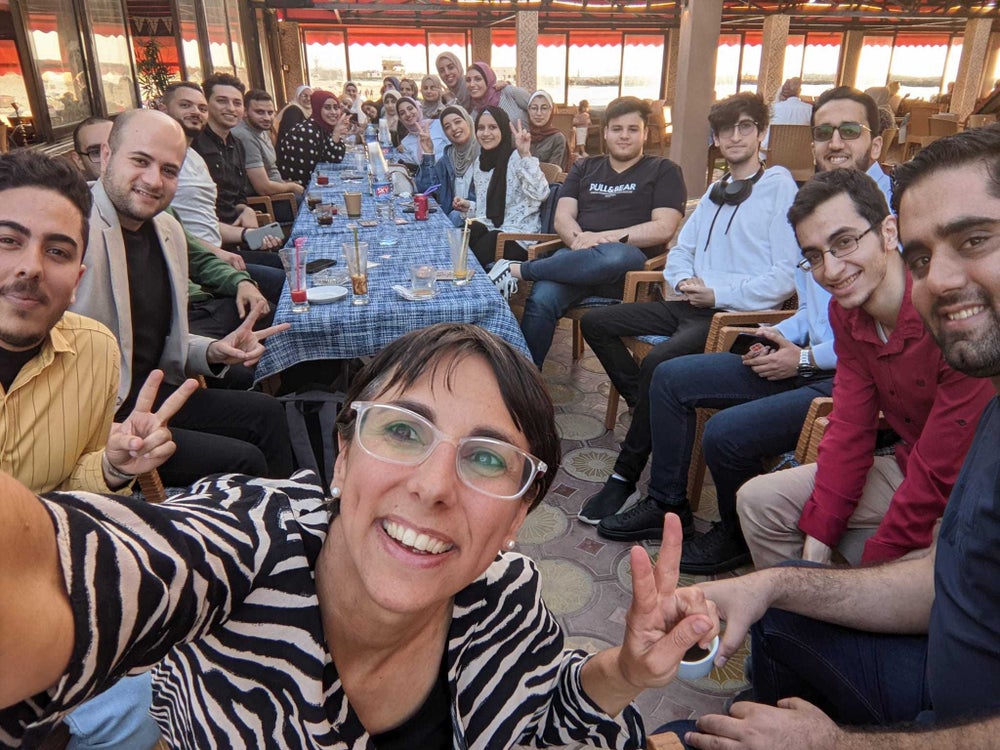 What turned this situation around was letting such talent see for themselves the success stories of people from their communities, as well as getting them to meet with people working at top tech companies. "As soon as they started meeting people from companies like Google through mentorship and mock interviews we arranged, they told us, 'I thought I'd have to be an extraordinary genius to work at Google, but that mentor was just a smart and normal person like me!'" Montauk says. "That's when we realized the power of engaging employees from the global tech sector. We've built a global community of engineers who jump in at just the right moments in a participant's journey to offer an hour of mentorship. Nailing this approach makes it possible to overcome the imposter syndrome."

Talking about the future, the duo states, "We found something that works- now, we are trying to reach more people." Besides having an eye on expanding the team, the co-founders are keen to grow Manara's cohort sizes and deliver quality solutions at scale, i.e. "to go from 60 engineers per year, to 6,000 engineers per year." In addition, they also plan to launch a self-service product for interview practice, networking, and mentorship that will, hopefully, reach more software engineers. "There's a high demand in the strong growing tech sector providing world-class jobs that engineers aren't able to get on their own, and that simultaneously, these companies aren't able to fulfil with the right engineers," Montauk concludes. "This is where Manara comes in."

1. CELEBRATE EVERY MILESTONE "Many times we set goals, and by the time we actually achieve them, they don't feel big enough anymore, and we miss out on all the celebrations. Always celebrate every milestone, both alone and as a team."

2. ENTREPRENEURSHIP IS TOUGH "It will always be harder than you think it is going to be. We tend to focus our energy on the challenges, but instead, we should make time to dream about what is possible."

Related: In It To Win It: Four Areas Entrepreneurs Need To Address To Ensure The Success Of Their Startups

Thinking Out Of The Box: Unilink Group Managing Director Manzoor Ali On Building A Successful Business Out Of Kuwait