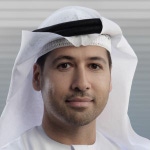 In his capacity as Chief Executive Officer of DIFC Authority, Arif Amiri oversees the strategic and operational functions of the centre. Under his leadership, DIFC has grown substantially and set out an ambitious 2024 Strategy, which will see it further enhance its position as the leading financial hub for the Middle East, Africa and South Asia (MEASA) region. Amiri’s vision for DIFC reflects the UAE’s commitment to innovation and economic diversification. As part of this vision, DIFC is further developing its fintech proposition and leading a number of initiatives to move the innovation agenda towards a broader conversation about the future of finance.

Before joining DIFC Authority, Amiri held a number of positions at Emaar Properties PJSC, where he drove the all-round commercial operations of the company and grew their portfolio significantly throughout his tenure. His career began with an eight-year term at HSBC Bank Middle East, where he was responsible for the implementation of a number of corporate and institutional banking initiatives. During this time, he established an in-depth understanding of the financial services sector, which continues to serve as a solid foundation for his role today. From 2008 to 2011, Amiri was the Chairman of the Middle East Investor Relations Society. Underlining his significant contribution to the region’s retail sector, Amiri received the Honorary Award at the Retail City Awards in 2011, and the Retail Leadership Award at the 2012 Asian Leadership awards.

Amiri holds a post-graduate executive diploma in organization behaviour and marketing strategy from the University of Cambridge, Dubai, as well as a bachelor’s degree in aviation business administration from the Embry-Riddle Aeronautical University in Florida.