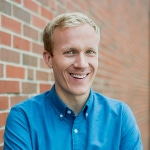 Chris Rannefors has pitched products on ABC's Shark Tank and been featured in Forbes 30 Under 30, Fast Company, CBS's Innovation Nation, etc. As a sales leader at Shopify, he empowers small business owners, and in his latest project, he's developing a fresh take on enablement for people leaders.

Don't Wait For a Lightbulb Business Idea to Come to You, Go Out There and Find It

Instead of waiting for that perfect idea to come to you, with a little bit of intention, commitment and planning, you can find it on your own terms.