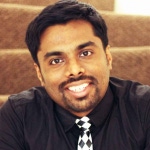 Karthik grew up in a small town in India and was a self-confessed geek from childhood. Learning to build a computer at the tender age of 15. Following an engineering degree, Karthik spent his early years in investment banking throughout India, Amsterdam and London representing multinational companies and going on to set up his own company within the industry.

Throughout this part of his career Karthik noticed a problem in the way people were being headhunted - a flaw in the UK recruitment industry. He went on to explore a new way of hiring where job-seekers could feel empowered and made to feel that they are an integral part of the hiring system. BeatMySalary was born in 2015, a system which promotes ethical and unbiased hiring principles, where job-seekers can submit real-time applications and have the chance to withdraw or amend applications at any time, putting them in total control of their data.

Are You Investing in The Right Hiring Solutions?

This is how an employer identify the right tools, technologies, recruitment consultants, staffing agencies to invest in

5 things that can bring a startup from 33,000 feet above the sea level to flat on the ground

Hiring the best employees for a job is probably the most important parameter for a company's success.