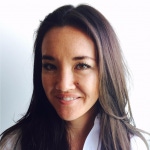 Kristin Wong-Ward is the founder of Rose & Pacific, an influencer agency based in Dubai. R&P works with digital influencers to help them build their businesses, expand their platforms, and increase revenue through partnerships. Kristin also produces television and digital content.

Before moving to Dubai, Kristin was a feature film and television executive in Los Angeles, California. She contributed to the story development, production, and marketing departments of one of the most successful film companies in Hollywood and built its digital division. She worked on films including Despicable Me, Hop, The Lorax, and Despicable Me 2, which have earned more than US$2 billion globally. Previously, Kristin worked at an A-list talent management firm, packaging and producing film and TV projects for all the major studios and production companies.

She maintains relationships in Los Angeles with the major studios, production and new media companies, film financiers, and representation agencies, providing a strong bridge between Hollywood and the growing entertainment sector in Dubai.

Kristin holds a Bachelor of Science degree in behavioral neuroscience from the University of California, Los Angeles. She speaks English, Spanish, and Mandarin Chinese.

In Defense Of Influencers: The Importance Of Protecting Your Personal Brand

Who's going to defend the interests of the digital influencers?