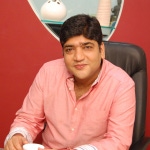 Mr. Sunjoy Waddhwa, the founder, promoter and producer of Sphereorigins is a graduate from HR college of commerce & economics, Mumbai. Having 15 years of enterpreneurial experience, Mr. Waddhwa has brought a businessman’s professionalism to a creative field.

He is instrumental in conceptualizing and creating shows that epitomized quality and has the best of talent from the film as well as the television industry in his team. He shares a good rapport with people who are an integral part of the film and television fraternity.

His television shows have been successful because they are combined with professionalism and creative integrity. His shows carry a distinct impression of his sensitivity as a maker.

This is apparent in his selection of strong story-lines, supported by competent talent, top of the line sets, portrayal of his characters and perfectly integrated team. Attention to details, meticulous planning and well-organized schedules, are the hallmarks of each of his productions, amply evident in the sitcoms, family dramas and costume dramas that he produces.

Mr. Waddhwa is the driving force behind the dynamic ideas.