By Colin Payne
March 28, 2014
This story originally appeared on Visual.ly

Promoting your business on social media successfully is a science -- one that often involves number crunching, data analysis and diligent tracking, trending and graphing. And while social-media managers and content strategists have yet to discover the formula for writing viral content, it isn't for lack of trying.

Headlines, for example, play a big part in shareability -- something the folks at marketing web-app company ripenn recently took to a whole new level with their analysis of the top words used in 2,616 viral headlines from four popular websites. They examined attributes like character count, presence of numerical values in the headline and social shares, making raw data public in a downloadable spreadsheet. The team at Buffer then took it a step further, adding 400 top headlines from 20 additional websites. (Their analysis is here.)

Before you begin running headline simulators and writing titles based on statistical averages, consider this: great headlines have been driving newsstand sales and making print publications "go viral" before the word ever existed. And a headline isn't the whole story. If you look at the most popular publications of the past and viral content of the present, you'll notice another key component of popular content: a great image.

Often, the marriage of a great headline with the perfect image -- or even a compelling image alone -- generates the most sales or traffic for a story. Let's take a walk through the past and present of best-selling content and look at some great examples.

The past in traditional media

For iconic visuals, few - if any - words are needed. A review of the top magazine covers from 1965 to 2005 by the American Society of Magazine Editors (ASME) reveals a number of best-selling covers that feature images alone: 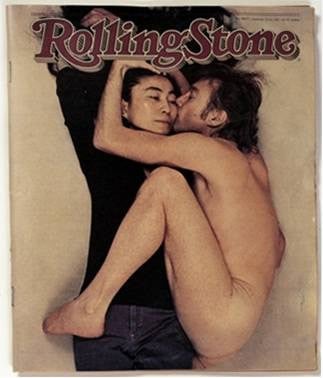 Rated as the top magazine cover in the latter half of the 20th century is this Annie Leibovitz photo taken just 12 hours before Lennon's death and published on the cover of Rolling Stone in the magazine's tribute to the music and counterculture icon. The image and celebrity appeal alone sold millions of copies.

Another Annie Liebovitz photograph of a naked and very pregnant Demi Moore - combined with a catchy headline playing on her name and nudity on the cover of Vanity Fair helped launch Moore's career and sold millions of magazine copies. The cover ranks No. 2 on ASME's list. 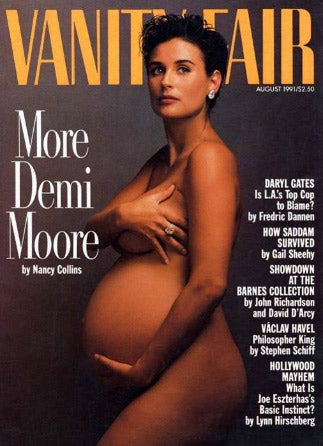 Rounding out the top three on ASME's list is this Esquire cover featuring boxer Muhammad Ali impaled by graphically imposed arrows, with the goal of showing him as a martyr after he refused to join the U.S. Army based on his religious beliefs and was subsequently stripped of his heavyweight title. The dominant image is accompanied by a diminutive headline "The Passion of Muhammad Ali," seemingly a take on "The Passion of the Christ" and the martyrdom of Jesus from the bible. 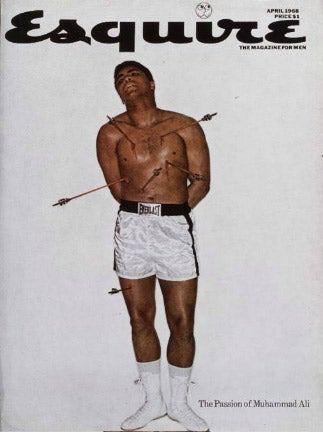 The present in social media

One thing these three top titles have in common is that they come from an era when photography was in the relative dark ages and the graphic arts still didn't have the aid of sophisticated technology. Today, digital cameras are in everyone's pocket and graphic designers have state-of-the-art tools at their disposal to create visuals that were unheard of even 20 years ago. As a result, we live in an increasingly visual culture -- and images are more important than ever to creating content that spreads like wildfire.

In a 2011 analysis of content performance on its platform, content-marketing software company Skyword found that total views increased by 94 percent if a published article contained a relevant photograph or infographic, compared to articles without an image in the same category.

The key to this statistic is that images relevant to your headline and content grab the viewer's attention and immediately engage them emotionally with your post -- making them more likely to click and share it with anyone they feel will also care about your content. That's the foundation of a viral post.

And great images, particularly those made by a professional with a distinctive style, can help you establish and build your brand, while connecting on a more meaningful level with your clients and prospective clients. (And don't forget the opportunity images present for search engine optimization when you use correct alt tags.)

A definitive list of the most viral content of all time or by year doesn't seem to exist on the web yet, but this below image was the most tweeted image prior to Ellen DeGeneres's Oscar shot. As you can see, it shows the powerful message an image alone can communicate on social media. For entrepreneurs to emulate this strategy, keep an eye out on your own feeds to see what's trending and what draws your own attention, making you want to feed the fire and share.