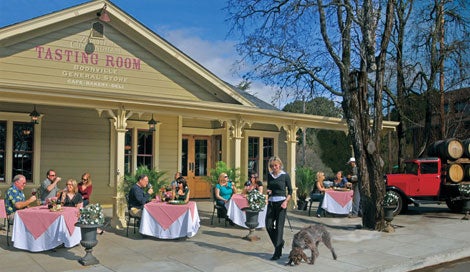 Zina Hyde Cunningham Winery is the product of four generations of great wine making. Zina got his start as a winemaker in 1862 after purchasing a 160-acre ranch in what is now the town of Windsor. He bought another ranch in Kenwood and later, drawn to the beauty of Mendocino County, started planting vineyards in Ukiah. His son William followed in his footsteps, and William's son, Lloyd, followed in his. Although life was good and prosperous for Zina and William, prohibition eventually shut down Lloyd from making more than the 200 gallons of wine allowed by the law for personal consumption.

Even though the winery and vineyards of his forefathers were gone and Lloyd was farming walnuts, prunes, apples, and pears, he still taught his son Bill the trade of making wine. But Lloyd wanted more for his son and encouraged him to get a good education. Bill became a teacher and later the assistant to the Governor of California for the Board of Education, but he never let go of his lifelong dream to make wine. In 2006, after encouragement from his cousin Steve Ledson, who had opened his own winery in Kenwood in 1999, Bill started planning the revival of the Cunningham family winery. Like his great-grandfather, he was drawn to Mendocino County. He decided on making his dream come true in Boonville, where he could source grapes from the sought after Anderson Valley.

Today Zina Hyde Cunningham Winery specializes in producing small lots of premium wines, including Sauvignon Blanc, Chardonnay, Pinot Noir, Carignane, Zinfandel, and Orange Muscat. Getting back into the business has been an adventure and has proven to be rewarding. As for accolades, the 2005 Anderson Valley Pinot Noir Reserve and the 2004 Anderson Valley Zinfandel Reserve were both awarded gold medals at the 2008 San Francisco Chronicle Wine Competition. Wine Enthusiast awarded the Zina Hyde Cunningham 2005 Reserve Pinot Noir 88 points and the 2004 Reserve Zinfandel 90 points. Now that's making family history.

Getting There:
Take Hwy 128 Mendocino/Boonville exit. Winery and tasting room are in downtown Boonville across the street from the Boonville Hotel.

4 Tips for Creators to Navigate Finances the Smart Way