Fighting The Status Quo: Lina Khalifeh Sets Out To End Violence Against Women With Her SheFighter Academy

In 2004, while at university, Lina Khalifeh came across a friend who had bruises on her face after suffering physical abuse from her father and brother. It was after seeing her friend's state, who, like many other abused women, felt they couldn't do anything to defend themselves, that Khalifeh decided to get started on a venture that would empower women -both physically and psychologically- through self-defense training. Khalifeh, who has more than 17 years of training in martial arts, has received several awards both nationally and internationally for her skills, and armed with that background, she started conducting self-defense classes from the basement of her parents' house to empower women. "I just wanted to solve a problem," she says. "I wanted women to stand up for themselves, and not just to defend themselves, [but] also to be financially independent, and have better self-confidence."

As Khalifeh's students grew in number, she initially considered it as a part-time job to her marketing role that saw her lead communications for a manufacturing business. Though she didn't know a lot about entrepreneurship then, Khalifeh took courses over various summers and weekends. After two years in development, which included partnering with different gyms and saving up "around JOD4,000 (US$5,000 approx.)," Khalifeh officially launched SheFighter in June 2012, which was the first self-defense studio for women in Jordan and Middle East.

"Nobody opens a self-defense and martial arts studio specifically for women; it's usually for men, and you have women's classes, or you have mixed classes, but there's nothing specifically for women," Khalifeh says, recalling her hesitation as the idea didn't receive much interest at first, having started with just 10 students signing up for classes. Khalifeh created a level system for SheFighter's trainees to enhance their skills, starting from beginner to intermediate, and all the way to advanced and professional levels. 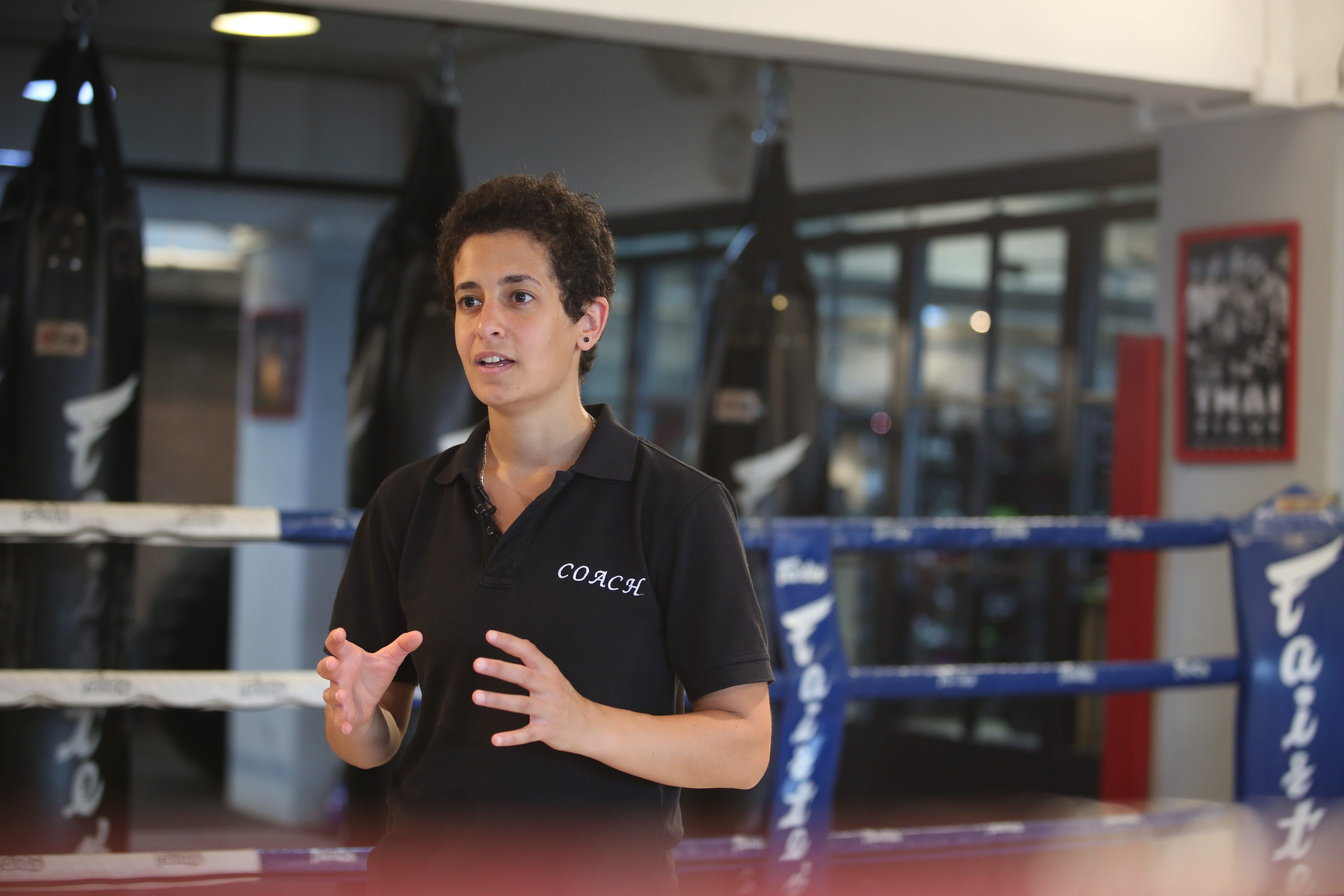 In 2014, she developed Training of Trainers (ToT) courses to diversify revenue streams. Training more than 15,000 women globally, they have given workshops and certified ToT courses in Canada, Washington D.C., US, Turkey, Czech Republic, Switzerland, France, Pakistan, Germany, UAE, Lebanon, Palestine, and 10 other countries across the world. It's grown from a studio into an academy, as SheFighter now conducts lectures and workshops on self-defense, overcoming sexual assaults, understanding body language, as well as women empowerment.

It has even had lawyers discussing about laws in Jordan concerning women, as well as building partnerships like its recent one with the Hussein Council Foundation to give free breast cancer tests. SheFighter has now moved into a larger space with around 20 employees at the studio, certified about 250 trainers, and in the midst of all that, Khalifeh was also declared as a "leader of social change" by former US President Barack Obama, at an event focusing on emerging global entrepreneurship at the White House.

As a social enterprise, Khalifeh says that SheFighter runs on a hybrid business model, balancing its social mission and commercial profit. On the social impact side, SheFighter has partnered with different NGOs in Jordan and Europe for social development projects focusing on Syrian refugees, orphans, women with disabilities and rural areas. The academy has yearly projects with Syrian refugees, having trained more than 2,000 Syrian refugees, with more partnerships on the way.

As for its revenue-generating front, besides its ToT courses, gyms and martial arts centers also pay a licensing fee to utilize SheFighter's equipment, trainers, and anything else they need. The company has also started a franchise system this year- with its first branch in Ramallah, Palestine, launched in June, and an upcoming one in Hong Kong next year. Given its growth trajectory, when asked whether she's considered seeking external funding, Khalifeh says that besides a "small funding" they've used for marketing, they haven't considered it. 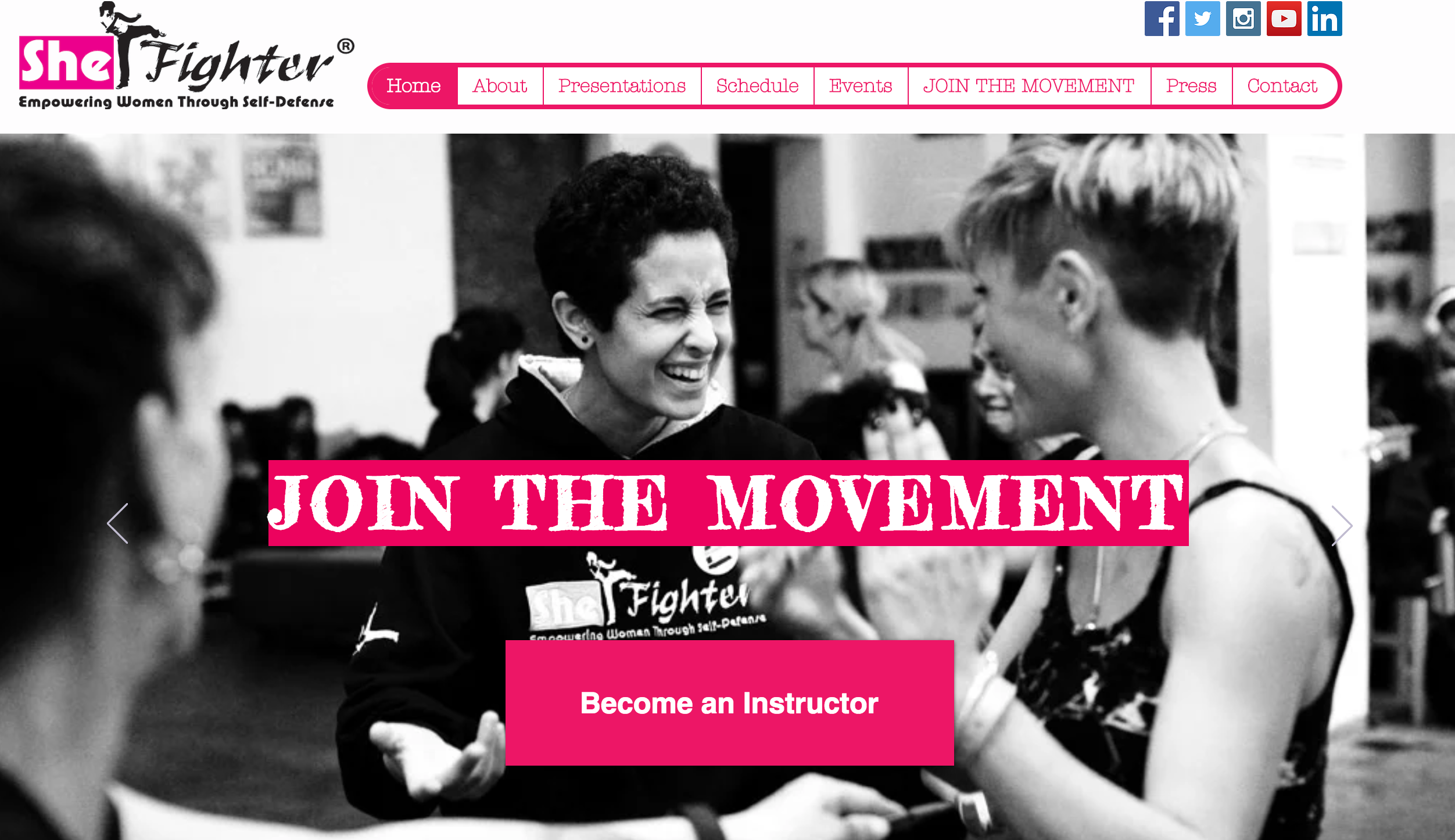 "I have met with many investors, but I didn't really find the right investor," Khalifeh notes. "I don't think we only need money to expand, we need knowledge and information as well… I always partner up with entities, but discussing it with the investors, they must be open-minded about the idea of women empowerment. Because, usually, they are more concerned with technology, and they're looking for fast money- they don't think it's more about spreading awareness. It takes time, there are a lot of challenges, and this is a women empowerment business, so you have to have the right partners."

As SheFighter continues to scale, Khalifeh notes that the company has also had its fair share of challenges. One of the obstacles Khalifeh has been facing are rising taxes for She- Fighter, which are increasing for fitness centers and educational centers in Jordan. Legal issues are also something she and her team have to tackle, most of which arise because as some of the girls and women learn self-defense, their husbands or fathers aren't for it.

"We're still in a male-dominated society," Khalifeh notes. "Some of the members even lie to their parents about training with us, they only tell them they're going to the gym, but the truth is, they come to SheFighter." When such cases arise, Khalifeh says that it's important to have an open mind, and whenever she'd get involved in such matters, she would often invite the male guardian to discuss, and get them to understand that SheFighter provides a safe atmosphere that allows women to empower themselves. According to Khalifeh, SheFighter is still suffering from the notion that selfdefense classes aren't meant for women. At an event in Jordan some time ago, Khalifeh was told, "'you cannot solve violence with violence.' And I told them: "This is called self-defense! We have hundreds of martial arts studios for boys; nobody ever told them that this is violence. But when you have one studio that is just specifically for girls, now you tell me, [we're teaching] girls how to be violent?'"

Khalifeh notes that it's often in the Middle East that she has to face these kind of criticisms, which is starkly different to the feedback SheFighter gets in other countries, like, say, Hong Kong, Switzerland, and the Netherlands. And it's the positive feedback that makes all the difference- especially when she's at the lowest of moments, Khalifeh says. From hearing stories of how a seven-year-old girl stood up to a bully, to teenagers and adults who feel confident of knowing what to do on situations that may need them to use their training, Khalifeh says, "I feel really happy that these little girls are being empowered. I'm always happy with the impact that I'm giving to the society." 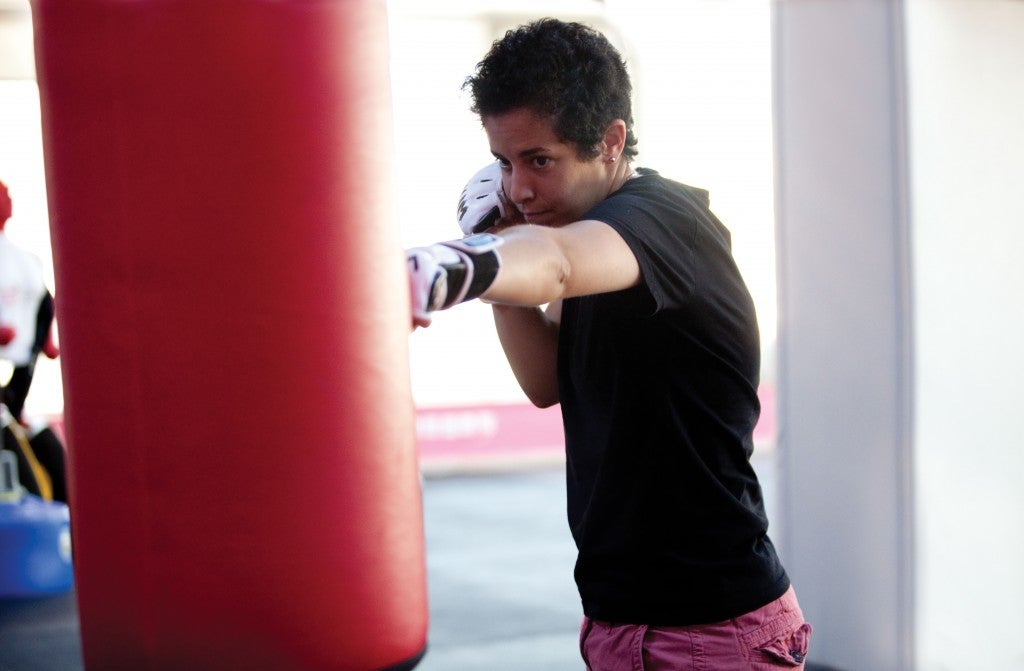 Looking back at her entrepreneurial journey, Khalifeh recalls her hesitation as she considered the risks when starting up SheFighter. She was in her early 20s then, and at the time, she felt there wasn't much support for young entrepreneurs, and that it was smarter to gain work experience first, and then, later on, start a venture of her own. But a friend gave Khalifeh a different perspective on things. "He told me, "If you don't start now, you will never start. And if you start later, will you have the energy for all of this? Start now in your early 20s.' And I told him, "I don't have enough knowledge,' and he told me, "It's okay, start [and], you'll get knowledge later on.' I thought about it, [and I realized], I don't have anything to risk, to lose. And if I fail, it's fine, I'll learn. So that's how I usually look at things. You start; you're not perfect. You don't even have to have degrees in different fields; you just start and learn through the process."

And this is the same philosophy Khalifeh uses to grow SheFighter. "It's a learning journey, and if you fail or face challenges, it's actually also a learning [instance] for you to solve that problem. There's always problems, and there's always solutions. It's just how to get to the right solution." With a mission of getting SheFighter licensed in 5,000 locations, and a minimum of a hundred SheFighter branches per country, it's clear that Khalifeh has a grand vision for herself and her enterprise. "I want to train women globally," she declares.

THE PITFALLS OF SEEKING INVESTMENT TOO EARLY AS A SOCIAL ENTERPRISE

"Don't think that a social venture has to be funded all the time. [First], they have to make money. If they can't make money by themselves, then it's not going to be sustainable. They have to think about funding all the time. Don't focus about getting investors in the beginning, focus on how you can make money. If they can succeed on doing so, then later on, they can easily attract investors, funding agencies- you can attract anybody. But they have to prove that it's actually working. Their main problem is actually, they just start the idea and directly say, 'We want an investor!' But who would want to invest in a business that isn't effective? Look for investors after a while, but not in [your] early stages- you need to prove that it's working." THE BIGGEST LESSON FROM BEING AN ENTREPRENEUR

"I learned that even if you're young, small, tiny, or whatever, you can still have an impact on anybody. You still have a voice. I learned that if you believe in what you do, if you have a passion for it, you can make miracles happen. So that's [one of my biggest lessons] on a personal level, and how I see SheFighter going. I never have boundaries. I am always looking for the next step, and usually have the image [of the goal] before getting there. I visualize everything ahead and I make it happen. So, it's just believing in what you do, and focusing on it. Do not think about failure. Be open to new ideas."