By Pamella de Leon
August 9, 2015
Opinions expressed by Entrepreneur contributors are their own.
You're reading Entrepreneur Middle East, an international franchise of Entrepreneur Media.

The Media Network (TMN) declares itself to be "the first communications platform in the Middle East providing essential industry tools for journalists, PRs and marketing professionals." While co-founders Jill Downie and Michelle Kuehn agree that while they still consider TMN to be a startup, they do believe that they're "growing stronger all the time, and the positive feedback that we receive is really encouraging; it really keeps the excitement and motivation going for the team."

Downie and Kuehn gave us a few minutes of their time to talk challenges, goals and expansion plans for their business. Downie says that an entrepreneur can be described as "driven, focused and a risk-taker," while Kuehn sees an entrepreneur as being "determined, innovative and flexible." On addressing the MENA region's gender gap in entrepreneurial space, Downie is adamant that "it ultimately comes down to education and encouragement from an early age. Women must be encouraged to not only pursue a career, but ensure it's one that they are passionate about." Kuehn views the region's "gender disparity as a thing of the past. With the growing number of opportunities and the shrinking gap, it's no longer so much about gender, but about vision and perseverance."

What are your respective sources of personal motivation?

Downie: I like problem solving, so I normally come up with business ideas that are related to a problem I have encountered within my personal life or professional career. I like to find niches in the market– things that haven't been done or haven't been executed in the best possible way.

Kuehn: I am incredibly thorough and like to do things exactly right; I'm slightly OCD in that sense and feel that if something isn't done right then it shouldn't be done at all. So, from a business perspective, I'm motivated to complete everything to the highest standard. I want to look back one day and feel proud to say that I created something and that it was worth it. I'm not a control freak, but there's nothing more satisfying than building something from the ground and seeing it succeed – something I've molded and watched grow. When it's your own, it becomes so much more than just work.

What would you say is the region's biggest challenge for entrepreneurs?

Downie: While not the biggest challenge, one of the first stumbling blocks that entrepreneurs face over here is the actual process of setting up a company. Although it may have improved in recent years, it is not an easy process. Information is not as readily available as you may think – it would be great to have an impartial advisory centre to help establish the best options for new business registration and offer realistic cost estimates and logistical assistance.

Kuehn: Support, or lack thereof. This extends from banking to registering. Additionally, because a strong appearance is everything in business, even though you might have a great idea and be really great at what you do – without proper financial support, you will struggle to portray the image that the market may expect to see. Working from home is smart and economical for start-ups, but it is difficult to set up here without expensive office space.

Downie: The co-founders of Dubizzle, Sim Whatley and J.C. Butler, are a great example of entrepreneurs who found an untapped market in the region and built a successful business around something that people would actually benefit from, and executed it with fantastic customer service. As for the rest of the world, Mark Zuckerberg is one entrepreneur who needs no introduction. What I find most impressive about the guy is that even with the entrepreneurial success and influence he has gained, he remains remarkably understated. Not only is this an admirable quality in a person, but as a pioneer in the social media industry, his continued focus on improving his brand shows a truly committed entrepreneur.

Kuehn: For the region, I'd say May Habib, founder of Qordoba.com. She identified a real gap in the market in the form of quality Arabic translations, took the internet that mixed with a vastly diverse population in the UAE, and built a business model that is not only modern, but satisfies a basic business need. In North America, it would be Sam Walton, Founder of Walmart. His vision was great because he was just an average guy who used his money from the army to buy his first retail franchise, and after building up the chain and becoming frustrated by the company's management, took his experience in the market and struck out on his own– again. He then created a system of large discount stores in rural areas, something that was unheard of in retail at the time. I admire his ability to observe flaws and turn them into his company's strengths, as well as having the gall to go against long-established retail brands with his ideas. But he's always been flexible. There may be negatives surrounding such a large retailer (ranked the most successful company in the world in 2010), but surprisingly they still have the flexibility of an entrepreneur's mind. If something isn't working, they will consider change.

What made you decide to pursue business endeavors in the Middle East? How do you feel that you best reach your target market?

Downie: I came here with my career in journalism in 2004 and started seeing gaps in the market almost as soon as I arrived. Essential tools in terms of media communication and productivity were just not available in the region, and after years of meaning to do it, my business partner and myself decided that it was now or never, so we launched The Media Network in September 2013. We reach our target market by having lived and worked in the industry– we understand our audience. We have an insider's knowledge about their needs and want to streamline the process to make working life easier for all involved. Obviously, building up wide connections over the last 10 years has also helped.

Kuehn: I first moved to Muscat when I was 15 and completed my first two years of university at American University of Sharjah a few years later. Ever since then, I've felt completely attached to the region and have been moving back and forth for the last 15 years– so there was really no other place that I would want to launch a business. The Middle East is a place I feel connected to and one that I hold a true understanding of, so this combined with my experience in events, marketing and PR made it an easy decision. 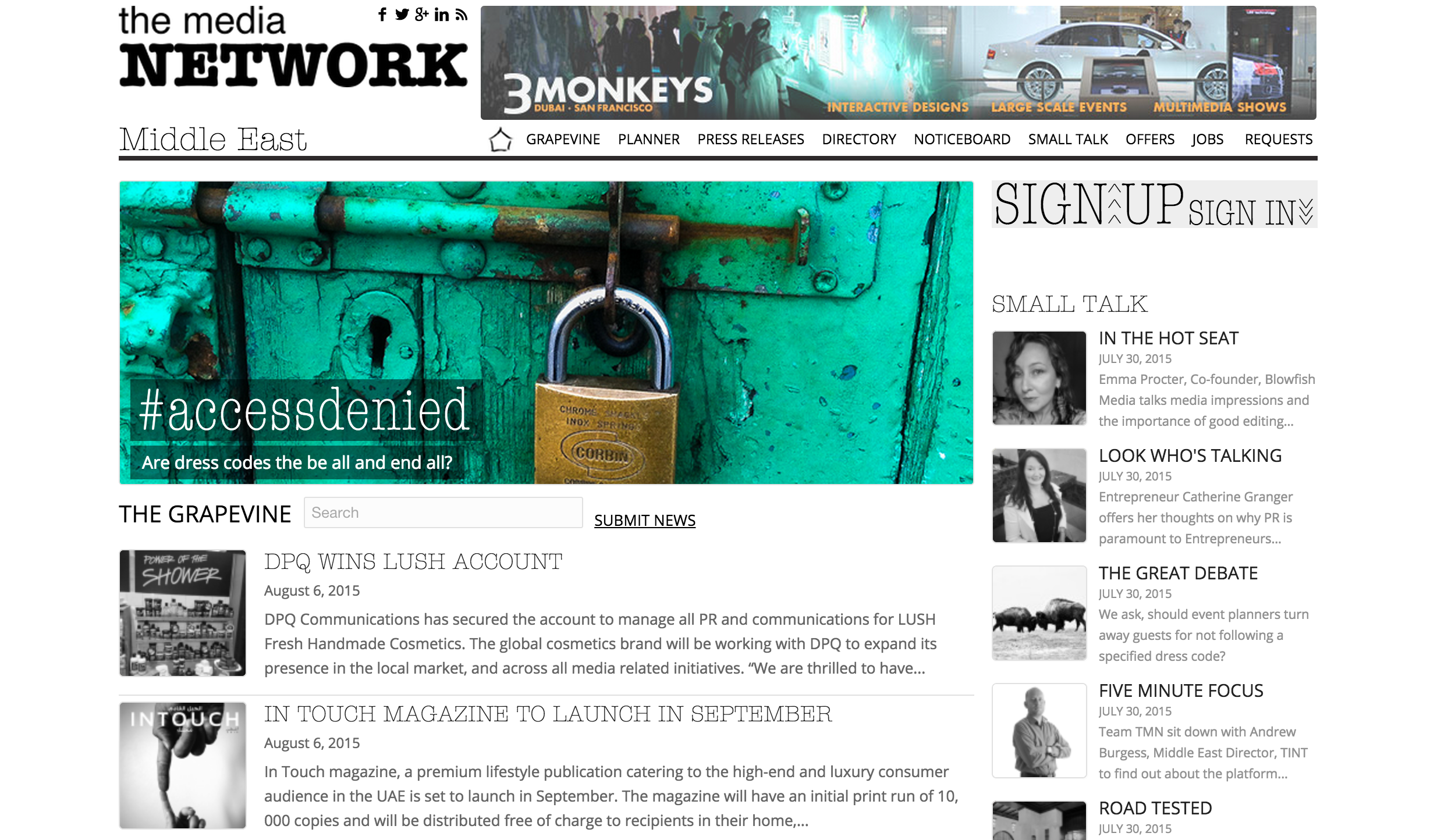 What moment in your career was the most discouraging?

Downie: I had planned on launching an online business back in 2008. I'd resigned from my job as a magazine editor, but with the sudden recession hitting globally, it was clear it was not the best time to launch. Sometimes you have to know when to let go, and recognize when to move on in order to move up. If that had been my only business idea, I would have been back in a job in days. It's all about timing, and sometimes you have to put things on the back burner– if you're secure in your abilities and goals, it will work out.

Kuehn: There was a time when I was the Interim Manager for several months when my boss left. I applied and interviewed for the position, and worked overtime to develop the role and myself. I was also the only trained individual in the company for the position. But, not only did I not get the position, I had to train the person who did. I trained her successfully and soon after, applied for a role in a different department. This was my first department management position, supervising 30 members of staff; it hugely contributed to my development, and made the whole debacle seem minute.

What moment in your career did you feel that you'd finally "made it"?

Downie: I look at each stepping-stone and I'm excited for every one we reach. We recognize our accomplishments, but I don't think anyone ever really thinks they've "made it'. I think entrepreneurs always have their eyes firmly set on the next prize.

Kuehn: Does anyone ever think they have truly "made it'? We have big ambitions and there is so much more for us to accomplish – and learn.

How much "risk-taking" personality characteristic is involved in being an entrepreneur?

Downie: Success doesn't come without a certain amount of risk. But while a degree of risk will be involved, it's important to ensure that it is calculated. It goes without saying that the bigger risk you are willing to take, the bigger the chance of success– and of failure; it's about spreading the risk to a minimum and never putting yourself in a vulnerable position where one of your investments could jeopardize you.

Kuehn: I don't see myself as either extremely cautious or risky. I like to believe I am more of a realist, that I know when to pull back the reins and only like taking calculated risks. The biggest risk every entrepreneur takes is the moment when it is time to take the plunge. I firmly believe that if you are making the right choice to branch out on your own, you will feel like vomiting for most of the first year– it is risky but it's right. But I don't believe entrepreneurs need to have a risk-taking tendency, just a strong sense of self and not being afraid of hard work.