Abdulwahed Juma has been blessed with the gift of the gab, and it's something that definitely works in his favor in his role as the Executive Vice President of Brand and Corporate Communications at UAE telco du. Not only does he have an extremely affable personality, Juma has a remarkable sense of humor (the audio recording of the chat I had with him has moments that are filled with just my uproarious laughs at his jokes), which, when combined with his genuine interest in making conversation, makes this Emirati executive a very easy person to talk and relate with. As such, it should come as no surprise then that the brand he represents espouses these values as well- it's easy to see that du has taken on a very humanistic approach to the way it markets itself, and Juma agrees that that this is something that has helped the company get to where it is today. "du, as a brand, is a success story," he says. "It's rare that you find a local brand start in an overly penetrated market, and in less than 15 years, become one of the top brands in the country, valued at US$6.45 billion. Besides how we started, how we went about serving our customers, and other such factors, the way we positioned ourselves, as a young, fast, funny, and agile brand, has definitely contributed to our success."

Juma's comments allude to the rather entrepreneurial beginnings of du in the UAE- in 2007, when it launched, the telecom landscape was, until that point in time, dominated by only a single player. In the years since, du has built itself up to become a business to reckon with, offering everything from data packages to security solutions, (in February this year, the company reported its revenue in 2018 had risen by 3.2% to $3.65 billion), and enjoying today a rather enviable brand recall in the UAE. But the ubiquitous nature of the brand has come with trials of its own for Juma, who was appointed to his role at du in 2017. "Joining a company like du, which has seen more than 11 years of successful operation, is in itself a challenge," he says. "Because when you join a brand that's not doing well, it's easier to fix things- no matter where you put your hand onto, you'll be aiding it. But when you join a very solid brand, a brand that has already made it, then it's much more difficult to do that, as you need to put things in perspective." It is thus to Juma's credit that during his time at the company, du has, through its various branding efforts and initiatives, continued to both stick to and build on its vision to enhance all aspects of their customer's lives. For instance, du's award-winning Post Wisely campaign was conceptualized in response to the digitally active lifestyles that people increasingly lead today, and the company has used its standing in the market to impress upon consumers the importance of maintaining a moral compass when sharing information online. In a similar fashion, du's recent Our Business Is Trust campaign, catered toward both large and small enterprises in the UAE, is an indication of how the brand is paying attention to the current sentiment in professional circles, and thus making its presence felt in the business arena as well.

These are just two examples, of course, but they do give an indication of the philosophy that governs du's efforts in the marketing domain- yes, the company is, of course, keen on driving sales for itself, but its messaging isn't going to be concentrated on just that. du is keen on being seen as a brand that's there for everyone in the UAE, Juma says, and as such, humanizing itself is an integral part of its marketing strategy- as an example, just look at the youthful, responsive voice that du has adopted for its social media channels. This strategy extends into the events and initiatives that du allies itself with as well- let me acknowledge here, in the spirit of full disclosure, that du has been a key partner for Entrepreneur Middle East ever since we launched, and this is a reflection of the company keeping a tab on trends in the region, wherein it noted not just the growing popularity of entrepreneurship here, but also the importance of these new companies starting up for its own future prospects. When I ask Juma how he goes about explaining the return on investment (ROI) on the startup support initiatives that du associates itself with, he replies that a long-term perspective is needed to understand the reasoning for the same. "Well, people always question the intention of companies when they don't see a clear ROI," Juma explains. "In the case of branding and marketing, sometimes, it's a long-term strategy, rather than a very short-term strategy. At du, we see our support of startups as part of our personalities- it's part of our embedded personalities, within the society that we are in. That's our brand's look and feel, and that's how we position ourselves as a brand. As for the ROI: let's assume that we are supporting hundreds of companies. Even if a small percentage of them make it into a mega company, that's our ROI. A company that started today with a handful of employees can grow into a huge company that will need data solutions, security solutions, etc. And when that happens, that company won't be worrying about savings on costs when deciding to award its contracts- they will think about the brand that was supporting them, ever since they started, to where they are today. That's a relationship that a generation cannot break. That's the ROI."

At this point, I decide to ask Juma about a very specific communications problem faced by people in the UAE, which is the blockage on Skype's use in the country- note here that it's the UAE's Telecommunications Regulatory Authority that has imposed this ban on Skype and other VoIP services like it, and as such, telcos like du are obliged to abide by it. But, as a company that has often declared that being connected is a basic human right, how does du reconcile itself with the fact that a rather popular form of communication in the world at large is not allowed in the UAE? "I agree that connectivity is a basic human right, but let's not mix connectivity with Skype," Juma replies. "Also, we've now got alternative options with apps like C'ME and BOTIM, which are programs that have been licensed and meet the minimum security requirements that we have to have as an operator. As an operator, we feel we have a responsibility to you, the user, about your data, about your information- of course, now, there will be someone out there who says that they don't care about this, and they're willing to take on the risk, if any, of using a service like Skype. And I'd tell him or her, well, would you follow the same principle if you're going for, say, heart surgery? Would you let amateurs play with your heart? It's exactly the same metaphor. If you don't care, somebody should care on your behalf. In this particular case, we care about your privacy. We care about your information, we care about any breach of that information… If something were to go wrong, the first complaint would be to us- that we didn't our job right, or that we didn't protect you enough." Juma also points toward how good connectivity actually is in the UAE, when compared with offerings in other countries around the world- one cannot deny that those of us here have been blessed with benefits that other nations are still struggling to put into place for their residents and citizens. At the same time, Juma also notes that there are reports saying that conversations are ongoing between parties to lift the ban on services like Skype in the UAE, and so, solving this particular issue is indeed a work in progress- perhaps one just needs to wait only a little longer for this to be resolved. 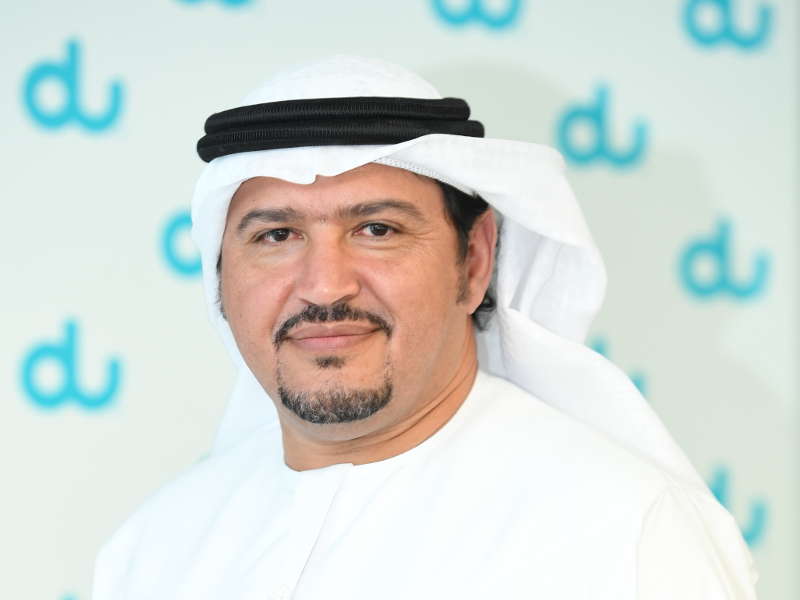 Juma's response on the Skype issue is indicative of du's openness to change, and how it's adapting itself to operate in line with the demands of the market in the UAE today. As for the years ahead, Juma believes that du is going to undergo a transformation from being a telecommunications company, to becoming a technology company- and this is a process that has already begun. Consider, for instance, du's strategic partnership with Smart Dubai, the government initiative working to make the Emirate "the world's smartest and happiest city." In addition to making use of all of the data and know-how it has accumulated over the years, du's expertise in smart city infrastructure and fostering entrepreneurship and innovation is enabling the realization of the outcomes that Smart Dubai has been envisioning. Be it by using its data to predict people's behaviors, or by providing knowledge that allow sound decisions to be made, Juma believes a paradigm shift to be in the offing for du. "Instead of being telco providers or telco operators, we'll be becoming solution providers and technology providers," Juma says. Now, this is certainly a forward-thinking approach for a telco, but one that is very characteristic of the way du works- it's never been interested in following the status quo. This particular characteristic can be seen in the manner du responds to critiques and complaints on its social channels- regardless of how unreasonable they may be, the replies are always polite, and attempting to fix the problem at hand. "We don't believe in shutting down or silencing the voices of people who are complaining against you," Juma says. "We see this as a feedback, no matter how negative it is, no matter how angry, no matter how aggressive. We see it as a feedback, and we see it as an area of improvement. Today, if you as a company believe that you don't have any area of improvement, then that's where you start declining and dying eventually. We believe, as a philosophy of work, that we always have an area for improvement."

According to Juma, it's this kind of attitude that sets du apart as a telco in the UAE, and when asked about his thoughts on the competition, his humor comes to the fore in his reply. "Well, we look at what they are doing… and then try not to do it!" he laughs. On a more serious note though, Juma says that when it comes to competition, it's not just the other telco provider that du is trying to get a leg up on. "We envision the competition in a different way," he says. "We compete with Uber. We compete with Deliveroo. We compete with Talabat. We're competing with any enterprise that gives you a good experience, because, as a brand that's human-centric and service-centric, we know that consumers will remember the last best experience that they had. So, for instance, if you've had a good experience with Uber, we want it to be comparable with the interaction you have at one of our call centers at du. So, if we want to be the best in class, then we need to be able to compete with anyone who provides you with a good experience. We want to get a stage where we'll have people say, oh, this brand's service is not as good as du. That's where we see ourselves, and that's what we are striving for."