The majority of the US$1 trillion investment that has been earmarked for developing the Saudi tourism economy to date has been deployed for this leisure segment.

Leisure tourism is the newest frontier in Saudi Arabia. The majority of the US$1 trillion investment that has been earmarked for developing the Saudi tourism economy to date has been deployed for this leisure segment. There are several mega-projects (projects with investment values over $1 billion) and giga-projects (projects with investment values over $10 billion) announced amounting to over $550 billion worth of exciting tourism destinations all coming online by 2030.

In 2019, Saudi Arabia was able to achieve 45 million tourist visits, of which approximately 18 million were leisure visits. In the same year, Saudia, the Kingdom's national carrier, facilitated the arrival of 36.9 million passengers. The Kingdom aims not only to attract more domestic tourism within its own borders, but to attract more foreigners to explore what Saudi Arabia has on offer. This entails a two-pronged strategy. On one hand, it is about targeting potential leisure travelers from around the world to consider a trip to Saudi Arabia for the first time. On the other hand, it's about enticing business and religious travelers already traveling to the Kingdom to extend their stay to explore the country in a way they hadn't considered before.

So what falls under leisure tourism? It turns out, everything that isn't professional and work-related, or religious, falls under leisure. This includes a weekend music festival, a visit to an UNESCO world heritage site at Al'Ula, a walking tour of a city, catching the F1 Grand Prix, or simply a vacation or staycation at a beach resort. Anything that helps you take a break from the normal routine of life would fall into this category, which is why sports and entertainment are significant contributors to this tourism segment. If you were to pay for tickets to watch a live football match or comedy show or the Orchestra in Saudi Arabia, and it required you to travel into the host city to attend the event - this would be considered a leisure tourism visit. A weekend in Aseer and the Arabian Highlands would count as well, as would a day playing golf at one of the championship golf courses being built along the shores of the Red Sea, or a day spent at the world's largest Six Flags Amusement Park in Qiddiya.

Related: In Focus: Religious Tourism In The Kingdom Of Saudi Arabia 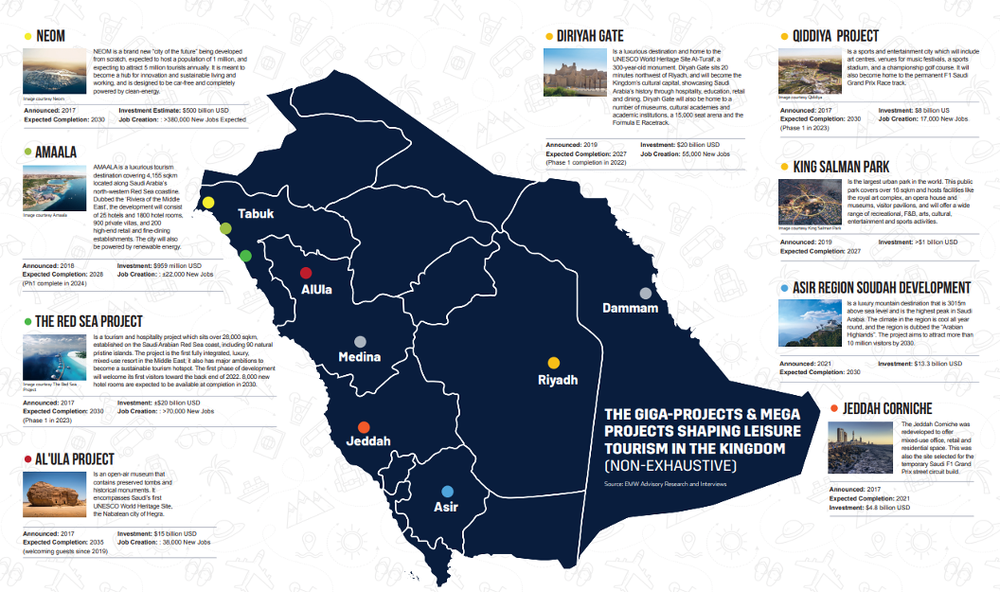 In 2019, 18 million leisure visits were logged in the Kingdom, out of a total 45 million visits encompassing leisure, religious, business and VFR tourism. By 2030, Saudi Arabia will need to grow that figure by more than 2.2 times to achieve 100 million visits total- of which the Saudi Ministry of Tourism is banking on the vast majority coming from leisure tourism visits. The Saudi government seems confident in this, as their investments in both tourism as well as in sports and entertainment continues to grow. In October 2021, it was announced that an additional $1 trillion would be invested in the tourism sector within the next decade. No doubt, many of these investments will be going towards building leisure, cultural, adventure, sports and entertainment activities in the Kingdom where tourism dollars can be spent.

The Saudi Tourism Authority (STA) is amongst the many stakeholders driving the national tourism strategy in the Kingdom. They told us that despite border closures certainly impacting Saudi's international tourism ambitions, efforts were quickly made to pivot and focus the attention towards attracting domestic tourists to its newly minted leisure destinations and UNESCO World Heritage sites originally developed with a keen focus on attracting foreign tourists. The 100 million visits Saudi Arabia is aiming to attract by 2030 includes both domestic and inbound (international) travel across all categories (i.e. leisure, business, visiting friends and relatives, and religious tourism). Thus, the carefully curated destination offerings were re-evaluated, re-packaged and marketed to the local Saudi population with great success. The STA tells us that in 2022, they expect 20 million domestic leisure visits and 4 million international visits, contributing to SAR54 billion in visitor spend. In a recent poll, the STA found that 79% of Saudi nationals were now considering taking a domestic holiday to one of the many tourism offers inside the Kingdom for their next holiday- rather than flying their families outside the country.

Over the past few years, in preparation for the 2019 launch of tourism visas to Saudi Arabia, 60 high potential tourism sites were identified for development, as part of a wider national tourism strategy. Many of the giga and megaprojects announced in the tourism sector over the years are developments around these high-potential tourism sites, such as Al'Ula and Qiddiya. The National Tourism Strategy also has identified over 500 complimentary tourist sites worth a detour to elevate the overall tourism experience in the Kingdom. The goal for the Kingdom is to have seven separate destinations with nearly 40 tourism sites ready for the public to pick and choose from by the end of 2022. The seven destinations focus on bringing culture and heritage offerings, adventure offerings, entertainment and shopping, as well as sun and sand relaxation offerings to tourists. The seven destinations include Riyadh, Jeddah, and Dammam -which are regular city-stops for business travelers to Saudi Arabia- Medina, Al'Ula, Al Jowf and Hail, and Al Bahah regions. Visitor centers and related infrastructure are all in development across these areas in expectation of more visitors to come.

In May 2021, the United Nations World Tourism Organization (UNWTO) opened its first Middle East regional office, and chose Riyadh as its home. United Nations Secretary-General António Guterres congratulated UNWTO on the occasion, saying "I believe that this Office will help the Middle East region recover its tourism sector, as well as support the growth of rural tourism development worldwide."