Opening Up To The World: Saudi Arabia's Tourism Goals

Gateway industries such as tourism, local manufacturing and smart services are generating jobs for future Saudi youth –and for the first time– opening Saudi Arabia to the world.

This article is a part of Bringing the World to Saudi, a special report sponsored by Saudia and developed by Entrepreneur Middle East in partnership with Lucidity Insights.

In 2016, the Kingdom of Saudi Arabia announced that it was embarking on a unique and transformative economic and social reform called Saudi Vision 2030 that would open up Saudi Arabia to the world.

Vision 2030 is a deeply ambitious plan to unlock the Kingdom's vast potential, by creating a diversified, innovative, and world-leading nation. It has been designed to free the Kingdom from its dependence on oil exports, ushering in a new era of economic diversification and opportunity, driven by investment into key strategic sectors. 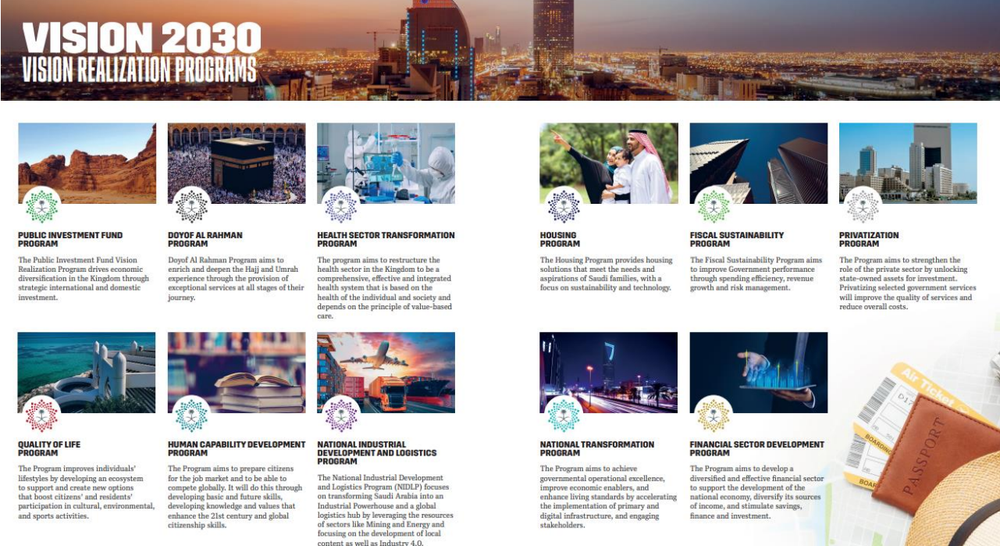 Vision 2030 works on three major areas of focus: creating a vibrant society, developing a thriving economy, and ensuring an ambitious nation. To shed light on just how far-reaching the implications of implementing the strategy across the country, here is just a small sample of the many ambitions set out in the Vision 2030: 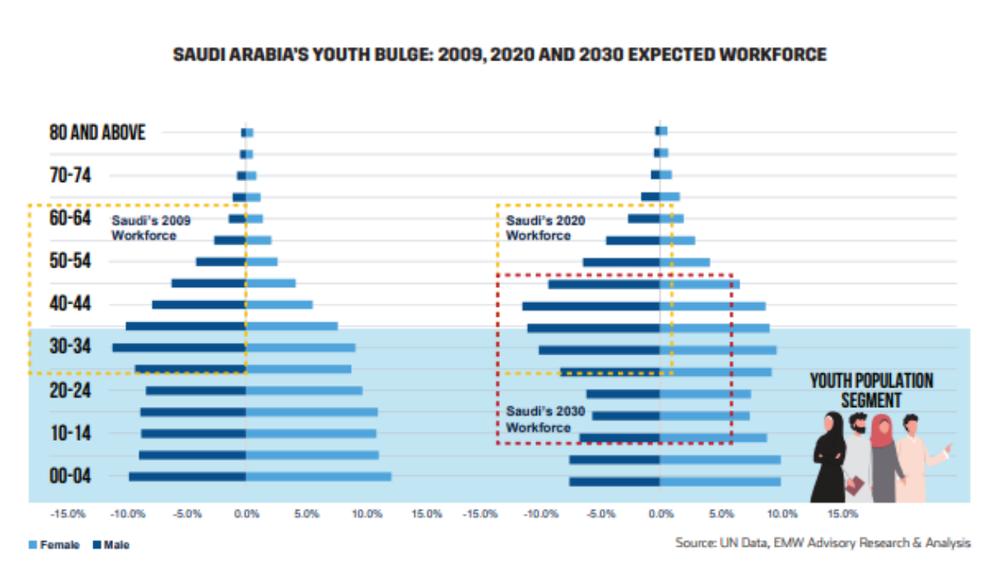 To achieve the Vision 2030 objectives, a series of programs have been designed to translate the Vision's aims into action. These Vision Realization Programs act to bring key deliverables of the blueprint to life, in wide-ranging areas from fiscal sustainability to Saudi citizen's quality of life. Five years has passed since launching Vision 2030, and the Kingdom has delivered a wave of reforms that have transformed society, with particular benefits to women and youth, and economy– accelerating the growth of the non-oil economy. Gateway industries such as tourism, local manufacturing and smart services are generating jobs for future Saudi youth –and for the first time– opening Saudi Arabia to the world.

OPENING SAUDI ARABIA UP TO THE WORLD

One of the key strategic sectors for development mapped out in Saudi's Vision 2030 is tourism. By 2030, the Kingdom expects tourism to account for 10% of GDP (up from the current 3%), creating a new tourism economy in the Kingdom that will generate at least one million new jobs for Saudi youth. 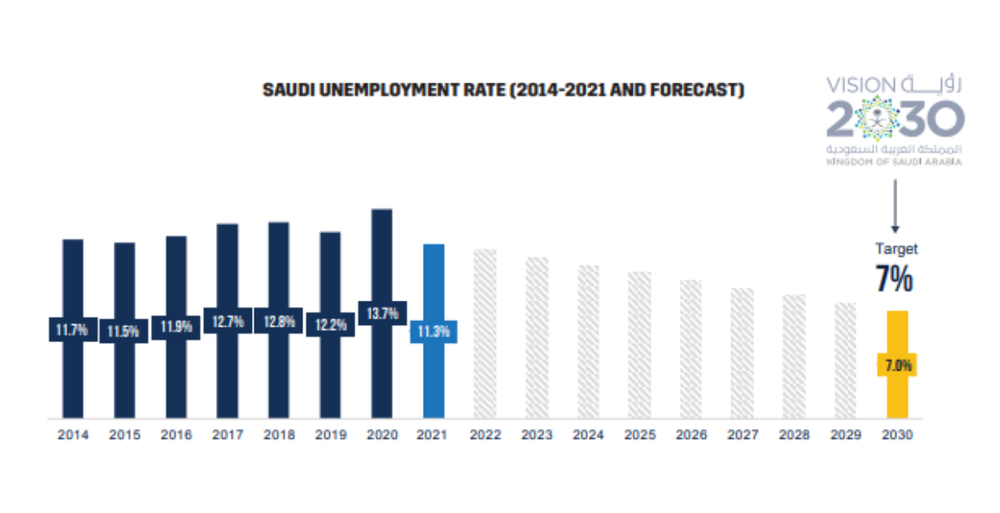 Job creation is a critical strategic driver for the Kingdom and underpins many of the strategic objectives outlined in Vision 2030, as Saudi Arabia is a youthful population with what economists call a "youth bulge". This refers to the incoming young Saudis graduating from secondary and tertiary education that will be hungry for jobs– in a job market that needs to more than double the number of jobs available since 2016 by 2030, the number of jobs available in Saudi Arabia needs to increase even more significantly, when we consider the successful drive for Saudi to engage women in the workforce. In 2010, only 55,000 Saudi women were participating in the private sector workforce; at the end of 2021, nearly one million Saudi women were working in the private sector, and the percentage of women in the workforce is climbing steadily. In 2016, only 19% of the workforce in Saudi were women. In 2021, that number has climbed to over 34%.

There are many stakeholders responsible for stewarding the National Tourism Development Strategy in Saudi Arabia. All are working together to coordinate strategic implementation of initiatives to achieve the targets set out in Vision 2030. Coordination activities are across public and private sector entities, covering strategic direction, regulation, tourism development investment, transportation and logistics infrastructure development and management, branding and promotion, visitor experience, and many other initiatives. 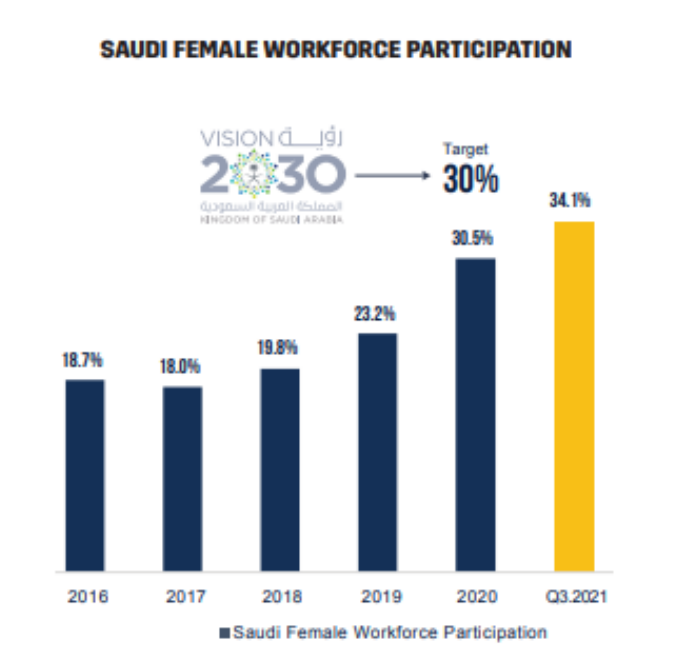 Developing the tourism sector in the Kingdom directly and indirectly supports the achievement of many key strategic objectives of Vision 2030, as highlighted in the figure below. Tourism will strengthen Islamic values and national identity by promoting the Kingdom as a religious destination for over 30 million pilgrims annually, strengthen the private sector (which will be the main driver of future new job growth), attract foreign direct investment, and contribute to one million new tourism jobs, driving youth employment. 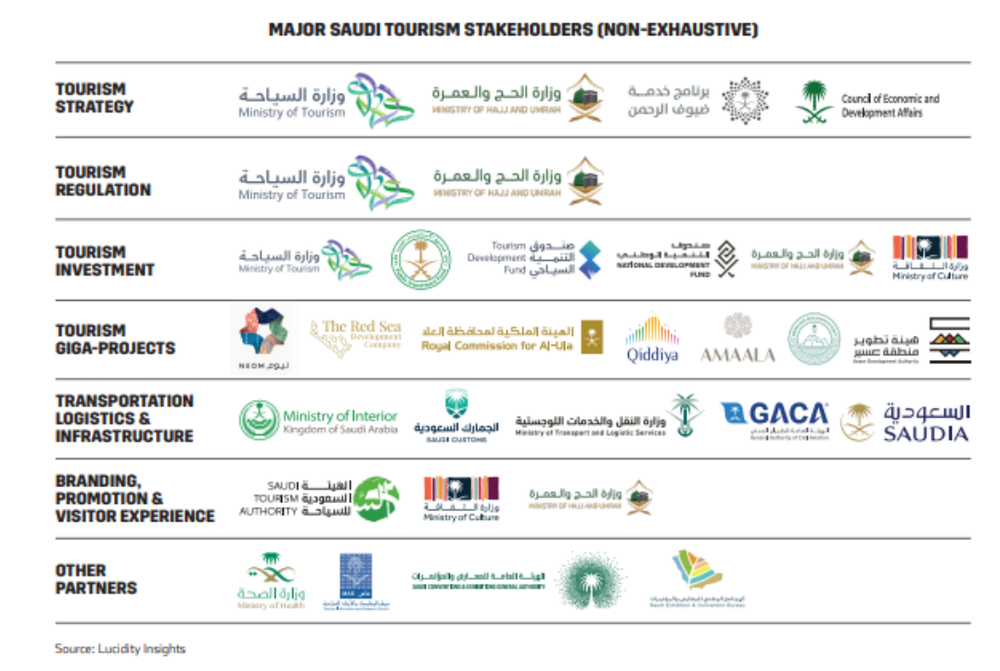 Today, Saudi Arabia's tourism economy employs just over half a million people, of which 22% are roles filled by Saudi nationals. Tourism will also, of course, contribute to government non-oil revenues, as a cornerstone of the Kingdom's economic diversification plan. Saudi Arabia aims to become one of the top global tourism destinations by 2030, welcoming over 100 million overnight visitors annually. 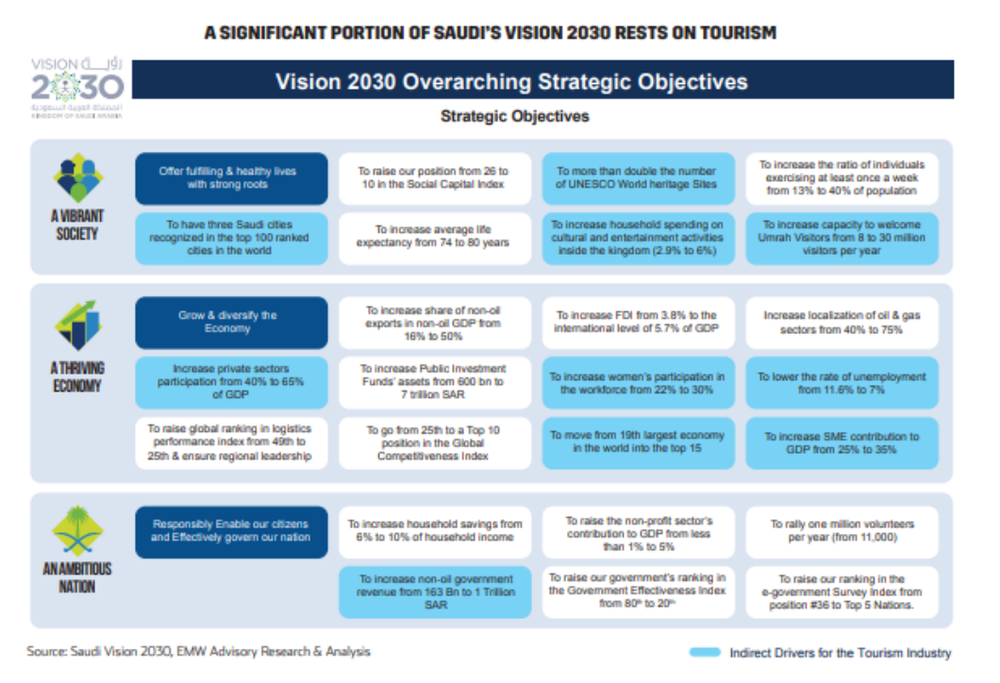 PUTTING MONEY WHERE THEIR MOUTH IS

As the entrepreneurial adage goes, "you must spend money, to make money," and in order for the Kingdom to increase tourism's contribution to the national GDP from 3% to 10% by 2030, the Kingdom is putting money where its mouth is. In less than a year of being established, the Saudi Tourism Development Fund stated that it had deployed $533 million on tourism projects worth a total of over $2 billion; the fund was initially established with $4 billion for investment.

Meanwhile, the PIF has announced a five-year strategy that aims to invest $40 billion each year into the domestic economy until 2025, with 1.8 million jobs expected to be created. Many, though not all, of PIF's investments are geared towards tourism development projects. In late 2021, the Minister of Tourism, H.E. Ahmed Al Khateeb, publicly announced that the Kingdom had committed to spend $1 trillion towards tourism projects over the next 10 years.

With this investment and the various tourism initiatives across the country, Saudi Arabia is looking for a return on investment that would see an increase of more than 5x on 2018 tourism spend in the Kingdom and contribute 10% to the Kingdom's GDP. In following with global tourism trends, the Kingdom expects more than half of those tourism revenues to come from leisure tourism– a tourism sector that was barely existent in the country a few short years ago. 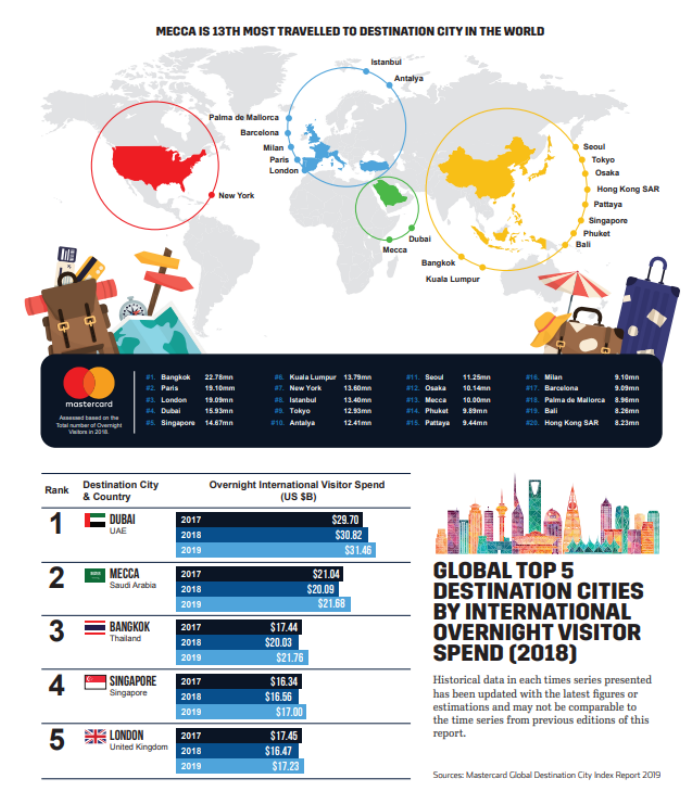 Though Saudi Arabia is new to opening its borders to the general international public, the Kingdom's religious tourism has thrived for thousands of years. Once a year, Muslims of every ethnic group, color, social status, and culture gather in Mecca, the holiest site in Islam, and worship together. By no means is "welcoming foreigners" a new concept in Saudi. In 2019, Saudi Arabia welcomed over 21 million Muslim pilgrims inside its borders for Hajj and Umrah. Due to the prominence of these pilgrimages, the city of Mecca regularly lands itself on Mastercard's Global Destination Cities Index. In the 2019 ranking (which covers 2018 figures), Mecca was ranked as the 13th most visited city in the world, with 10 million overnight visitors, and ranked second for international visitor spend, at over $20 billion. 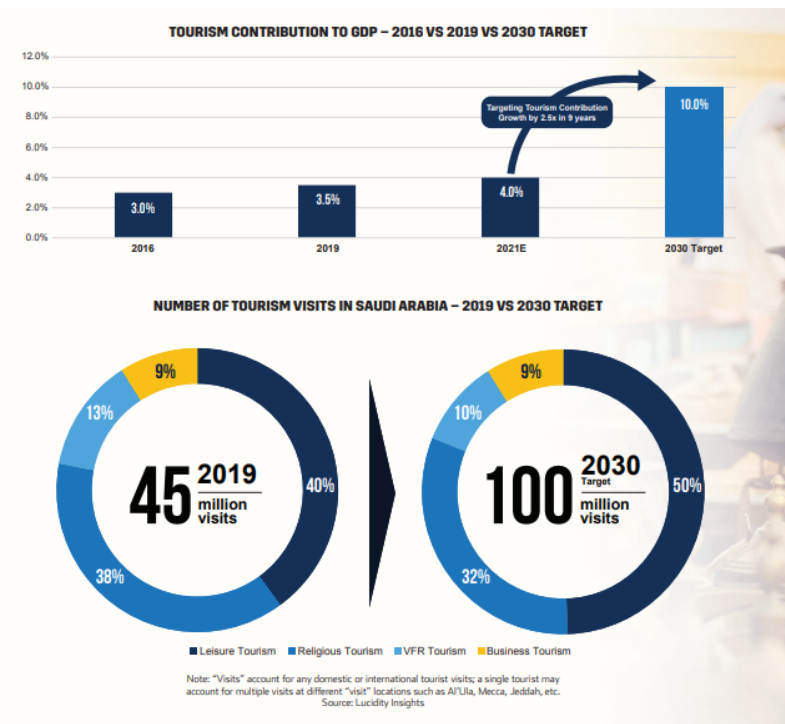 In September 2019, Saudi Arabia opened its doors to the world for the first time, as one of the few "final frontiers" of tourism. Prior to this, besides Muslim pilgrims, only business travelers invited by Saudi companies and organizations could gain entry to the Kingdom on a business visa. Within the first four months of accepting tourism visa applications, more than 300,000 applications were filed. 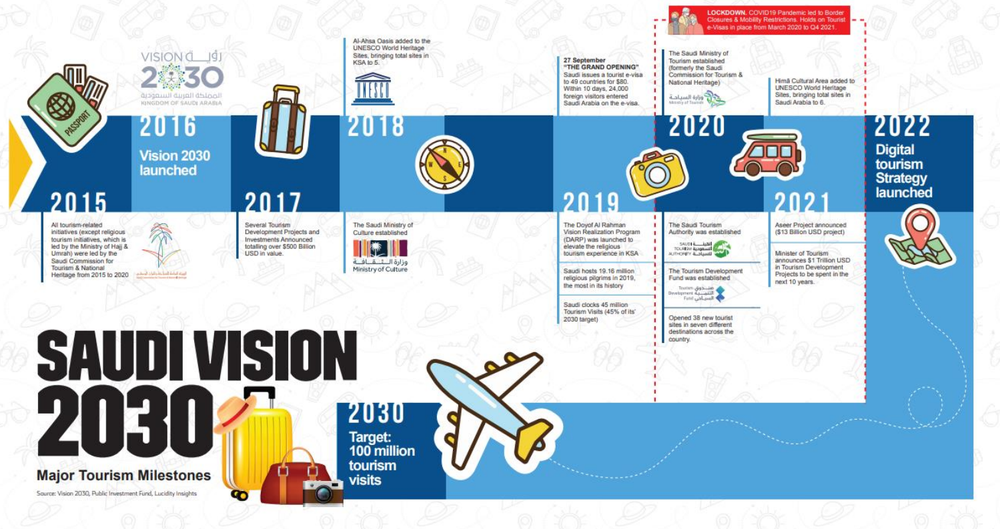 Unfortunately, shortly after the "grand opening," the newly opened borders were then subsequently closed in 2020, along with most of the borders around the world, due to the Covid19 Pandemic that affected mobility globally. Despite this, the Saudi Tourism Authority says that Saudi Arabia was able to garner 5% of its tourism revenue from the leisure tourism sector in 2019. In fact, Saudi Arabia's Tourism Minister told Bloomberg TV in an October 2021 interview that the country was on track to have tourism contribute to 4% of its GDP that year.