MENA startups data platform MAGNiTT has released its MENA Venture Investment Report for the first half (H1) of 2018, which shows a 12% increase in the number of deals in H1 2018 (at 141 investments) up from 125 deals in H1 of 2017. However, in terms of the value of funds raised by MENA startups in this period, the disclosed funding value is down 43% at US$112 million this half year, compared to the same period in 2017 (without taking into account Careem's $150 million). MAGNiTT's analysis attributes this difference to the fact that almost 23% of investments in H1 2018 were shared with undisclosed figures- up from 6% undisclosed investment in H1 2017.

"We have seen an uptick in the number of undisclosed deals in the region," explains Philip Bahoshy, founder and CEO, MAGNiTT. "We took this opportunity to create our MAGNiTT proxy [for the deals with undisclosed values], which highlights that we are in a healthy situation similar to funding in 2017 H1," he adds. Using historical investment data (that go back to as early as 2010) broken down by startup, investment stage, investors etc., MAGNiTT was able to arrive at averages for deal size, using which they calculated the estimated round size for each of the undisclosed deals. Bahoshy adds that the reasons the funding values remain undisclosed could be varied- ranging from entrepreneurs' hesitancy to specify amounts to the region's investors preferring not to disclose amount invested. 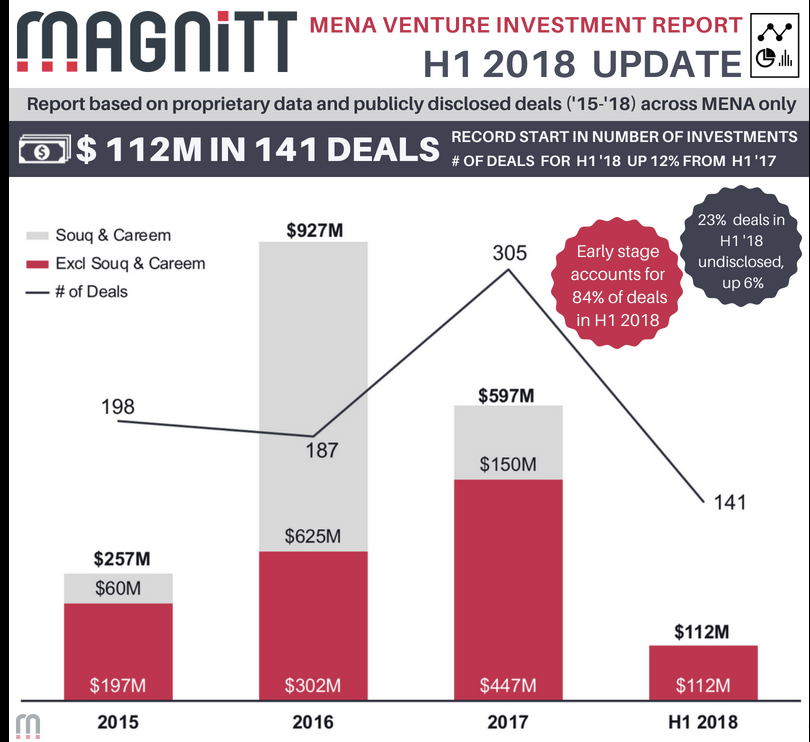 Further explaining the dip in funding among MENA startups this year, Bahoshy draws attention to stats that 60% of the top 200 funded startups across MENA were founded between 2012 and 2015, and hence many of them are in the process of raising their Series B+ rounds. "This generally takes a longer fundraising cycle and we expect there to be further announcements similar to [that of] Luxury Closet's and Mawdoo's [investment announcements] in the coming months," adds Bahoshy.

In terms of the geographical trends, the report finds that the UAE continues to account for the lion's share of startup deal counts (32%) and investment values (59%) in the region, with the countries of Egypt and Saudi Arabia reporting an increase of 12% and 9% respectively in startup funding in H1 2018. Nevertheless, it's also noteworthy that the UAE has seen a drop of 5% drop in deals and 10% fall in investments raised, in H1 2018, compared to same period last year. "Given the percentages are relative in terms of number of deals, we still see healthy activity in the UAE with a large number of accelerator programs being set up in the UAE, as well as many startups creating business HQ in the UAE to benefit from the commercial relationships with corporates," says Bahoshy. 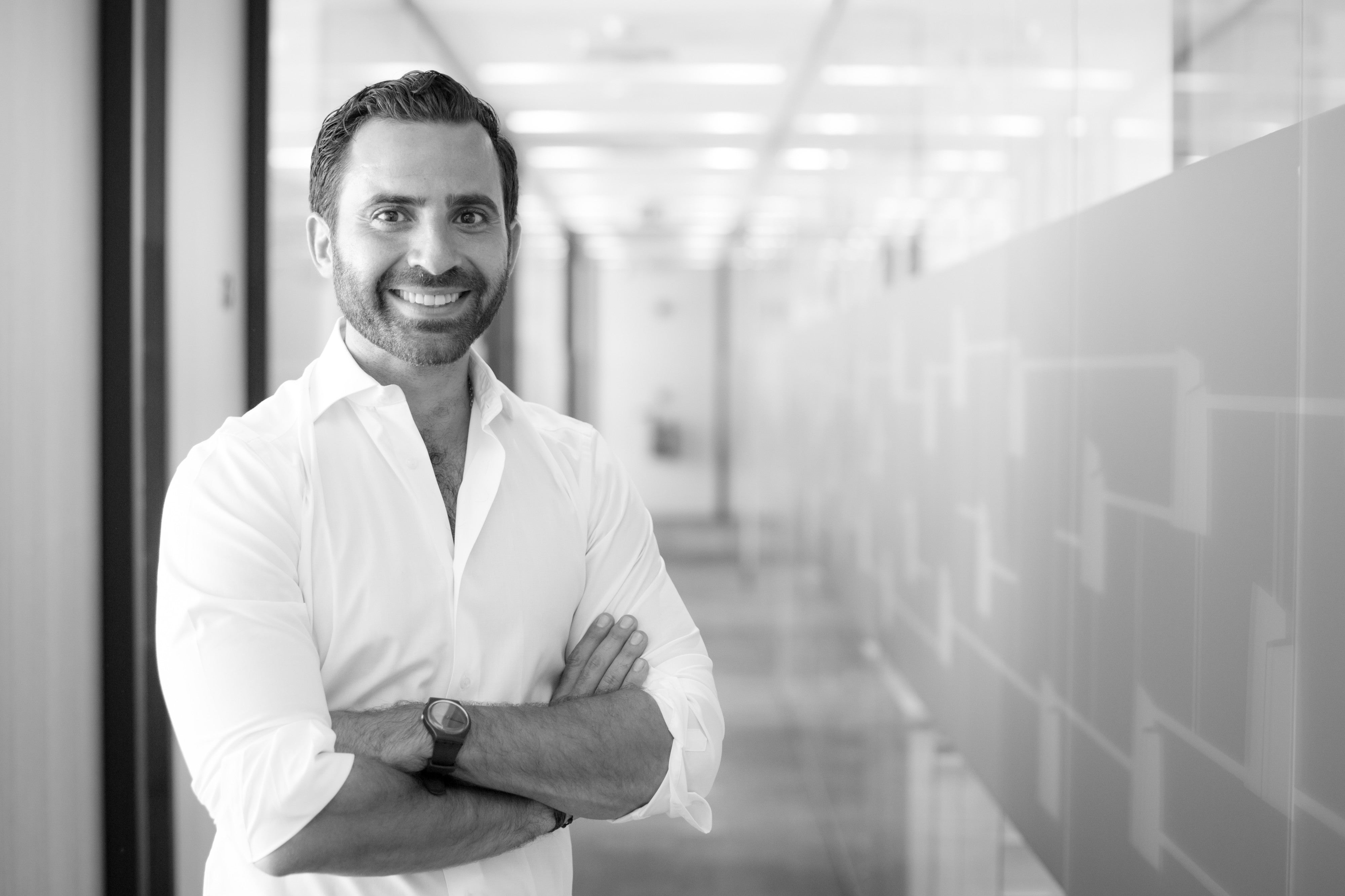 In case of the investor community, H1 2018 saw new market entrants deploying money into the region's startups alongside a group of active investors from previous years. 500 Startups remained the most active venture capital investor, (especially at the seed and pre-seed stage) accounting for ten investments, followed by MEVP with eight deals and Arzan Capital with seven. "We have seen existing players continue to make investments in startups, but new investors emerge from across the region like KISP Ventures, Jusoor, and Riyad Taqnia Fund making investments in different stages of the startup investment cycle," notes Bahoshy. "In a record start of the year in terms of transactions, much of this investment had been focused at the early-stage."

Sharing his views on the overall picture preseted by their latest report, Bahoshy expresses optimism about the fact that multiple governments have made announcements on the creation of Fund of Funds, that's likely to help fuel investments across all stages of startup growth. "We are also seeing corporates play an active role in corporate venture capital activity, and much of the MENA regulation is focused on supporting startups and investors connect. All these factors will help the acceleration of the MENA startup ecosystem," he concludes. 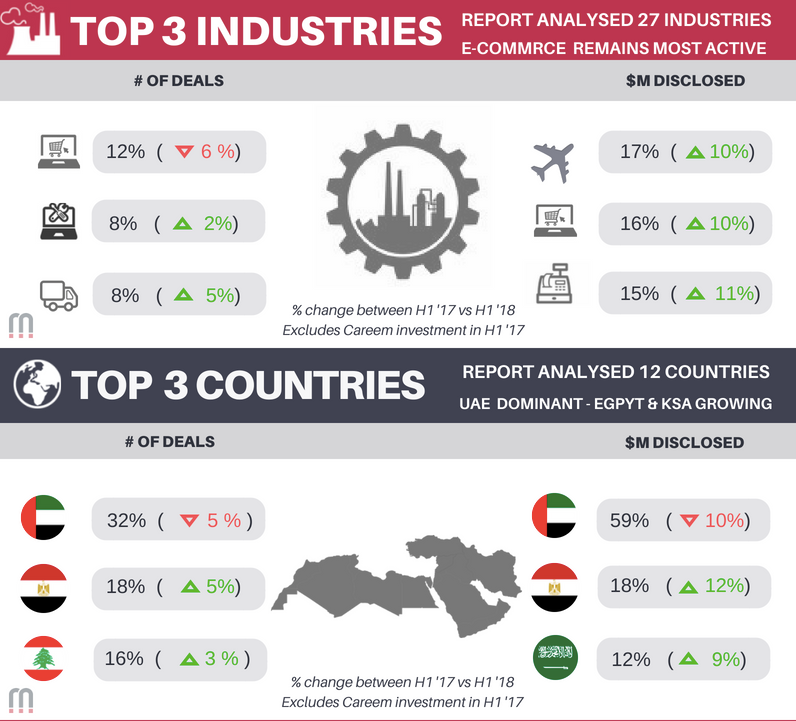