According to the 2019 Global Entrepreneurship Monitor report, around 76.3% of the adult population in Saudi Arabia has perceived good opportunities to start a business– with the percentage ranking second highest out of 49 countries analyzed.

By Osama Ashri
July 17, 2019
Opinions expressed by Entrepreneur contributors are their own.
You're reading Entrepreneur Middle East, an international franchise of Entrepreneur Media.

Saudi Arabia is a land of immense opportunities in many spheres, and this is also true when it comes to entrepreneurship. According to the 2019 Global Entrepreneurship Monitor report, around 76.3% of the adult population in Saudi Arabia has perceived good opportunities to start a business– with the percentage ranking second highest out of 49 countries analyzed.

The ambitious yet achievable long-term blueprint of the Saudi Vision 2030 is based on three key pillars: a vibrant society, a thriving economy, and an ambitious nation. The second pillar in particular –a thriving economy, coupled with rewarding opportunities– aims to stimulate the economy and diversify revenues, which also underscores SMEs as "important agents of economic growth that create jobs, support innovation, and boost exports." In fact, the Saudi Vision 2030 pledges to raise the contribution of SMEs to Saudi Arabia's GDP from 20% to 35% by 2030.

It takes an ecosystem

Capitalizing on such a tremendous opportunity and realizing the aforementioned Saudi Vision 2030 mandates demands invigorating a robust entrepreneurship ecosystem. For this to happen, there needs to be enabling policies, appropriate funding vehicles, a stimulating culture, a range of support mechanisms (including infrastructure and accelerators), a pool of human capital with entrepreneurial drive, and venture-friendly markets1. Such an ecosystem encompasses an array of stakeholder groups that include universities, corporations, risk capitals, and entrepreneurs2. The stakeholders' chief role is to cultivate the aforementioned ecosystem requirements in order that enable the creation and growth of startups and SMEs.

As part of Saudi Vision 2030, the government is forging the necessary commitments to further fuel entrepreneurship and the SME sector. Translating such commitments into action has put entrepreneurship in Saudi Arabia on steroids, as it has been supercharged and fuel-injected by a range of attractive initiatives and hug funding boosts. The Saudi government has injected SAR72 billion (US$19.2 billion) stimulus package to boost the private sector, an enormous part of which was allocated to different programs and initiatives supporting the SME sector, such as government fees reimbursement, a government VC Fund, indirect financing to SMEs, and export financing. Furthermore, the Public Investment Fund (PIF) created an investment fund, with a capital of SAR4 billion ($1.1 billion) that will attract private sector participation through investments in venture capital and private equity funds.

The government has also launched the Meras program, which provides all the government and private sector services an entrepreneur needs to set up a business in one day. In addition, the government established The General Authority for SMEs, otherwise known as Monsha'at, with a number of pledges that include removing obstacles, facilitating access to funding, supporting SMEs in marketing and exporting products and services, and enabling national entities to collaborate with relevant stakeholders. All of these reflect the Saudi government's considered efforts to make positive changes across the entrepreneurial ecosystem. Inspired by Saudi Vision 2030, a multitude of entities, from the private, public and third sectors, have forged ahead to design and implement a spate of initiatives and programs to accelerate the growth of Saudi Arabia's entrepreneurship ecosystem. 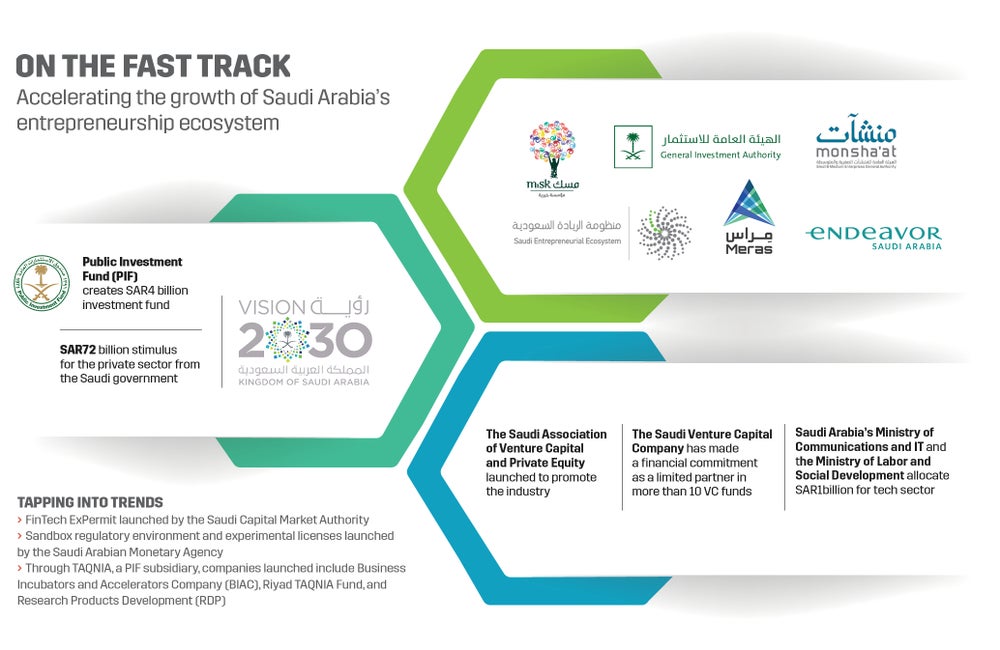 Here are a few examples that showcase this new development:

Human capital is strategic to the growth of the local entrepreneurship ecosystem To nurture the necessary talent needed in Saudi Arabia, the MiSK Foundation has been playing a pivotal role. A very recent example is the MiSK Innovation 500 Startups program, which brought Silicon Valley growth techniques to support MENA-based companies to scale up and fundraise. Also, in partnership with the Ministry of Education, Ministry of Communications and IT, as well as Saudi Telecom Company, MiSK Innovation attracted more than one million people to participate in Saudi Codes, an educational initiative which teachesbasic coding skills. In addition, a multitude of sectorfocused hackathons attracted thousands of developers. One stand-out example was the Hajj Hackathon organized by the Saudi Federation of Cybersecurity, Programming, and Drones, which broke the Guinness World Record for the most participants with around 3000 developers from 100 countries.

Funding SMEs and initiatives is another crucial component for the development of the entrepreneurship ecosystem The Ministry of Communications and IT has recently signed a cooperation agreement with the Ministry of Labor and Social Development to allocate up to SAR1 billion fund to support initiatives across the tech sector, including tech startups. The fund will be targeting investors, entrepreneurs, government entities, accelerators, and tech developers in Saudi Arabia. The Saudi Venture Capital Company (SVC), which was recently launched, has made a financial commitment as a limited partner in more than 10 VC funds. SVC is a government VC company that was established as part of the Private Sector Stimulus Plan (PSSP) to minimize the existing equity funding gap for startups. It has also co-invested in about 14 startups through a matching program. To further advance this vital sector, the Saudi Association of Venture Capital and Private Equity was established to promote the industry's contribution to the growing Saudi economy, helping to determine and improve best-in-class regulatory policies, as well as raising awareness and fostering collaborations between industry professionals.

The Saudi entrepreneurship ecosystem is nimble to adapt to emerging trends The Saudi Capital Market Authority (CMA) established the Financial Technology Experimental Permit (FinTech ExPermit) granting permission for equity crowdfunding platforms to operate. In addition, the Saudi Arabian Monetary Agency (SAMA) designed a sandbox regulatory environment, and granted a number of banks and companies experimental licenses to provide various services in the field of digital payments. It also launched Fintech Saudi, which brings together key stakeholders to foster a culture of innovation in the financial sector in Saudi Arabia. Furthermore, a bundle of support companies has sprouted up out of TAQNIA, a subsidiary owned by PIF, with the mission to create value from technology. A few examples of such companies include Business Incubators and Accelerators Company (BIAC), Riyad TAQNIA Fund, and Research Products Development (RDP), a center for technology development and commercialization.

Diversity and inclusion augment developing local entrepreneurship ecosystems The Saudi General Investment Authority (SAGIA) has been playing an integral role in making local entrepreneurship more inclusive to the global entrepreneurship scene, as well as to the international business community wanting to access the diverse and lucrative Saudi market. Since 2017, the authority has been granting international entrepreneurs an innovation license to pilot the expansion of their startups in Saudi using partner Saudi universities and business incubators. In addition, SAGIA has recently launched VENTURE, an initiative aimed at attracting global venture capital firms to the kingdom. During the recent Financial Sector Conference, held in Riyadh earlier this year, 20 venture capital firms signed agreements as part of the initiative.

NGOs are an essential building block of the Saudi entrepreneurship ecosystem A prime example of this is Saudi Endeavor, which has been supporting a number of high-impact, high-growth local entrepreneurs in scaling up their companies, creating thousands of jobs and increasing their annual revenue by an average of 16%. 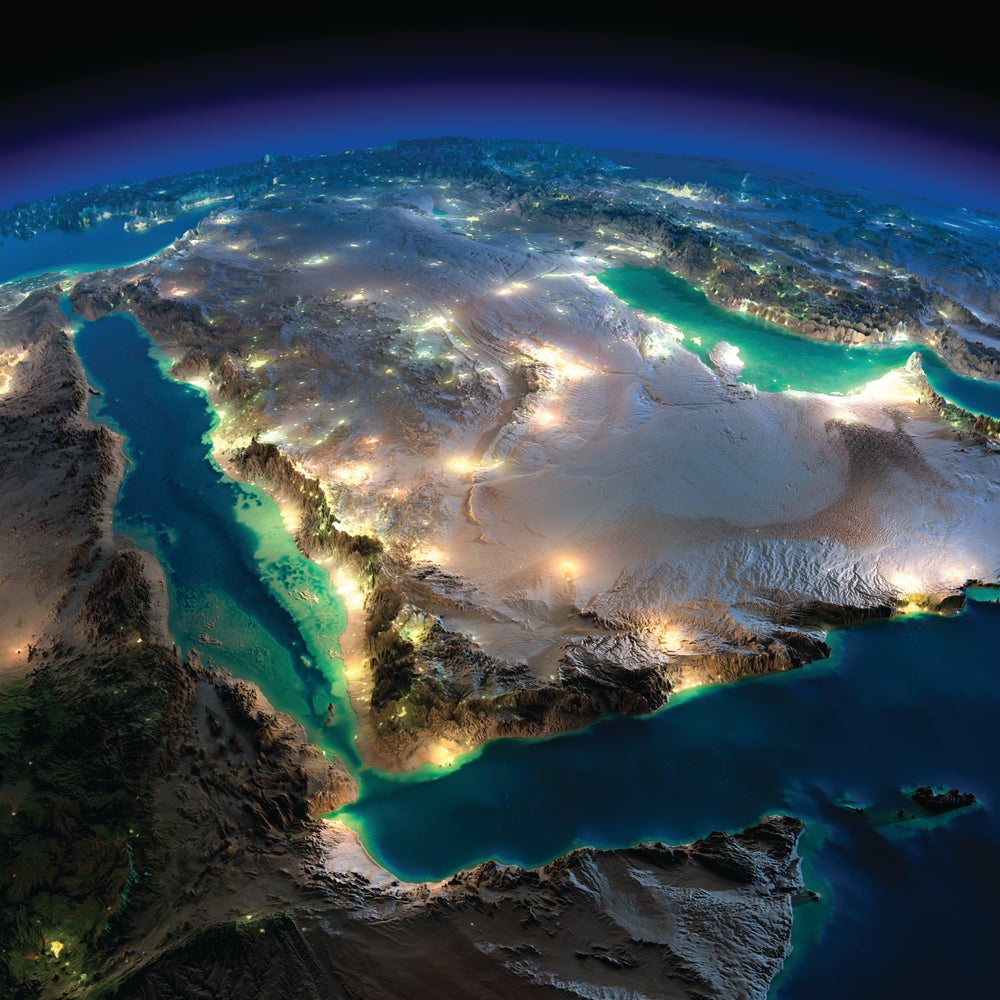 With such a proliferation of initiatives, a couple of inextricably linked recommendations come to mind. First, key stakeholders should build a repository of the ongoing initiatives' outcomes in order to keep track of and gauge the impact on the local entrepreneurship ecosystem. Secondly, these initiatives have a cost burden which necessitates having shared ecosystem metrics to measure the returns that entrepreneurship generates locally.

Ultimately, the local entrepreneurship ecosystem could leverage a rich pool of lessons learned to accelerate its evolution. It could thus further improve its conditions to increase the chances of success for entrepreneurs and SMEs. A word of caution though: published indices and rankings should not be perceived as the "guardrails" of entrepreneurship ecosystem development. Rather, policy makers and other stakeholders should keep their fingers on the pulse of the ecosystem to assess the validity and contribution of their initiatives, and iterate accordingly.

The aforementioned efforts have gained lots of impetus at a national level, showing a fertile ground for a variety of entrepreneurship ecosystem stakeholders. However, the real yardstick that will reveal how the entrepreneurship ecosystem is developing is embedded in the regions. Hence, efforts at a national level should be also cascaded down to a regional level in order to harness the wide spectrum of comparative advantages that Saudi regions enjoy. The Saudi Entrepreneurial Ecosystem Lab, or SEE LAB, was developed for this purpose. It is an integrated platform with the mission of contributing to the growth of every Saudi region's entrepreneurship ecosystem through three key levers: enabling the interaction between the ecosystem stakeholders, engaging the entrepreneurial community in generating and implementing relevant initiatives, and educating the stakeholders about trends and issues in the respective region's ecosystem for potential improvements. The initiative was piloted in 2018 and started to take root in the Almadinah and Ha'il regions.

To further reinforce the development of the entrepreneurship ecosystem in the regions, I have led the efforts to set up an arrangement with MIT Regional Entrepreneurship Acceleration Program. This arrangement is structured around having different regions from Saudi Arabia engage in the program to design and implement specific interventions that will enhance the participating regions' respective entrepreneurship ecosystem. The Makkah and Madinah regions have already participated in previous cohorts of the program focusing on the comparative advantage of Hajj and Umrah, and Ha'il region will take part in the upcoming cohort starting later this year.

A boulevard of fulfilled dreams

It takes an ecosystem to get a fledgling startup off the ground. It is equally important to have an ecosystem to help SMEs grow and create the desired impact on the social and economic levels. It is becoming more evident that Saudi Vision 2030 has fueled the efforts of many players in the Saudi entrepreneurial ecosystem– indicating the emergence of a healthy, stimulating ecosystem platform. Aligned with Saudi Vision 2030's entrepreneurship related objectives, fostering an entrepreneurship ecosystem has become imperative to enable the alignment of these stakeholders' efforts towards a collective impact at both regional and national levels. Such stakeholders must dovetail their efforts to nurture such entrepreneurial ecosystems, and thereby create a boulevard of fulfilled dreams.

References 1: These elements are adapted from the six domains of an entrepreneurship ecosystem framework developed by Daniel Isenberg. 2: These stakeholders are defined based on MIT Regional Entrepreneurship Acceleration Program (REAP) Stakeholder Groups Model.

This article has been built as a collaboration between Misk Innovation and Entrepreneur Middle East.