A Peek Into the Top 25 Emerging Scale-ups in Portugal: Report

The new report details the state of the Portuguese entrepreneurial and innovation ecosystem.

The report by EIT Digital, Building Global Innovators and their partners takes a data-driven approach at understanding key elements within the Portuguese entrepreneurial and innovation (E&I) ecosystem. Some of these elements include funding structure, investor profiles, economic impact and startup business models, among several others.

Its starting sample size consists of 480 Portuguese technology companies founded between 2012 and 2017 across four major verticals:

Researchers arrived at the top 25 by considering the total funding received, total revenues, capital to revenue ratio and jobs created of candidates with Portuguese origin, with less than five years of operation (i.e. between 2012 and 2017). 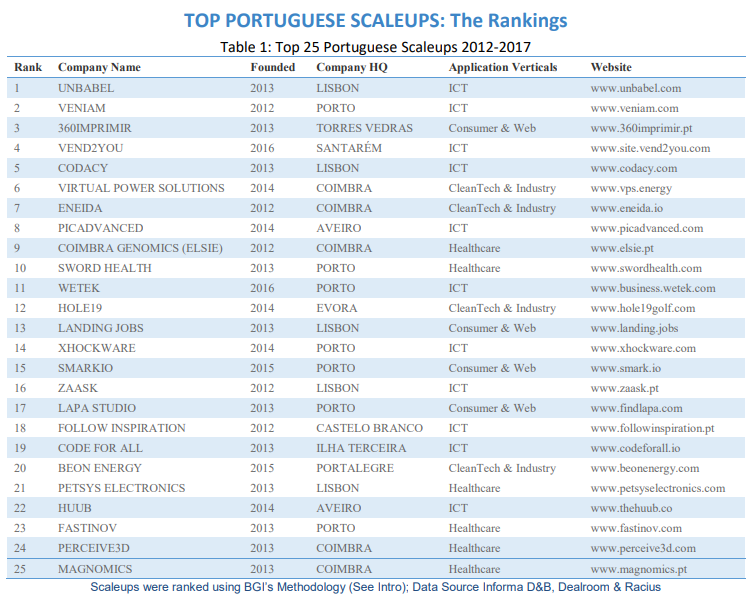 The Portuguese entrepreneurial and innovation ecosystem relies significantly on venture capital financing from outside Portugal with 72.6 percent of total funding in the Top 25 coming from non-Portuguese sources, mainly from the U.K. and the U.S.

There is a big dependence on external sources of venture financing, making the Portuguese Entrepreneurial and Innovation ecosystem very susceptible to the international context.

The five top industries in Portugal based on shares of total investments are: 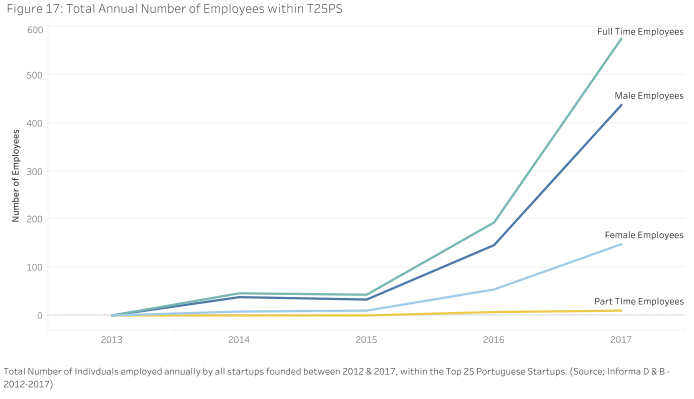 A breakdown of investment sources within the top 25 and the ecosystem as a whole show that the U.S., United Kingdom, Belgium and France are the largest contributors of VC financing from abroad, with a combined investment of €92 million in the Portuguese Venture Ecosystem (PVE).

Investment sources at a country level indicate that Portuguese investors are leaders in terms of frequency of investments and total sum of investments (€30 million in top 25 and €41 milllion in PVE).

However, their average financing size per investment within the PVE is approximately €1.5 million, which is 121% lesser than the average in USA, UK and Sweden.

ICT received most funding, contributed to most revenue growth and job creation

The second largest contributor to revenue growth and job creation is consumer and web.

Medical devices and health IT receive the second largest share of financing within the top 25 and PVE (16.7 percent).

EIT Digital is a leading European open innovation organization that brings together a partnership of over 150 top European corporations, small businesses, startups, universities and research institutes.

Building Global Innovators (BGI) is a deep innovation global accelerator based in Lisbon (Portugal) with operations in Cambridge (U.S.). BGI was born from the MIT Portugal Innovation and Entrepreneurship Initiative (IEI) -- launched to support Portugal's goal to strengthen its capacity in business education, technological innovation and entrepreneurship.

Portugal Startups
Taking the Portuguese startup scene to the world.

Tech Giants Amazon, Apple, and Google Are Pledging to Help with Disaster Relief in Turkey After Earthquake

Plus, the CEO of yogurt company Chobani said he was donating $1 million to Turkish Philanthropy Funds.

Kick off your Amazon side hustle with this bundle that teaches you how to succeed on the site.

6 Inspirational Movies to Get your Entrepreneurial Juices Flowing

Ignite an entrepreneurial fire inside you, especially if you are getting started in your business venture, by watching the movies mentioned in this article.