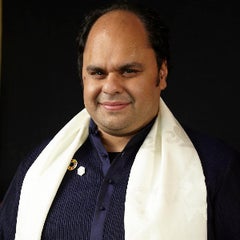 Founder, We The Planet

Kunal Sood is an internationally renowned social impact strategist, investor, and entrepreneur. As the founder of We The Planet,  X Fellows & NOVUS, Kunal is focused on making the impossible possible by positively disrupting the human experience. He does this by designing deeply immersive and transformational experiences partnering with iconic leaders and organizations worldwide that are focused on solving humanity's global grand challenges. His summits often include heads of state, celebrities, and fortune 50 companies. Kunal started his career as a Global Health Scientist and was trained at UCSF, where he worked on a ground-breaking Global Health Initiative with Harvard at PUKAR an NGO based out of Mumbai. Following this, he went on to become a fellow at Stanford University’s Center for Compassion and Altruism. From the slums of Mumbai to the United Nations in New York Kunal has built global movements and is deeply committed to impacting a billion lives leveraging social innovation and entrepreneurship. He is a TED Resident and recipient of numerous awards including the World Innovation Award, the Metcalfe Prize as a Tribeca Disruptor Foundation Honoree, and Fellow. Kunal is an avid public speaker having spoken at the United Nations, TED, SXSW, Aspen Institute, Forbes, and the White House.

Most recently Kunal launched SDG Moonshots an initiative celebrating the 50th anniversary of man landing on the Moon at the UNand. He serves as the New York Chapter Ambassador at Singularity University and a Global Ambassador for Open ExO and the Nonviolence Project. He has an MBA from Kellogg School of Management and a Masters in Positive Psychology from the University of Pennsylvania.