Over last four years, the erstwhile dead market has turned into a crowded pipeline of exits.

By Sandeep Soni
August 19, 2018
Opinions expressed by Entrepreneur contributors are their own.
You're reading Entrepreneur India, an international franchise of Entrepreneur Media.

Private equity (PE) exits in India have been brutal to investors. Past 10-year performance at least conveys the market type –exit market is of around five-six years, relatively longer than the earlier expected duration of around four years. Poor market conditions till 2014 switched to improved sentiments in the following year that led to the pent-up demand for returning capital. Over last four years, the erstwhile dead market has turned into a crowded pipeline of exits.

While the PE investments saw a cut of 22 percent in total deal value compared to the year-ago period, the exits continue to rally. The first half (H1) of 2018 recorded 84 percent growth to $10.6 billion in exit value from H1 2017. The $16 billion Flipkart's acquisition by Walmart would add to that amount. Overall exits last year returned $15.7 billion capital.

"This is more than what we saw in the entire last year. A lot of investments are coming in while a lot of money is also being taken out. This is great considering one of the banes for equity investing in the past was that money was not going out of India," says Sanjeev Krishnan, Partner and Leader - Private Equity & Deals, PricewaterhouseCoopers India.

"There seems to be an irreversible shift towards the white economy. It is creating massive opportunities with organized capital hoping to create a significant market share in a lot of industries," says Dhanpal Jhaveri, Managing Partner, Everstone Capital.

The maturity is in fact on both sides – companies and funds which have seen various business cycles of boom and bust. From over 100 PE funds that India earlier had, today we are down to only few that have scaled, probably 10-12 including Everstone Capital, Kohlberg Kravis Roberts, and Chrys Capital. Hence, consolidation has worked out well.

"Such funds are more willing to back entrepreneurs in the scale-up journey and experiment with different exit strategies such as distressed sale, buyouts, minority deals etc.," says Sanjay Kukreja, Managing Partner, Chrys Capital.

"A lot of foreign investors earlier had the money but didn't have enough inorganic growth opportunities in their respective economies. The non-native economies which they wanted to explore were closed to them. Now they are looking very keenly at India as regulations are relaxed and its growth story remains intact. At Naspers, we are very bullish on merger and acquisition (M&A) and exit opportunities," says Ashutosh Sharma, Head – India Investments, Naspers.

What's also driving opportunity in M&A for PE investors, (which is the second trend) is a twin problem. First, deleveraging (sale of assets to reduce debt) on the corporate balance sheet side and second, solving the challenge of stressed assets (umbrella term for non-performing assets, restructured loans, and written-off assets) for banks. As companies look to deleverage themselves and banks sell stressed assets to recover loans, it offers the opportunity for PE investors to strike a deal.

The third trend emerging out is from the complexity of the family businesses. "There are issues as they are getting more professional and scaling. There is also a challenge in succession planning. The next generation wants to do something else in life and for that they need cash," adds Jhaveri. The fourth trend is around technology disruption. "As the old economy is looking to figure out the digital play, there are a host of start-ups looking to disrupt the old economy," he says. These have given exits to PE investors who had backed conventional businesses.

The investments that have happened particularly in consumer technology are also gradually ripening for consolidation such as travel, food, education etc. "We will see a lot of consolidation in the next couple of years. However, rationalization needs to happen in terms of doing away with discounting," says Sharma further adding, "Interestingly, there are new categories coming up like content and various use cases for blockchain." 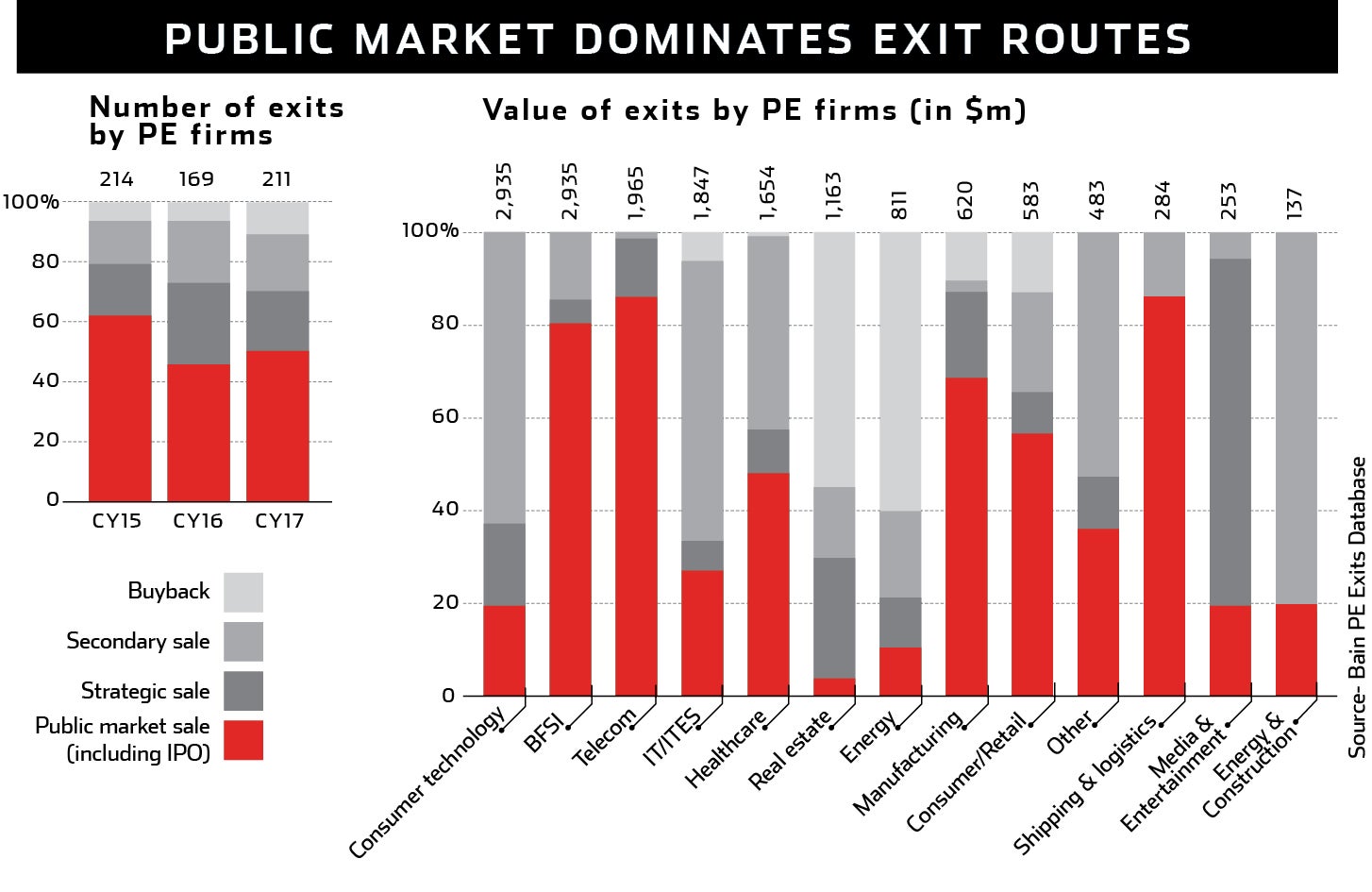 The rise in exits has been largely driven by a record number of public listings in the first half of this year. An Ernst & Young report stated that 90 IPOs were raised between January and June. The total amount raised was $3.9 billion that contributed five percent to the global IPO money. That's been cheerful for PE investors given the fact the not-so-positive image that the Indian market had due to lack of exits. However, IPOs have been difficult to make exit work from the liquidity perspective.

"For instance, we took pharmaceutical company Eris Lifesciences public last year where we were the only selling shareholder. It was a good example of IPO being a liquidity event. However, there has been enough number of IPOs as well where businesses are not able to get liquidity at the time of taking it public," explains Kukreja.

Usually, businesses in such cases have to face a lock-in for another year or two for public listing. This tends to elongate the timeline of an exit. "So strategic exits are easier to manage but if you want to go for IPO then you must time it well. Out of five years invested in a company, the second or the third year is when going public should be targeted, not in the fifth year. However, we have seen a lot of good exits come post-lock-in period," he concludes.