Lessons Entrepreneurs can Learn From the business tycoon's failure

"The King of Good Times' Vijay Mallya seems to be going through an ironic period in his life. Now that his "good times' appear to be far-fetched, I'm sure he'll welcome "mediocre, debt-free times' with open arms.

Once termed the Indian version of Richard Branson is now a "willful defaulter'. Vijay is being chased by almost every institution in the country — the banks, regulators and, even the judiciary. What did he do? Well, not much! As everyone knows how big of a collector he is, he just gathered a consortium of 17 loans for himself from, mind you, state run banks, and they all add up to a whopping amount of Rs 9,000 crore. No biggie, right? And when everyone thought this would end, Mallya thought to himself, "Hmm... Wouldn't this be a lovely time to go for a spontaneous vacation to my country house in London? Except a couple of loans, I have given people no reason to think I'm an absconder. Might as well pack 7 bags in case I don't forget anything." Okay, jokes aside. 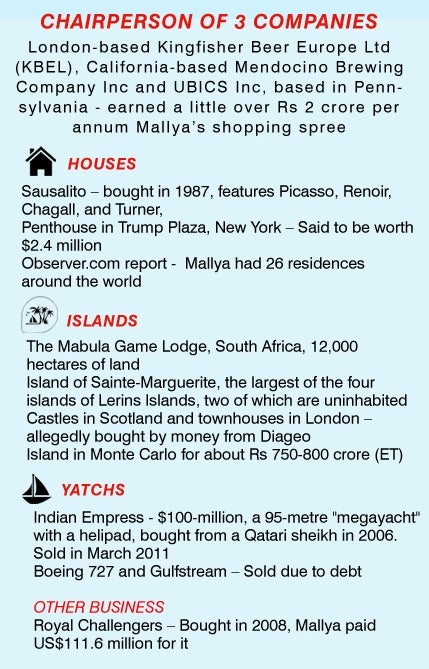 It's not that Vijay Mallya was always this bad at making business decisions (or any decisions for that matter). It was his skills and money, which he very conveniently inherited from his father that made him the flamboyant billionaire he is. His good days include the launch of Kingfisher Strong in 1999 that changed the consumption of alcohol nationally. He then expanded his range by buying brands like Royal Challengers, Bagpiper whisky and Romanov vodka. He launched Kingfisher Airlines and bought IPL and F1 teams.

When everyone was busy getting impressed by his unstoppable shopping spree, no one questioned where he was getting the money for all this? We kind of went along with him "being' rich. So how did his story take a 180 degree turn? He made some pretty terrible decisions along the way.

And we made a list so history wouldn't repeat itself.

When your business doesn't make a profit for 8 years, take the hint

This goes completely above me. Once the second-largest airline in India, Kingfisher Airlines was never once able to earn a profit and it still went on for 8 years. In 2009, the net loss went from Rs 213 crore in 2008 to Rs 1,317 crore. And that didn't stop Mallya from continuing. His delusional optimism of reviving the company went to such extent that the accumulated losses as of March 2013 stood at a whopping Rs 16,023 crore. He did cut flights from 300 to 110-125, but it never reached the skies Vijay was so hopeful about.

Lesson- Know when to give up. Hard work is appreciated but when it doesn't yield results, you should know when to stop.

When bankrupt and you see some money coming your way, how about paying the employees first

Sure, employer will tell what work to do but it's the hard working members of staff accumulated over the years that will make the work happen. At the end when company gets a big profit, it's the owner that gets it. An employee gets his regular salary.

Given that and how indebted Mallya was by 2012, it was his inability to pay salaries to 1500 employees that stopped the beleaguered airline to continue operating. When asked why he couldn't he simply answered, "I don't have money to pay your salaries". Okay, believable. But then Diageo acquired 27% stake in United Spirits Ltd. for Rs 6,500 crore in 2013, but no lender or employee was given a single penny, without any reasons stated. Mallya had his own wish list to fill. He spent Rs 9.5 crore to get Australian all-rounder Shane Watson to play for his Royal Challengers Bangalore Indian Premier League cricket team this season. In December 2015, his birthday became a gala with 200 people and featuring a firework display and performances by Sonu Nigam and Spanish pop star Enrique Iglesias worth 3.5 crore. The whole party cost him more than $2 billion. Money well spent, eh?

Lesson – If you're in debt, a monstrous one, and your birthday is approaching and you have no plans to give salaries to your employees, it's probably better to take it down a notch.

Do not mess with the banks

If Mallya finds it hard to think in a reasonable business-like manner, he should probably think about the welfare of people as a member of parliament. But how dare we think about him thinking about the welfare of people who pay taxes to state run banks when he can't even pay his own employees. Mallya owes Rs 9061 crore to 17 banks which include State Bank of India, Punjab National Bank, UCO, Central Bank, Axis Bank, Bank of India, Bank of Baroda, IDBI, United Bank Corporation Bank, State Bank of Mysore, Indian Overseas Bank, Federal Bank and Punjab & Sind Bank. Mallya claims to have paid Rs 1,200 crore worth of loan already.

Hoping that the airline would revive sooner or later and pay back the money, banks kept giving loans and Mallya accepted them. Finally, when things got out of hand and banks panicked, Kingfisher, was declared an NPA by most banks, including SBI, towards the end of 2011 and beginning of 2012.

The only hope for banks is if Mallya has a change of mind and decides to pay back banks from his personal wealth (Mallya has shares worth Rs 7000 crore in various companies and lot more in fixed assets). Chances of that happening seems as minimal as Trump leaving the 2016 Presidential debate.

Lesson – A stitch in time saves nine. The banks, instead of encouraging Mallya to take loans even when he was in debt, should have spent time on making him understand how bad debts can be.

Have the courage to face your mistakes

Everybody makes mistake. Mallya's happen to be worth Rs 9,000 crore. In any case, how is leaving the country with no prior notice the best idea he could come up with? We get that he messed up big time, but how about giving an explanation first. We don't mind him taking all his extravagant vacations but expecting people to believe that he wants to go to his country home because he wants to 'see his children' is either him considering people are stupid or a bad excuse made in haste.

Lesson – Be smarter about your mistakes. They're going to be out in the open at some point. The better path will be to accept them and save the drowning boat. Right your wrongs always.