The Budget For Youth: #5 'Education'al Surprises From Nirmala Sitharaman

Indian schools and colleges have produced many acclaimed public figures and global leaders but the education system here has had its own loopholes. Over the years, the government has taken significant steps to bring 3 of India's institutions among the top 200 global education houses. However, there's a long way to go for our institutions to meet the standards of Harvard and Oxford.

But when has the Narendra Modi-led government not aimed for the best. Indians are always eying the top spot, even in the field of education. In a bid to make India a hub of world-class educational institutions, Finance Minister Nirmala Sitharaman laid out a floor plan while tabling her maiden budget in the parliament.

The government has plans for bringing a new National Education Policy with the objective of transforming the higher education system in the country. The Union Minister shared that to get Indian institutes counted among the global high league; the allocation for education for FY19-20 will be more than three times the revised estimates. 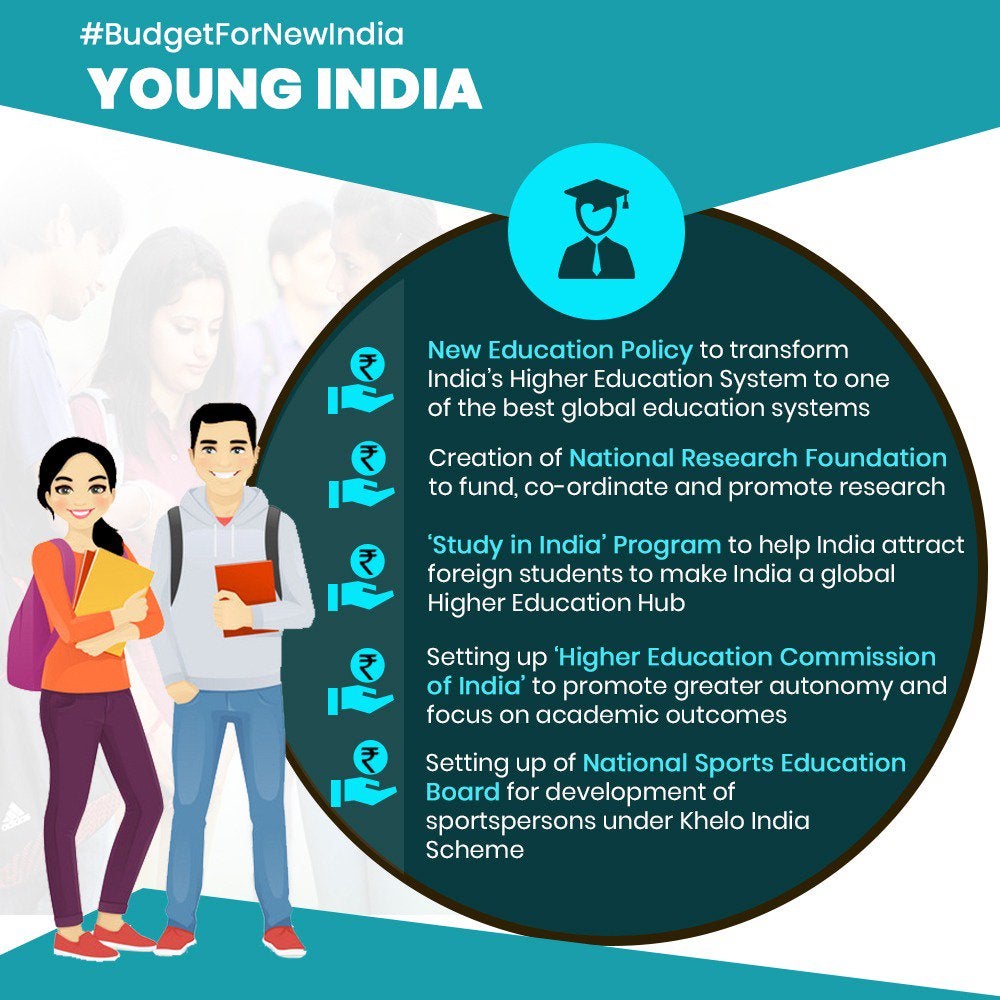 Sitharaman proposed a National Research Foundation (NRF) to fund, coordinate and promote research-related activities in the country. It will assimilate the research grants being given by various Ministries independent of each other and provide a consolidated platform for the youth.

"The Government focusing on research and innovation will lead to progress in the country and rise to various start-ups," stated Anil Nagar, Founder and CEO, Adda247, sharing that he is positive with regards to India's startup growth where India has become the 2nd the largest hub for startups with our youth turning into job creators from seekers.

"We expected a larger focus on education for school-going children. Today, India has almost 250 million children in that age group but very few have access to quality education since it is limited to certain pockets of India," Zishaan Hayath, CEO & Founder, Toppr expressed his disappointment, stressing that children should have access to well-trained teachers, infrastructure and resources from the very beginning.

After Make in India, the government is looking to launch the program "Study in India' for attracting foreign students to come and study in the country. The initiative is focused on promoting better diversity and cultural amalgamation with an attempt to bring in foreign talent to India.

Hailing the "Study in India' initiative, Amol Arora, the MD of SHEMROCK & SHEMFORD Group of Schools stated that the program holds the potential to put India on the world map. "However, we still need a series of fundamental structural reforms - which I hope will be addressed in the near future," he stated.

In an attempt of imparting relevant skills to students to ensure that they are ready as and when they are done with higher education, the government is setting up a High Education Commission for India. The initiative would focus to promote greater autonomy and academic outcomes. The government, however, should also make stronger efforts to incorporate data literacy training at the grassroots level.

Pankaj Muthe, Program Manager, Academic Program, APAC, Qlik said, "The focus on the amplification of skills in new-age tech domains such as AI, IoT, Big Data and Robotics will also help to address the severe skills shortage that businesses across India are facing at present, apart from opening newer avenues of career growth for Indian professionals."

First launched in 2017, Khelo India Scheme's horizon would be widened as a National Sports Education Board is planned to be set up under the initiative. The board would focus on the development of India's sports talent that can represent the nation on global platforms.

The status of education is often a healthy predictor of the country's overall development and well-being. Kanak Gupta, Director, Seth M.R. Jaipuria Schools is hopeful that "the National Education Policy will focus on upskilling of both teachers and learners to meet global levels, and ensuring we don't send our brains abroad, nor do we spend millions of dollars in tuition and living costs."