By Swadha Mishra
August 13, 2015
Opinions expressed by Entrepreneur contributors are their own.
You're reading Entrepreneur India, an international franchise of Entrepreneur Media.

The food and beverages (F&B) service industry in India is approximately $48 billion in size, with Zomato dominating the restaurant discovery aspect, and FoodPanda dominating the food delivery function. Though there are many players in restaurant discovery and food delivery space, but currently, no one solely focuses on offering "last minute' discount deals. But this three months old start-up based-out of Pune was quick to detect loopholes and pain points of many restaurateurs – vacant tables and underutilisation of F&B inventory. And the answer is – Ressy app.

Ressy is an on-demand location-based restaurant discount app founded by Koustubh Rajepandhare and Sagar Patil in April this year. On consumer front, the app automatically detects nearby restaurants and displays best deals on offer. Customers can also view updated restaurant menu, food category, and the hours for which a deal is available and whether the deal is available for dine-in, takeaway or delivery. Whereas, on business front, the app helps restaurant owners provide real-time discounts and offers to potential customers in their vicinity, and help them effectively engage with customers.

It took the team just two months to launch the initial product with around 50 restaurants on-board, which itself validated the need for such a product in market. Speaking on the same lines, Rajepandhare, Co-founder & CEO, Ressy, reminisces, "In my last 6 years of working experience with F&B industry, I realised most of the restaurants weren't running at their full capacity. Half of the time they had vacant tables, underutilised F&B inventory and support staff. We saw an opportunity here to give a platform to restaurant owners to have "customer on-demand'. We did a market research to validate this idea in the month of February 2015 and once convinced about it, we started the product development by February end." 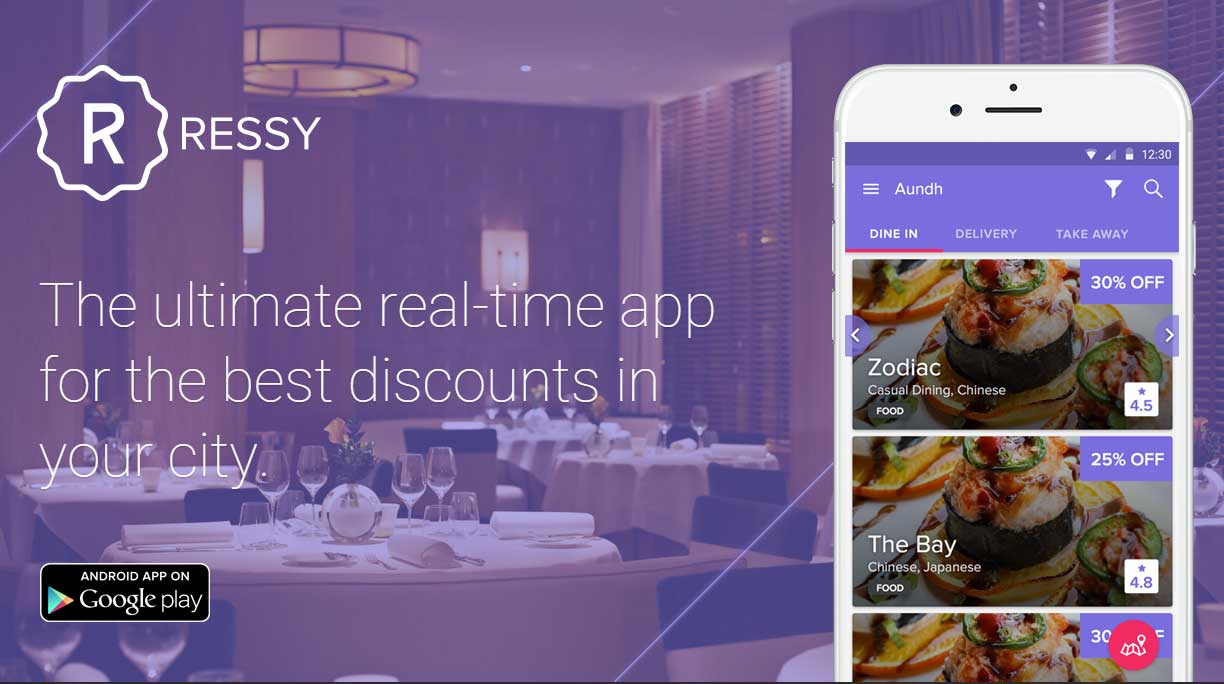 In his brief stint with start-ups, Rajepandhare worked with firms like Groupon, TinyOwl and Deals. He carries rich experience in the e-commerce industry heading sales, marketing and operations. On the other hand, Patil has always been the techie. He handles the entire technology part for Ressy. Prior to starting Ressy, Patil started his first venture - Masterworks, a media agency in 2009, which was later acquired and merged with Multiversity.

Sharing his thoughts on what motivated him to start his own venture, Rajepandhare shares, "Starting my own venture has always been at the back of my mind. I started my first venture in 2009 into fresh herbal juice manufacturing and delivery. I was doing around 700 deliveries per day in a small town like Kolhapur. Had I been completely aware about the various aspects of funding cycles, I would have certainly taken it to next level easily. This made me work with start-ups for experience and to understand how they build and scale business."

Currently, the app only accepts cash, but in future, the team plans to integrate cashless model also to provide a seamless experience to customers and merchants. "Without mobile only presence, real-time activities would have been difficult. That's the sole reason for us to go mobile only. With Ressy, you can only get discounts once you reach the outlet," says Rajepandhare.

Ressy charges a specific percentage as fee on final amount for every transaction done through its app from the merchants. "We charge 10-15 per cent of the final billable amount to the merchants. We help merchants with customers when they actually need them, and they love to pay us for that."

Currently based out of Pune, the start-up has aggressive plans to expand in 10 other cities, adding over 5,000 restaurants and 1 million users by the end of this year. With 35 per cent repeat customers, Ressy plans to scale up its orders to 3,000 by this month end in comparison to 750 orders last month.

To support such growth plans, Ressy, recently, announced to raise $400k in its seed round of funding through LetsVenture. The round was led by Vikram Chachra, Founding Partner, Eight Capital. Other angel investors who participated in this round are ex-Infosys veteran Mohandas Pai and Partner & Co-founder, Aarin Capital; Akshay Garg, Co-founder, Komli Media; Jeljo Johny Kottoor, Director, ProV Venture Investments (Singapore); and Ketharaman Swaminathan, Founder, GTM360.

The funding will be used to develop sales and tech team. Besides, the start-up will also use the fund for expansion in sectors like Wellness, Adventure as well as modern Retail. "This round would ideally be used to create a playbook in Pune covering entire city across various service sectors before we launch in other cities. We are sure about our target cities and would be there soon in next few months. We plan to add wellness (spa and salons), adventure, leisure, and modern retail in next few months," informed Rajepandhare.

Notably, the founders managed to raise this round of funding within three months of their product launch. Sharing his thoughts on lessons learnt while dealing with investors, Rajepandhare shares, "There are only three things, which I feel, are important for investors to invest in your company. First, the team; Second, trust on your idea; and finally, market validation. If you have these things in your company, I don't think investors require any other metrics to fund you."

(With Inputs from Samiksha Jain)

How This Entrepreneur Is Making $30,000 Per Month From YouTube