After a Brush With Shark Tank Fame, This Woman Closed Her Business for Her Dream Franchise

A small-business owner took her original plan to Shark Tank before scrapping it and buying a franchise.

By Lydia Belanger
May 3, 2017
This story appears in the May 2017 issue of Entrepreneur. Subscribe »

Bianca Bahri grew up in the franchising world. Her parents owned multiple H&R Block units, and her family's community -- Catholic Iraqi immigrants in the Detroit area -- was full of entrepreneurs who had used franchising as a way to get settled in America. "It's all I've ever known," she says. But after she went to business school, she couldn't find a franchise that matched her passions. She's a fitness fanatic, and she wanted to help women who felt uncomfortable working out in front of men. So she decided to strike out on her own.

Related: Why This Ex-Franchisor Decided to Become a Franchisee

Bahri founded Fit2Fight Studios in Troy, Mich., ran it for two years, and even auditioned for Shark Tank in an effort to score the funding and publicity necessary to expand to more locations. But during the audition process, she heard about Burn Boot Camp by coincidence. It was, she realized, the franchise she'd always wanted. Within six months, she closed her company and opened her first Burn Boot Camp location in the same plaza as her old gym.

What made you decide to abandon your business and franchise instead?
Burn Boot Camp provided an atmosphere where like-minded women could come together, build confidence and inspire one another through fitness and positive thinking, in a supportive environment. I decided I didn't want to compete with this company; I wanted to join it.

"I felt so alone as a small-business owner. Now I have a franchise coach. I have people I can turn to."

What was the transition process like?
Last August, I was in the middle of auditioning for Shark Tank and had to make a video about myself for round two. I sent it to Devan Kline, the CEO of Burn Boot Camp. The company immediately got in touch with me, and within a week, I had flown out to headquarters and begun the process to become a franchisee. Time was tight; I needed to close my old gym on December 1 and open my Burn Boot Camp by January, because it's a huge time for fitness. We did the build-out in less than 90 days. I was really trying to expedite the process, because my clients were not working out for almost six weeks until we opened.

Related: How to Be Successful by Embracing Change 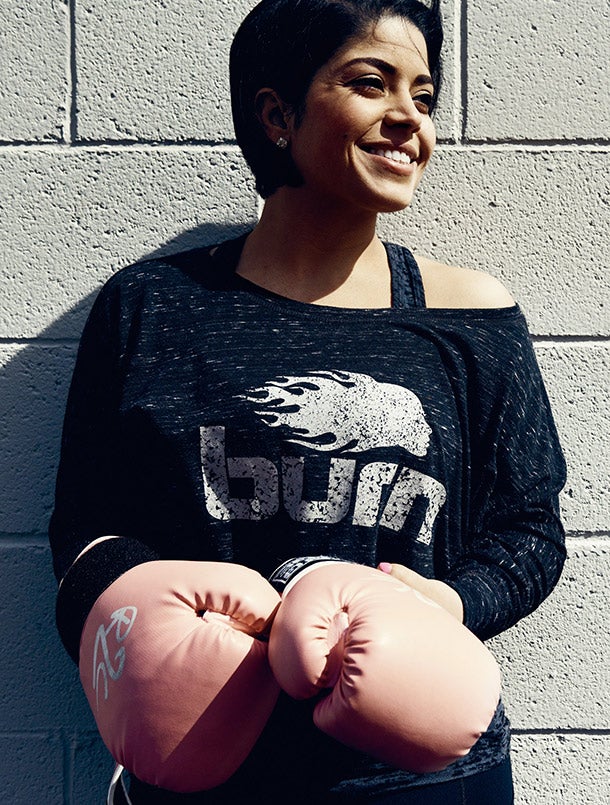 How is Burn Boot Camp -- and franchising -- different?
I felt so alone as a small-business owner. I always had my parents, but they didn't understand fitness. Now I have a franchise coach. I have people I can turn to at headquarters and ask questions. We have forums between all the franchisees. It is just so nice to have that support. And to offer women free childcare is huge -- one thing I felt I was missing for my mothers.

What are your business goals as a franchisee?
My Burn Boot Camp is located in a 7,500- square-foot suite, but I needed only 6,000. I convinced the landlord to split that other 1,500 into another suite. We are looking at putting a juice bar franchise in there. Right now I have three territories in Michigan for Burn Boot Camp, and we're hoping to launch our second location in Rochester Hills by September. I want to continue growing my territories. I would even go out of state.

What advice do you have for other business owners considering franchising?
Why try to reinvent the wheel? If you find something that is almost exactly like your company, has the same philosophy, and is everything you are but is just ahead of you, why not just join it? I love the originality of creating your own startup, but it's not easy. I truly believe that if you follow your path, it'll take you where you need to go.