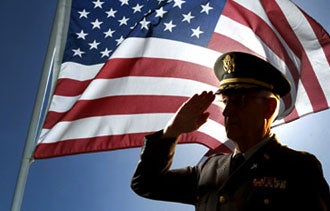 The franchise industry has long seen military veterans as particularly fit for duty as franchisees. This week, to mark Veterans Day, it's stepping up efforts to bring more returning soldiers into the fold.

The IFA says its new campaign, dubbed "Operation Eduring Opportunity," is in response to President Barack Obama's call to the private sector to offer opportunities to veterans, who now face high unemployment.

The latest efforts will be run through the IFA's VetFran program, which for years has offered vets incentives and training to become franchisees.

VetFran, made up of more than 400 IFA franchisors, says it has helped more than 2,100 veterans become franchisees since 1991. Census data and other research indicate that veterans own one of every seven franchise businesses, and that more than 66,000 veteran-owned franchises employ 815,000 people.

On its site, VetFran draws connections between the armed forces and franchises. "Vets come back with strong leadership skills and a through understanding of teams," it says. "Franchises are run on systems, just like the military."

In addition, the VetFran site notes, franchises offer support, providing a chance for veterans to feel connected again through a franchise "family."

CRAL Franchise Development Inc. of East Syracuse, N.Y., a duct-cleaning and mold-removing business, is one of several franchisors that recently joined VetFran.

CRAL wants to "help veterans maximize their military experience in leadership, team-building and dedication to accomplishing large-scale goals," President Craig Zinserling said in a statement. "CRAL is proud to support our nation's heroes in this way."

Anago Cleaning Systems of Pompano Beach, Fla., also announced this week a program to offer franchise discounts for honorably discharged veterans, via VetFran's new campaign. The company says it will provide four veterans the ability to purchase a master franchise for $9,300, when the fees for those territories usually start at $35,000.

The IFA supports the measure. In a statement, Steve Caldeira, the trade group's CEO and president, has said: "We look forward to working with the administration to ensure opportunities for veterans to own their own franchise small business."