How to Get the Most Out of a Franchise 'Discovery Day'

Prospective franchisees often begin their journey at Discovery Day events -- but not everyone makes the cut.

Bob and Kathy Summers recently stood in a warehouse in Illinois and met their future: an extended cab truck, a rolling fertilizer spreader and a backpack pest control sprayer that can squirt high up into afflicted trees.

The Summerses, who live in Cary, N.C., were attending Join the Team Day at Spring-Green Lawn Care Corp.--878 miles away in Plainfield--and had spent the morning listening to presentations by franchise executives on everything from marketing campaigns to grub control.

They'd met a key executive and talked about how much revenue an average franchisee brings in after one year. After lunch with the staff, the couple toured a nearby Spring-Green corporate operation and examined the kinds of equipment they'd need to tend to lawns and trees themselves.

The experience made an impact. Once home, the Summerses decided to go ahead and purchase an existing Spring-Green franchise. "I had a pretty good impression of the company before we went out there, but [the visit] reinforced my idea that they are an enthusiastic and honest group of people," Bob says.

"Before we went, I thought Bob was nuts to be considering this," Kathy says. "He doesn't even take care of his own lawn. Now I can see that the business is a lot more sophisticated than I expected." 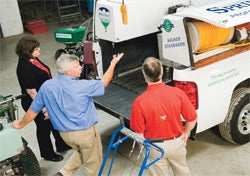 If you're looking into franchises, you, too, may be invited to some type of corporate visit--traditionally called Discovery Days because, before the Internet, prospective franchisees used them to "discover" who ran a franchise company and what products or services the company offered.

Things are different today. "Discovery is more front-loaded," says James Young, president of Spring-Green. Potential franchisees like the Summerses can watch online videos about a franchise company from home and even "meet" executives face-to-face via videoconferencing.

About half of attendees at old-style Discovery Days became franchisees, Young says, but he expects about90 percent of "Join the Team" attendees to sign on with Spring-Green, which has 127 locations in 26 states.

"More franchisors are using technology to engage people today, so candidates tend to know more and be more committed when they travel to corporate headquarters," says Jeff Sturgis, president of Franchise System Advisors in Boston. "Discovery Day has moved further into the sales process and now tends to be more of a validation day."

Of course, prospective franchisees still make some discoveries. Ted Dowdell of Columbus, Ohio, says it was a Meet the Team Day tour of TSS Photography's production facilities in Duluth, Ga., that persuaded him to buy a franchise. That's where about 75 employees process 2 million photos of school groups and young soccer, baseball and football players each year.

"They walked us through the production side and it was working like a machine," Dowdell says. "I realized why they have such a high success rate, and why they always ship the right product at the right time. If I hadn't seen that, I'm not sure I would have joined the franchise."

Sometimes, a visit to headquarters might have the opposite effect. For instance, Sturgis says, a prospective franchisee might decide not to join a franchise if its office is in disarray.

Sturgis says other red flags include hearing information that is inconsistent with what your franchise salesperson has been telling you; having executives dodge your questions; or being pressured to buy a franchise on the spot.

Before going to Spring-Green, the Summerses had attended a Discovery Day for an auto repair concept and the experience had turned them off to that franchise. "It was a smaller operation, and their corporate staff had to be jacks-of-all-trades," Kathy says. "Each person was so critical, we wondered how they'd handle it if they lost one of them."

But Discovery goes both ways, and some attendees don't join the team not because they choose not to but because they don't make the cut. While franchise executives are giving PowerPoint presentations and talking about franchisee support, they're also assessing potential franchisees. "We watch what questions they're asking," Young says. "If the same issues keep coming up, after we feel we've answered them, we start to worry."

Other franchise executives, such as Shelly Sun, CEO and co-founder of BrightStar Care in Gurnee, Ill., begin watching franchise candidates during a welcome dinner the night before Join the Team Day even begins. Candidates who drink too much are promptly sent home. "How can someone take care of seniors or children if they can't control their drinking?" she says.

"We also drop people who have a very arrogant interaction with the waitstaff, because it shows they won't be respectful to their caregivers either. And about six months ago, we uninvited a woman who said she was interested in our concept even though she finds old people annoying."

We asked several franchisors what they're looking for during Discovery Day events and talked to new franchisees about what they learned there.

To make the best use of a Discovery Day, try to determine whether you'll fit into the system's culture. "Be sure you know what they're looking for," Sturgis says. "Ask if you have the background and skill set of their successful franchisees." In other words, are you like the other people attending Discovery Day?

In today's economy, that may be a tough call, because fewer people are qualifying for franchise loans and making it to Discovery Days in the first place. Rosa Kelliher of Hanson, Mass., says she was looking forward to meeting other people in the same situation when she traveled to Georgia for a Meet the Team Day at TSS Photography.

"But I was the only one," she says. "At first I was disappointed, but by the end of the day I was glad because I had one-on-one time with all the managers and had all my concerns met."

The Summerses also were delighted to be the only ones attending Spring-Green's Join the Team Day, because Kathy had lots of questions. "I'm the marketing manager for a real estate agent and will keep my job," she says. "Bob's the one who was researching franchises and I didn't know that much about the company until we went there. He'd had corporate positions before and likes solving problems, so I wanted to be sure the business would be challenging enough for him."

"Our visit to Plainfield cemented me on Spring-Green," Bob says. "Lawn care may not be the sexiest thing in the world, but I learned that it can be fun and profitable. Of course, I'll have to deal with my own lawn first or none of the people in our neighborhood will be my customers. I'm thinking of putting a sign out there that says, 'Watch this space.'"

Julie Bennett is a freelance writer.