By Tracy Stapp Herold
March 11, 2010
This story appears in the April 2010 issue of Entrepreneur. Subscribe » 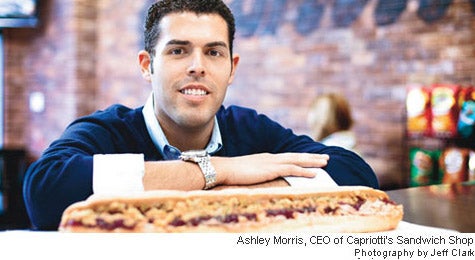 The hungry customers start pouring into the tiny sub shop shortly before noon. By the time the lunch hour is in full swing, the new Beverly Hills Capriotti's Sandwich Shop --the first California outpost since the chain was founded in Delaware in 1976--is packed with people wearing business suits and designer jeans. Employees are calling out to customers by name, inquiring about what they like, making menu recommendations, asking how many peppers they want on their sandwiches. 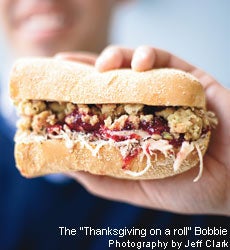 After only a week in business, word has obviously gotten out: This food is worth the wait. Capriotti's signature creations, such as the Bobbie (turkey, cranberry sauce, stuffing and mayo) and the Capastrami (hot pastrami, Swiss cheese, Russian dressing and cole slaw) are stacked high with premium ingredients. In fact, the shop slow-roasts eight to 10 whole turkeys for 12 hours every night and pulls the meat by hand fresh every morning. At $7 to $7.50 for a "small" 9-inch sub, the sandwiches are quite a bargain, too--one of the few in this tony neighborhood.

The two well-dressed ladies waiting in line have no idea that the young man talking to them about his love for the "Thanksgiving on a roll" Bobbie--which was just named the greatest sandwich in America by AOL--is actually the company's CEO. To be fair, 30-year-old Ashley Morris never expected to find himself in this position either. When he joined Capriotti's in 2004 as a franchisee, he was looking to diversify his portfolio, not change his life.

Morris discovered Capriotti's while attending the University of Nevada, Las Vegas. He fell in love with the food, so much so that he deliberately rented an apartment within walking distance of one of the company's 20-plus Las Vegas locations. Knowing that other people were just as fanatical about the chain, he figured opening his own Capriotti's was a surefire investment. So he kept his job as a money manager at Wells Fargo, and with Valerin Engler, his girlfriend at the time (and now his wife), ran the three Henderson, Nev., restaurants that they opened over the next three years.

With their stores averaging $600,000 in sales, they asked about becoming area developers. But the chain's founders, Lois and Alan Margolet, offered to sell them the entire company instead. The Margolets had managed to grow the system to 44 stores since they began franchising in 1991--largely on the popularity of the sandwiches alone, because they had only four corporate employees and ran the business out of their home. They knew the brand had the potential to go to the next level but recognized that they weren't the right people to take it there--and they believed that with his financial background, maybe Morris was.

"As soon as I heard that," Morris says, "I was fully committed." By Jan. 1, 2008, he had transformed from money manager to sandwich CEO. And though this may not be the path he had planned for his life, watching him run to fetch extra dressing for a Capastrami and wax philosophical about chicken cheesesteaks, it seems that he's found his destiny.

The Sandwich Phenom
While the last couple of years have been tough on most businesses, sandwich franchises in general have done quite well, with many even experiencing record growth. At the top of the heap, of course, is Subway, which opened more than 2,000 locations last year and saw same-store sales soar into the double digits, thanks to its $5 Footlongs. With more than 32,000 stores in 90 countries, the sandwich giant is on the verge of overtaking McDonald's in the number of restaurants worldwide.

With its current count at little more than 60, Capriotti's may seem like barely a blip on the radar screen in comparison--but it's a blip that makes people sit up and take notice.

"Capriotti's is one of those brands where people are fanatical about the food," Morris says. The quality of the ingredients and unique menu items, along with the employees' enthusiastic interaction with customers, makes Capriotti's feel more like an independent East Coast deli than a nationwide chain.

And that combination of quality and service has garnered Capriotti's quite a following--one that's been helped along by the advent of social media. Facebook, Twitter and Yelp were abuzz with comments when the Beverly Hills store opened in January. Many L.A. residents were familiar with the chain from weekend trips to Las Vegas and were excited to finally have one in their own backyard.

One fan, Omar Khashen, proudly blogged about arriving at 9:45 a.m. on opening day and waiting in the rain to be the first to eat a Bobbie made in California. The new store quickly won new fans, too. On Capriotti's Facebook page, which has 14,000 fans and growing, one person posted, "There are many sandwich shops in this world yes, but there is only room enough for one in my heart and that's Capriotti's! Thanks for showing me what a real sandwich should taste like!"

That following has helped Capriotti's weather the recession with ease. "Our average gross sales are north of $725,000 per store," Morris says, "and that's including the good, bad and the ugly." In fact, the poor economy has been more of a blessing than a curse for Capriotti's, especially when it comes to finding prime real estate--such as this location, on Wilshire Boulevard, just three blocks from Rodeo Drive. "In a great market, this opportunity just wouldn't exist."

Despite its devoted following, Capriotti's has stayed relatively small until now, with most of its stores around where the two former owners lived, Delaware and Las Vegas. "When we purchased the company, there was little if any infrastructure," Morris says. "What we were buying was a 34-year-old name, fantastic recipes and a handful of stores."

New Order
Morris and his team spent two years rebuilding the company's infrastructure, from technology to training to distribution. They even redesigned the look of the stores, giving them a cozy neighborhood feel with brick-covered walls, checkerboard trim and small indoor and outdoor seating areas. "We really reinvented the entire company," Morris says. "Now we're ready to really take on the growth."

In fact, Morris is anticipating 500 locations by 2015. A lofty goal, but he is confident. After all, Capriotti's secret to finding franchisees is the same as winning customers: Just let them take a taste. That's what worked for Wayne "Buzz" Knyal, co-owner of the Beverly Hills shop. As the former CEO of Franchise Mortgage Acceptance Co., he had spent years lending money to franchisees but never thought he would become one himself.

"It was really the food that did it," Knyal says. He partnered with Don Ghareeb, one of the largest Taco Bell and Sonic Drive-In franchisees in the nation, and now that their first location is up and running--with $25,000 in sales in just its first week--they're hoping to open 20 more in Los Angeles County in the next two years and as many as 80 in the next 10.

California isn't the only state getting its first taste of Capriotti's. Wisconsin area developers opened one in Milwaukee in November, and Oregon, Tennessee, Iowa, Minnesota, Missouri and Texas are all expected to see their first Capriotti's this year.

Of course, a hankering for the Bobbie isn't the only thing that Morris is looking for in franchisees--that would hardly narrow down the field. He's seeking people with restaurant and franchise experience, and, with the credit market the way it is, people who have the resources to supply on their own the $300,000 it takes to get a Capriotti's store off the ground. With the area developers he's attracted, he expects to have 20 to 25 new stores open by the end of 2010.

But he says that growth will never come at the expense of what drew him--and so many others--to Capriotti's in the first place: the quality of the sandwiches. "Part of our core values as a company is the quality of the food and the customer service," he says. "And our values drive us in all of our growth and all of our operations. The way we train, the way we teach our franchisees how to operate, the way we design our stores and the way we make our food will never change."

Although his dreams for the sandwich chain are high, he also knows what he doesn't want it to be. "We'll never be on every corner," he says--undoubtedly a nod to Subway, which does in fact happen to have a location just a few doors down from the Beverly Hills shop. "We're more of that jewel that people seek out." And that's exactly how he wants it to stay.