Andy Carlson left a cushy corporate life to open an Ace hardware--then transformed the store into a magnet for hip urbanites. 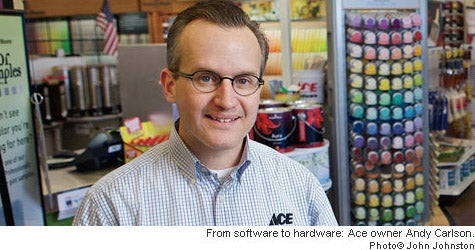 Andy Carlson had the corner office, the expense account and the big title: vice president of marketing for PeopleSoft. But he was growing weary of the grind, and when Oracle mounted a hostile takeover of PeopleSoft in 2004, Carlson cashed in his stock options and looked around for something new. "I have two little boys, ages 9 and 10," he says. "They had no idea what I did in software, and I couldn't explain it to them. I want them to grow up with something they can understand."

That something turned out to be an Ace Hardware , which Carlson opened just south of downtown Denver in Alameda Station. But Carlson's 18-employee store is more than screws and two-by-fours. He's used his marketing prowess to tailor the store to its urban location.

"Andy's been unusually good at reading the local market and reading customers," says Ross Alvord, market development manager for Ace. "He increased sales 27 percent in this recession. I rank him among the best I've ever worked with."

Carlson's niche marketing includes a barbecue section that is the envy of Denver, a huge housewares department, a garden section geared to smaller yards and a paint department that synergizes with the Denver Design Center next door.

How did you make your store unique?
Ace is a co-op, so we have a lot of independence to do what we want. So many hardware stores are old and tired and dirty. We made ours bright and inviting and keep a very clean walk out front. We try to appeal more to women and younger people. I like the downtown urban feel of the store. I wouldn't want to do a store in the suburbs--there's still a lot of growth left down here.

How has your marketing experience helped?
I knew from my software days that no one ever looks at the stuff in their mail, and the center section of the newspaper is crap people throw in the recycling bin. So my idea was door hangers. When we opened, we hung 38,000 really nice glossy hangers with some great coupons in a 3-mile radius from the store. I figured people would at least look at them before they threw them away. We had a 27 percent response rate in our first week, and sales have never dropped since. I did it again in the spring and we got another 10 percent bump.

What other strategies do you use?
We do a lot of aggressive sales. For instance, our promotion of 49-cent windshield wiper fluid. We pay $1.42 for the bottle, but it drives amazing traffic. Our annual sale of 99-cent four-packs of flowers drives thousands of people into the store. You can't be afraid of losing money on those products--you have to look at it as a marketing expense. The most important part is having great customer service so they get everything they need, not just windshield washer fluid.

How do you motivate staff?
The best money I've spent is giving sales bonuses. I put a sales target in place, say $10,000, and for every $500 we make past that, every employee gets a $5 bonus. During Christmas I give a bonus for the biggest sale of the week. Some employees are really good at selling big barbecues or large paint orders. It gives them a chance to get something back. In software, when I managed marketing and sales, we wanted awards for employees to be tangible and immediate. The scale is different--they were selling $3 million software packages--but the concept is the same.

So how does a hardware store compare with the executive suite?
This store is never going to pay like my old job, but we're following our plan and doing well. We've put $100,000 back into the business on top of startup costs--stocking new lines of paint, expanding the greenhouse, buying a new delivery vehicle, improving our e-commerce. My salary my final year at PeopleSoft was bigger than the entire payroll for my store. But my lifestyle is much better now.