Yes, You Can Be Creative in Franchising

By Tracy Stapp Herold
July 31, 2015
This story appears in the August 2015 issue of Entrepreneur. Subscribe »

"Our emphasis is on creativity and imagination," says Dawna Kelly, a Detroit-area Abrakadoodle franchisee. "You don't have to draw your tree like my tree; the sky is not always blue."

She's talking about the Sterling, Va.-based company's approach to teaching art to kids, but the philosophy fits her approach to business, too.

Kelly, who runs the venture with her husband, Al, began thinking outside the box when choosing a franchise. Looking at her credentials—a former financial analyst for Ford and management consultant for Microsoft with degrees in computer science and finance—one would not expect her to pursue a career in children's art education. But Kelly sees it as a natural fit.

"Every job that I've had, the most enjoyable part of it was teaching. So while it seems like a completely different ballgame going from tech and finance to what I'm doing now, it's still teaching," she explains. "I'm passionate about education and how it can change your life, so Abrakadoodle just seemed like the perfect franchise for me."

Cost was also a factor in the decision. Like many Abrakadoodle franchisees, the Kellys were able to start their business for less than $50,000. "We knew that we'd have to make an investment, but we weren't prepared to make a six-figure investment," Kelly says. 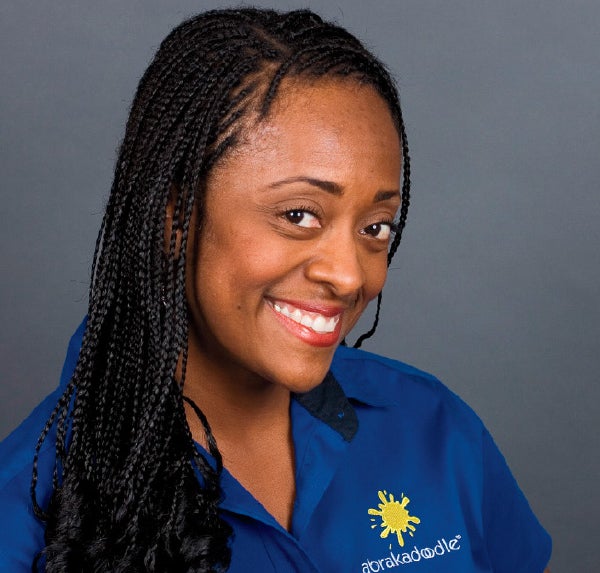 When it came to making that investment profitable in the Detroit area, the Kellys believed they'd need to color outside the lines. While the majority of Abrakadoodle franchisees primarily offer after-school enrichment programs paid for by parents, the Kellys chose to focus on obtaining contracts to provide art classes for local schools.

Their strategy paid off when the recession hit shortly after they opened in 2007. "Parents may or may not have been able to afford after-school programs," Kelly recalls, "but there were a lot of schools that still wanted to have a quality art program and could still afford to do so." Especially with Abrakadoodle, which offers schools the option of holding classes up to five days per week.

Today the Kellys oversee a staff of 26 teachers serving as many as 30 schools. And after successfully riding out the recession, last year they decided to open a studio to satisfy parents' demands for art-themed parties and after-school classes. Meanwhile, other franchisees are beginning to emulate their model of focusing on school partnerships—and for good reason. The Kellys were recognized last year as Abrakadoodle's highest-grossing franchisees.

Though she never questioned her choice of franchise, or her decision to run the business differently from her fellow franchisees, Kelly is still surprised by the results.

"I had no idea that Abrakadoodle would be as successful for us as it has been. We thought it would be maybe five to 10 schools, something just to replace income. But it turned out to be much bigger than that, financially as well as personally," she says. "The kids, when you see them doing their projects and you see all the things that they learn—they light up. And I light up as well."