'Dream Jobs Are DEAD': Quiet Quitting is the TikTok Trend Encouraging Employees to Take It Easy at Work

Young professionals are learning to say 'no' to more and 'yes' to less as they face burnout. 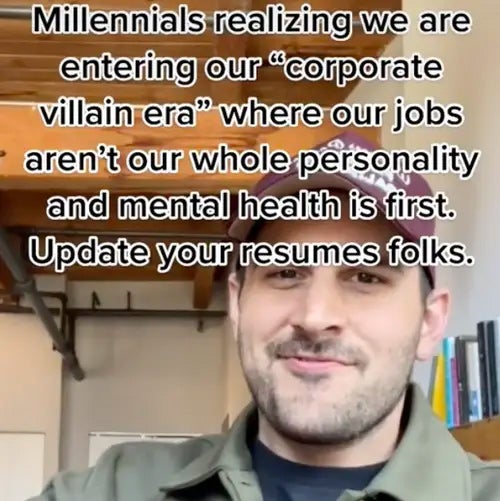 As Gen-Z enters the corporate world and millennials begin to experience burnout, never going above and beyond on the job is the latest trend young professionals are following.

The trend of "quiet quitting" on TikTok is taking off as millennials encourage the upcoming generation of employees to avoid overextending themselves at work.

Josh Bittinger, who works at a management consulting company, explained to the Wall Street Journal that the idea of "quiet quitting" is less about being lazy on the job and more about avoiding burnout at work.

The whole idea of taking it easier at work is about learning to stop saying "yes" to everything, and to say "no" when you need time for yourself, according to Bittinger.

A 2022 global workplace report from Gallup determined that only 21% of employees were engaged at work, and most didn't find their work meaningful following the pandemic.

That statistic is apparent in content posted by TikTokers under the app's corporate hashtag. Thousands of users praise viral videos discouraging anyone from going the extra mile on the job.

The Guardian speculates that the online trend could owe its origins to Chinese social media where the hashtag #TangPing, which means "lying flat" and refers to the country's typically long work hours, was censored by the government, according to the report.

One user brought up a quote circulating at her workplace: "'Hard work is rewarded…with more hard work,'" the comment read.

Another TikToker encouraged fellow millennials to update their resumés as they entered the "corporate villain era" of putting their mental health first.

"The idea of dream jobs are DEAD," one commenter wrote. "I only dream about leisure time and having enough money for coffee every morning."