Sarah Max
November 7, 2011 min read
Opinions expressed by Entrepreneur contributors are their own. Despite a cool economy, chicken-wing franchises are red-hot.

Chains that sell everything from traditional deep-fried Buffalo wings to more gourmand varieties (think mango habanero or Caribbean jerk) increased units by an average of 5% in 2010 – more than double the rate of food brands as a whole, including pizza or sandwich shops, according to FranData, an Arlington, Va. research firm.

In Minneapolis, Buffalo Wild Wings says its same-store sales for the third quarter are up 4.8% from a year ago. Wingstop, a Richardson, Texas, franchise that’s been on a growth spurt since 2009, plans to open its 500th store before year’s end. And East Coast Wings & Grill, based in Winston Salem, N.C., has seen 30 consecutive quarters of same-store growth.

Franchisors say chicken wings, which trace their roots to Anchor Bar Restaurant in Buffalo, N.Y., are no longer viewed as just “pub grub” or something for sports fans to eat on game day. These days, customers tend to be families looking for an inexpensive night out and busy professionals wanting an easy solution for dinner.

“It’s a great alternative to pizza and Chinese food,” says Deborah Serls, who worked in neurological testing before opening a Wing Zone franchise last month in Savannah with her husband, Jeremy. The couple, who were already “huge Wing Zone fans,” decided to become franchisors after Jeremy lost his corporate job. They liked that Wing Zone offered four weeks of training at company headquarters in Atlanta where “you’re thrown into the kitchen,” she says.

Similarly, Stephen Sullivan of Hoboken, N.J., was a Buffalo Wild Wings fan but could only find the chain when he traveled. In November 2009, he put together a team of investors and opened New Jersey’s first Buffalo Wild Wings franchise. He has since opened a second location and secured the rights to five more. The tough economy hasn’t seemed to hurt business. “People want a little bit of an escape,” he says. “They can come here, have their wings and cold beer, and not break the bank.”

Some franchises – there are nearly two dozen in the chicken-wing category, including a host of relatively new franchises such as Atomic Wings and Hurricane Grill & Wings – are differentiating themselves with flavors that run the gamut from sticky sweet to stupidly hot. Others are marketing healthy wings or kid-friendly options like chicken fingers or mac and cheese.

Still, could all this be a passing fad – or could the market be headed for a wing glut? Not likely, says Peter Schwarzer, FranData’s director of research. “Chicken wings are here to stay,” he says, pointing to the fact that a number of major franchises, including Pizza Hut and KFC, have added chicken wings to their menus. He likens the category to burgers, adding “we still see new hamburger brands come out the gate.”

That said, the challenge for any industry enjoying growth is to handle it well. Chicken-wing franchisors need to work hard at “attracting the best qualified franchisees, and providing them with the necessary support structure and a long-term brand strategy,” he says.

Potential franchisees, meanwhile, must grapple with steep costs of entry – startup fees for Buffalo Wild Wings can run as high as $3 million – and the challenges of running a restaurant, from handling food to providing quality service.

Plus, with so many newfound wing varieties, franchisees will want to choose the concepts best positioned to, er, take off in their market. 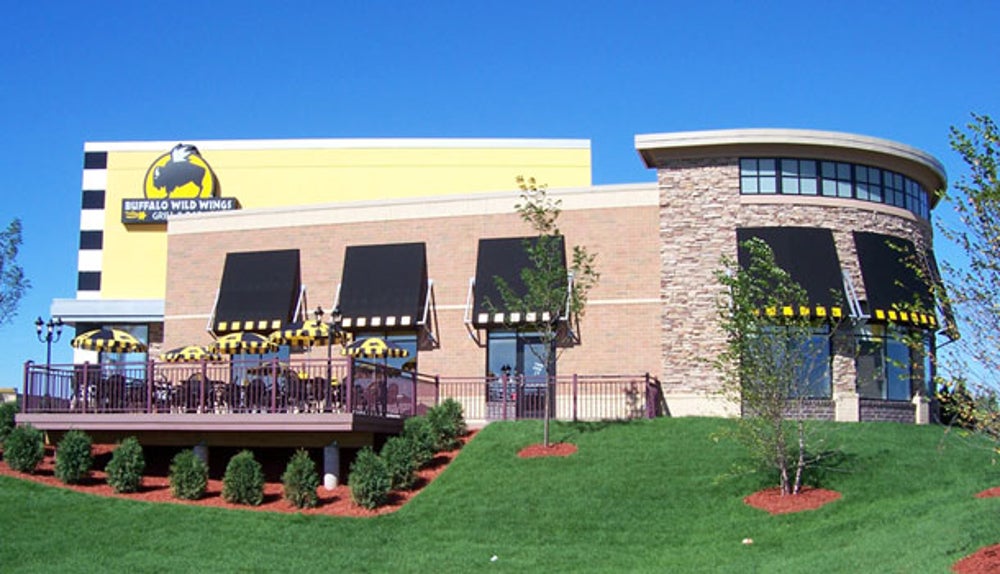 An early-comer to the wing movement, Buffalo Wild Wings Grill & Bar was founded in 1981 when founders Jim Disbrow and Scott Lowery sought to bring Buffalo, New York-style chicken wings to Kent, Ohio. Today, customers head to “B-dub” sports bars to customize their wings with signature sauces and dry rubs, order from a full food and drink menu and watch the game on giant flat screens. Since the beginning of 2009, Buffalo Wild Wings, which is publicly traded, has added nearly 170 franchise locations to its growing empire. During the third quarter of 2011, weekly average sales at franchised locations rang in at $51,350, a 4.8% increase from the same time last year. 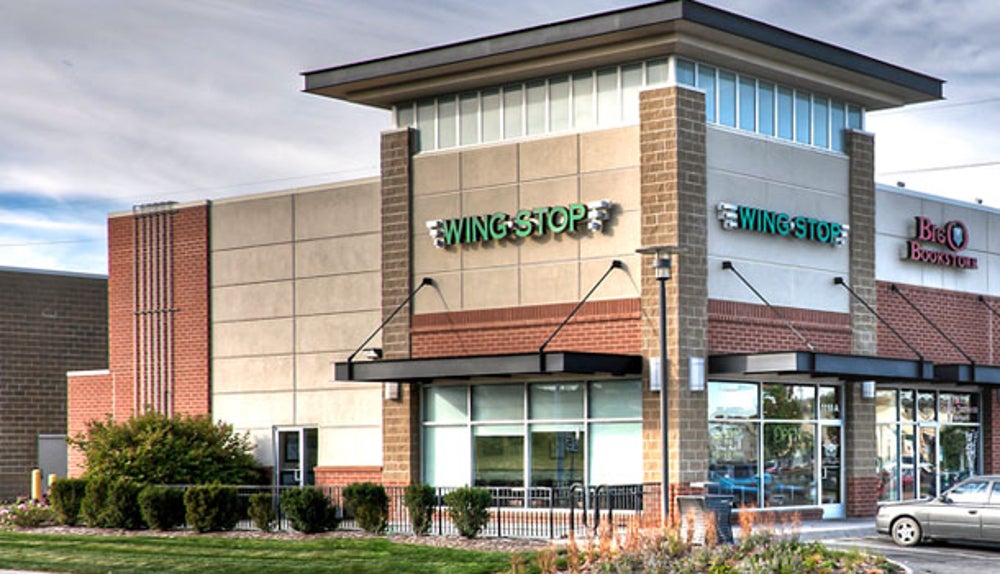 Having opened nearly 120 new locations since early 2009, Wingstop is on track to open its 500th store before the end of the year. The company, which is endorsed by three-time Super Bowl champion Troy Aikman, has seen eight straight years of same-store sales growth. Chalk it up to busy families looking to pick up made-to-order wings and homemade side dishes on the way home for work or during half time. In fact, roughly 75% of sales are carryout. As such, the space, typically 1,350 to 1,600 square feet, tend to be smaller than other wing joints and require a smaller staff. 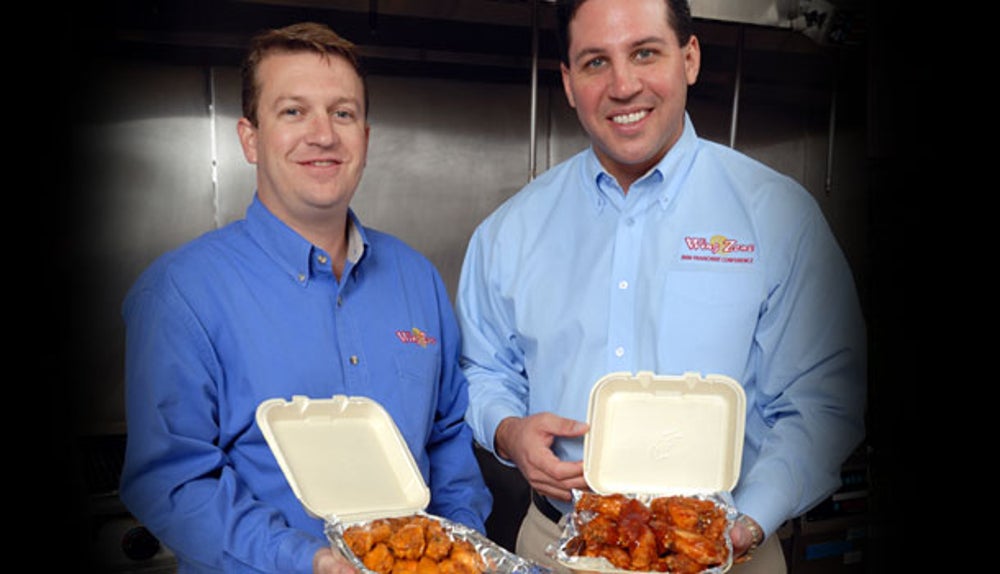 Twenty years ago Wing Zone founders Matt Friedman and Adam Scott started cooking up batches of wings in their University of Florida fraternity kitchen and delivering them around campus. These days customers can douse their wings in one of 15 fab flavors – which can be added to just about any item on the menu – and dine in, carry out or get their wings delivered to their doorstep. Online ordering, real-time dispatch and intelligent routing make sure wings are fresh and hot when they arrive. The concept is even catching on overseas. Wing Zone has franchised locations in the Bahamas, Japan, Panama and Saudi Arabia, and dozens of other international locations are in the works. 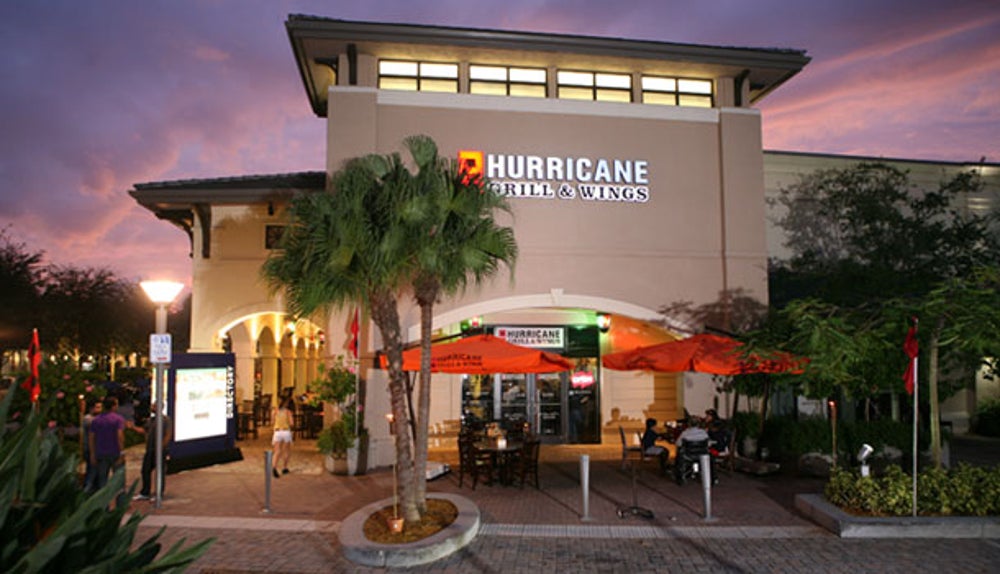 If you haven’t heard of Hurricane Grill & Wings, that may soon change. This fast-growing franchise has more than 400 signed commitments to open locations in 25 different states over the next eight years. Whereas many dine-in restaurant franchises insist on building from the ground up, Hurricane helps its franchisees identify existing space in prime locations in order to save on the upfront costs – and maximize the return on investment. That said, all of the restaurants are decked out in an island theme and serve Hurricane’s wings, which were a festival favorite at the 2011 National Buffalo Wing Festival in Buffalo, New York. 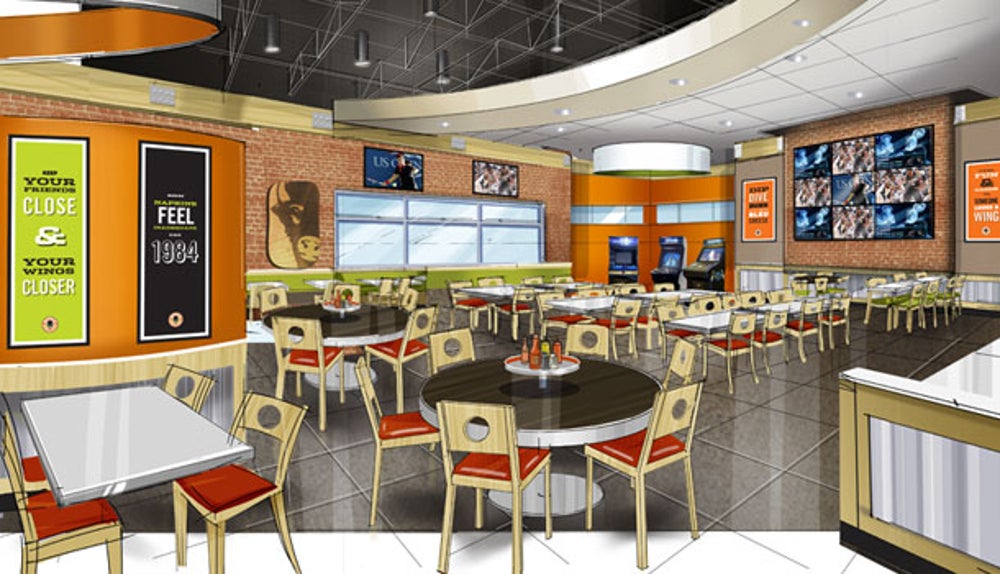 Since opening its first location in 1984, Buffalo Wings & Rings has sought to differentiate itself from the classic wing joint or the sports bar that just happens to serve wings. Families and the lunch crowd are made to feel as at home as Monday Night Football fans, and the food isn’t just the sideshow. Think homemade blue cheese dressing and meals served on actual plates. The recipe is working. Average sales per location ring in at about $2 million, and the company is forecasting a 10% increase in sales volume. 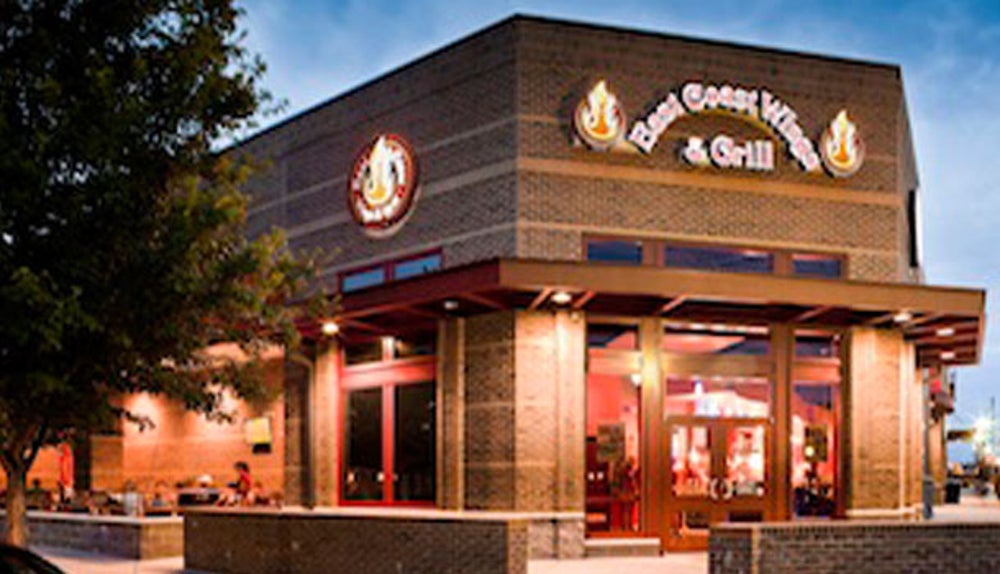 This North Carolina success story is taking its twist on wings across state lines with new franchises opening in the southeast and beyond. East Coast Wings focuses less on big screen televisions and beer sales and more on winning over families and post-collegiate professionals. Wings are the main attraction – with 75 different flavors – but diners also have their pick of a full menu of sandwiches, salads, fajitas and more. The recipe seems to be working. The company has seen same store sales growth for more than 30 consecutive quarters, with net sales averaging nearly $1.3 million. 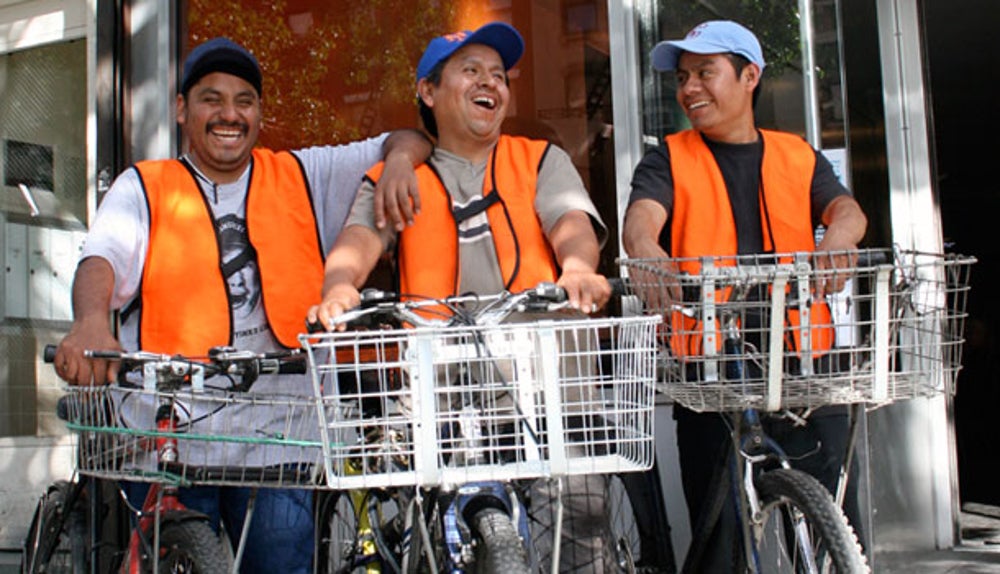 In 1989 Atomic Wings started introducing New Yorkers to authentic Buffalo-style wings when it opened its first location on the Upper East Side of Manhattan. The company not only prepares wings using the same technique that originated in Buffalo in the 1960s, but it gets its wings from that fine city. The locations are more streamlined than the typical wing joint and cater to a more urban crowd. Health-conscious customers have plenty of options too, such as grilled “Chicken Littles” and veggie burgers. Atomic Wings’ “express model” offers an affordable option to bring wings to an existing business, such as bars, delis and pizza places. 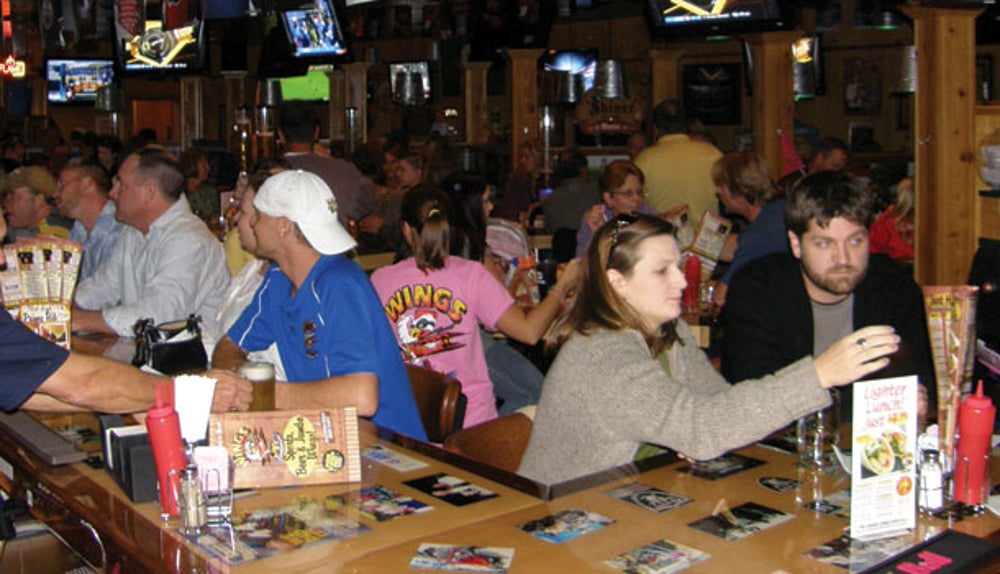 Wings Etc. is a classic sports bar model, and it’s not afraid to flaunt it – or make fun of it. Its “Redneck Chickens” ad campaign even features “fowl-mouthed” chicken puppets talking about the virtues of simple food prepared by simple people. Jumbo wings are a house specialty, a point made clear by servers sporting “Size DOES Matter” T-shirts. Light-hearted marketing aside, franchises have seen consistent same-store sales growth, even during the recession, and lower start-up costs than most full-service concepts.