9 Portable Hard Drives That Are Worth the Money


With all our computers, phones and cameras, we create a lot of data. And while there are plenty of cloud-based options for storing all the information you generate, many people prefer something they can physically touch.

A portable hard drive can give you plenty of control, while still making it possible to carry your data around in your bag. But which drives make it easy to transfer files to them in the first place? And which ones will survive the trips you take them on?

We've taken a look at some of the better portable drives available now to find out which ones have the right stuff. 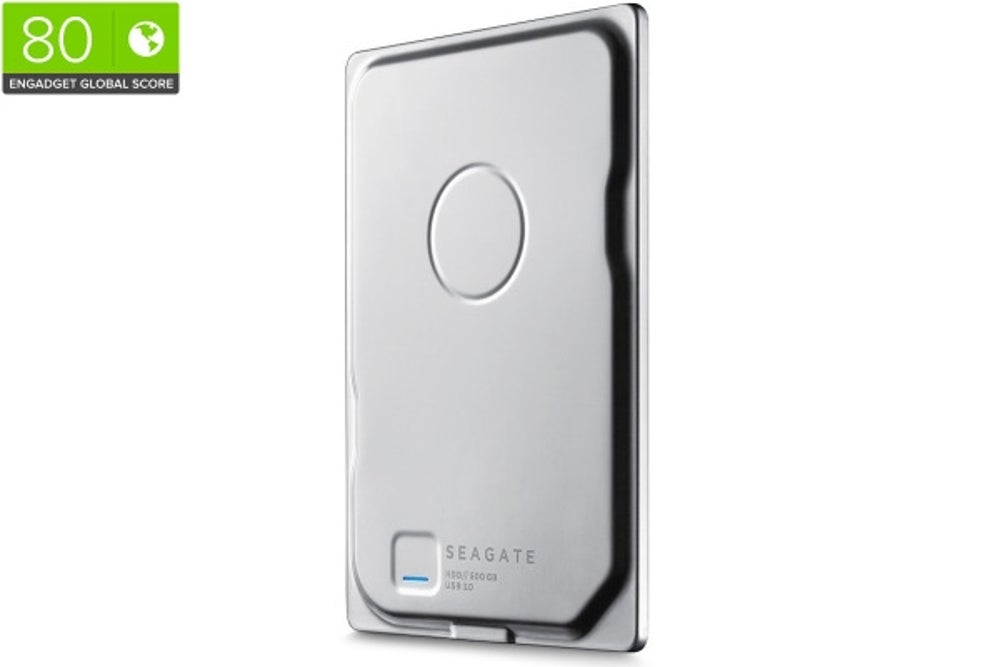 The Seagate Seven looks like it belongs on the inside of your computer, due to its utilitarian casing that hugs the 5mm drive inside so tightly that the total thickness is only 7mm. Computer Shopper says it reminds them of "Han Solo frozen in carbonite," and despite being so thin, it "feels more substantial" than rival drives housed in plastic casings. And, while PC Mag notes that its transfer speeds are "adequate, but not very fast," CNET says you'll probably still "want it for the cool design alone." 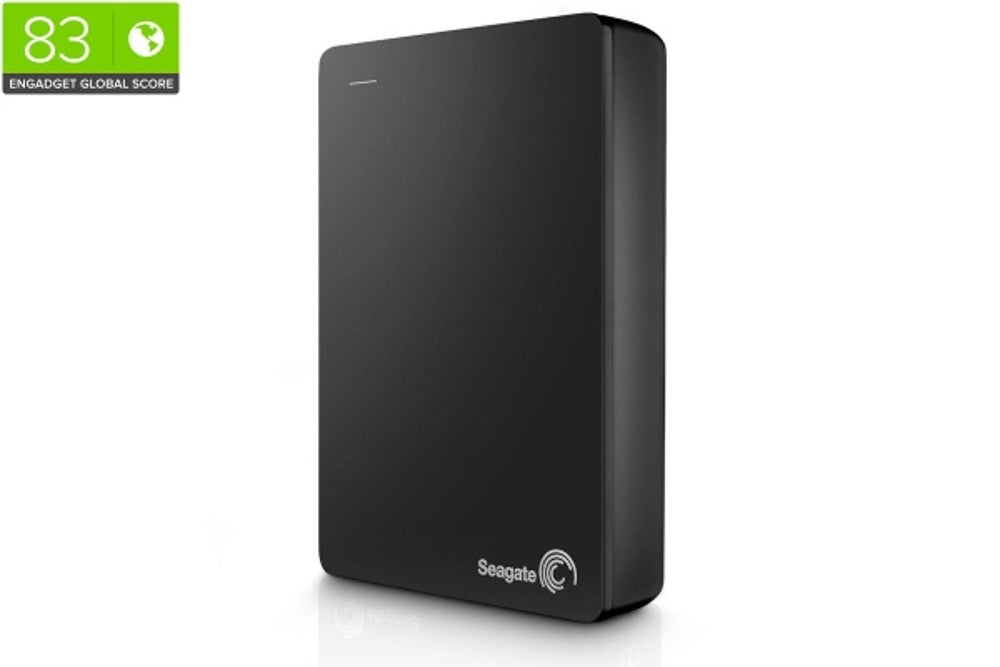 The Backup Plus Fast is a portable drive for those who need something big, but still fast for their files. The largest one has 4TB of storage spread between two internal drives that delivered "zippy write speeds and average read speeds" for Computer Shopper, which may not match up to SSD speeds, but still serve up "as much speed as you can squeeze out of platters." Sure, if one of the drives fails, it's not user replaceable, but StorageReview notes this sort of setup is not uncommon for portable drives. Besides, you can at least take comfort in its three-year warranty. 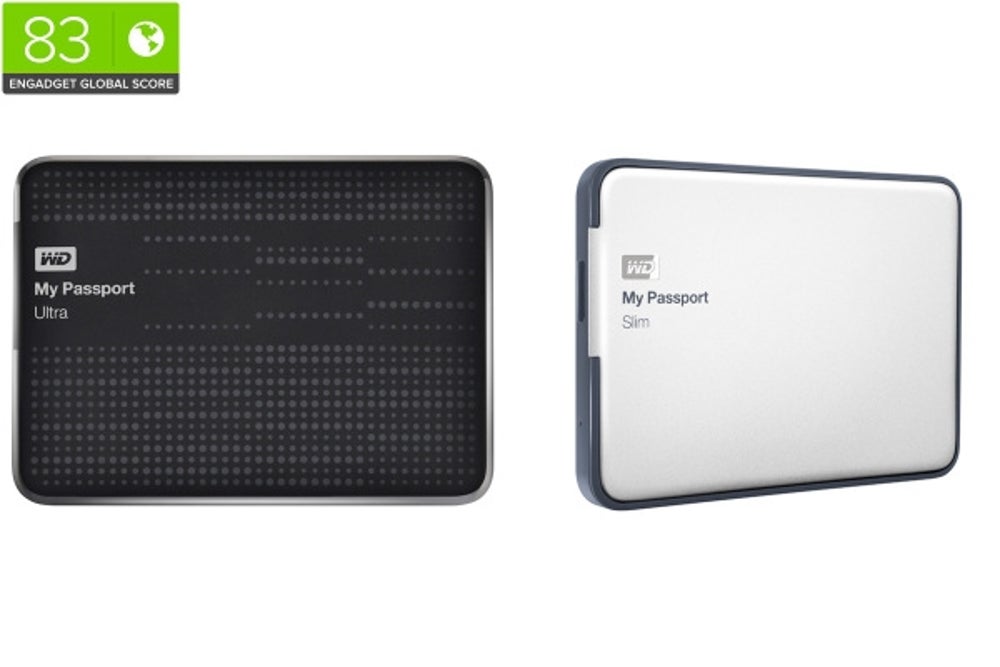 The My Passport Ultra and My Passport Slim are siblings that share a lot of traits, but each offers a little something special to distinguish it from the other. The My Passport Ultra is billed as the faster of the two drives, with speeds "almost twice as fast as any other portable USB 3.0 disk" Expert Reviews has ever seen. And the My Passport Slim has a sturdy aluminum exterior that TechRadar says is "light and easy to carry." However, the Slim also offers decent "top tier" speeds according to Let's Talk Tech, and Computer Shopper says the solid construction means it will "hold up to the rigors of travel" more than the plastic-encased Ultra. So the My Passport Slim does appear to be a slightly better buy... if you're willing to fork over a little more dough. 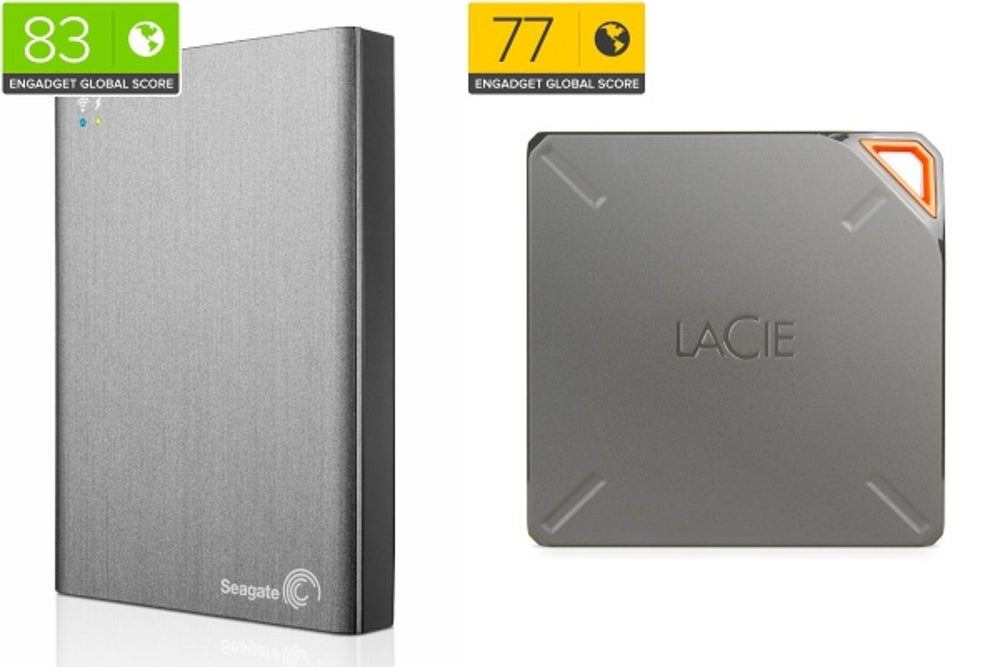 The Wireless Plus might be wire-free in every way, from its Wi-Fi capabilities to its built-in battery, but that doesn't mean you have to sacrifice performance for convenience. Computerworld got "respectable" transfer speeds out of it, and as a media server, Wired says playback was "flawless and basically buffer-free." Laptop Magazine got almost four hours out of the drive's battery, meaning you can squeeze in two movies or a few episodes of your favorite drama before having to plug it in. If you want something a little more rugged, the Fuel from Seagate-owned LaCie is the same drive in a tougher package that you should feel comfortable throwing in your bag. 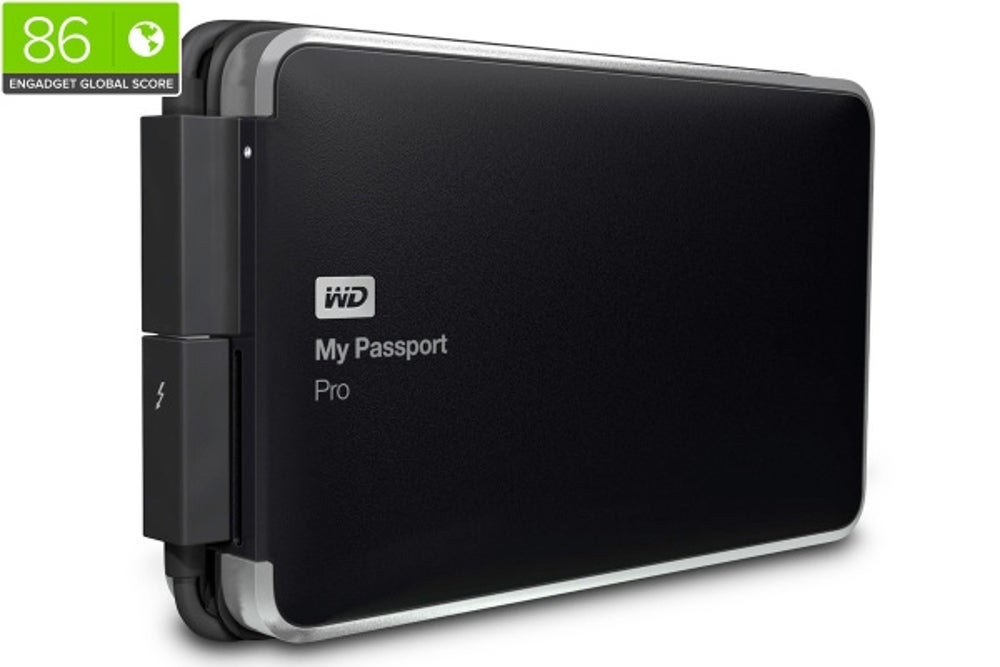 The My Passport Pro is a serious drive for serious users, offering 2TB or 4TB of storage that can be configured for RAID 0 or RAID 1 using the included WD Drive utility. This offers more advanced users a bit more flexibility, although PC Mag notes you "don't necessarily have to use it if you're simply storing data." Regardless of how you configure it, TechRadar says it offers "double the data-transfer speed compared to a single-drive device." This is thanks, in part, to its Thunderbolt connection, which is your only option for connecting to the Pro due to its lack of a USB port. 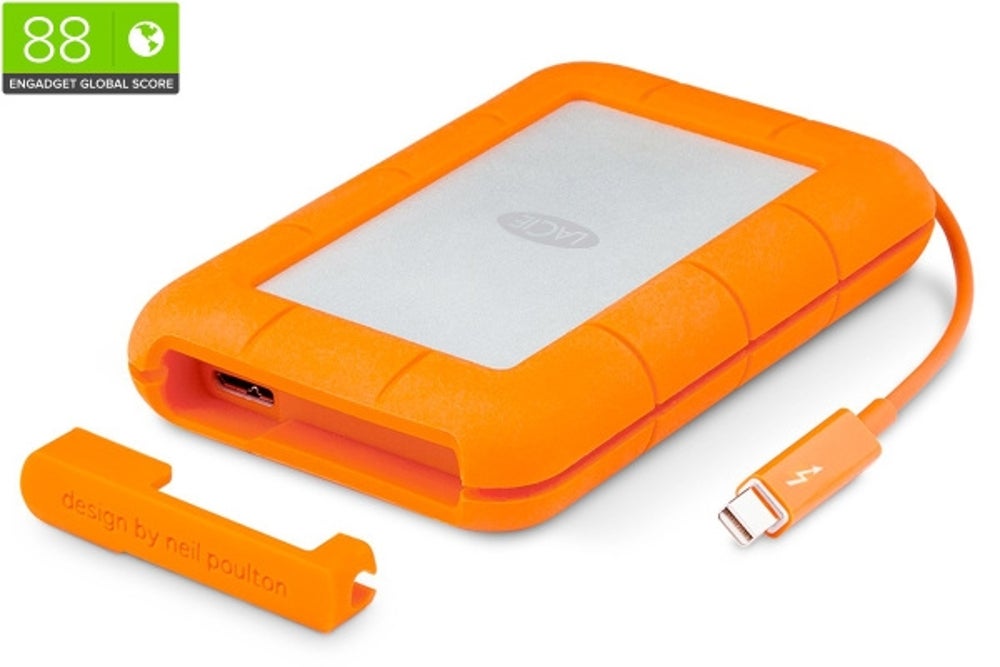 Image credit: Engadget.com
If you're looking for a Thunderbolt drive you can take anywhere, the Rugged Thunderbolt has you covered. Its design is utilitarian and even a little flashy thanks to the bright orange bumper that surrounds it. That rubber bumper not only offers "a certain amount of bounce" that TweakTown says helps with impact protection, but also packs in a built-in cable so you'll never be caught without a cord. And with PC Mag reporting "blistering throughput numbers," you'll want to plug it in and use it all the time. 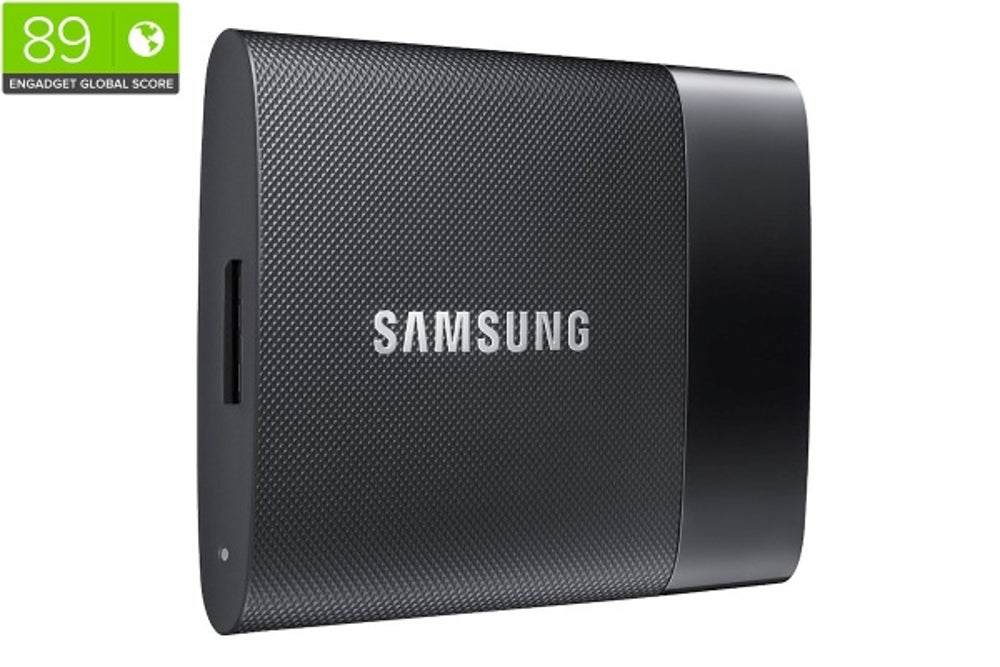 Computer Shopper says the Portable SSD T1 is smaller than a business card and ChipChick likened its size to a credit card, but whatever object in your wallet you compare it to, the T1 is tiny. And, despite its diminutive package,Computer Shopper notes the SSD T1 packs "scorchingly fast" speeds that managed to top almost all of AnandTech's benchmarks. CNET ultimately feels it "raises the expectation of what a portable storage device is capable of," with TrustedReviews calling it a "desktop-class SSD packaged inside a portable frame." 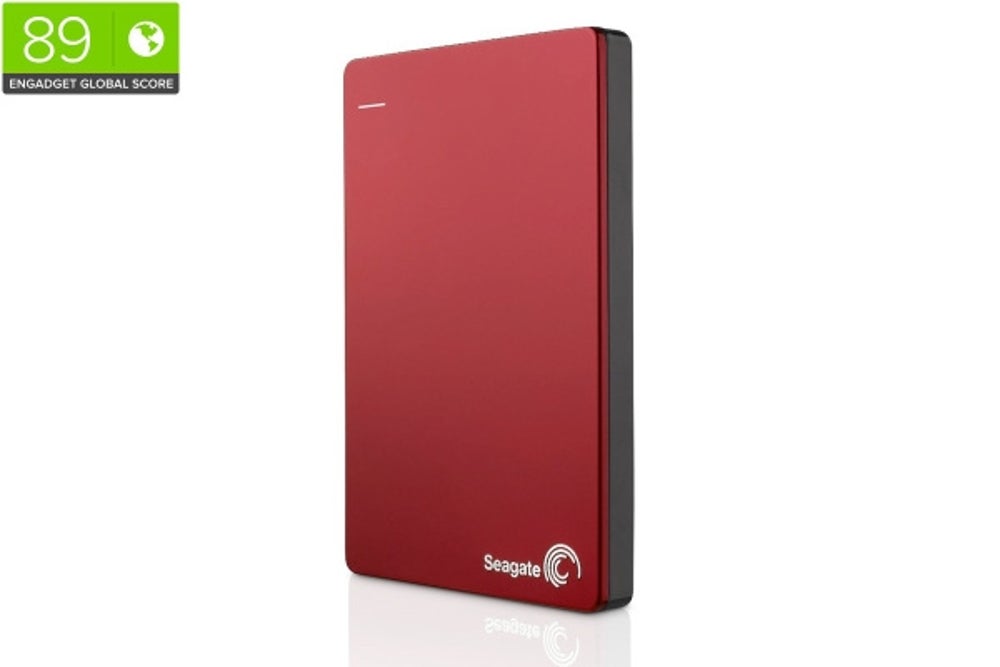 The Backup Plus Slim doesn't have the same storage size or speed as the Backup Plus Fast, but that all works to its advantage, with a "compact and light" build that The Wirecutter says takes up "minimal bag space without adding much heft." It's certainly more stylish, with a "slick-looking case" that Computer Shopper found attractive and a metal finish that can stand up to normal wear and tear. The Slim might not be as zippy as its larger sibling, butComputer Shopper found it was still "the second-fastest drive" of the ones they tested, meaning that if speed is paramount, you'll be well-served by either drive in the Backup Plus family. However, if you need something that's also pocket- (and wallet-) friendly, the Plus Slim has more to offer. 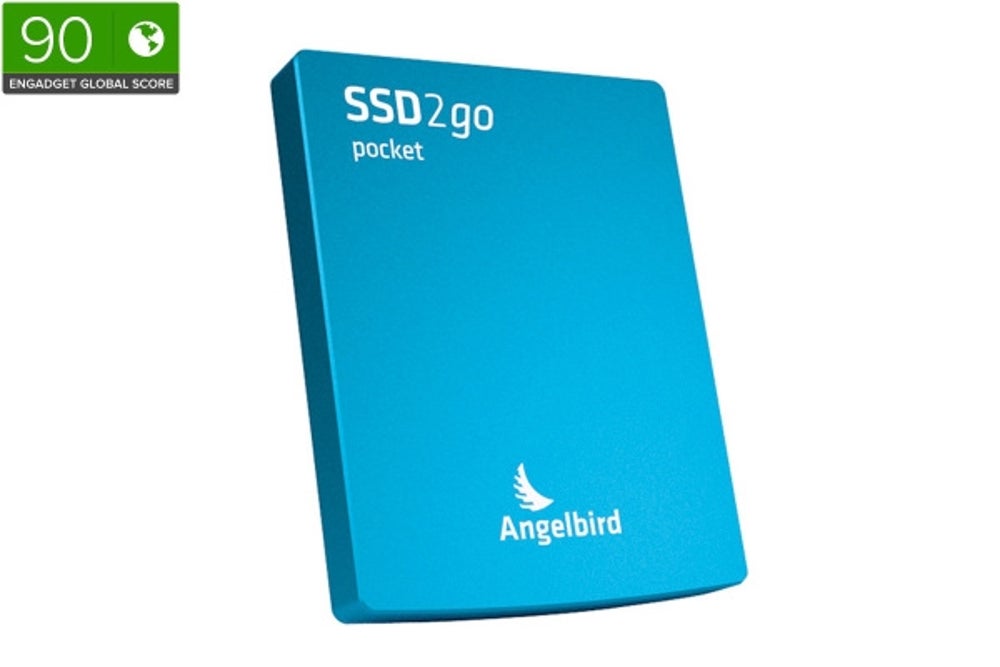 Angelbird might not be one of the marquee names in the storage business, but with the SSD2go Pocket delivering "pretty impressive" performance that made it one of "the fastest external storage device[s]" Forbes has ever tested, maybe it should be. And, although Forbes also notes the drive is "smaller than most SSDs you’d find in PCs or laptops," nothing about the SSD2go is second-class. It comes clad in a CNC-machined aluminum housing that The SSD Review finds "capable of taking all the abuse you can give it," while Forbes says they'd be perfectly comfortable with throwing it out a second story window due to its sublime and sturdy build quality.

How to Free Up Space on Your iPhone or iPad

Get 2GB Free From Google Today With a Quick Security Check

How to Maintain Security When Employees Work Remotely

Security Trends Your Company Needs to Embrace in 2019