Here are some of the coolest companies from around the world we spotted at MWC.
Next Article

Submit your email below to get an exclusive glimpse of Chapter 3: “Good Idea! How Do I Know If I Have a Great Idea for a Business?
Rob Marvin
Associate Features Editor
March 3, 2017 8 min read
This story originally appeared on PCMag


Mobile World Congress presents a rare opportunity to take in the staggering global scale of startup innovation, all in one place. Startup founders, engineers and technologists from every corner of the world descended upon Barcelona this week seeking customers, investment, partnerships and publicity for each company's Next Big Thing.

There are hundreds of startups exhibiting across the eight cavernous halls of the Fira Gran Via. We cover U.S. startups all the time, so at MWC this year we spoke to companies from almost every corner of the globe, across the Americas, Europe, Asia and Africa (we didn't find any startups from Oceania). We couldn't possibly include every company and country represented at the show, but after scouring the show floor, we've put together a diverse collection of some of the most innovative and outside-the-box startups from all over the world.

These tech startups span everything from augmented reality (AR), security and IoT to artificial intelligence, location services, mobile payments and beyond. We even found some startups using technology to help deaf and handicapped users. Check out the slideshow for the most interesting startups we found at MWC. 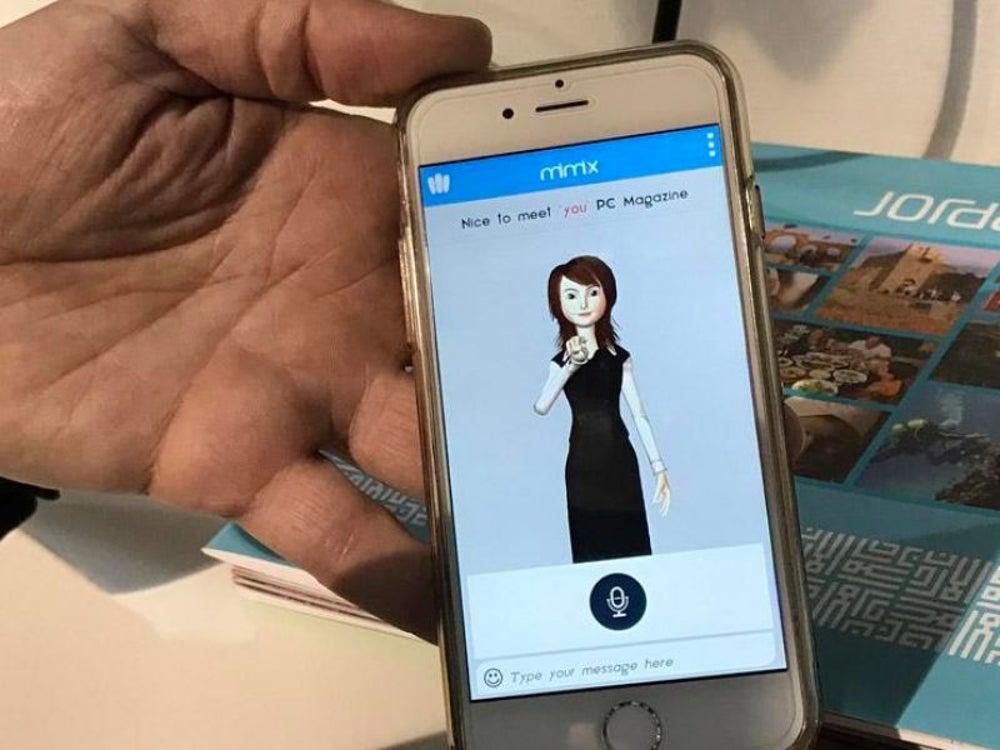 According to the World Health Organization, 80 percent of the deaf community cannot read or write. Mindrockets, a startup based in Amman, Jordan, provides assistive technologies for the deaf in voice recording, book readers and YouTube videos. Mindrockets translates speech and text to sign language in real time using a 3D avatar that signs on the screen. Officially launching at the Seedstars Summit in April, the technology is available as a free app for Android, iOS or as a browser extension. According to the company, the app has accrued about 54,000 users over the past year, with 45,000 of those coming from the U.S. 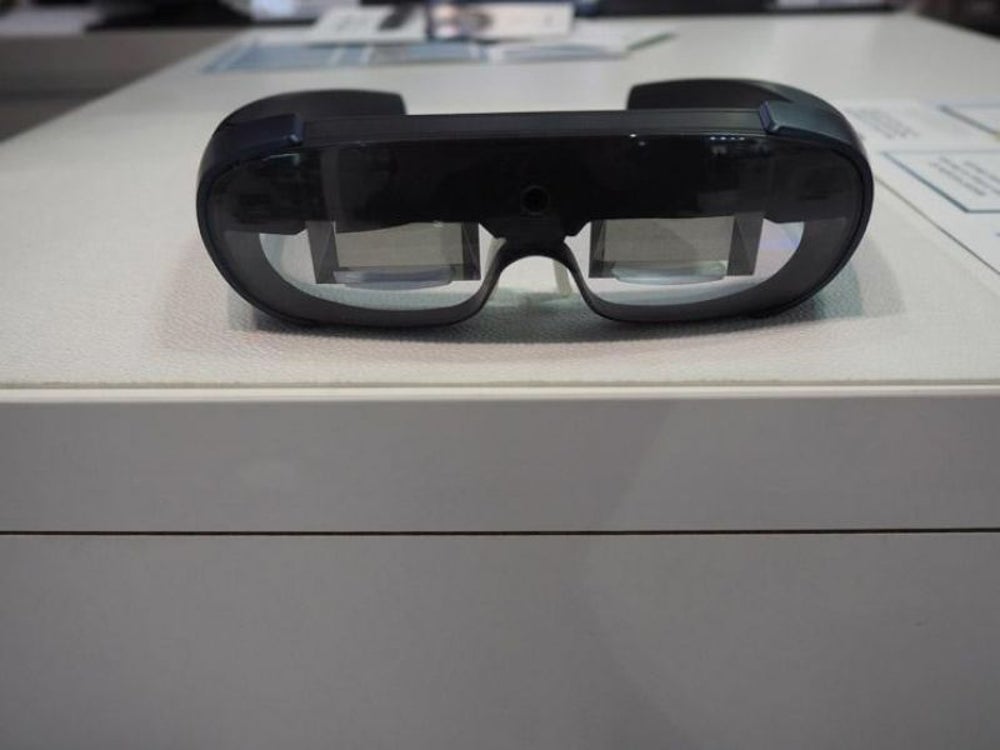 Of all the AR companies at the show, Seoul-based MAXST was the one providing the sort of immersive mixed reality experience that most resembled the promise of Magic Leap. The Revelio AR smart glasses (above) have a similar feel to Microsoft HoloLens, and the startup promising an "AR magic spell" at their booth has also built an AR/VR video conferencing platform and a 3-D SDK for headset and smartphone-based AR applications. 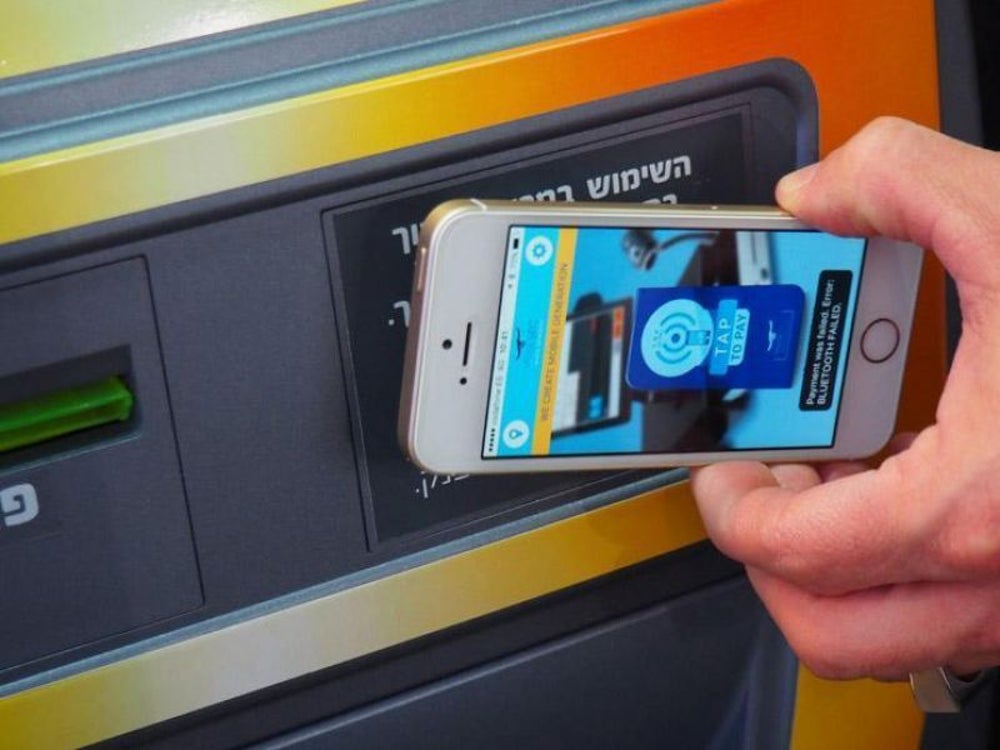 Wisesec is a Haifa, Israel-based startup enabling mobile payments and location-based commerce in some outside-the-box ways. The company works across a number of verticals, but at the show the startup was showing off its point-of-sale capabilities for imbuing legacy systems like gas stations and ATMs with near-field communication (NFC) technology under the surface, so customers can tap their phone for a mobile payment. Rather than investing in a solution like Apple Pay, Wisesec works to retrofit existing infrastructure. 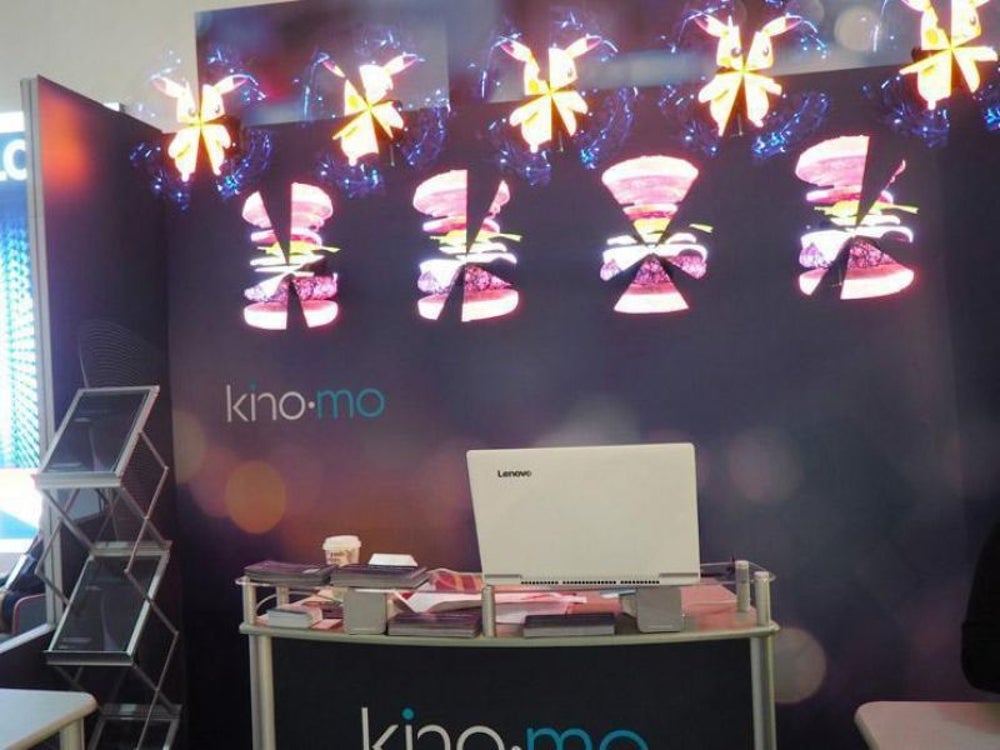 This London-based advertising media startup, which is backed by investors including Mark Cuban and Richard Branson, developed a 3-D hologram platform called Hypervsn. Designed for retail, entertainment, advertising and events, Hypervsn projects high-res holographic visuals rendered from images you can upload to its cloud-based content management system (CMS). When I walked up to the booth, I came face to face with a spinning futuristic array of holographic hamburgers and Pikachu figures (seen in the image above as blurs, as the camera couldn't quite process the hologram). 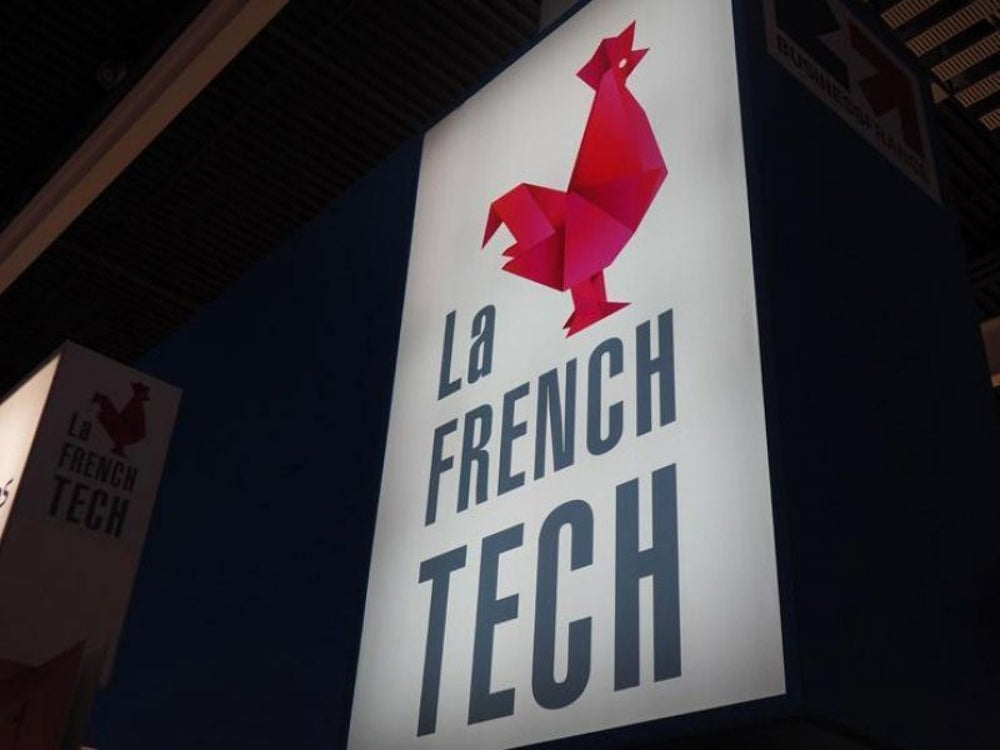 Teach on Mars is a French platform for creating mobile-optimized learning applications. The startup lets businesses build online courses and learning games designed for mobile, and gathers analytics that feed back into the business. It's a cool next-gen eLearning authoring tool. 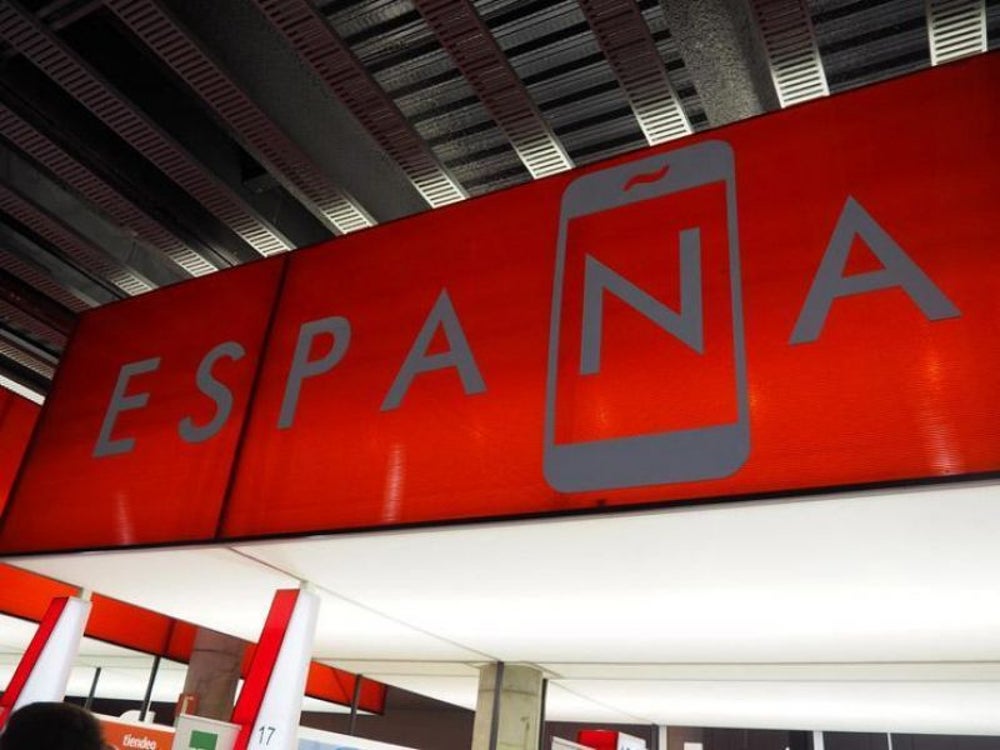 Cigo is a Barcelona-based startup born out of the Polytechnic University of Catalonia that does interactive fleet management without any sensors or hardware. The smart mobility platform analyzed geolocation data to plan routes, interact with drivers and use data visualization tools to analyze large data sets, apply mobility policies and do real-time re-routing using graph analytics. 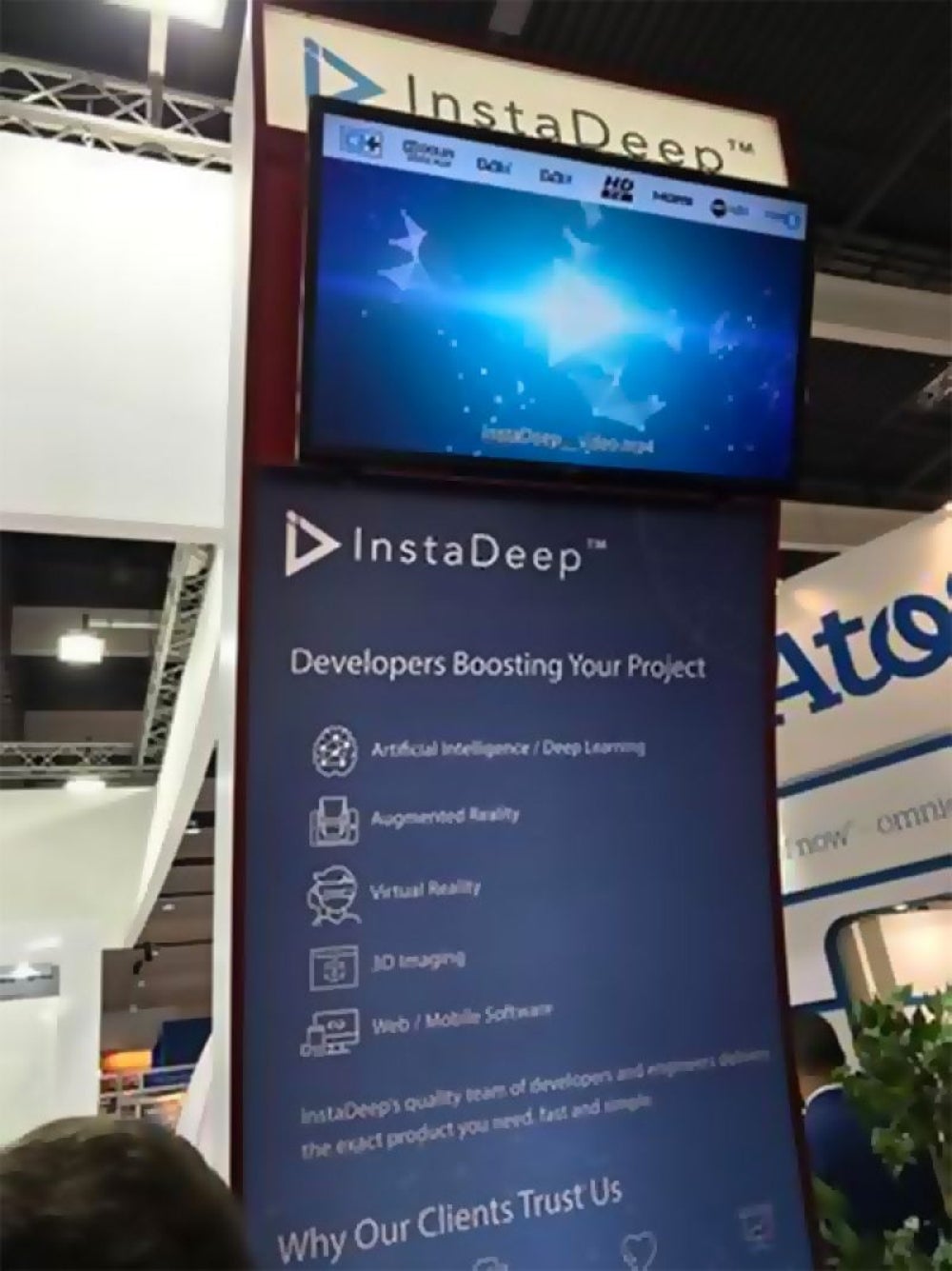 Instadeep is one of the first AI startups in Africa. Based in Tunis with an office in London, the team of developers, 3-D engineers, sound artists and data scientists takes on a few projects at a time, helping small to midsize businesses (SMBs) create customized apps incorporating computer vision, predictive analytics, 3-D imaging, AR/VR and deep learning. 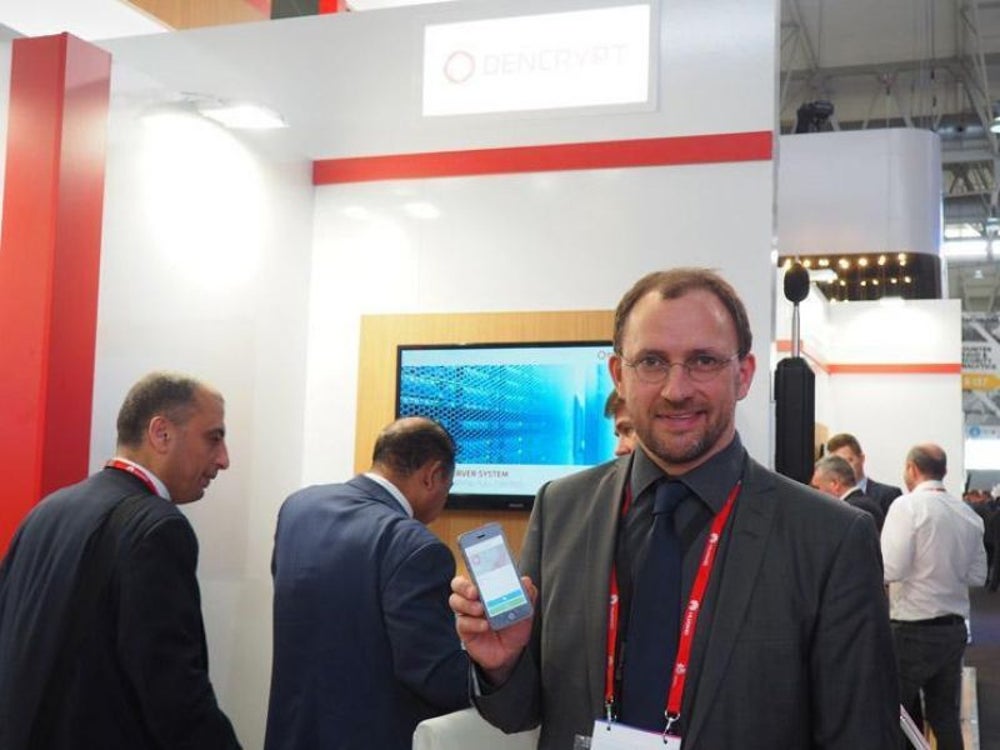 Based in Copehagen, Dencrypt is an end-to-end encryption system that adds an extra layer of security atop AES with an algorithm that dynamically mutates. From an attacker's perspective, the surface looks different from session to session. The startup has an encrypted messaging app, an encrypted server product and also offers an encrypted voice-over-IP (VoIP) service, which the company is currently implementing in the Danish Department of Defense. 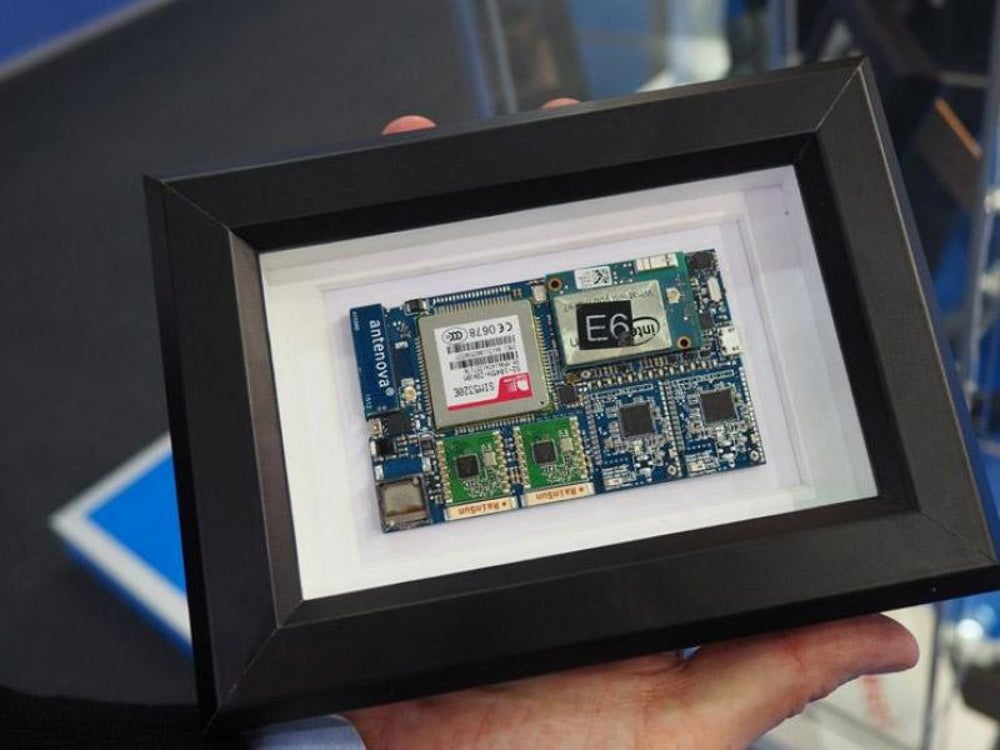 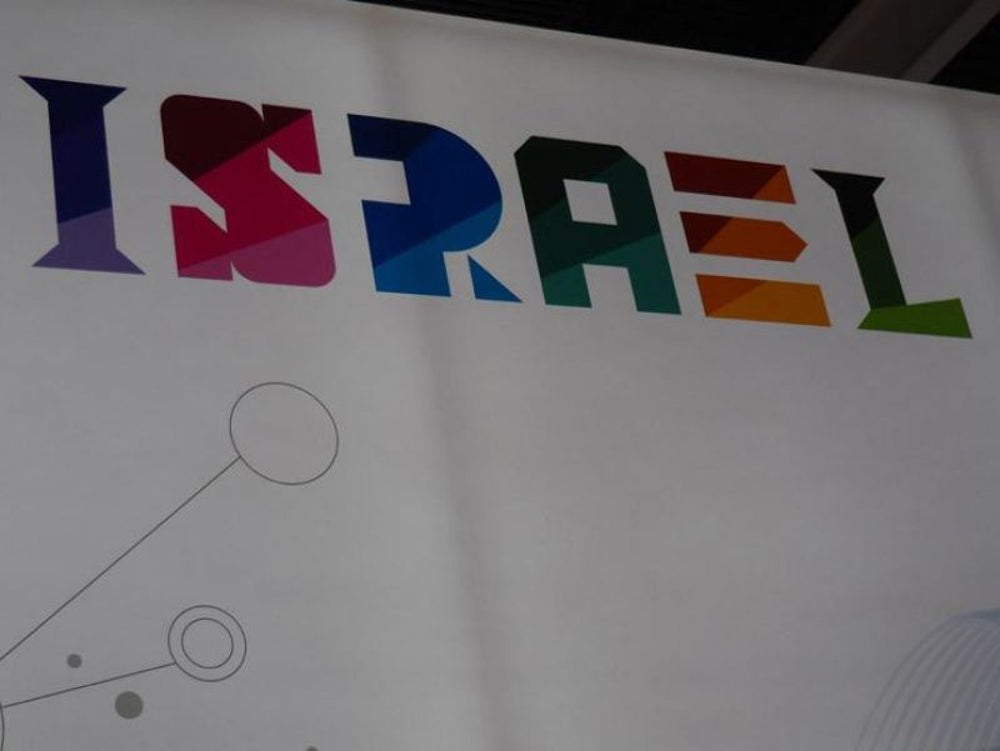 Neura is an Israeli startup using machine learning to add security and user privacy mechanisms atop IoT applications. Neura wants IoT devices to learn from user behavior to contextualize and personalize how permissions and privacy work. For example, if Neura is integrated into multiple connected devices, a smart lock on the user's front door might trigger when the homeowner's fitness tracker senses its wearer has fallen asleep. The user can also control data privacy and permissions for each connected device from the Neura app. 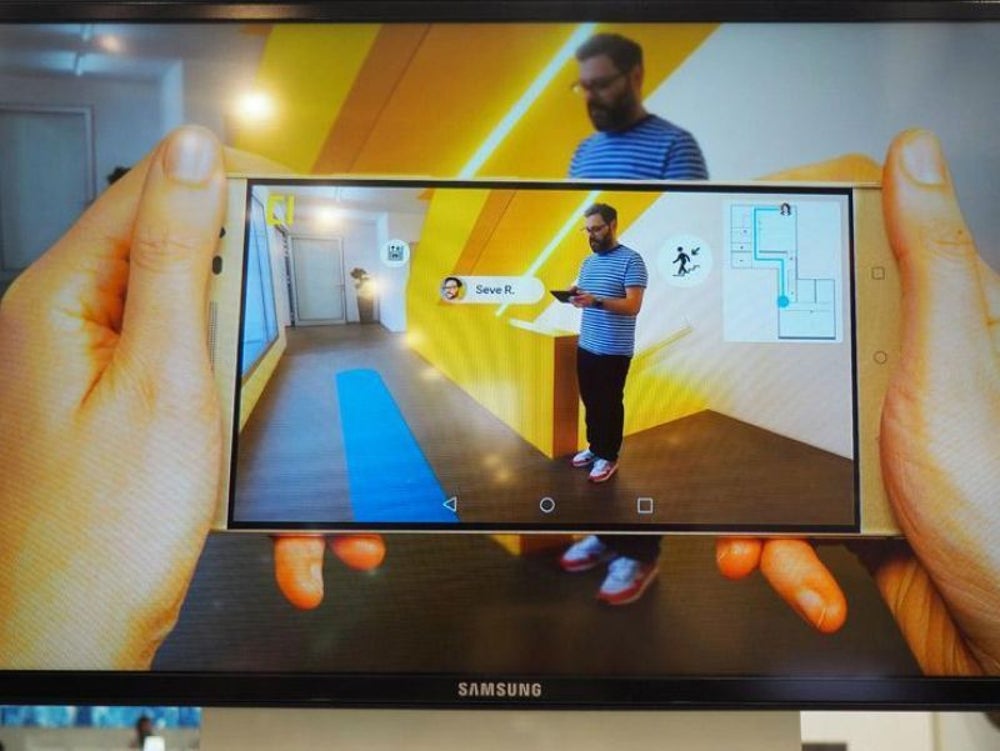 Cologne Intelligence designs IT applications for businesses like smart mobile scanning apps, but its latest technology makes use of Google Tango's 3-D depth sensing technology for indoor navigation and autonomous route calculation. Since Tango software uses software-based area learning and spatial mapping rather than smartphone beacons, the startup's motto at the show is "no beacon, no cry." 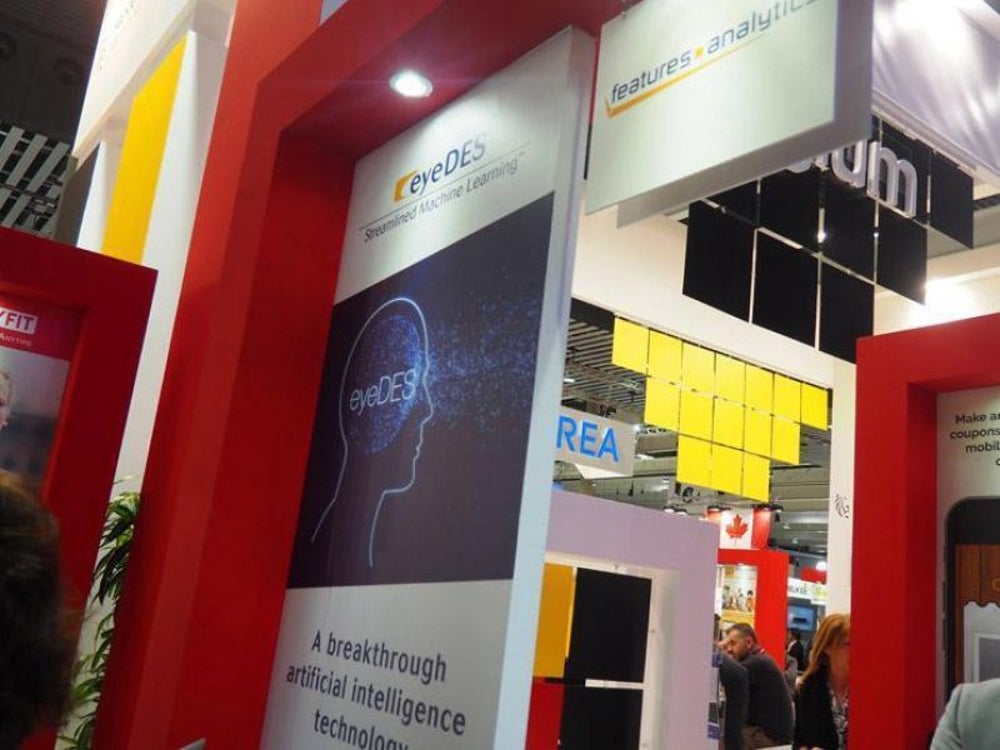 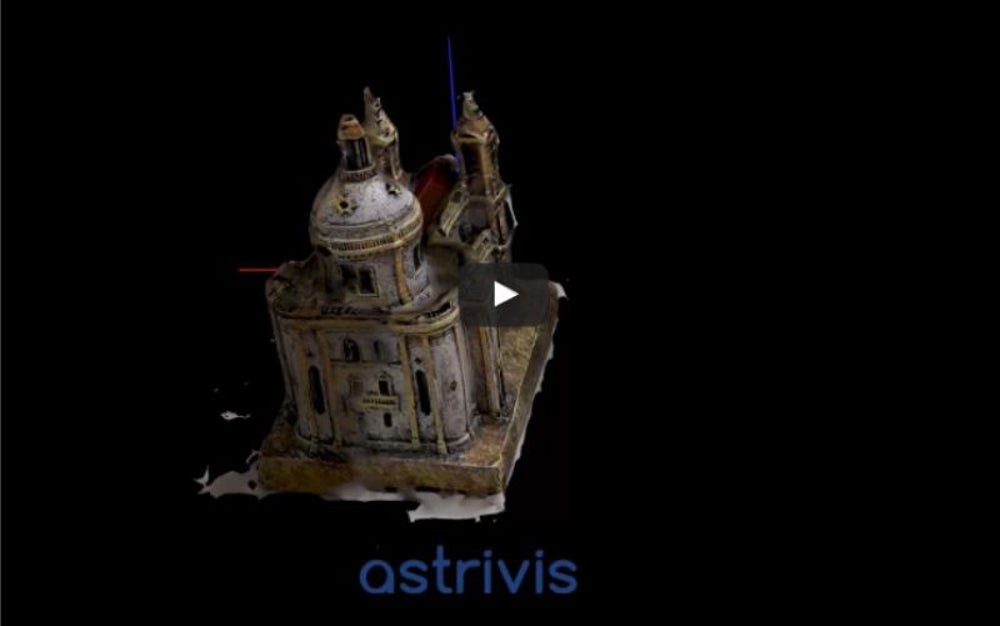 Astrivis is a mobile 3-D scanning app that can scan a 3-D object and build a model within 10 to 15 seconds. Based in Zurich, this startup launched in 2016 and is currently still testing and prototyping its app for use cases like ecommerce modeling and scanning. It's also prepping a free Your 3-D scanner app, set for release this year. 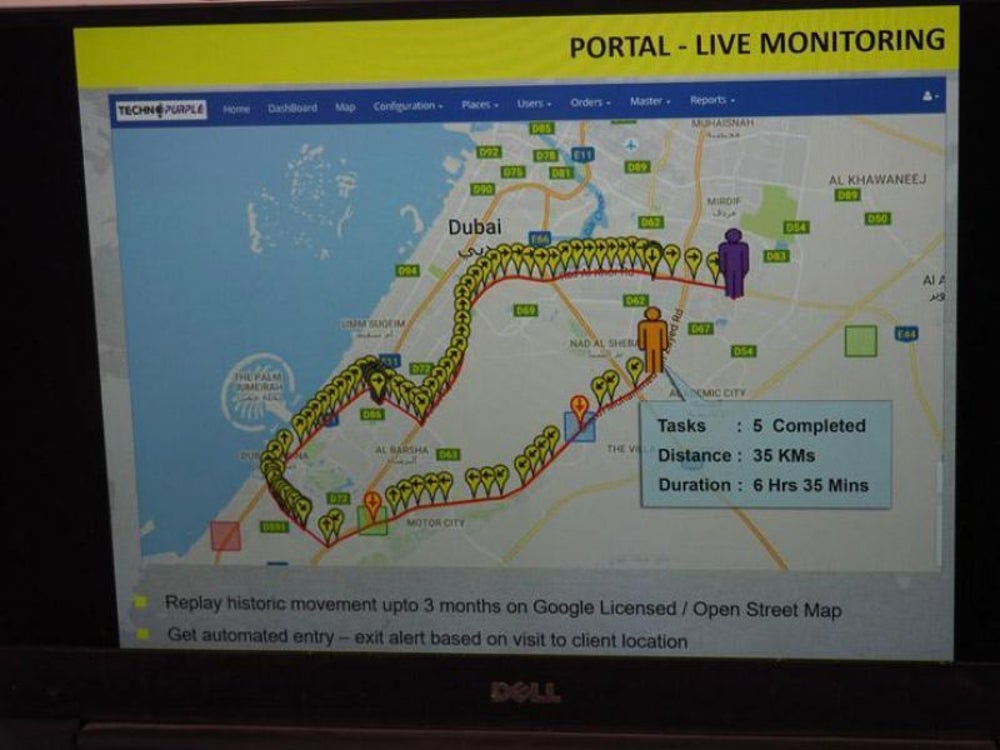 Based in Mumbai, Technopurple uses GPS tracking in smartphones and vehicles to give managers a real-time productivity monitoring app for employees. Available for Android, iOS and web, Technopurple's Effy app includes a live monitoring dashboard mapping employee locations integrated with Google Maps if your salespeople are out in the field, and includes analytics and route planning to improve efficiency. 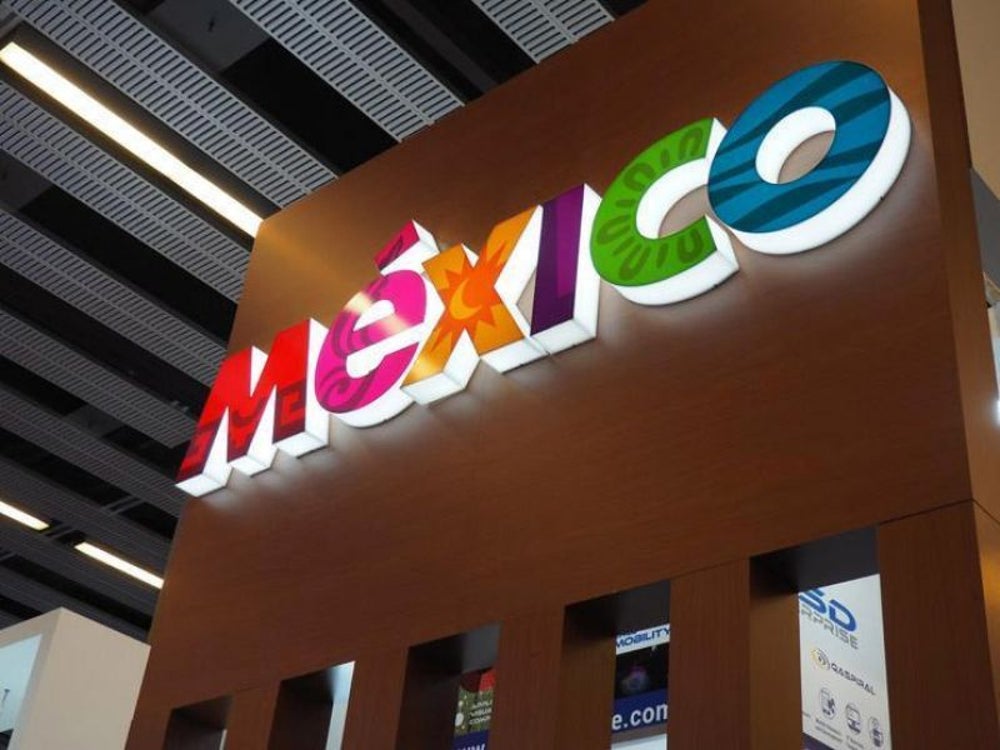 SmartSoft America BA is a software logistics company based in Mexico, with offices in Puebla and Tlaxcala. SmartSoft was at MWC showing off Stow, its automated shipping software, which does 3-D cargo mapping in freight containers to optimize space and plan out more efficient shipping routes. 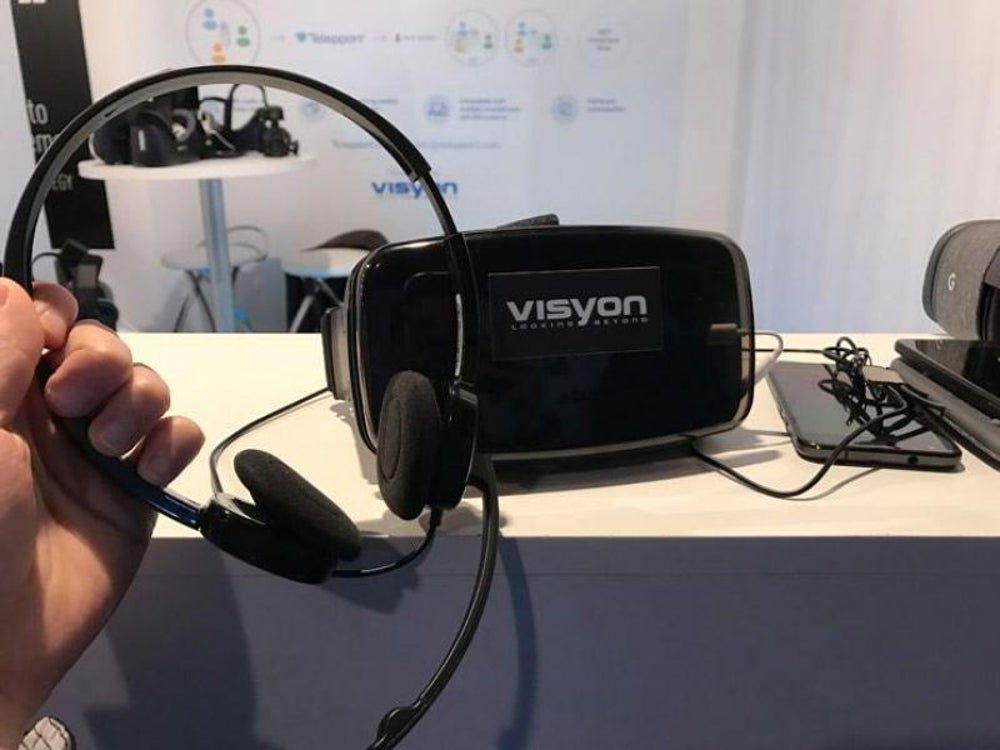 Telepport is a Spanish startup with a virtual reality streaming platform for businesses. Using proprietary technology called Visyon, the Barcelona-based startup powers two-way video conferences through virtual reality with an Android or iOS app or through supported VR headsets including Google Daydream View and Samsung Gear VR. The presenter on the other end has a Ricoh Theta S 360 camera to send 360-degree video to the VR participant on the other end. 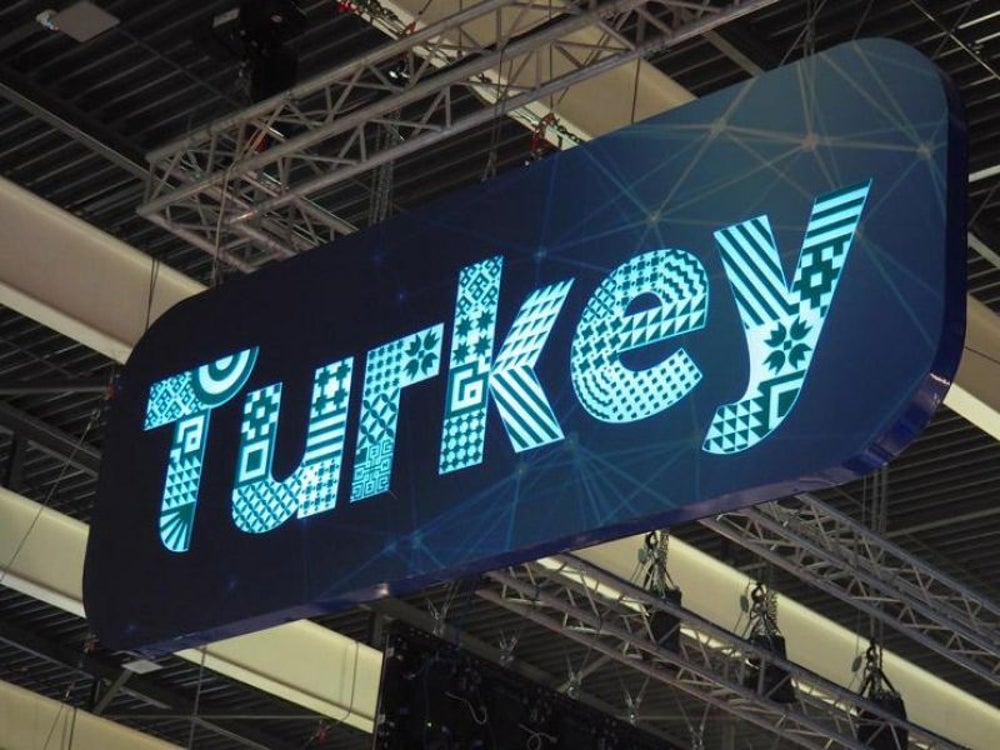 This Istanbul-based startup offers mobile and location-based technology in vehicle tracking and navigation, and enterprise mobility applications for companies in Turkey, Jordan, Azerbaijan and Georgia. The company partners with Oracle, Ericsson and TomTom in the region on location-based services (LBS) for GSM (global system for mobile communication) providers in those countries. 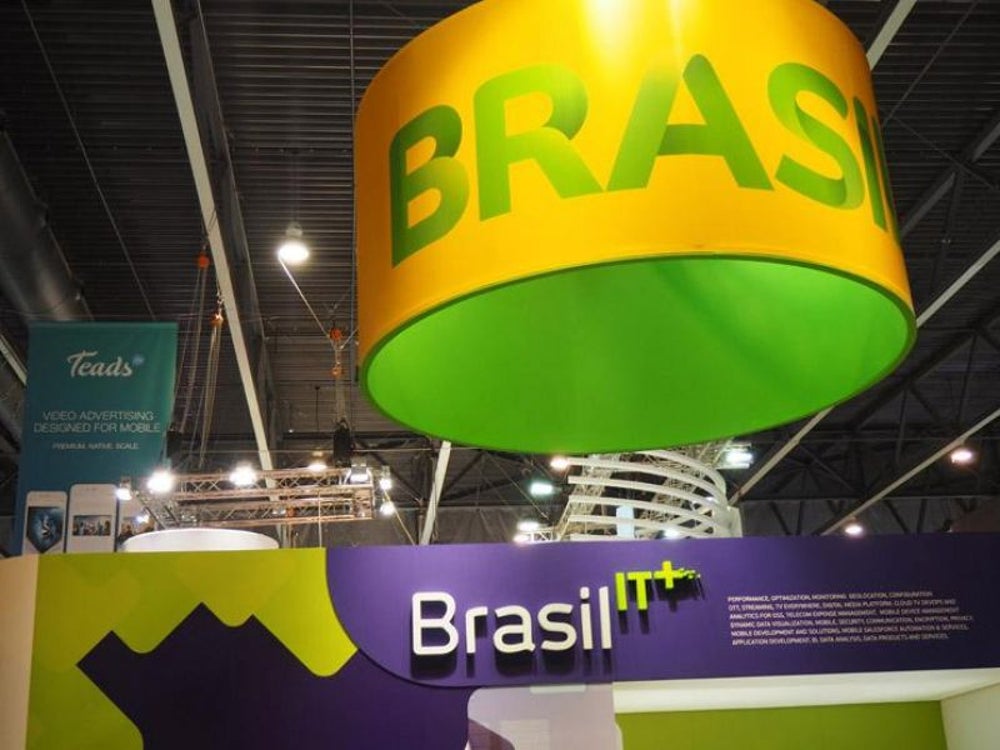 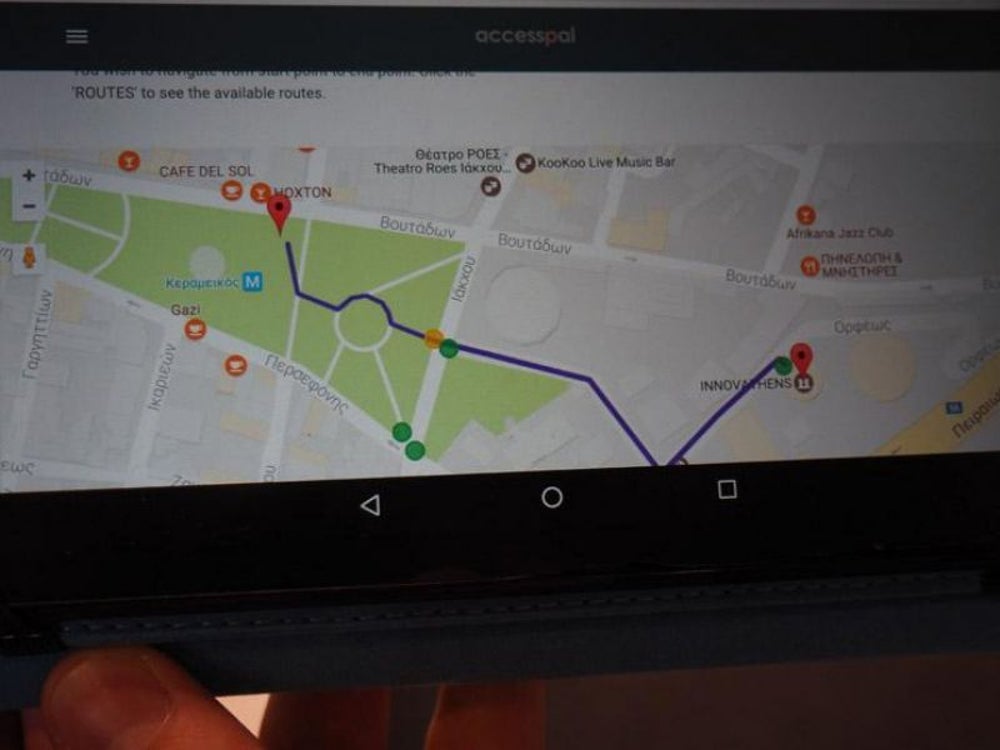 Travis the Translator (The Netherlands) 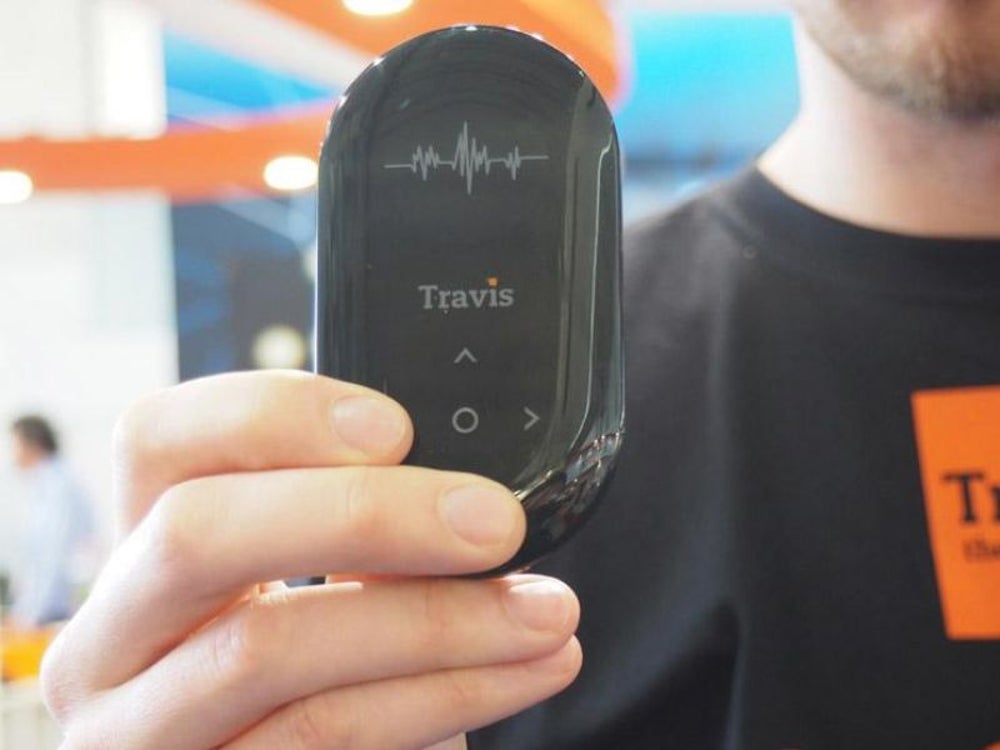 Travis the Translator is an Amsterdam-based startup that can translate up to 80 different language in seconds. Using the handheld pocket translator device, a user records speech, chooses an output language and the device spits out the audio translation. The natural language processing (NLP) platform underneath uses a host of translation engines including Systran and Google Translate to help anyone talk to anyone, anywhere in the world.
More from Entrepreneur

What to Expect at Mobile World Congress (MWC) 2017