21 Ways to Step Up Your Snapchat Game

These 21 tips make Snapchat superstardom a snap.
Next Article


Everything Snapchat does, Instagram -- and others -- have copied. Selfie filters can be found in Facebook and Instagram. Facebook Direct lets the company's huge user base send each other disappearing photos and videos a la Snapchat Snaps. And Instagram Stories have taken the place of, well, Snapchat.

It's enough that model Miranda Kerr, wife of Snapchat founder and CEO Evan Spiegel, spoke out about it. "Do they have to steal all of my partner's ideas?" she said of Facebook. (Though she still uses Instagram.)

If you're still a loyal Snapchat user, we have some tips. The selfie-friendly service is adding new features all the time, so scroll through them below 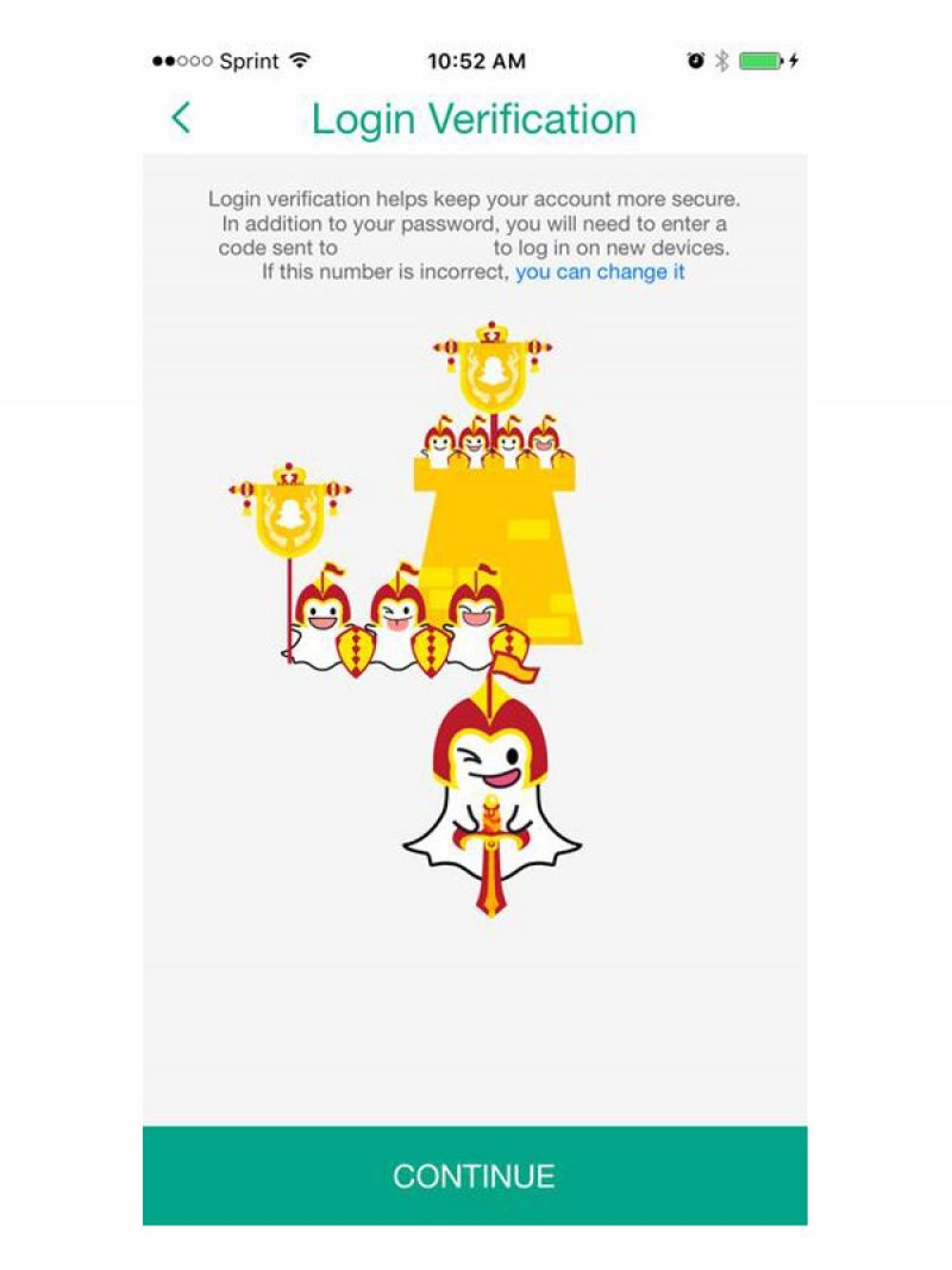 Don't let someone hijack your snaps. Snapchat has two-factor authentication. Once enabled, you'll need your password and an SMS code sent to your phone to log in to your Snapchat account on a new device. To enable it, tap the Snapchat icon > the gear icon on the top right > Login Verification > Continue, and a verification code will be sent to your phone. 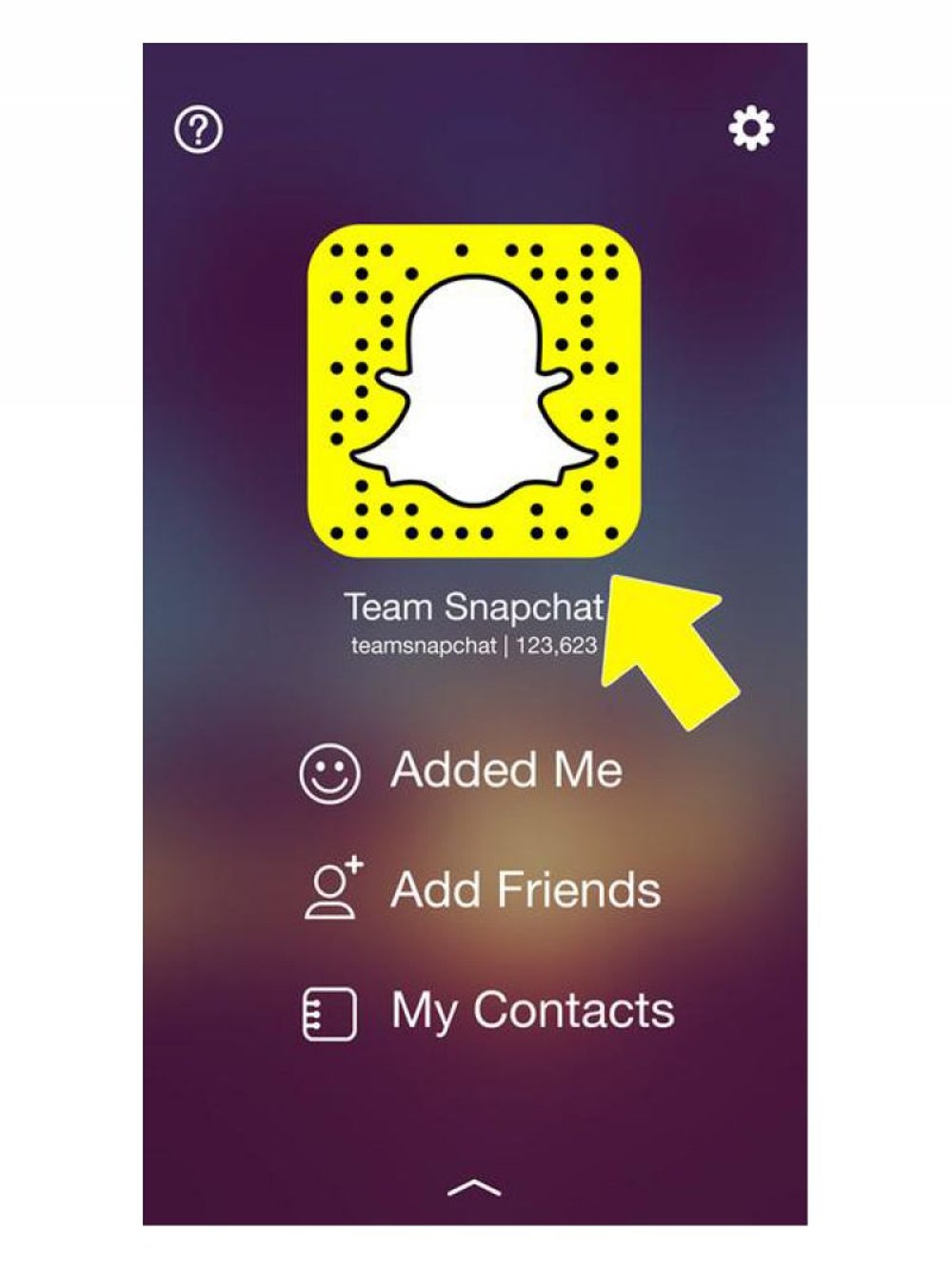 Finding friends in Snapchat can be hard, and not because you're not popular. Snapchat can access your contacts and add them but beyond that, search is really limited. If you don't know someone's exact Snapchat name, the easiest way to add a new friend is to use Snapcodes. Snapchat assigns every Snapchatter a unique, scannable Snapcode. To add someone via Snapcode, open Snapchat, aim the camera at the Snapcode, tap and hold on the Snapcode on your screen, and then select the option to add when it comes up. 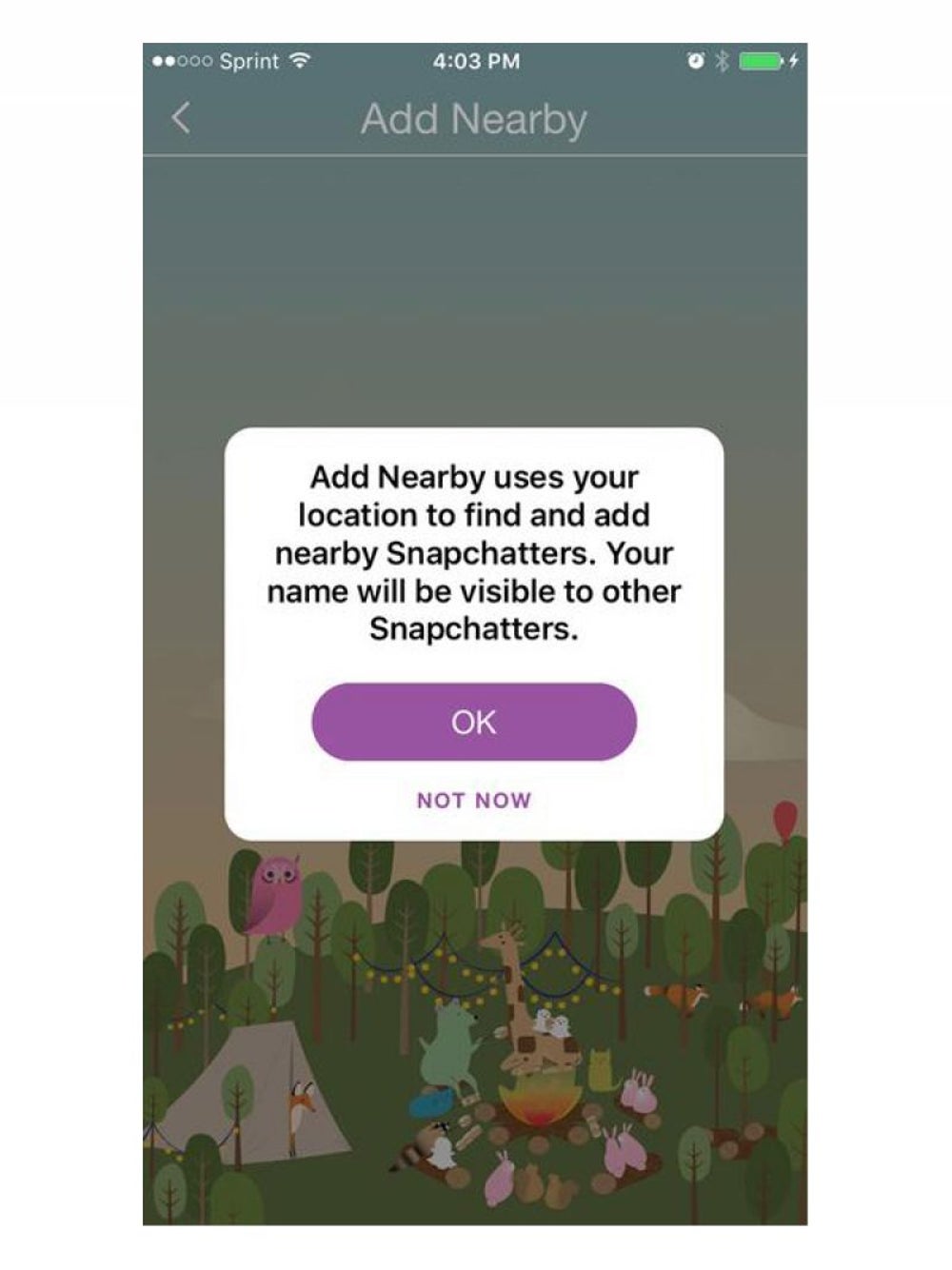 You can also find a new friend right near you with the Add Nearby feature. Tap the Snapchat icon > Add Friends > Nearby. If you have location services turned on, you'll be shown all nearby Snapchatters. 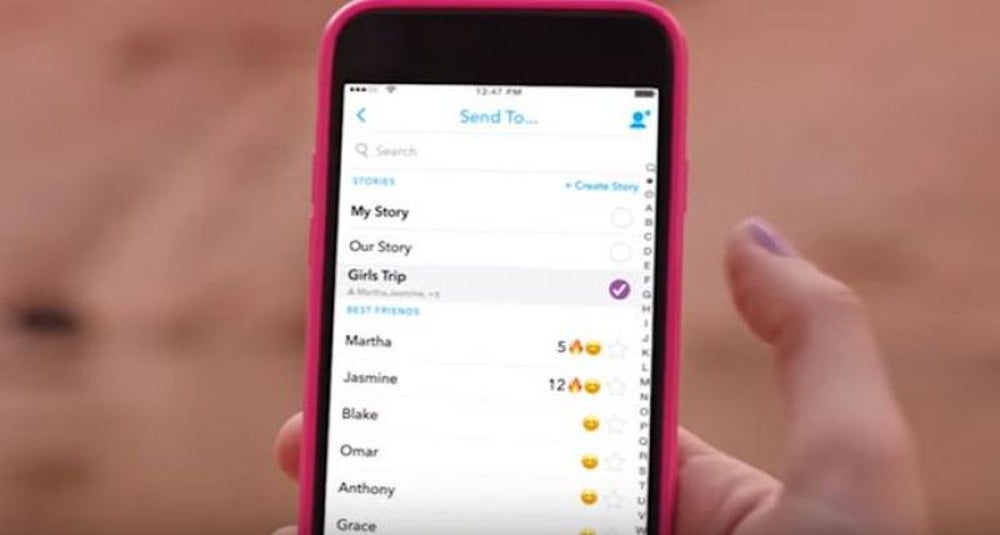 Storytelling can bring an entire group together. To that end, you can invite people to contribute to a Snapchat Story. You decide who can add to the Story and who can view it -- you can also choose to Geofence the Story to a location. From the Stories page, select the plus sign icon on the top right and you can choose who can contribute to a Story. The story will disappear 24 hours from its last update. 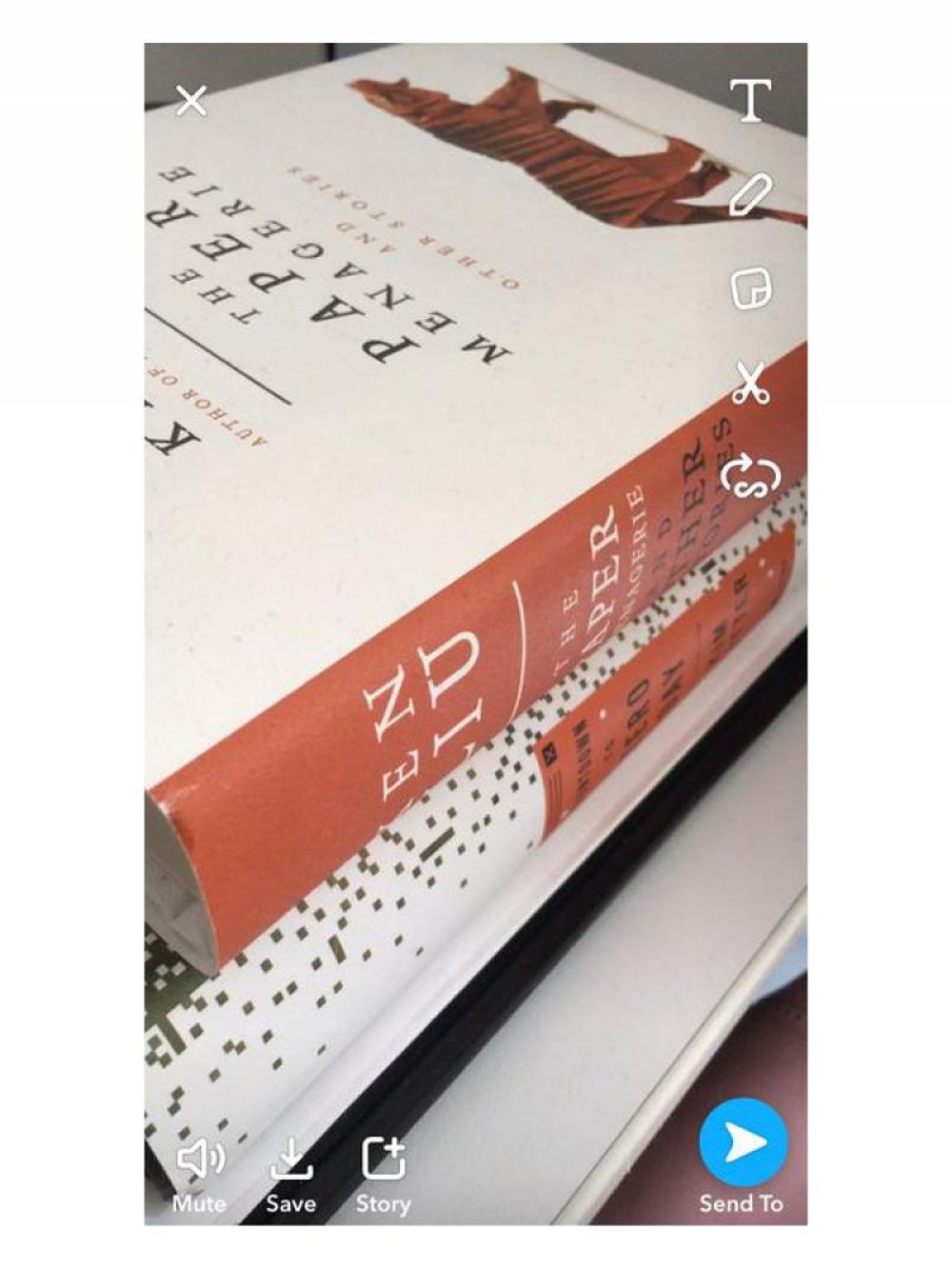 There's something mesmerizing about looped videos. To make one in Snapchat, take a video as you normally would and then tap the loop symbol that surrounds the number 1 on the right side of the screen. It will now turn to an infinity symbol, meaning that when you send the video, it will loop continuously until the viewer goes on to the next Snap. 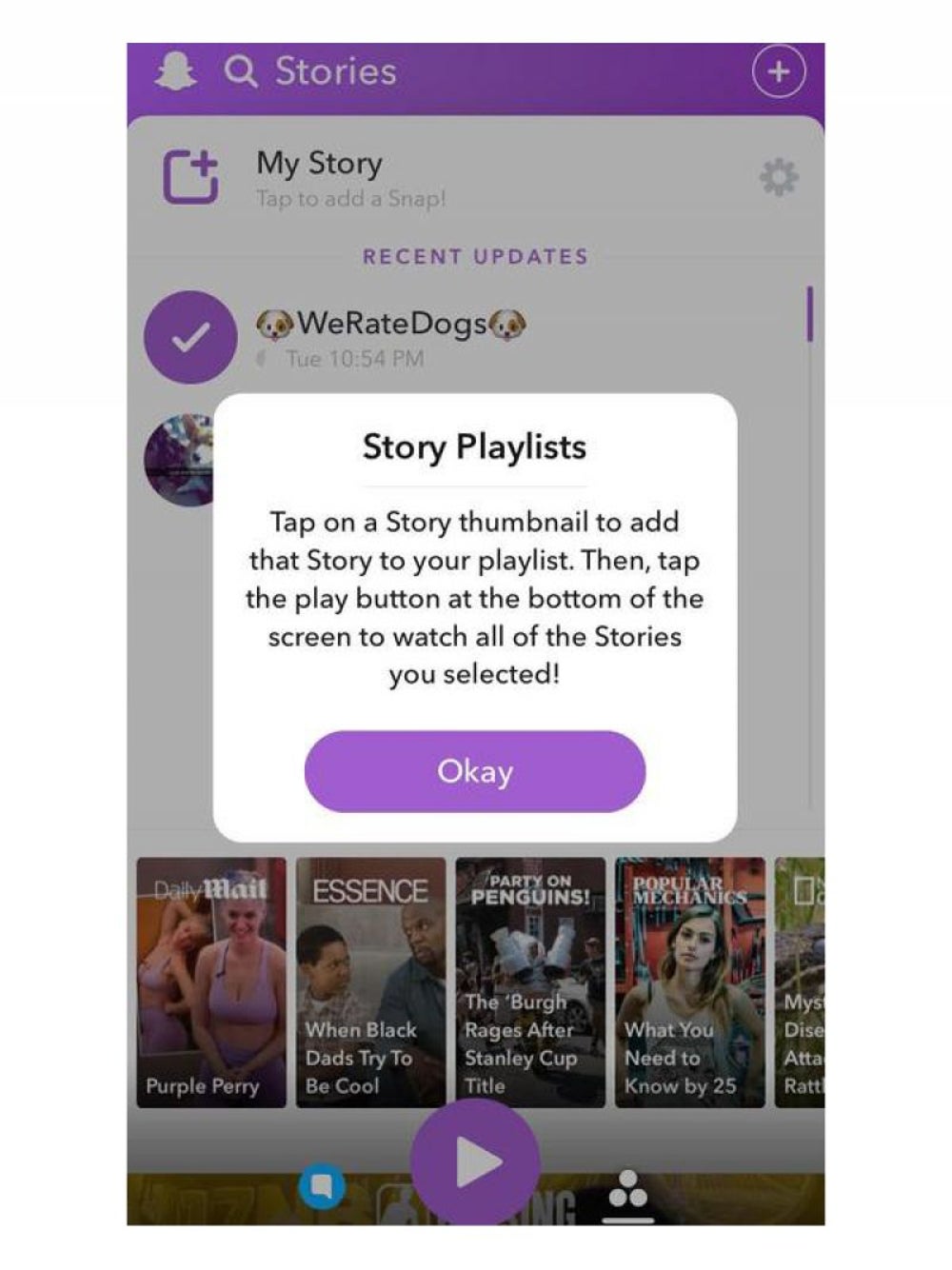 Snapchat's Auto Advance feature -- which put users through a parade of one video after another -- is done. In its place is Story Playlist.

Now you can choose the stories you wish to watch. Tap on the Story icon to the left of a friend whose videos you want to see, and a purple check mark will appear. Do the same for all friends whose Stories you want to play automatically. Now when you tap the purple play button at the bottom of the Snapchat home screen you'll see only your select playlist. 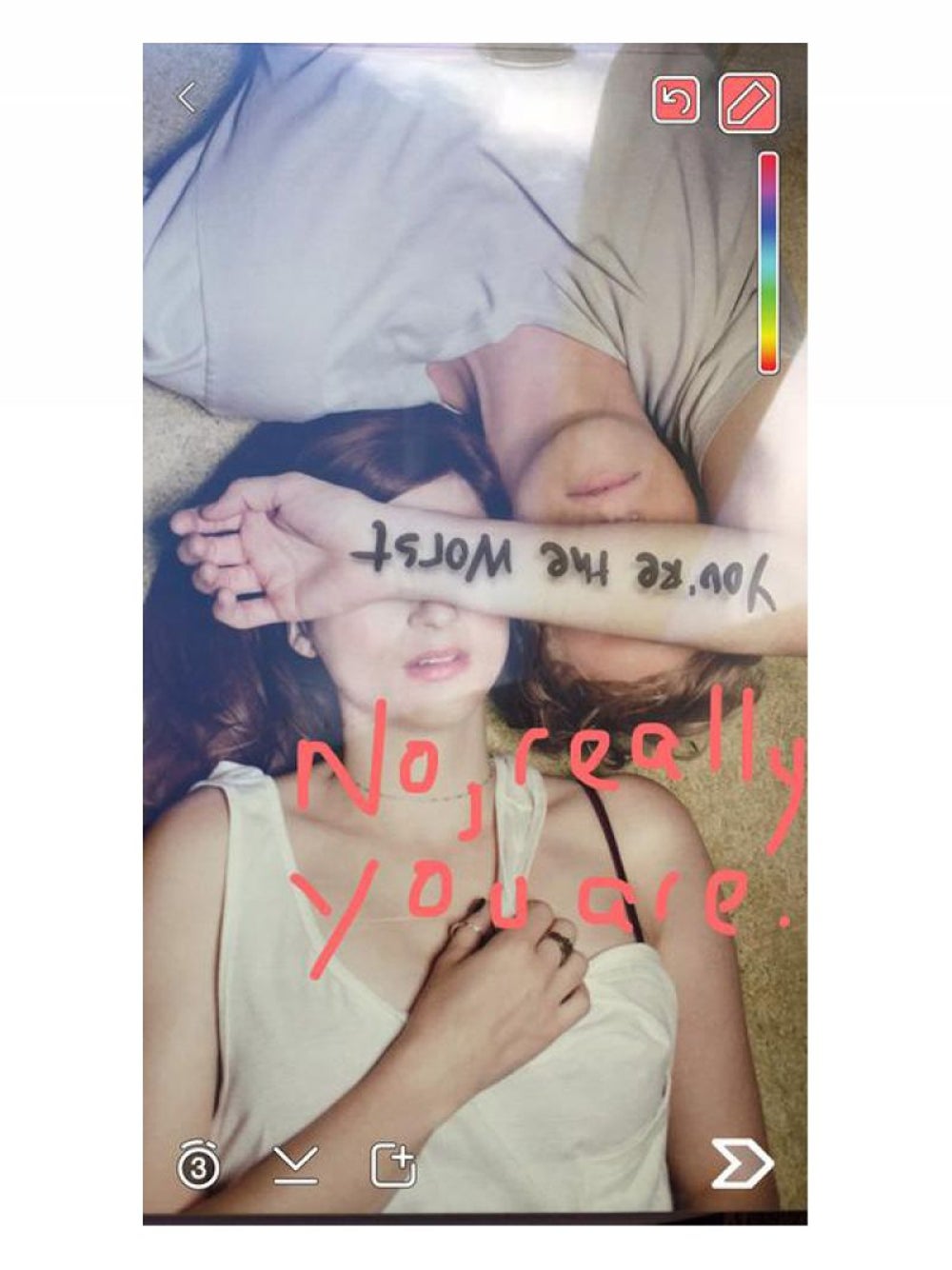 If you like to draw on your snaps with the Pencil icon, you're not limited to the palette that shows up. To get superchromatic, tap the color bar. Then drag your finger up the screen to get lighter colors and down for darker ones. When the pencil icon is the color you'd like to use, lift your finger, tap where you'd like to draw, and you'll see your color selection. 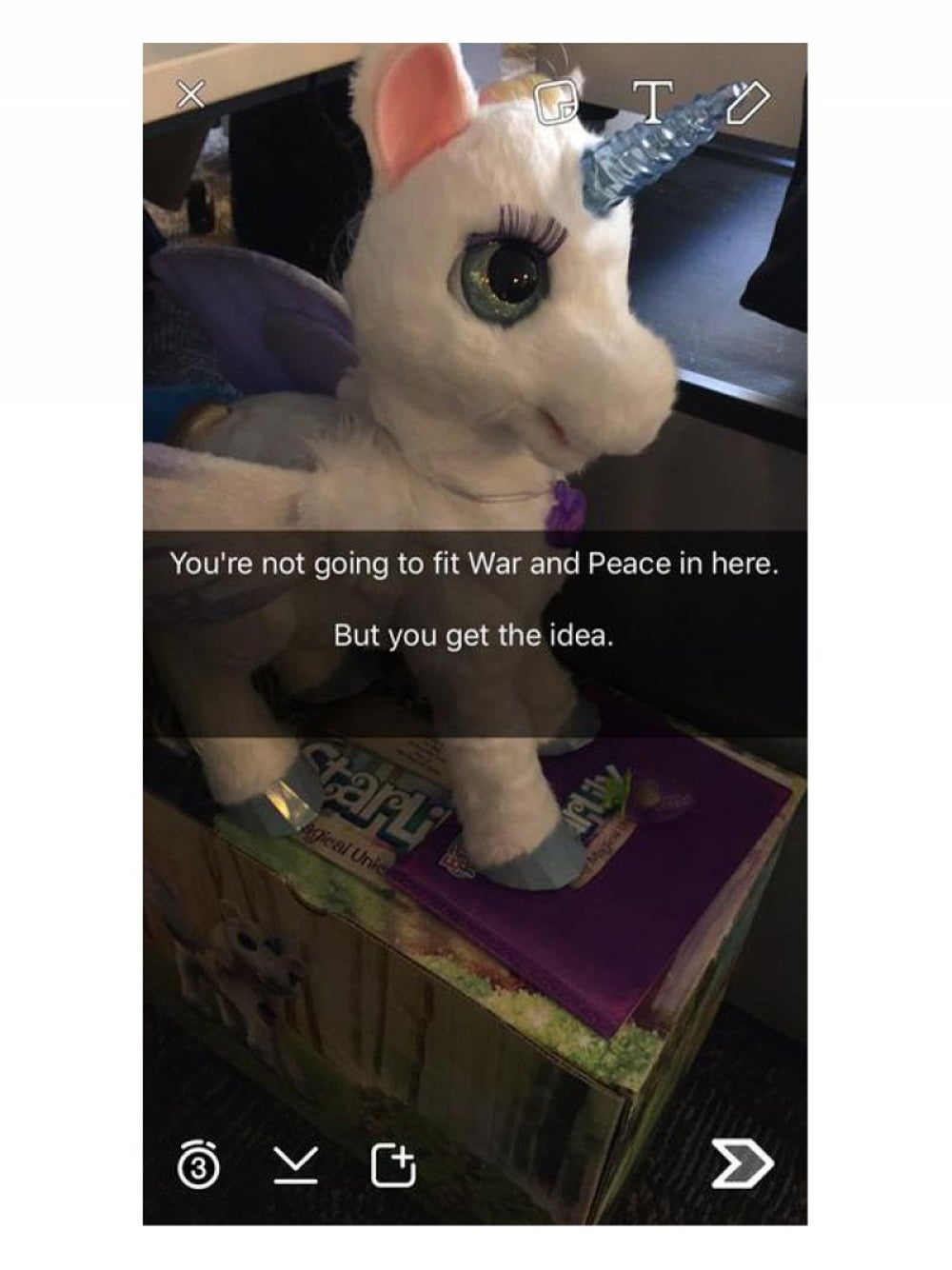 Snapchat is low on characters, at least when it comes to writing captions. Thirty-one characters used to be the limit and though it's now been raised to 80, you probably have more to say. Open up a notepad-type app, hit return several times until you have a few lines, then select all and copy the whole document. Then go back into Snapchat and paste it. Now you can type far past Snapchat's limit in the box.

Take it on the road 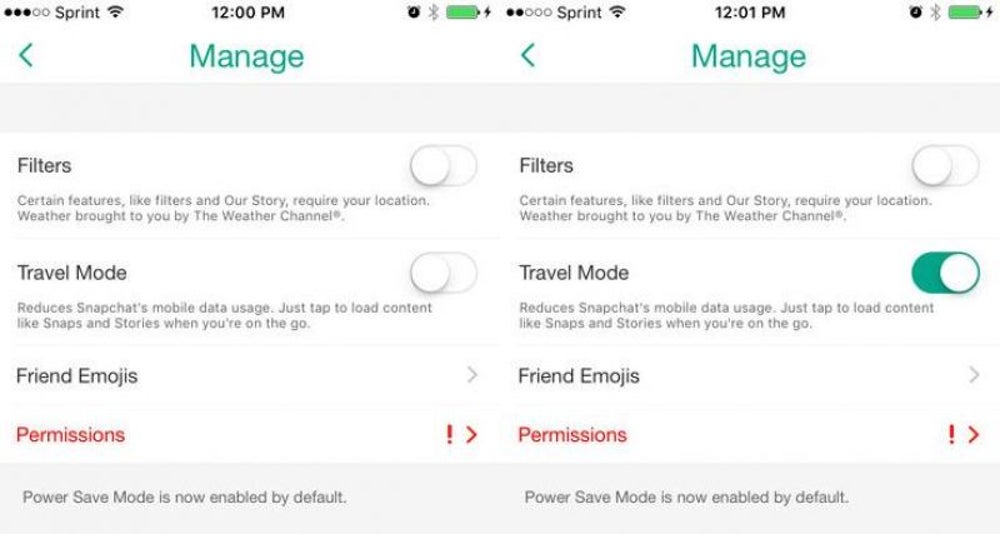 To save data, put Snapchat into Travel Mode to prevent content from loading in the background when you're on your carrier's network. Go to Settings > Additional Services > Manage, and you'll see Travel Mode. Toggle it on. 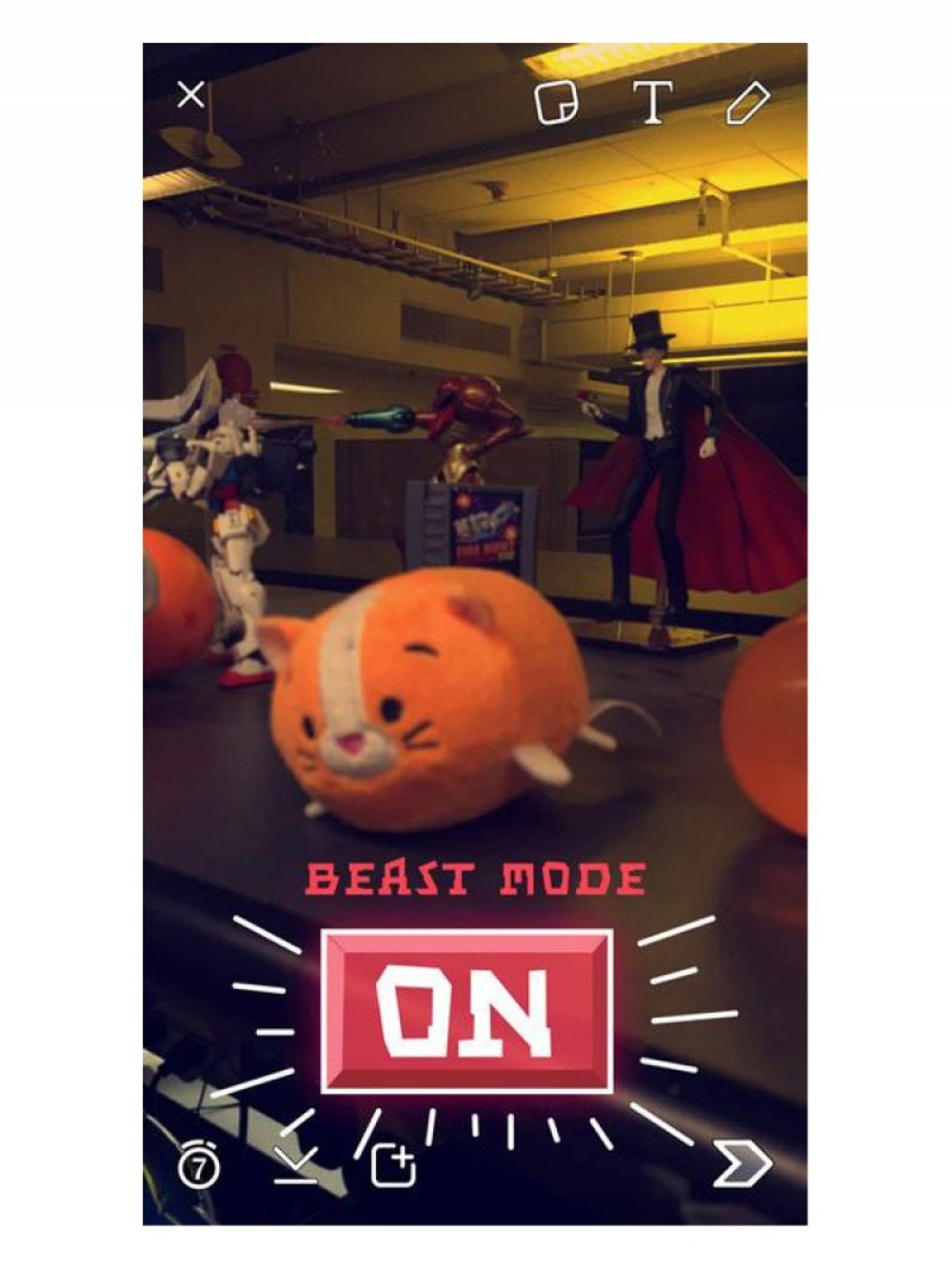 Life looks better through a filter. So imagine how much better your snaps will look if you filter them twice. To use two filters at once, take a snap, then swipe left across the screen to add the first color filter. Then press and hold on the screen to keep that filter in place, and use another finger to swipe again and you'll be presented with geolocation, weather, and other filters. Tap the arrow to send your ultra-filtered snap. 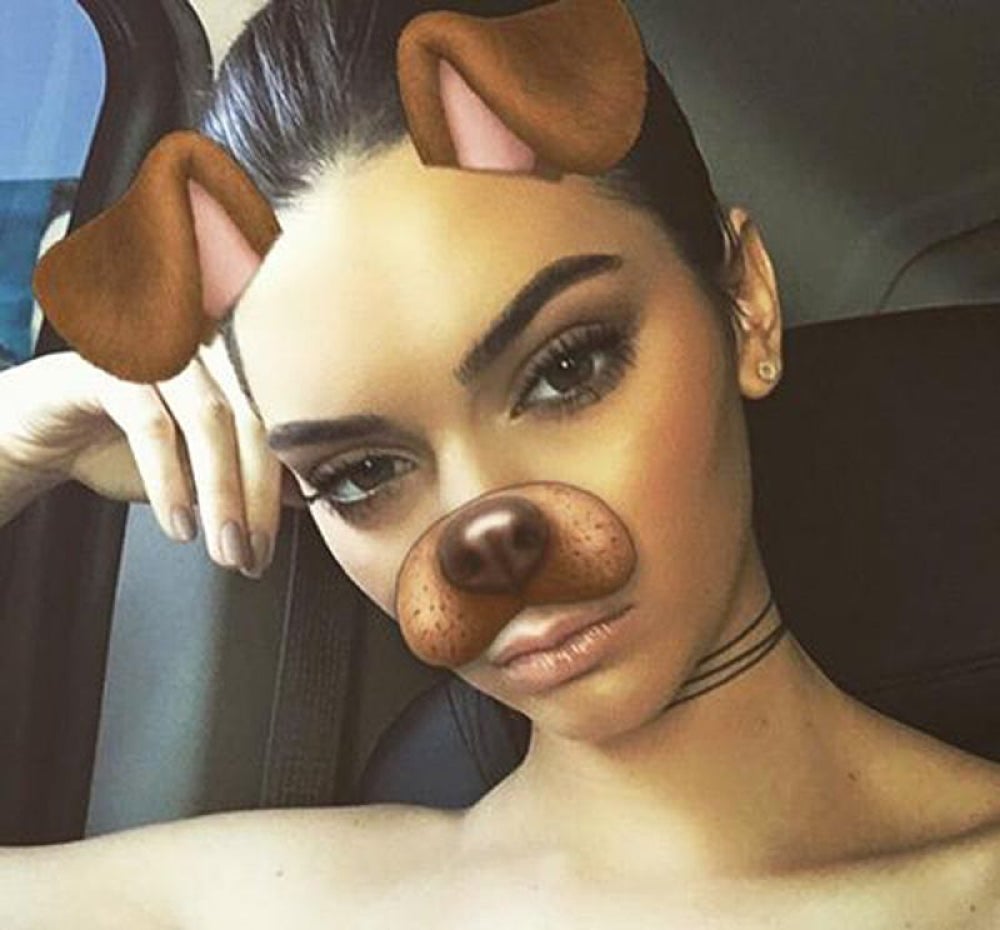 Puppy power! Everyone looks good with the dog lens. If you want to have your day, open Snapchat, make sure the front-facing camera is turned on you, and press down on the screen. A menu should appear at the bottom of the screen, which you can scroll through to find cute and sometimes disturbing lens options. Some will require you to open your mouth or raise your eyebrows to activate. Snapchat swaps out lenses regularly, though dog is truly your best friend and always available.

You can also make the world a more beautiful place. When you're using the rear camera, tap the screen and you'll get lots of lenses to apply to your view. 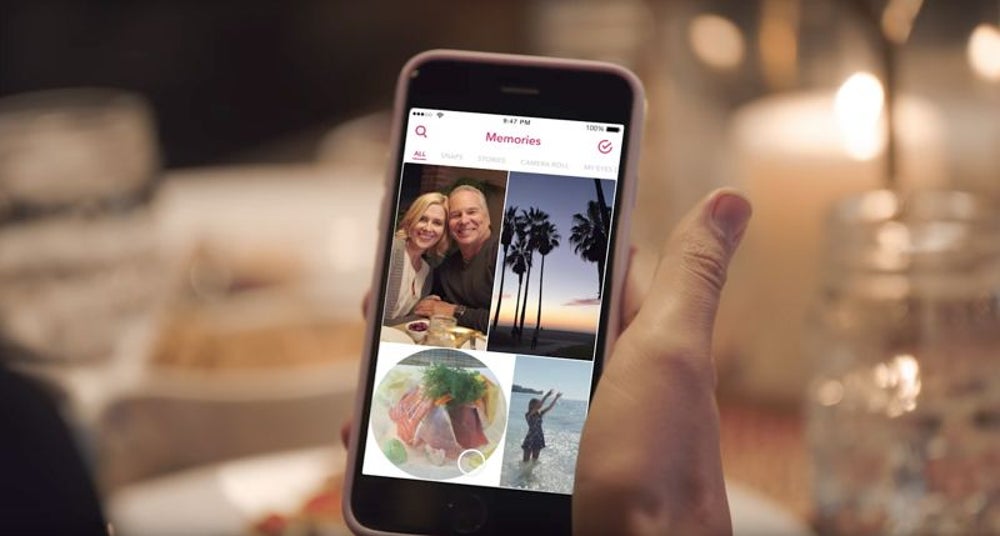 This Snapchat feature seems to go against all that Snapchat was founded on, but it's a sign that the service is all grown up. Memories is a way of holding onto Snaps and Stories. To create a Memory, save as you normally would. Instead of being saved to your camera roll, the Snap or Story will now be saved to Memories. To see all your Memories, swipe up from the camera screen. If you don't want to keep Memories around, then go to Settings > Memories > Saving > Save To and select Camera Roll Only. 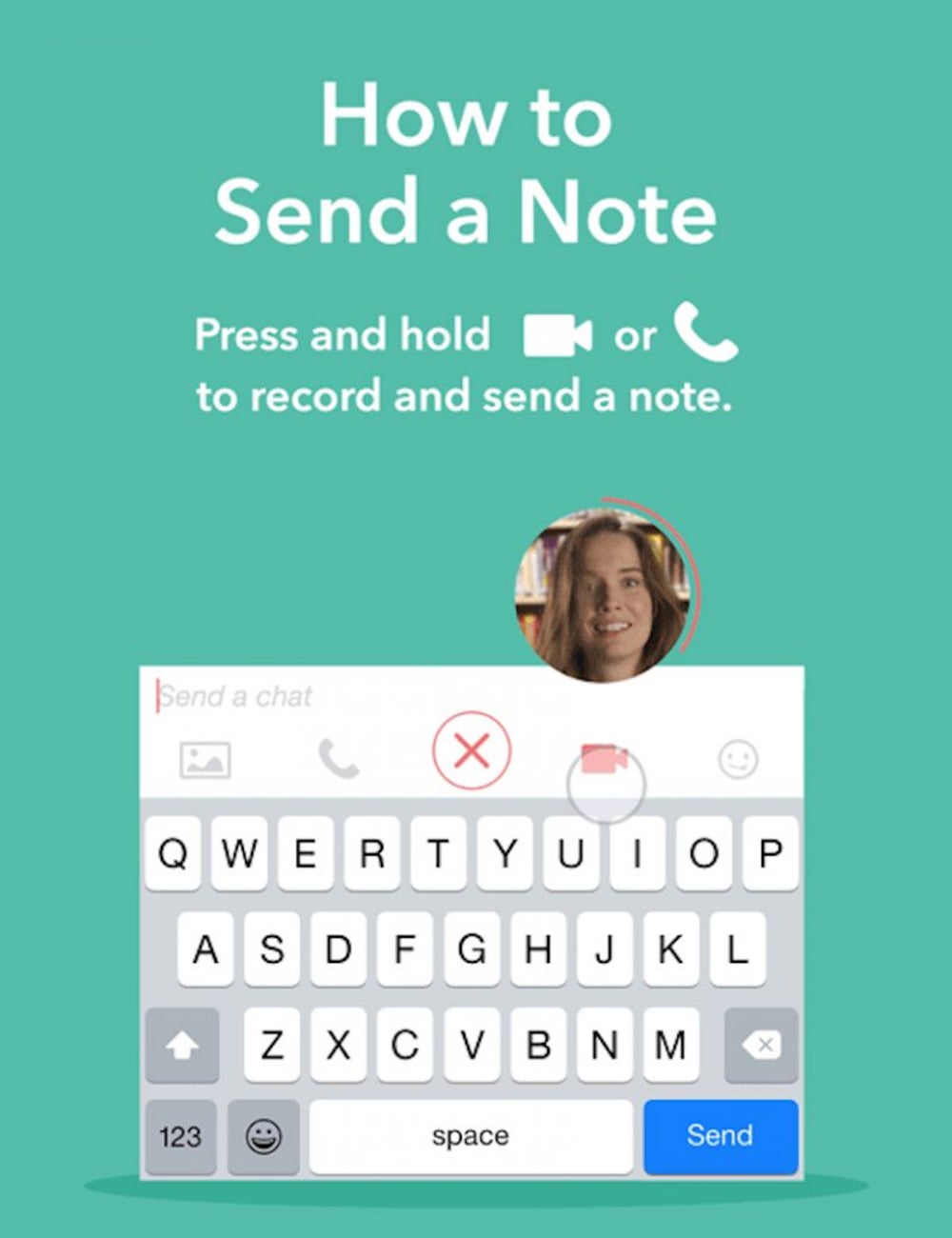 Snapchat is really putting the chat in your Snaps. In features called Chat 2.0, Snapchat introduced audio and video communication. Once you've initiated a chat with a friend, you can tap on the phone or video camera icon to communicate. For video, your friend can tap Watch and you won't be able to see them but they can hear you, see you, and also send you chats. Or your friend can choose Join and you can see and hear each other. For audio, Listen and Join work much the same way. Your friend can tap Listen to hear you and Join if they want to chat with you. If you're holding your phone away from your face when you chat, you'll be on speakerphone. If you move it near your ear, the call will be transmitted through the earpiece. 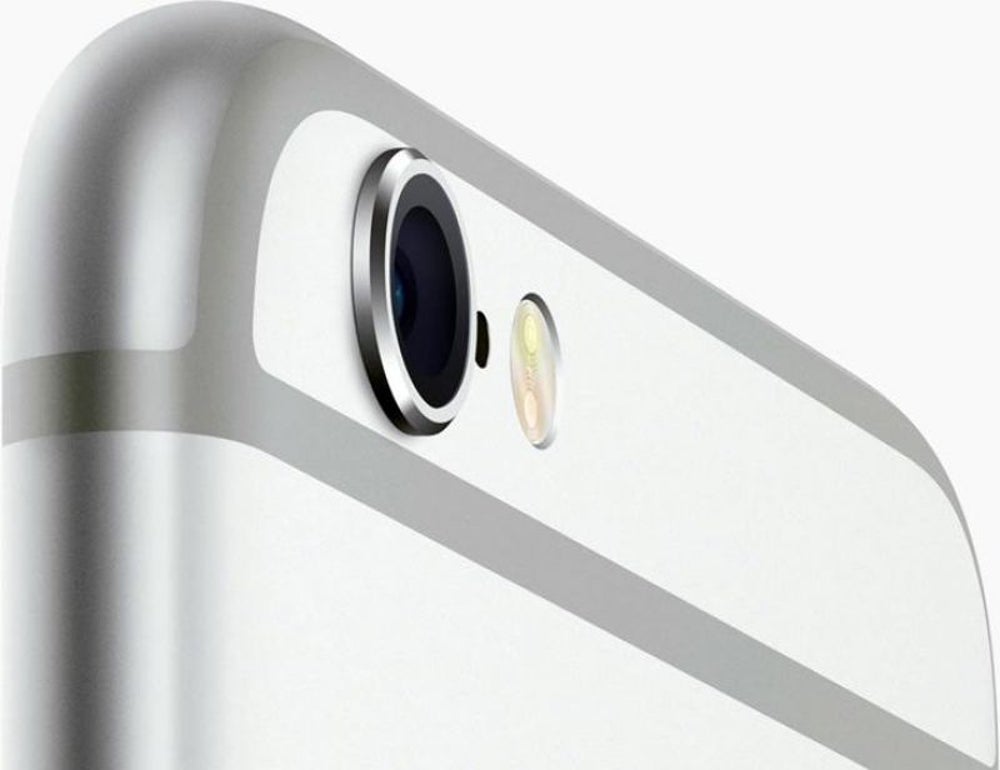 You don't have to choose sides when you're Snapchatting. To switch between the front and rear cameras, double tap the screen while recording. 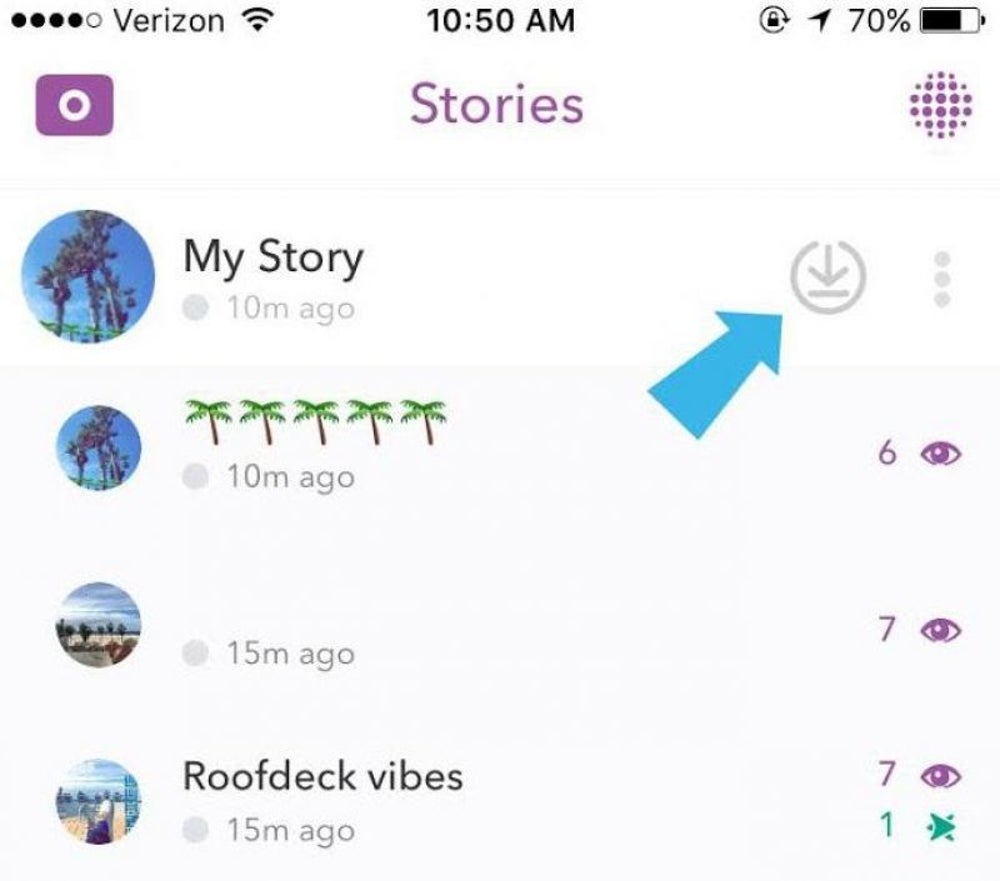 Want to know who's been creeping on you? Go to My Story, tap on the three stacked dots, then the Snap in question, and then swipe up to see who's viewed or screenshotted it. Swipe down when you're done. 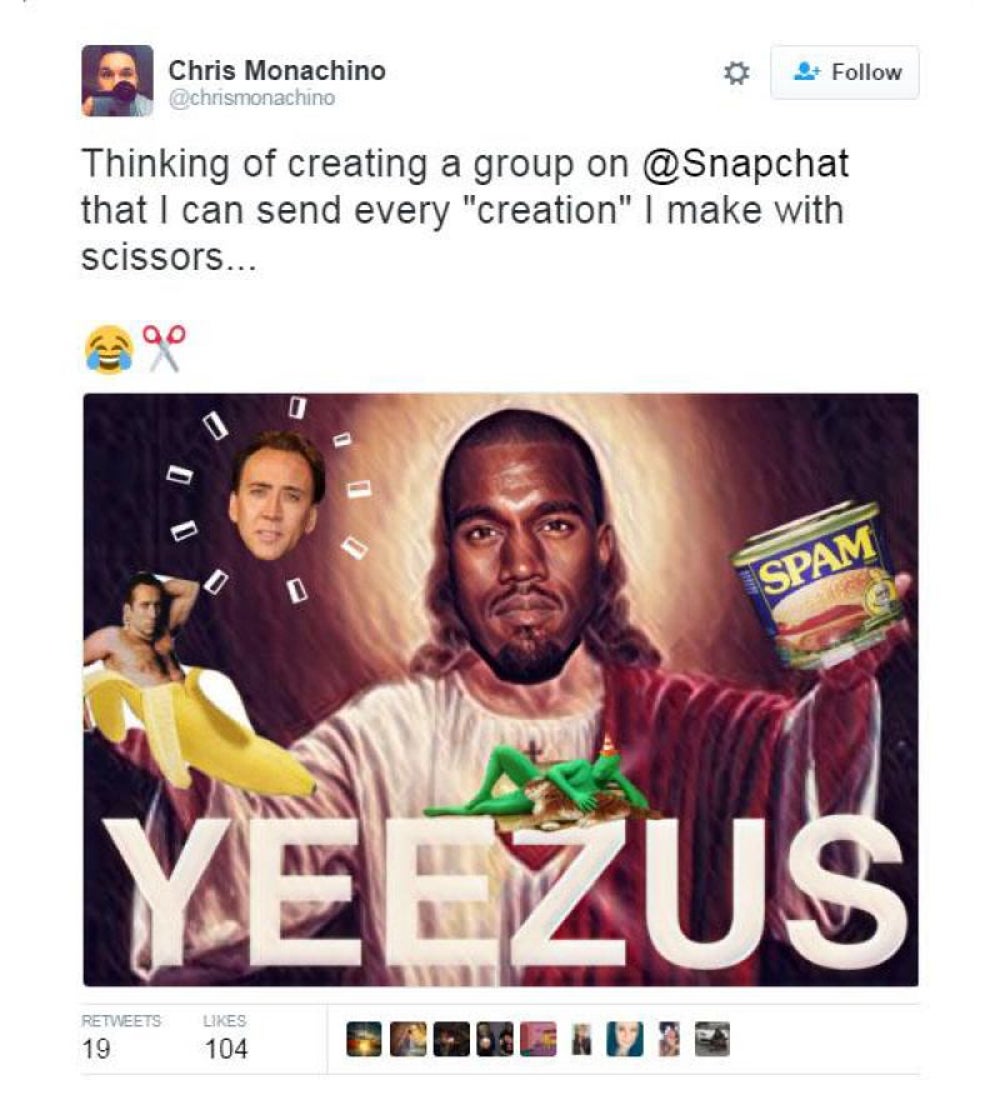 If you've made what you thought was the perfect snap and thought it should be preserved (almost) forever as a sticker, the Scissors feature can do just that. After you've taken a snap, a scissor icon will appear in the upper left of the preview screen. Tap the icon and then draw around the area on the screen that you want to turn into a sticker. When you lift your finger, the object will now be saved as a sticker. 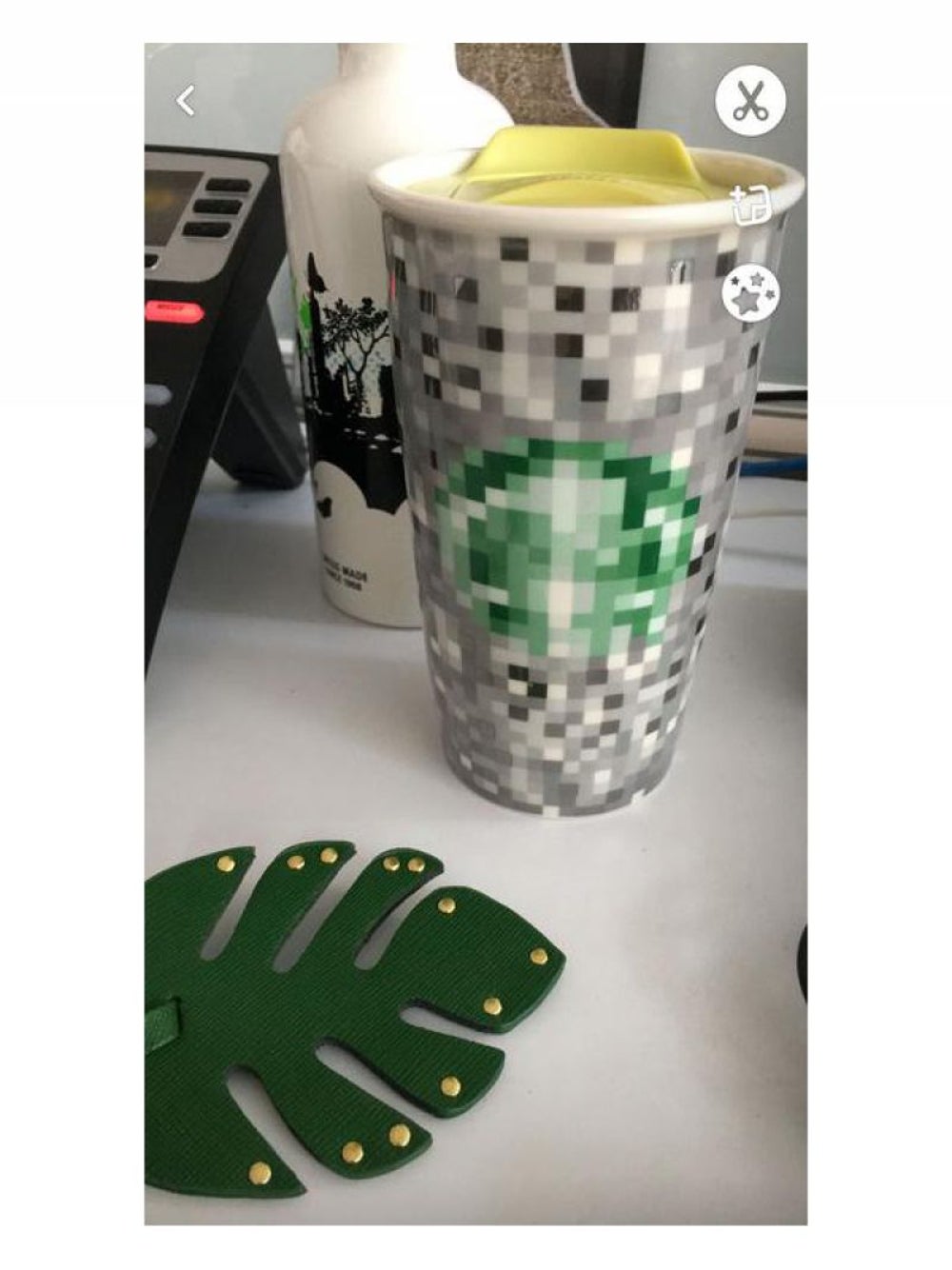 If your Snap is perfect except for just that one thing you wish you could get rid of, don't worry. You can use the Magic Eraser to take it out. Take a photo, then tap the scissor icon and a trio of stars will appear. Select the stars and then use your finger to color in whatever you want gone. When you lift your finger, a flurry of stars will appear briefly and then the object will be gone. 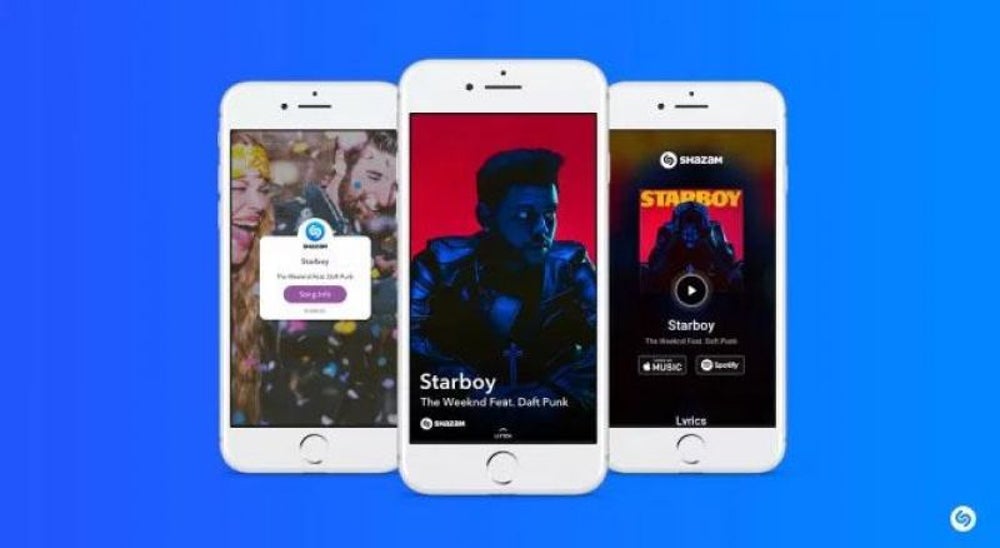 Snapchat has Shazam integration. While the camera is open in Snapchat, you can press and hold the screen and Shazam will identify any music playing in the vicinity. The result will appear in a pop-up box that also lets users share the song. 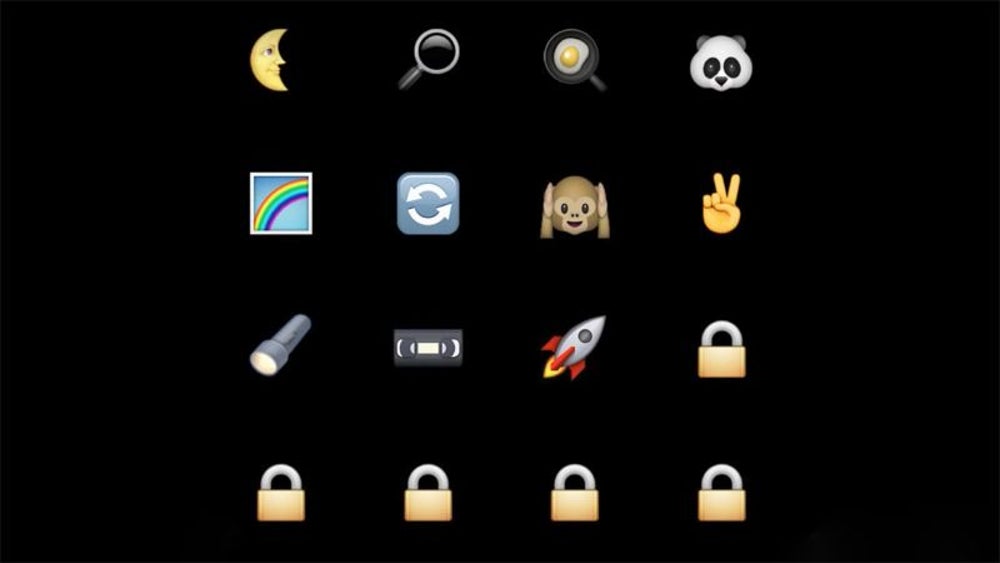 Think your Snapchats are worthy of a trophy? So does Snapchat. If you snap something, you could get something. A tiny emoji trophy in your Snapchat Trophy Case, that is. To see what you've racked up, tap the Snapchat icon on the photo screen, then the trophy that appears at the top of the page. While there's no public list of trophies, one person is doing their best to document every trophy and its meaning. 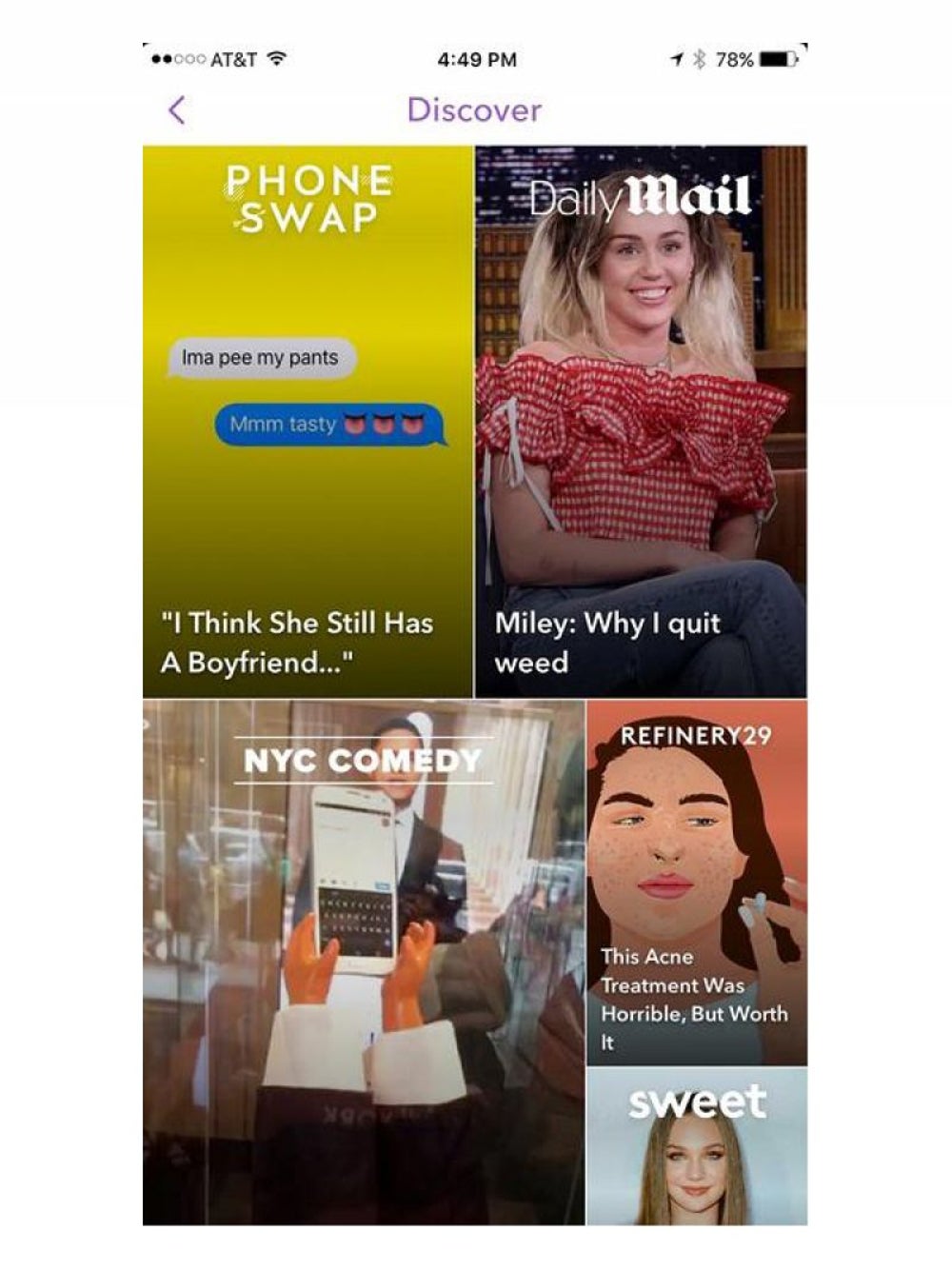 Snapchat's not going to make big bucks on your selfies alone. And that's where media partners like National Geographic, People magazine, Comedy Central, The Food Network, and ESPN come in. In 2015, Snapchat launched Discover, which is essentially bite-sized versions of those companies' content that can be consumed in swipes and taps. Swipe left to explore.

Make a Spectacles of Yourself

Spectacles are great unless you wear prescription glasses. But GlassesUSA.com is now offering prescription lenses that pop into the Spectacles frame for $29.
More from Entrepreneur

Snapchat Set Up Million-Dollar Pot to Entice Users in Mexico