The Business of Couplepreneurs: Five Couples Share the Highs and Lows of Running a Business Together

Read on to know how these couplepreneurs counterpoise the act of love and business.
Next Article

From Fashion to sports, to food you will find them everywhere in the world of business.

(This article appears in the March-April 2019 issue of Entrepreneur Magazine. To subscribe, click here. You can buy our tablet version from Magzter.com. To visit our Archives, click here.) 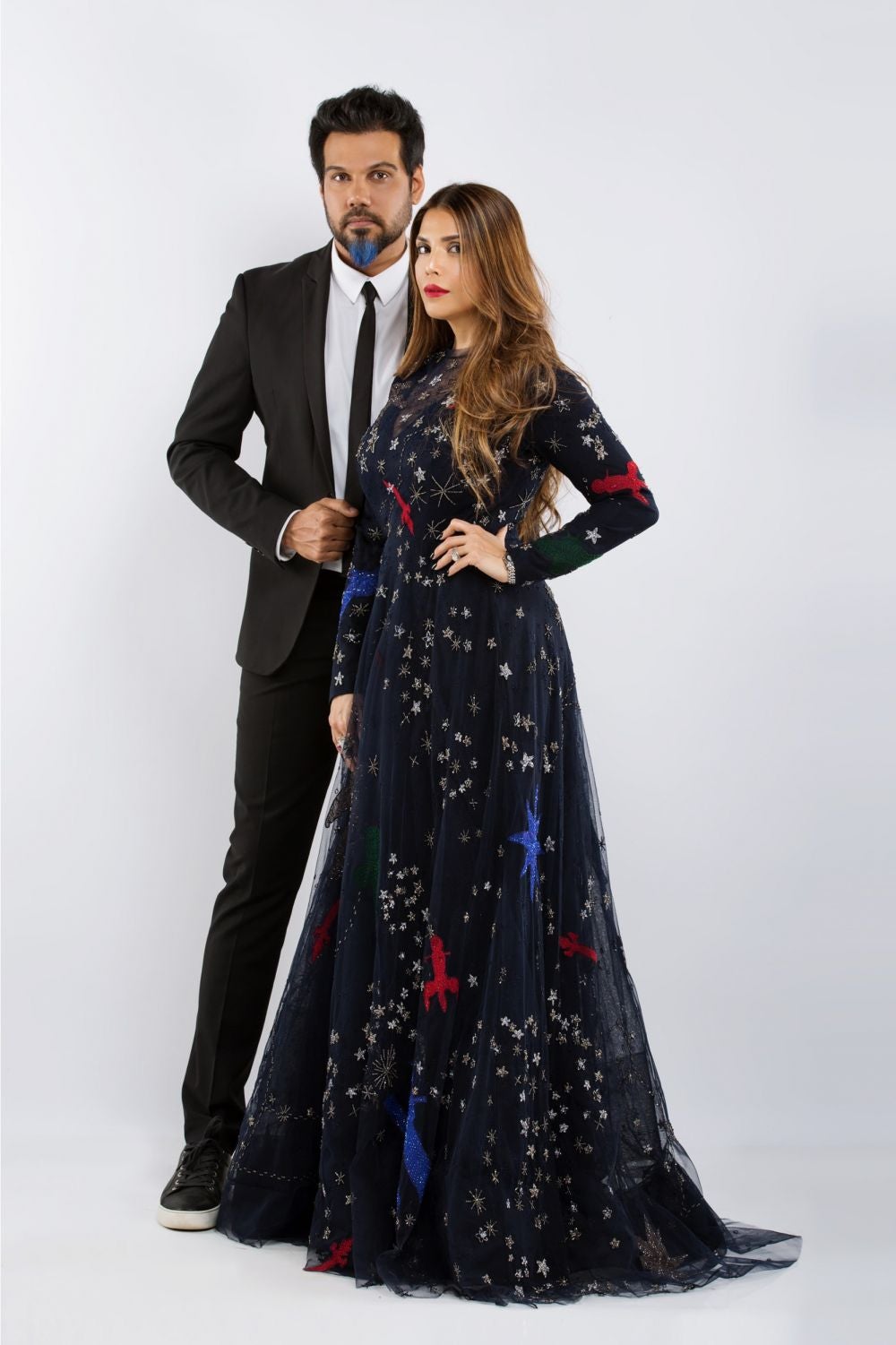 Designers Falguni and Shane Peacock had a flair for fashion since an early age. For being life long associated with their interest, the duo pursued education in fashion, and went on to work in the industry to gain some experience before launching their own fashion label, Falguni Shane Peacock in 2004. Describing their design as avante-garde and edgy, the husband-wife duo say, “We like experimenting with opulent elements of surface ornamentation, incorporating them in an unconventional way into our designs. The silhouettes we create are modern and contemporary with a juxtaposition of our signature components like sequin, feather, prints and other embellishments.” The designer couple is credited for having brought international recognition to the domestic fashion sphere. International celebrities like Beyonce and

Lady Gaga have worn their couture. Further, the duo has showcased their collection in the international fashion weeks like the New York and the London Fashion Week.

On reflecting back on their journey spanning more than a decade-and-a-half, both Falguni and Shane feel overwhelmed. They say, “The reach and impact of our label over the last decade has been overwhelmingly impressive.

Our clientele isn’t constrained within the country; we dress brides from all over the world.” Citing team spirit as one of their reasons for success, the duo says, “Over the years, we have embraced every professional conflict with a level-headed discussion, where we weigh in practical solutions and then come to a conclusion unanimously.”

For the year 2019, the couple is upbeat and promises to come out with a lot of new collections, from bridal couture to cocktail ensembles to prêt and menswear lines. 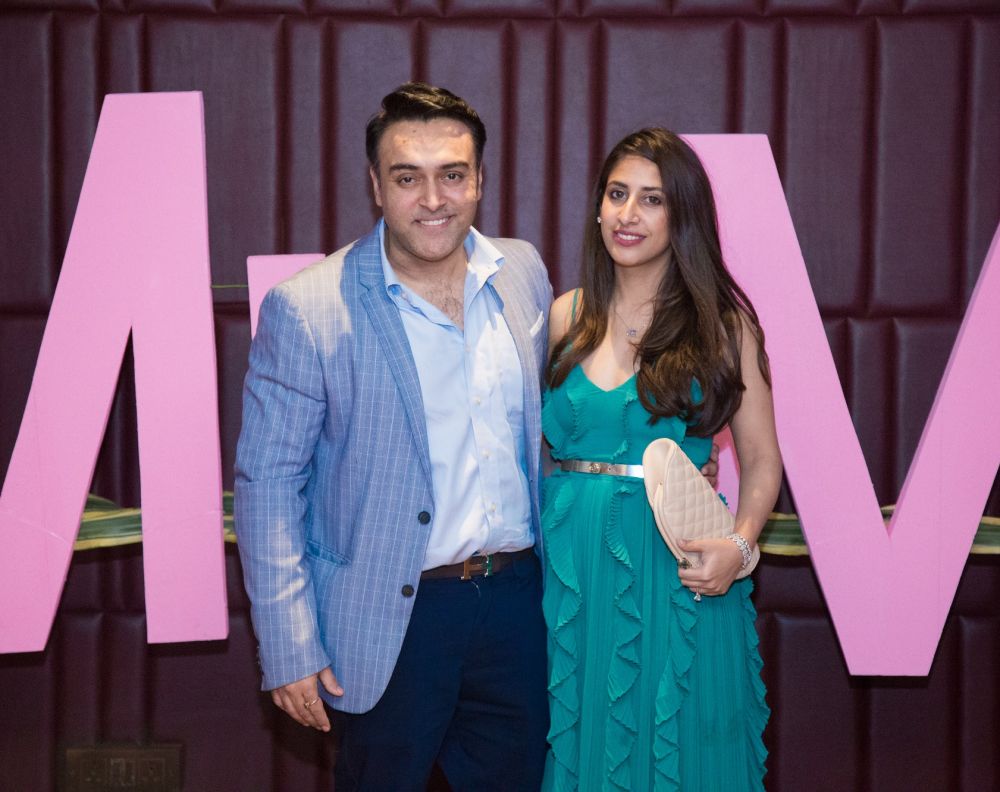 The Indian palate is already stuffed with a plethora of dishes but how Delhi born Zorawar Kalra reinvented the culinary ingredients is truly amazing. It came natural to Zorawar as he was raised in a family that was immersed in the food industry. His father Jiggs Kalra is the pioneering food columnist, author, gastronome and food consultant often referred to as the ‘Tastemaker to the Nation.’ And thus, he came to be known as the Prince of Indian Cuisine.

But his counterpart, Dildeep Kalra, with whom he tied the knot in July 2007, also got the hang of gluttony as she metaphorically iterates that their bond is like a perfect combination of wine and cheese. Massive Restaurants is a company, which owns and operates restaurants like KODE, Masala Library, Pa Pa Ya, Farzi Café and Made, in Punjab, that Zorawar and Dildeep have strived together to build. It was their first venture together which they established in 2012. It is a combined effort with parallel and similar responsibilities. “I was in Delhi to meet my friends and I went to Aqua at the Park Hotel where I happened to meet him at that party,” says Dildeep. They started dating in December 2005.

The couple has plans to take the venture global after raising its second round of funding, amounting to roughly Rs 160 crore. “We are now expanding internationally and our vision and mission is to take Indian cuisine global,” she denotes. The couple loves to travel and try cuisines and explore eating joints despite having contrasting personalities. But over the years, they adapted to each other’s ways. They are mostly on-the-go handling different aspects of the business. “This involves a lot of international and domestic travel. It is difficult but we ensure we spend quality time with kids,” she says. Raising kids is a combined role. “Zorawar does his bit and I do mine. Homework and extracurricular activities are something Dildeep looks into. Having said the same, he never misses any important event at school,” she says. 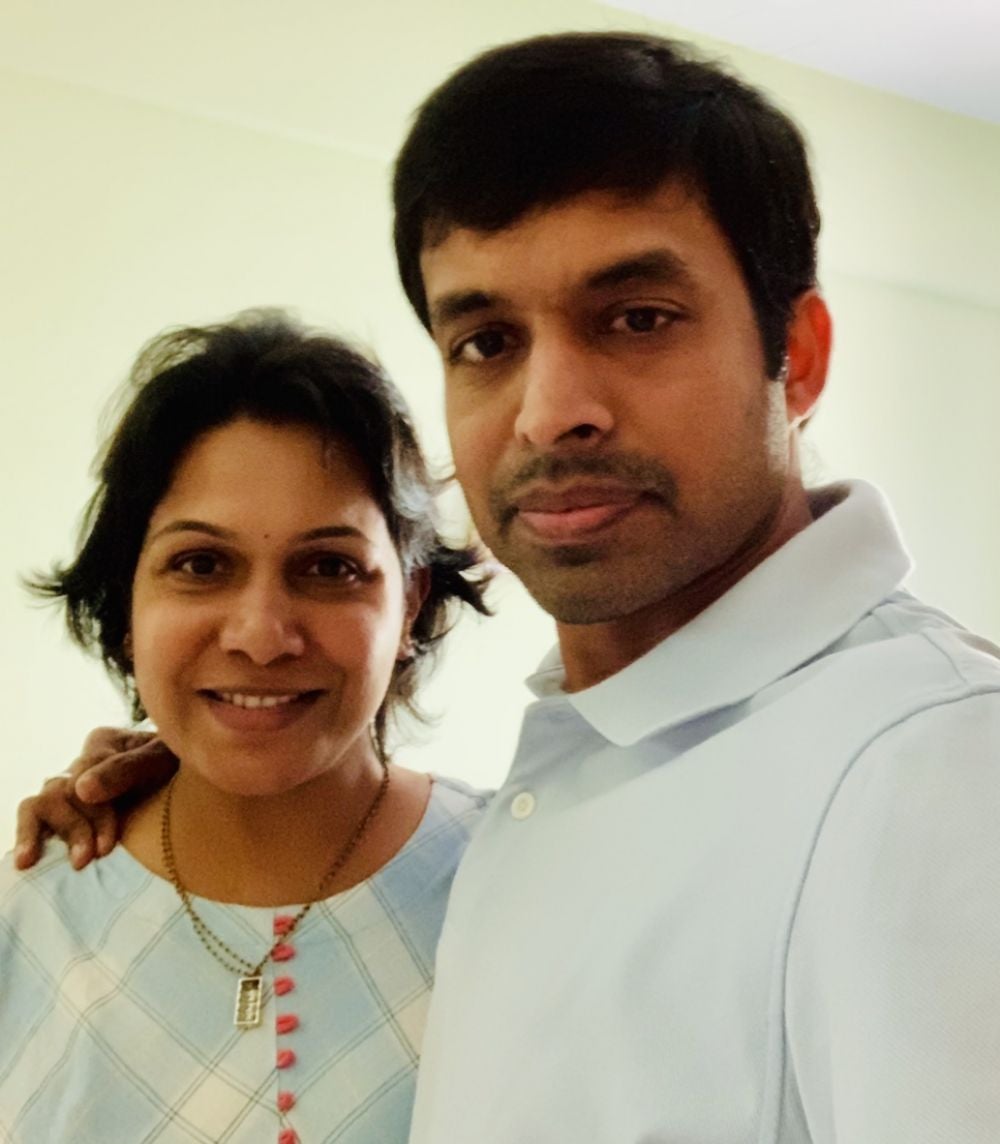 When Entrepreneur interviewed 1996 Atlanata Olympian PVV Lakshmi, wife of the Padma Bhushan and Arjuna Awardee Pullela Gopichand, she was engrossed in watching her daughter Gayathri’s live match on YouTube.

Her prompt reply was that Gayathri had won the match. The faint gumption in her voice reverberated the toil that she and Gopichand underwent for their daughter’s success. After marrying Lakshmi in 2002, Gopichand bid adieu to the sport in 2004. Lakshmi and Gopichand had realized the torment of not having requisite facilities and coaches for their training. After retirement, Gopichand strived for eradicating the problems that he had encountered. His career was cut short due to injuries and lack of management in the sport. Thus, began his second innings as a coach. He aimed to build a state-of-the-art facility for the budding shuttlers of the country. There came a time when the duo had to mortgage their house for establishing the first Gopichand Academy in Hyderabad. “It was an arduous time for us. The kids were young and we had a loan on our head. But Gopi wanted the sport to be beneficial for players,” she iterates.

After the success of the first academy in Hyderabad, a second facility was opened as a part of 40 acres Shahid Vijay Singh Pathik Sports Complex in Greater Noida in

March 2017. It was India’s third and North India’s first High-Performance Center at the time.

For 17 years, Gopichand and Lakshmi have been through thick and thin of times. “I have never ever opposed any of his plans and have always backed him,” she says. Lakshmi feels that Gopi has evolved over time as a player, coach, and entrepreneur. “He always had the grit, devotion, and dedication as a player but as a coach, he matured those qualities,” she concludes.

A Space of their own 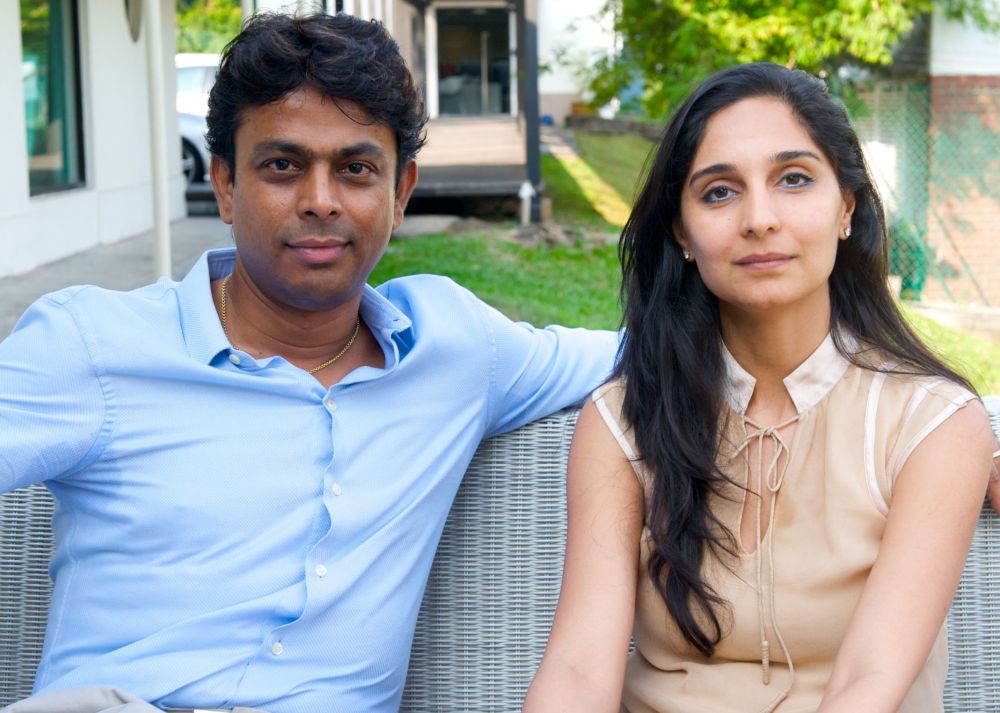 Anurag had started working in Singapore in 1993 and visited India in 1995 and met Shagufta who happened to be his colleague’s classmate on one of these trips.

After this formal meeting, Anurag returned to Bangalore for work and knew none in the city except Shagufta. Coincidentally, their offices were opposite to each other and that’s where their interaction grew into conversations. Shagufta who had graduated in Architect Engineering had her own business at that point in time. After four years of a long-distance relationship, they got married in 1999.

Post marriage, the couple moved to Singapore that’s when Shagufta wanted to set up her business. She founded an interior design company in 2001 named Space Matrix. Today, it's counted amongst the top 10 workplace design firms in the world. Around the same time, Anurag moved to London. As Anurag didn’t like his work there and wanted to move back to Asia, that’s when the idea of working together for Space Matrix clicked the couple. In the year 2006, when the couple thought of starting a family Anurag started focusing more on Space Matrix. Moving from being a professional to an entrepreneur in 2012 Anurag thought of starting Jungle Ventures to invest in tech platforms. Even Shagufta went on to be a serial entrepreneur and co-founded Livspace in 2014 and

Saltmine in 2016. “Anurag is a very calm person and extremely focused. That doesn’t leave any space for conflicts.” As per Anurag, “Whatever decisions we take have been in discussion with each other, keeping the ego out,” Shagufta says.

The couple has been together for the last 24 years making a great working combination of an entrepreneur and a VC. Their skills are complementary. While Shagufta can conceptualize new ideas and can also see and solve a problem very early. She is strong with customers and clients. Anurag can work on finance, strategy, culture building, vision, leadership development, M&As. 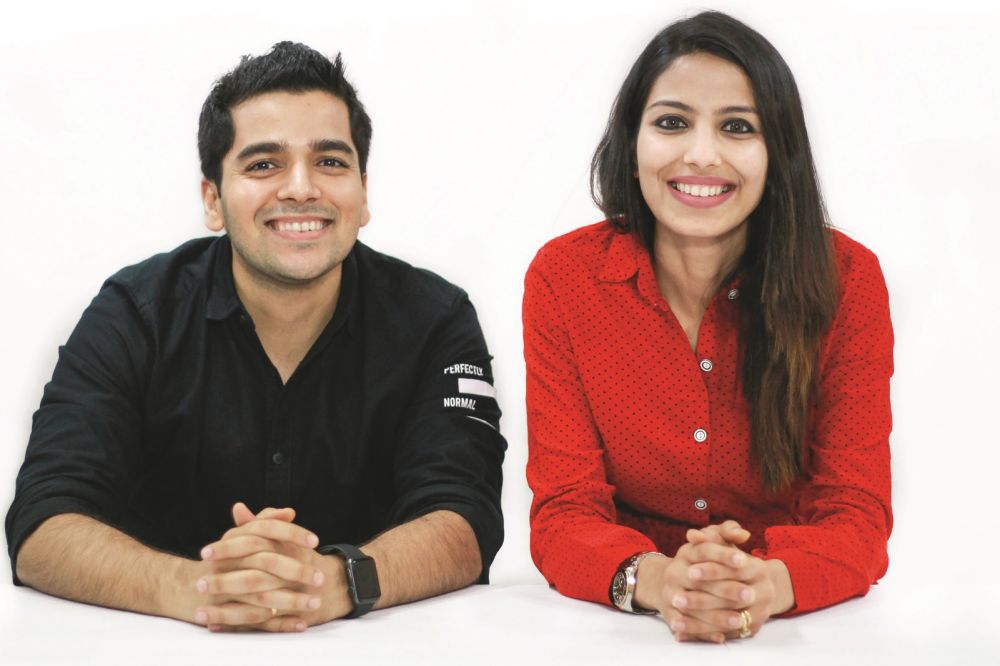 Internet entrepreneurship is tough, believes the duo behind Impact Guru — an online crowdfunding platform started in 2014 to empower individuals, NGOs and social enterprises raise funds for medical emergencies, personal needs or a social cause.

Proving that patience is a virtue, the couple is glad that they didn’t close their venture, a move they had considered to be pragmatic at a point.

Today, Impact Guru has successfully mobilized over Rs 150 crore across 15 countries via its platform. It claims to be the largest crowdfunding platform in India for medical emergencies, benefiting over 20,000 patients with 200,000 donors on board.

The duo shares that often they are so busy managing the business that they forget to take a pause to realize the impact of their work. Sharing a real life incident that speaks volumes about the kind of work they are doing, Khushboo says, “A woman named Gopi raised Rs 45 lakh for her husband’s medical emergency. When I went to meet them in the hospital, both had tears in their eyes. I actually realized that our work was saving lives.”

The duo believes, it is moments like these that give them strength in difficult times. However, while working together professional disagreements do arise at times, the two call final shots only in their respective domains, well aware of each other’s expertise. “While initially, everything from preparation, research and brainstorming was driven by us together, the responsibilities today are different. Piyush looks after the overall strategy and finance, and I oversee the brand building process,” says Khushboo.

Committed to making healthcare accessible to all across geographies, the company aims to go global and is shortly seeking to foray in the Middle East. “We are on a mission to make and save more lives and cast the ImpactGuru net across geographies,” Piyush says.

How Indian Couples in Business Are Breaking Age-old Myths