Can marriage and business co-exist? Here's the answer
Next Article

Married to work? Yes, these are couples who want to create their dream business together. Five couplepreneurs use the power of their connection to live happily ever after as life and business partners. 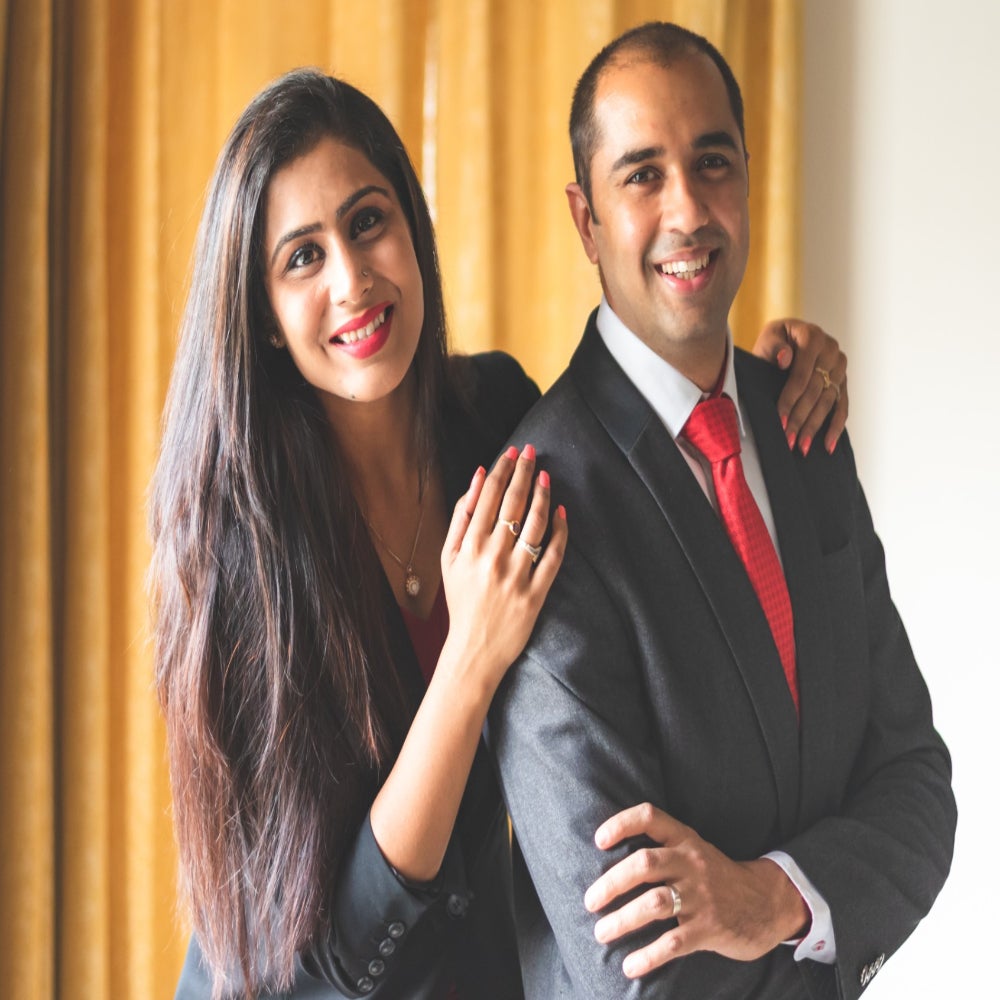 The idea of a 100 per cent toxin-free baby products brand MamaEarth occurred to Varun Alagh and his partner and co-founder Ghazal when they became parents and had a difficult time finding chemical-free products for their son. Starting up with your spouse is like embarking on the adventure of a lifetime with your best friend.

“It is one of the best things that happened to us but not without the ups and downs that come with starting any business. Trust and appreciation are the most important between partners for a successful relationship, whether it is business or marriage,” says Ghazal.

In a span of three years, Mamaearth has launched a range of 80+ natural products, has reached over 1.5 million customers in 500 Indian cities, and is the fastest-growing FMCG start-ups to hit 100 crore run rate. Driven by innovation, the start-up uses the best of science and Ayurveda to stand out in the personal care space.

Talking about the rules the couple plays by, Ghazal has an advice to offer. She says, “Raise your start-up like you would raise your own baby, trust your instincts and ask for help whenever you need it. Be honest and ethical.” The couple is particular about not discussing work issues at home and spending an hour together after office as a couple, and not as business partners. 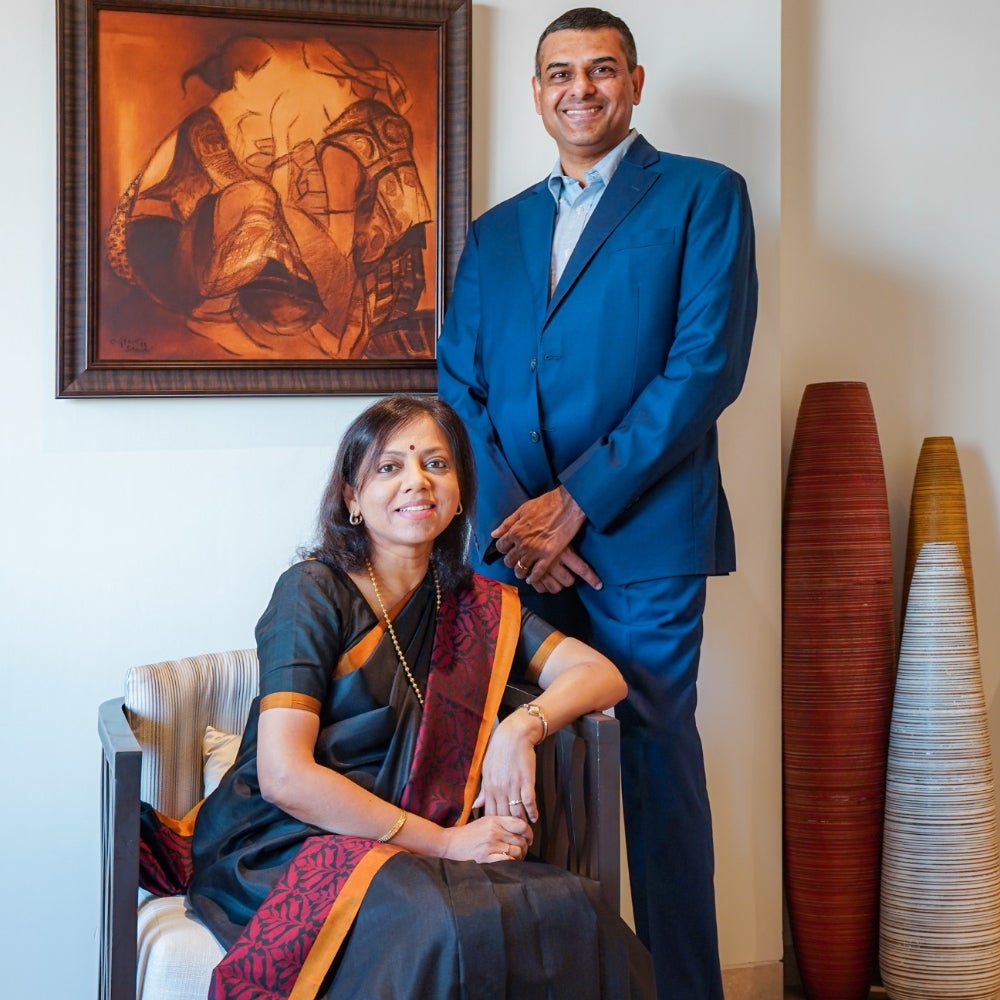 Mukund and Sou­mya Rajan first met in 1992 while studying at Ox­ford. Both of them decided that after completing their degrees, they would return to India. What followed was a 17-year bank­ing career for Soumya at ANZ Grindlays and Standard Char­tered Bank. Her last stint was as Managing Director and Head Private Bank, India at Standard Chartered during 2008-10. Talk­ing about her entrepreneurial journey, Soumya says, “I turned 40 in 2010 and realized that I wanted to do something more.” Looking at a broken wealth man­agement model, she founded Waterfield Advisors, a multi-family office and advisory firm.

After his doctoral dissertation published by Oxford University Press in 1996, Dr Rajan began his career with the Tata Group where he spent 23 years in a number of senior executive positions. In 2019, he launched ECube Investment Advisors, with a focus on Environment, Social and Governance (ESG) issues in India.

When asked why they never thought of starting something together, Mukund laughs saying, “An insightful person in business once told me that people should not worry about the same prob­lem. So I think its better that we craft our own thoughts to bounce ideas off and talk over problems. Had both of us been in the same business, we would worry about the same issues and take the same problems back home.” One area of col­laboration where both share the same cause is the Rajan Family Charitable Foundation founded in 2015, through which both of them give back to society. The foundation currently works in the areas of homelessness, education and healthcare.

Since Saumya started her entrepreneurial journey earlier, her learnings came in handy for Mukundwhile for Soumya, it was helpful to have a partner who believed in her dreams and let her pursue it. She says, “It’s im­portant as women to have sup­portive husbands and families that enable you to pursue your dreams.” Watching her handle tough situations has been inspirational for Mukund. When asked about how he would like to see Soumya achieve more in the future, Dr Rajan says, “When you’ve established a power­ful business model and the proposition in domestic market, you need to take that next leap to think about other markets globally that you can address. There is an equal opportunity for her in the global markets.” In fact, Soumya would soon be es­tablishing offices in the United States, Singapore and United Kingdom.

When not crunching num­bers, both of them are movie buffs who also prefer sharing their music playlists on iphones. Music was actually the one commonality over which they connected. Soumya’s mother is a music teacher and while at Ox­ford, she realized Mukund was the only one who understood music. Besides movies and mu­sic, both of them enjoy a game of badminton that continues even as they would celebrate 25 years of partnership this year. 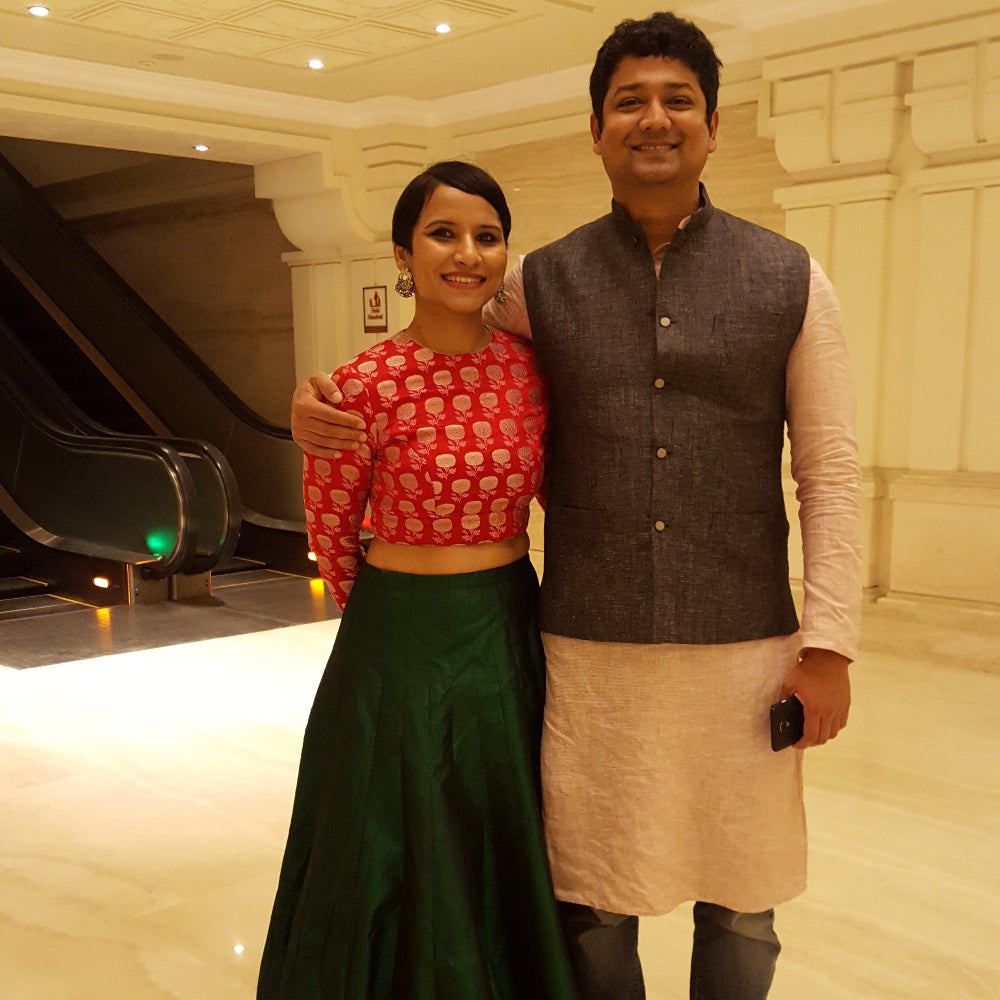 Arjun Shetty & Rati met each other 20 years ago. As a part of student organization in college, they met through common interests. 13 years of their marriage also resulted in the 12-year-old journey of BankBazaar, which the couple co-founded with Arjun’s brother Adhil. Talking about the bond, they say, “We have known each other for more than half of our life actually.” The 1,200 employee start-up started with an idea to help people have a paperless journey of navigating the world of loan or insurance. They recall, “In 2007, when we were looking for a home loan, there was a lack of digitalization in this sector. Just when India had started picking up those practices, we felt there was an opportunity here for us.”

Talking about their different skill sets, they say, “We bring different skills to the team and this has been beneficial as we’ve been able to pick our areas of ownership, not have too much overlap, yet be able to bring variety to the table.”

One of the drivers of their success lies in their ability to be able to get excellent people on board who believed in their vision. On managing disagreements, the couple says, “Trust is our dominant value, because the assumption is, he or she is going to take the right call for the company. Even if you have a certain contention about something, you have to be open-minded to be convinced about it.”

Their journey of finding a partner in each other has been about sharing ups and downs in professional as well as personal lives. Sharing the same, Rati says, “I had a fall four years ago, and this affected my work because I was out of office for four months. I fell and then they discovered that I had a tumor. I think it led me to look at life from a completely different angle. I got support and encouragement in times most needed.”

Sharing advice for couplepreneurs, Rati feels, “A very wise and successful person in our family told me not to mix family with business. But, you know, I did exactly the opposite.” That, pretty much, sums up her approach. 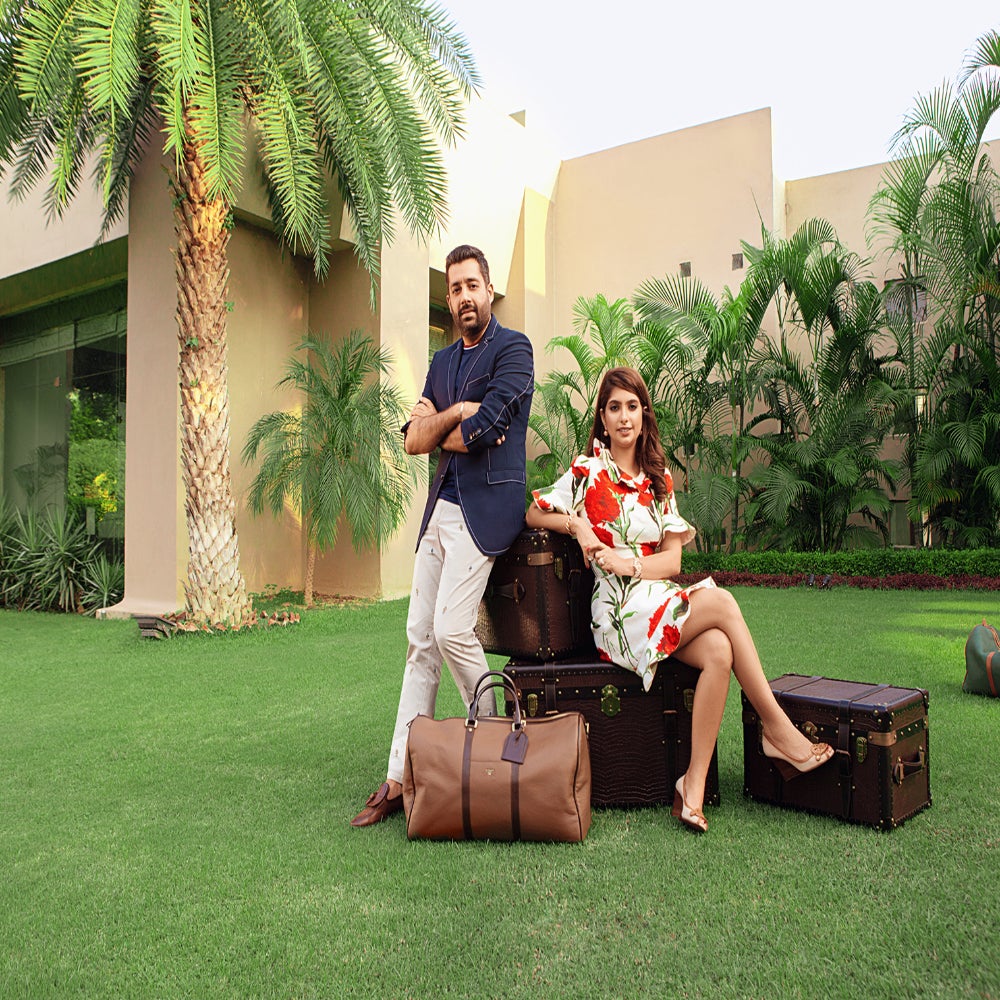 Both Sahil and Shivani Malik had gone to London School of Economics for a three month course when they met over a common connection of being Delhiites. Sahil at that point had just got into the family business, set up by his father in 1989. Only one store had opened up then for leather accessories brand Da Milano. The young couple, Sahil (21) and Shivani (18) at that time were sure that they want to do something more. She further went on to study at Warwick Business School.

In 2007, the couple tied the knot and Shivani joined the business. At that time, the brand had only two stores. Recalling the same, Shivani says the set-up was quite small then. The only aim they had in mind was to make it a national brand. From the two stores on high streets, they opened up the first store at a mall in Delhi. With quality and after-sales service, the brand grew further. It was in 2011, when the two launched Rosso Brunello, a footwear brand.

Talking about coming together as a couple to set up the brand, Shivani says, “We knew each other’s strengths and weaknesses and that’s how we learnt to work together by defining our roles.” Currently Shivani looks into marketing while Sahil focuses on operations and business development. According to her, “Sahil always has the big picture in mind and I am the one looking into the finer details.” The brand has now grown into 90 stores including the international ones. On ironing out disagreements,

Shivani says, “We need to give respect and space to each other while lending a patient ear even if a decision has gone wrong.”

She advises to keep ego out of the room and urges couplepreneurs to support each other. Parents of two, both Shivani and Sahil have a rule of not taking work back home but Shivani complains, “Sahil is a workaholic, so he keeps slipping back into work mode.”

Going forward, the couple is eyeing the European market and aiming to grow a couple of brands under their kitty.

THE KING & QUEEN OF SNACKS 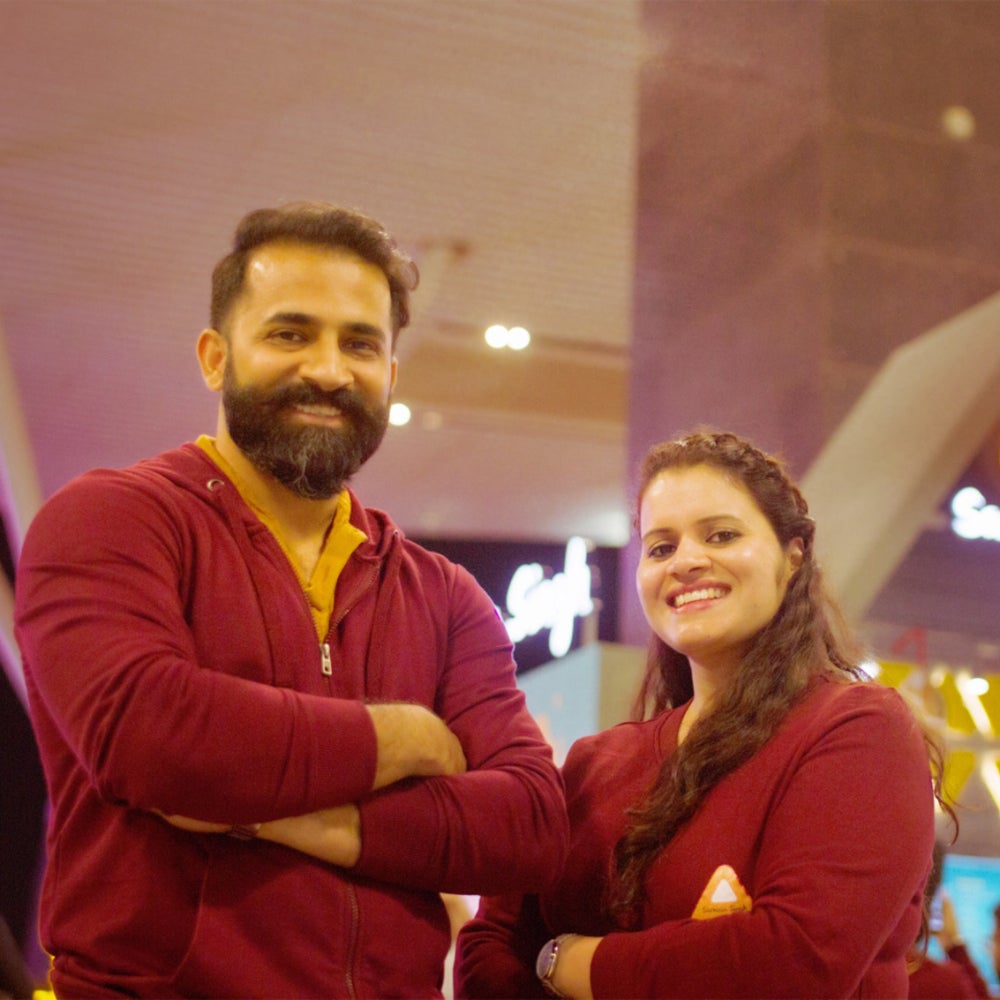 Ask Nidhi Singh and her husband Shikhar whether being a couple gives them an extra edge in running their venture, they agree in unison.

“We have been together for 10 years and covered a long way together. This has given us the power to understand each other better, both professionally and personally,” says Nidhi.

Shikhar quit his job on the very same day they agreed on the idea but Nidhi continued to work for some time to manage daily expenses and streamline finances. The Samosa Singh founders took this astronomical risk of putting all their savings into the business as well as selling their house. Samosa Singh was founded in 2016 with the objective of reinventing the samosa and presenting it to customers in new and exciting ways. The start-up aims to expand in 100 plus cloud kitchens by end of 2020. It currently operates in Bengaluru and Hyderabad, with plans to consolidate its presence in South India in the coming year. Among the brand’s unique offerings are kadai paneer samosa, achaari murg samosa and their trademark chocolate samosa.