Through cause marketing OneHope is working to improve many lives.

By Jason Daley
November 12, 2009
This story appears in the December 2009 issue of Entrepreneur. Subscribe »

For Jake Kloberdanz, the desire to try and help change the world was sparked by a retail trend he happened to notice in 2005. 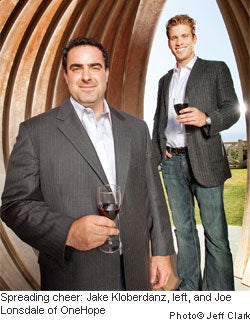 "I was stocking a lot of shelves in grocery stores and saw that charity promotions like Yoplait's breast cancer project got great floor space and sold well," says Kloberdanz, who at the time was the district sales manager in greater Los Angeles for the Gallo wine company, one of the largest distributors in the world. "Why not start a whole brand built on serving other causes? It wouldn't ride on the coattails of the charities we serve--we'd try to build a product with good value and serve nonprofits outside of using their name."

Kloberdanz mulled the idea over until April 2006, when a good friend was diagnosed with Hodgkin's lymphoma. "Until then, in my head, cause marketing was just a salesman's dream," he says. "It wasn't until my friend got cancer that I said 'I have to do this.'"

Jake and seven colleagues, all in their 20s, made the difficult decision to leave their jobs at Gallo to start OneHope wine, partnering with Sonoma Wine Co. and vintner David Eliot. The idea is simple: OneHope, a for-profit company based in Irvine, Calif, tries to sell as much quality wine as possible, and 50 percent of its profits go to charity. Sales of the merlot go to AIDS research, the sauvignon blanc supports the environment, and the zin goes to causes that support U.S. troops.

OneHope is projected to hit $1.5 million in sales for 2009 and has thus far donated $250,000 in cash and in-kind contributions to 150 charities. The company now ships its $20 bottles of vino to online oenophiles in 30 states, and it recently sealed a deal to sell wine at Young's Market in six western sates. Distribution deals with other grocery chains, including Safeway, Vons, Albertsons and Ralphs are imminent, Kloberdanz says.

But OneHope has its sights set on more--it wants to leverage its name into a whole cause-oriented lifestyle brand. The company is looking into a deal to create OneHope bottled water, and it recently partnered with Wintech to launch a OneHope-branded flash drive that benefits Dress for Success, which helps underprivileged women prepare for job interviews. Kloberdanz is looking for more collaboration with Silicon Valley, and recently brought aboard 27-year-old Joe Lonsdale, former PayPal protégé and founder of Palantir software, to head a board of directors.

"In Silicon Valley, wealth and value creation are focused around technology and the ways it can change the world, not on creating wealth for its own sake," says Lonsdale, who thinks OneHope will go over well with techies. "People there feel it's their duty if they're successful to help make the country work better."

Besides bringing wine and RAM to the masses, Kloberdanz hopes his business can be a template for a new take on capitalism. "Big business runs politics and the world--we can look towards politicians all we want, but creating change starts with big business," he says. "If we can educate businesses and get to a point where companies can get a competitive result, but a result that gives to others, we'll be making a major step toward changing the world."