Need a business idea? Have a baby. Meet some entrepreneurs whose role as fathers led to successful ventures. 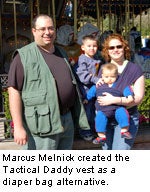 He's a public safety analyst for a police, fire and EMS department in the suburbs of Chicago. But in his off hours, Marcus Melnick toils 20 or more hours a week working on Tactical Daddy, a vest with plenty of pockets for stuffing diapers, toys and other useful baby items. He created the product as an alternative to frilly baby diaper bags after his second son was born.

Melnick is hardly the first father to create a brand based on babyhood. As dads have become far more involved in the parenting process than previous generations, they're getting a lot of inspiration from their children. You've heard of mompreneuers? Meet some dadpreneuers. 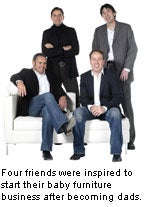 Simon May runs bloom with three other dads--Jason Lewis, 36, Francisco Balderrama, 38, and Jon Lake, 41. They began to discuss creating a startup more than three years ago, but it wasn't until last year, when they all started having children, that they figured out what their product should be--baby furniture. After years of working together at an international conglomerate, May says that as parents, they all found themselves thinking differently.

"Suddenly, when you're a parent, you're thinking about the products you're designing in a different way," says May, 39, who has a little girl and a son on the way. "You're still focused on function, design and marketability, but you imagine your baby in that product, and you think even more about safety and comfort."

That way of thinking has paid off for May and his co-workers. Bloom is already a global company with 50 employees and branch offices around the world. The owners, who themselves are spread across the globe, expect sales of their upscale furniture to reach $20 million to $25 million in the next year.

Of course, the people who buy furniture from bloom will need to clean it, and that's where Kevin Schwartz comes in. His company, Healthy Home Products, sells BabyGanics, a line of organic sprays and cleaners that will make floors sparkle and windows shine--without exposing children to harsh chemicals. It's an idea that Schwartz never would have stumbled upon if it weren't for his dog. 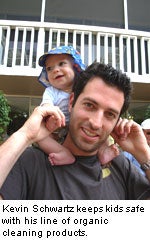 Schwartz was already an entrepreneur specializing in organic products for his pet when his dog, Tucker, began having skin issues underneath his snout. Schwartz was perplexed, since Tucker was immersed in organic pet foods. Then one day, Schwartz realized that whenever Tucker begged for food, his snout rested on the glass coffee table, which he and wife frequently scrubbed with Windex. His vet confirmed the ammonia in the cleaner was the culprit.

So Schwartz, who was trying to start a family with his wife, decided to expand into organic baby-friendly products. If a toddler ingests a BabyGanics household cleaner, a parent can calmly take it away instead of calling 911.

BabyGanics was launched last year and can be found in every Babies R Us store, as well as other chains, like Bed, Bath & Beyond. Schwartz projects that in the next year, Healthy Home Products could be making $3 million to $5 million in revenue, and he notes that by the end of September, his cleaning solutions are slotted to be in 1,200 stores across the country. "Becoming a parent when you're an entrepreneur really gives you a sense of drive and reinforces what this is all for, why I work," Schwartz says.

Kenny Kramm, 46, couldn't agree more. He was a pharmacist in Bethesda, Maryland, and probably wouldn't have changed things, were it not for the problems his baby daughter, Hadley, was having taking her medicine. After being born prematurely, Hadley began having seizures while still in the hospital and developed cerebral palsy after not receiving the proper medication soon enough. 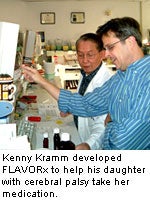 As a result, she needed to take numerous medications, including an anti-seizure medication with a very bitter taste. As she grew older, she began refusing to take it. Kramm, who had been working in his family's pharmacy since the age of 12, toiled for about a week with his father, Harold, and finally developed a banana flavoring that not only masked the bitter taste of the medication, but also didn't affect the contents.

Ever since, Hadley, who is now 15, has never had to go to the hospital because she hasn't taken her proper dosage. Kramm wanted to help other families, too. His product, FLAVORx, is now available in more than 35,000 pharmacies nationwide, including Walgreens, Wal-Mart, Target, CVS and Rite-Aid. More than 50 million prescriptions have been flavored with FLAVORx.

Kramm could have become bitter and sued the hospital over his daughter's condition. Instead, he prefers to talk about Hadley and his older daughter, Sarah, barely pausing to acknowledge that he has created a multi-million dollar business. It's an enterprise that will do what all dadpreneurs hope for--help his children, particularly Hadley, who he knows will have the money to be cared for, long after he and his wife are gone.