The Benefits of Pregnancy

These pregnant entrepreneurs show that being a human baby carriage has its advantages.

By Alexa Vaughn February 21, 2008
Opinions expressed by Entrepreneur contributors are their own.

Morning sickness, unexpected Braxton Hicks contractions and planning for your newborn--they're all part of being pregnant, and the experience is rarely seen as more than an obstacle in the business world. But as many "mompreneurs" know, this life-altering stage can motivate and teach women how to run their businesses better.

"Pregnancy was new to me and business was new to me," says Meg Mateo Ilasco, who was blindsided by pregnancy right after quitting graduate school to start an independent craft business in 2001. "I was just open minded and felt like I could do or try anything."

Though the experience was exhausting, Mateo Ilasco said the combination improved her concentration on the startup. "I didn't talk to a lot of people at that time," she admits. "But that's also why I was able to be in my own bubble, taking care of business and taking care of my kid."

Now Mateo Ilasco, mother of two, runs her own craft store in Berkeley, California. On the side, she pursues designing projects, consults other startups and reaps the benefits of her recently-released book Craft Inc.: Turn Your Creative Hobby Into a Business.

Being in the third trimester of pregnancy also didn't stop Joyce DeLucca while starting up her successful Wall Street investment group, Kingsland Capital: The company closed their first $400 million CDO fund 90 days after the birth of her first child.

And she got the company there with a fully protruding belly while she courted investors--ones used to the strict work ethic and traditions of Wall Street.

"When I was marketing to investors at seven months, it was obvious to them that something was about to happen and that concern had to be addressed in a very straightforward way," DeLucca says, admitting that she was often questioned how she was going to handle the pregnancy and who would make big decisions in her absence.

"We went through [our plan] very specifically so they knew we had set up processes for decisions to be made in my absence," DeLucca says. "We described it like this: Look, if I'm on a plane trip to Tokyo and you can't reach me by telephone--you deal with labor in the same exact way." Because of her pregnancy, DeLucca said she organizes her office and her day more efficiently than ever before. 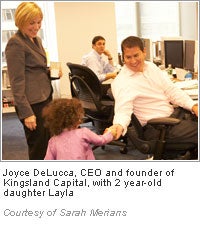 DeLucca, who is in her third trimester with her second child, continues to grow her business by being sensitive to her employees' family needs and recruiting more talented staff members this way. Because many of the staff members are in their 30s and have families, DeLucca gives them remote access to work in case one of the kids is sick at home. Her company is also contemplating the placement of a day-care center next to the office.

But sometimes pregnancy isn't just the force that drives women entrepreneurs to focus and organize their businesses; it's the inspiration for a new business venture.

While hauling her basketball-sized belly around town to find unique high-end baby merchandise, it occurred to Penny Domschot that she knew exactly how to use her trade show expertise in another arena.

Domschot already co-owned Seascape Productions, an event production company with fellow mom Patrice Meluskey, and had sold their San Diego Interior Design and Landscape Expo creation for millions a few months before. After selling what she called "her baby," Domschot felt the need to fill her creative void. In this way, the concept of Baby Celebration, a designer baby merchandise trade show hosted in Los Angeles every year, was conceived.

The show highlights everything from baby fashion to playgrounds and Domschot says it's been one of the most fun and flexible projects she has worked on because she can have her kids not only be at work, but work with her, as in the case of her oldest daughter Chelsea while she goes to college.

"Being pregnant and being a mom teaches you to be a master juggler that goes all day long--and that's really the essence of being an entrepreneur," Domschot says. "So it's really the best training you can get in so many ways."