Finding the Right Price for Your Retail Products

Ronald L. Bond
May 25, 2008 4 min read
Opinions expressed by Entrepreneur contributors are their own.

This article has been excerpted from Retail in Detail by Ronald L. Bond, available from Entrepreneurpress.com

You often see or hear retailers' advertisements that promise you "quality merchandise at a fair price." Well, just what is a "fair price?" As you enter the retailing arena, you will soon learn that there really is no universally accepted definition. Most of the time the answer is "It depends. . ." It depends on how much you paid for the merchandise, who you bought it from, what your competitors are charging, your overhead expenses, your sales volume, and a hundred other variables.

How you establish prices for your merchandise will be one of the most important decisions you will make, since it directly affects that all-important variable, profit. You must strike a delicate balance, setting a price that is high enough to allow you to achieve
a reasonable profit margin and yet low enough to keep your merchandise affordable and competitive.

The Ethics of Markup
Even though there is no hard and fast rule for pricing merchandise, most retailers use a 50 percent markup, known in the trade as keystone. What this means, in plain language, is doubling your cost to establish the retail price. Because markup is figured as a percentage of the sales price, doubling the cost means a 50 percent markup. For example, if your cost on an item is $1, your selling price will be $2. Fifty percent of $2 is $1, which is your markup.

This definition of markup was probably developed to avoid using a term that admits to a 100 percent increase. Most consumers would be appalled that you are selling something for double what you paid for it. They would be inclined to ask why you don't carry a gun and wear a mask. Most consumers have had no exposure to the myriad costs associated with retailing and they are used to thinking in terms of net profit margins they have heard in the media. For example, an article in the business section of a newspaper might report that Mega-Mart had sales of $500 million and earned a net profit of 4 percent. An uninitiated reader might conclude that Mega-Mart marks up its goods only 4 percent. In reality, net profit is calculated after overhead expenses have been subtracted from gross profit (total sales less cost of merchandise).

Because of these common misconceptions about pricing on the part of the buying public, don't be surprised that some of your customers think you are Jack the Ripper when they find out about your markup.

Although it is true that higher volumes will make up for lower prices to some extent, unless you can sell as much as a Kmart or Wal-Mart, you absolutely need at least a 50 percent markup (keystone) to survive in a small retail shop. Although doubling the price may sound outrageous, it does not result in excessive profits when you consider the expenses for rent, taxes, insurance, supplies, labor, etc., that you must pay.

Sometimes you will have to sell an item at a lower markup, if you believe you cannot compete at a full keystone markup. Be careful, however, not to price too many items this way or you'll find nothing left for yourself at the end of the year. You can try to balance it out by marking some items up slightly higher to compensate for the lower markups on others. You can do this when you get a special discount or are able to buy items direct from a manufacturer. If you decide to use a markup other than the standard keystone
(50 percent), here is a quick way to calculate your selling price:
Selling price = [(cost of item) ÷ (100 - markup percentage)] × 100

Do not multiply the cost by 35 percent and add that amount to the cost. That will produce a retail markup of 17.5 percent, not the desired 35 percent.

Don't overlook freight costs in your cost of merchandise. If your competition will allow, add the freight cost before you apply the markup. Most of the time, however, you will simply have to add freight to the marked-up price, thus recovering only the cost of the freight. 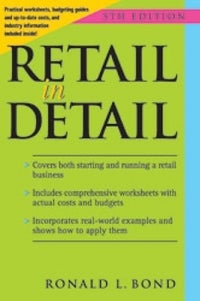 Your Brand Is Much More Than Your Logo. Here's What Really Makes Your Brand Stand Out to Customers.

Get to Know the 3 Types of Influencers