Complacency: The Enemy of Success

Avi Savar built a successful business by taking risks and adapting to an ever-changing market.

By Robert Tuchman June 4, 2010
Opinions expressed by Entrepreneur contributors are their own.

There is a popular idea that if a person is not always moving forward, he is moving backward. Nevertheless, a sense of complacency is something that plagues many individuals throughout their professional careers. To many, it seems only natural to coast along when they achieve a certain level of success. However, within the entrepreneurial world, the most successful business minds are never content with the status quo. There is always room for improvement, always room to grow.

Meet Avi Savar. After spending years working with some of the biggest names in the entertainment industry, Savar launched Big Fuel Communications in 2004, one of the first branded content and social media companies in existence. Since then, he has successfully turned the New York-based company into an industry leader in marketing and communications, collaborating with several major brands, including MySpace, Fox, NBC-Universal, Neutrogena and Colgate-Palmolive. 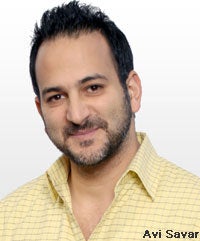 For years, Savar worked as an independent producer, creating programming for industry heavy hitters such as MTV, VH1, Fox, and ABC. However, despite this success, Savar kept searching. His goal is always to build something valuable and keep building.

"I know that Big Fuel will not be my only endeavor," Savar says, noting that what drives him is a passion for motivating people and the vision to see things that are not there yet. "Making something out of nothing--that's what I love."

While working for Viacom in 2004, Savar noticed that the broadcast television model was beginning to shift. With the emergence of digital content, Savar saw his opportunity to pioneer a new, innovative form of communication. That's when Big Fuel Communications was born.

Savar attributes the company's success to his ability to make calculated decisions while adapting to a constantly shifting economy and market. "I'm inherently a risk-taker," Savar says. Comfort is the enemy of growth, he adds. "I constantly strive to push myself, my business and the people around me forward." Knowing that he's a risk-taker forces him to pay close attention to detail and make careful assessments of what's happening in his business, the industry, and amongst the competition.

The entrepreneurial world is often unpredictable, and some days are more challenging than others. Nevertheless, Savar has never considered throwing in the towel. There were certainly rough times, he admits, but Savar never saw failure as an option.

"Adaptability, flexibility and perseverance are keys to building success--and most importantly," Savar says, "the ability to learn and grow from every situation, both good and bad."

It is this ability to persevere through adversity that has resulted in great achievements. However, one individual can only take a business so far. Most of the time, the success of any business ultimately depends on the team in place. Savar says that knowing this has led him to surround himself with amazing people.

"[I have] a team that can provide me with all the information required to make calculated decisions," Savar says. "[My] team can sometimes become the voice of reason. Being both a risk-taker and being humble are characteristics that have meant the most to me."

Building this team culture has been integral to creating Big Fuel's strong foundation. Savar says it has helped foster a productive working environment and made the "extremely hard" work he and his team do fun.

Savar points out that nothing comes easy and that if something is worth having, it requires hard work. He encourages young entrepreneurs to be resilient because there are no short cuts. There really is no "off" switch when running your own business, he adds. And ultimately, success usually comes down to drive and perseverance.

Robert Tuchman is the host of Entrepreneur's How Success Happens podcast and a founder of Amaze Media Labs an agency that creates podcasts for companies and brands. He built and sold two Inc. 500 companies: TSE Sports and Entertainment and Goviva acquired by Creative Artists Agency (CAA).