A Winery and Inn Along the Foxen Canyon Wine Trail

By Touring and Tasting December 17, 2010
Opinions expressed by Entrepreneur contributors are their own.

The story of these family enterprises began in 1989 when Fess and his son Eli planted a small vineyard, intending to sell the fruit to local wine producers. The initial planting was White Riesling, covering just a little more than five acres. Today, Fess Parker Winery & Vineyards has more than 300 estate acres that grow Chardonnay, Pinot Noir, Syrah, and Viognier.

The vineyard closest to the winery building, named for Fess's late son-in-law Rodney, is one of the most established in the area and is considered by Robert Parker to be "an emerging 'Grand Cru' site in Santa Ynez." Wine Spectator has also given a nod of approval to the vineyard, awarding the 2006 Rodney's Vineyard Syrah 90 points. But what matters most to the people who work here -- including Eli, Fess's daughter Ashley, and son-in-law Tim -- is that the wines are approachable, reasonably priced, and beautifully made. 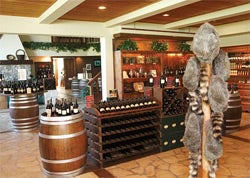 In 2005, Santa Barbara local Blair Fox was named the winery's head winemaker. Continuing the stylistic direction set by Eli in the early vintages, Blair uses many of the techniques used by the French masters of the Rhône Valley and seeks to craft the finest wines from the best vineyards in Santa Barbara County. His wines have won many top awards, and Blair himself was named Andre Tchelistcheff Winemaker of the Year at the 2008 San Francisco International Wine Competition.

The winery is found along the Foxen Canyon Wine Trail, a narrow country road that winds past ranches peppered with grazing cattle and low-lying oak trees. Its acre of grounds is level and serves as a pleasant picnic site with a dramatic mountain backdrop. Once it was up and running, Fess recognized the need for a nice place to stay nearby. "He wanted to make it easy for people to come up to Santa Barbara wine country and see what was going on," Ashley explains. So the Fess Parker name appeared again, this time in the tiny nearby town of Los Olivos over the door of a charming inn.

Fess Parker Wine Country Inn exudes wine country elegance. Each of its 20 rooms was personally decorated by Fess's wife Marcy and offers a fireplace, fluffy down comforters, and many other creature comforts. The inn's new restaurant, Petros Los Olivos, features upscale California-Hellenic cuisine from a tempting menu of Mediterranean delicacies, including a feta-crusted Colorado rack of lamb and a sautéed sea bass filet with artichokes.

There are more tasting rooms than even the most enthusiastic wine taster can visit in a single day -- all within walking distance of the inn. What makes tasting even nicer is the fact that inn guests receive complimentary tastings at three different spots around town. When done exploring, guests can return, lounge by the outdoor pool, and indulge in a spa treatment if they like. The Champagne Spa & Boutique offers massages, facials, body scrubs, salon treatments, and more.

The entire Santa Barbara wine country experience comes together in the wines and inn that have earned Fess Parker's name.

Getting There
Directions are available on the website or by calling the winery or inn.