The Budget Deficit That Ate the U.S. 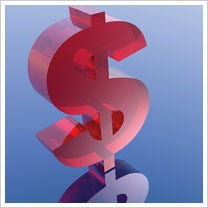 They say records are made to be broken. But few will be broken with as much vigor and flair as the budget deficit for the just-ended fiscal year, which will be broken by the fiscal year that began Oct. 1 of this year (if Wall Street estimates provided by The Associated Press hold true). This record won't be so much broken as smashed. And so quickly.

Woe be to the Fiscal Year ended Sept. 30, 2008, for your reign as largest budget deficit will last a scant 12 months. Your $454 billion shortfall will be talked about as part of a folksy, bygone era of pocket-change scarcity if projections for this Fiscal Year's deficit of $988 billion stand up.

In Last Fiscal Year's defense, it didn't have a $700 billion bailout package to finance.

To fund this excess of arrears, the Treasury Department plans to borrow $550 billion--this quarter. An additional $350 billion or so will have to be borrowed in the first three months of 2009. More powerful calculators are being designed to gauge borrowing for the rest of the year.

Welcome to the ball, Mr. Next President.