Is The Economy Headed Back Down Again? 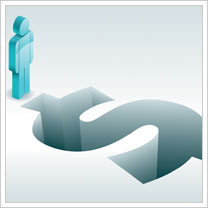 For a few months there, things were starting to look rosy for small business. Retail sales went up for eight straight months. Jobs started being created again.

But now, some experts are worried it's all going to go back down the tubes. Retail sales fell in May. Yeah, just the early-Easter effect, I thought.

But now the indicators are starting to mount up that maybe we're not out of this trough yet. Home sales are going down. Hiring stalled. Stock markets are doing loop-de-loos around the globe. But the big one a lot of folks are watching is the effect of the end of federal stimulus money, which is winding down.

Unemployment-benefits are running out for many and Congress isn't in the mood to extend them again. And given the debt we've already piled up as a nation, it's unlikely more federal bailout money is a-comin'.

I've been the first person to put my fingers in my ears and start singing "La, la, can't hear you" whenever economists uttered the evil phrase "double-dip recession." But now, I wonder.

One interesting way to look at the economy is through some alternative economic indicators from the traditional ones such as consumer spending, home sales and jobs. One I've found fascinating is the online Intrade Prediction Market, where individuals bet on various current events. Right now, bettors there only think there's a 15 percent likelihood we'll go into a new recession this year. (They predicted Obama's win early on, so checking this out is not as crazy as you might think.) However, recession in 2011 gets a 27 percent change. Disturbing.

What's your take on how the economy is trending? Will we keep on climbing toward recovery, or slide back down? Leave a comment and tell us your prediction.