Are You a Happy CEO? Twitter's Co-Founder Wasn't 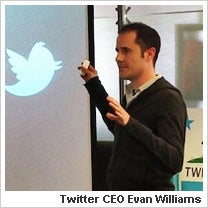 The blogosphere is buzzing this week with the news that Twitter CEO Evan Williams -- a co-founder of the red-hot social-media company -- is stepping down to "focus on product strategy." Company chief operating officer Dick Costolo moves up to the top slot.

Holy fail whale! What does it mean for the company's future? Why would he give up his chief executive role, just when the company is really taking off?

I've got a theory.

Often, company founders are idea people. They love inventing things, discovering things, the exitement of building something from the ground up.

Time rolls on, and the company grows. It becomes more successful -- and it becomes more complicated. The CEO's role gets bigger and bigger. They need to know about hiring, people-management, marketing, sales. If they like to create, they wake up and realize they're not getting to create anything anymore. And they're bummed.

That seems to be exactly what's happened here. Williams wrote on his blog, "Building things is my passion." He wants to get back to that.

He'll probably take a lot of criticism for doing it. People will say he couldn't take the pressure. Or that he was forced out by investors who think the company could be better run. (About that fail whale...we do see a lot of it.)

But likely it's a smart move that ultimately will make Twitter a better company. Product development is everything, really. At the end of the day, in the cutthroat world of social media, you have to innovate and have a great experience, or users stop coming -- just ask MySpace. By freeing Williams from the million other tasks that afflict CEOs, Twitter will have a better shot at staying popular and finding ways to make money off its fast-growing platform.

Also, heading a company like Twitter means living in a fishbowl-bubble. Maybe Williams was ready to take that thing off his head.

Most business founders quit Corporate America and start their own business because they're hoping that will be more personally fulfilling. They're hoping it will be fun. Once the business gets established and starts to grow, if they find it isn't fun, then it's time to tinker with their role at the company.

I think we see the opposite situation to Williams' move too often -- company founder/CEOs who stay in the top spot when they should move themselves back into a creative role instead, and let a bean-counter take the budget meetings. They get hooked on the power trip of saying they're the CEO and won't let go, even if they aren't the best manager for a fast-growing, medium-sized company and could contribute better as a free agent.

Often, at companies that are preparing to go public, the founder/CEO steps down to become chief technology officer or something, and a more experienced CEO is brought in to run things and impress Wall Street that the company has a seasoned team. That could really be what's going on at Twitter, too. Some bloggers report that investors are unhappy that Twitter isn't ramping up revenue fast enough.

Even if that is the reason why, the change is probably a good thing. Now, we'll see what Williams creates next.

Are you a happy CEO/founder, or would you rather someone else took that role? Leave a comment and let us know.