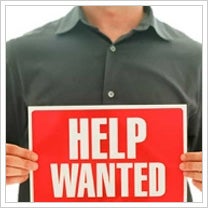 Now that the economy appears to be turning around a bit, small-business owners across the country are hoping that the long, dark months of cutting resources to the bone in order to survive the economic recession are over. So, as we look ahead to 2011, we wanted to know: Do you plan to hire more employees in 2011?

We posted that question yesterday to our Facebook fan page. The overwhelming majority of the roughly 60 responses we received (so far) indicate that our small-business readers are in fact intending to staff up in the New Year. "Absolutely. Don't let the economy slow your growth!" starts one commenter. "Yes. Let's hope the business comes in to support it," reads another. "No choice! Growth has a price and I want to grow."

The optimism in hiring also appears to translate to contract-work for solopreneurs, particularly for those with technology expertise. In fact, Elance, an online employment firm, says small businesses posted nearly twice as many jobs on its site this year -- totaling 11,000 -- that required mobile development skills, mostly for Apple's iOS, Google's Android, and RIM's BlackBerry, compared with 2009.

Among its predictions for contract-hiring opportunities for 2011, the Mountain View, Calif.-based company predicts that the mobile app develop market will continue to surge. "With the incredible market penetration of mobile devices this year, like the iPad, the just-announced 'Chromebook,' the iPhone 4 and 4G devices like the HTC EVO and Epic 4G, we're experiencing an explosion of demand for mobile developers," says Elance CEO Fabio Rosati.

Freelance opportunities for jobs like applying geo-location technologies and creating new mobile-friendly designs also are expected to grow in the market for social-coupon sites. "Several years ago, Woot! launched one of the first deal-a-day concepts, which has since been replicated by major retailers like Amazon, Best Buy, and Newegg," Rosati says. "Now, Groupon has transformed the industry by leveraging each person's social connection even more, turning online and local shopping into a viral experience. At Elance, we think that social connections are also relevant to hiring online and expect a major transformation of how we and our customers do businesses as a result."

Rosati says keeping up with accelerating changes in technology platforms will be a challenge for small-business owners next year. "We expect IT and marketing work to continue to dominate online, with pay rates for the hottest skills to increase until demand and supply balance out," he says. "For example, marketing professionals who specialize in online marketing (search engines, display advertising, social media) will be far more in demand and will earn more income than traditional and direct marketers. Programmers and developers who specialize in cloud computing platforms and mobile devices will also find huge opportunities as businesses race to keep up."

What about you? What are your staffing plans for 2011?