Skype: From Startup to $8.5B in Eight Years 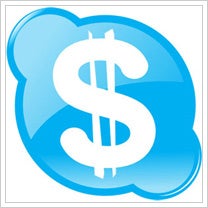 Tech giant Microsoft Corp. announced this week that it plans to buy internet calling service Skype for a whopping $8.5 billion in cash. But this isn't the first time a company has ponied up major dollars for Skype since it was founded by two European entrepreneurs more than eight years ago.

A quick history of the company and its founders follows.

Aug. 2003: Niklas Zennstrom and Janus Friis, the entrepreneurs who founded file-sharing service Kazaa in the early 2000s, start a service that allows users to make voice calls over the Internet. They call the Luxembourg-based business Skype.

Oct. 2005: After gaining traction with users, Skype is purchased by eBay for approximately $2.5 billion, plus potential performance-based consideration.

April 2006: Skype says it has reached more than 100 million registered users -- nearly double the users it had the previous year.

May 2007: Zennstrom and Friis launch peer-to-peer online TV service Joost. The pair are said to raise as much as $45 million in funding.

Oct. 2007: Zennstrom steps down as CEO of Skype, becoming nonexecutive chairman. In 2007, Skype generates $382 million in revenues and claims to have 276 million users. However, eBay says it will incur a $1.4 billion "impairment" due, in part, to a $530 million earn-out payment to Skype shareholders.

August 2010: Skype files for an initial public offering, reportedly seeking to raise as much as $1 billion. The company says it generated more than $406 million in revenues through the first half of the year.

May 2011: After delaying its IPO, rumors begin to fly. Facebook and Google are said to separately consider buying Skype: A deal is said to be valued at $3 billion to $4 billion.

Not long after, Microsoft swoops in and agrees to buy the company for $8.5 billion in cash. Skype says it had 170 million users who racked up more than 207 billion minutes of voice and video conversations in 2010.

The investor group that sold Skype to Microsoft is said to pull in a total capital gain of more than $5 billion on the sale.