Finding a Niche in Aquariums for the Rich

By Rosalind Resnick June 14, 2011
Opinions expressed by Entrepreneur contributors are their own.

When Justin Muir received an aquarium as a birthday present 12 years ago, little did he know he would build a multimillion-dollar business around exotic fish in specially designed tanks – and the Manhattanites willing to pay big bucks to make a splashy statement.

Muir is founder and CEO of City Aquarium LLC, which designs custom aquariums for hedge-funders, celebrities and other wealthy individuals who prefer a living ecosystem to a wall of Warhols and Picassos. On the highest-end, the tanks can sell for more than a half-million dollars. The fish are extra. So is the tank maintenance, which can run upwards of $1,000 a month.

Catering to the wealthy clientele who can afford such luxuries can be time consuming. "They have huge personalities," says Muir, who wears a T-shirt and shorts to his sprawling warehouse in Williamsburg, a hipster enclave of Brooklyn, N.Y.

Not only can the work involve countless meetings with clients and their entourage, but it can also mean rushing over to a client's apartment when a fish gets fussy. Aside from running the company, Muir is principal designer and a marine biologist, so customers rely heavily on his expertise.

John Harkrider, a 44-year-old Manhattan attorney who paid City Aquarium more than $40,000 to design a tank for his SoHo apartment in 2007, called Muir one day when his family's pet fish, Puffy, began to hide behind the coral instead of flapping its fins to come out and play. Justin immediately sent a service technician to Harkrider's apartment. "Within a few days, our fish was feeling better again," Harkrider says. 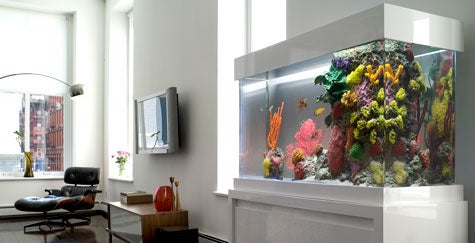 John Harkrider had this $40,000 aquarium built for his apartment in 2007.
Photo courtesy of Jason Brownrigg

Muir says his focus on offering around-the-clock personal attention has helped his business soar. With hefty 40 percent profit margins and only 10 employees, City Aquarium is hauling in the clams. Recent projects range from a living reef and twin seahorse aquariums for the bathroom of a Dallas divorcee (price: $600,000) to a 225-gallon tank (price: $60,000) for a New York hedge-fund manager with a passion for deep-sea diving and a 1,200-gallon tank for one of Honda's trendy Manhattan showrooms. Clients include Yankees stars Jorge Posada and C.C. Sabathia. 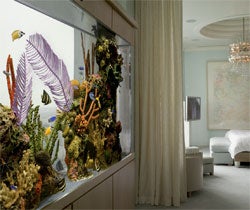 Muir's glamorous business is a far cry from his small-town roots on the New England coast. Born in Cohasset, Mass., near Cape Cod, Muir grew up lobster-fishing with his dad, who ran a gardening tools business, and quickly developed a passion for the ocean and its gilled creatures.

After graduating from Georgetown University and taking courses in aquaculture at the University of Hawaii, Muir started an eel farm in South Carolina and later followed his boyfriend to New York. In 2001, when his then-boyfriend gave him an aquarium as a 30th birthday gift and encouraged him to follow his passion, Muir launched his business three months later.

"It opened up a whole new world to me," recalls Muir, 40, whose company now earns about $5 million in annual revenue.

Muir, who sports an octopus tattoo on his arm, gained entree into New York's rich and famous circles partly through his well-connected clients in Chelsea's gay community. Before long, Muir was rubbing elbows with the likes of New York artist Ryan McGinness, top model Anna Semenova, and Fabien Cousteau, grandson of the late French ocean explorer and TV personality Jacques Cousteau. Muir also sits on the advisory board of Plant A Fish, the New York-based not-for-profit that Fabien Cousteau started to encourage local communities to "replant" aquatic species of plants and animals in environmentally stressed areas. 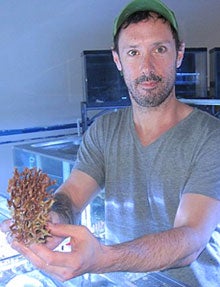 But, as Muir's business has grown, his personal life has suffered. Muir and his boyfriend ended their 10-year relationship six months ago, a breakup that Muir blames on his workaholism and obsession with providing 24/7 customer service. Still, he says he relishes his independence as a business owner. It was after the breakup that Muir got his octopus tattoo. "Cephalopods are incredible creatures because they adapt to the environment, they have the ability to change the pigment of their skin," Muir says.

Here are some lessons that Muir has begun to learn about selling to upscale clientele:

Pick your projects carefully. Muir says he's very selective about taking on projects because, as his company's lead designer, there's only so much work that he personally can do.

Be prepared to be on call 24/7. Even as his company has grown to 10 employees, Muir's clients pay for his specific expertise in maintaining aquariums. He makes himself available 24/7 to handle client issues and emergencies.

"My clients love their [exotic fish]," Muir says. "They become pets, so, when a fish becomes sick, they become very upset. They want to talk to me."

Closely monitor cash reserves. Luxury businesses like Muir's rely heavily on referrals and it can take months of meetings, presentations and contract negotiations before the client sends you a check. That's why Muir says it's important to have a steady flow of deals in the pipeline and conserve cash to tide you over when business is slow.