Entrepreneurs Ask: Will the Downturn Ever End?

By Carol Tice August 10, 2011
Opinions expressed by Entrepreneur contributors are their own. 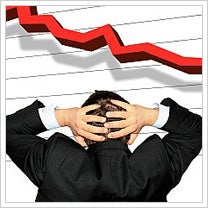 The past week was enough to rattle even the most optimistic small business owner.

The stock market tanked as the debt-ceiling debate dragged on, and didn't let up even after an agreement was reached. Then ratings agency Standard & Poor's downgraded the U.S.'s debt rating, and all heck broke loose in the financial markets: The Dow Jones Industrial Average plunged 400 points on Monday -- forcing the Fed on Tuesday to make an unprecedented promise to keep its key short-term interest rate near-zero through 2013. Stocks shot up, as a result. Today, however, those gains have all but disappeared.

It's a bit like being on a Tilt-a-Whirl ride. The worrisome thing is, if the stock slide turns into a prolonged malaise like we saw in 2008, little can be done to stop a major economic implosion.

Many of the strategies the federal government can put into play to try to stabilize the economy and encourage job growth were done long ago. The U.S. Chamber of Commerce called it "the worst-performing recovery in the post-WWII era" even before last week and notes that, at this point, we'd have to create nearly a half-million jobs every month to return to pre-recession employment levels a year from now.

All of which raises the question: Will the downturn ever really end, or is this the new normal?

It's hard to tell whether it's just a crazy week or the start of another round of stubborn economic doldrums. Prior to this week's rollercoaster ride, business owners were already in a pretty cautious mode. A recently released National Retail Federation Study showed retailers are anticipating shoppers will spend slightly less on the critical back-to-school season than they did last year.

In other words, retailers were betting against a rebound in consumer confidence even before last week. Along the same lines, the July Ceridian-UCLA Pulse of Commerce Index released today -- which monitors the movement of goods across the U.S. to make projections about the economy -- was down a hair, also on weakness in back-to-school.

To sum up, this boat's bobbing on choppy seas, not sailing ahead. What can you do while we wait for tailwinds to pick up? Here are three ideas:

Is the latest downturn here to stay, or will the economy improve soon? Leave a comment and give us your take.

Consolidate Your Cloud Platforms into One with Treasure Cloud

Amazon Accused of Lying to Congress