How I Did It: The TOMS Story

By Blake Mycoskie September 20, 2011
Opinions expressed by Entrepreneur contributors are their own.

In 2006 I took some time off from work to travel to Argentina. I was twenty-nine years old and running my fourth entrepreneurial startup: an online driver's education program for teens. We were at a crucial moment in the business's development, but I had promised myself a vacation and wasn't going to back out. Argentina was one of the countries my sister, Paige, and I had sprinted through in 2002 while we were competing on the CBS reality program The Amazing Race. (As fate would have it, after thirty-one days of racing around the world, we lost the million-dollar prize by just four minutes; it's taken me a while to be able to put those words together without weeping.)

When I returned to Argentina, my main mission was to lose myself in its culture. I spent my days learning the national dance (the tango), playing the national sport (polo), and, of course, drinking the national wine (Malbec). I also got used to wearing the national shoe: the alpargata, a soft, casual canvas shoe worn by almost everyone in the country. I saw this incredibly versatile shoe everywhere: in the cities, on the farms, and in the nightclubs. An idea began to form in the back of my mind: Maybe the alpargata would have some market appeal in the United States. But as with many half-formed ideas that came to me, I tabled it for the moment. My time in Argentina was supposed to be about fun, not work. 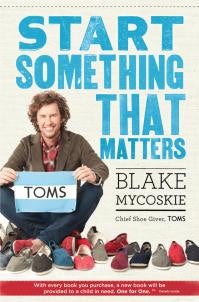 Toward the end of my trip, I met an American woman in a café who was volunteering on a shoe drive -- a new concept to me. She explained that many kids lacked shoes, even in relatively well-developed countries like Argentina, an absence that didn't just complicate every aspect of their lives -- including essentials like attending school and getting water from the local well -- but also exposed them to a wide range of diseases. Her organization collected shoes from donors and gave them to kids in need -- but ironically the donations that supplied the organization were also its Achilles' heel. Their complete dependence on donations meant that they had little control over their supply of shoes. And even when donations did come in sufficient quantities, they were often not in the correct sizes, which meant that many of the children were left barefoot even after the shoe drop-offs. It was heartbreaking.

I spent a few days traveling from village to village with the woman and her group, and a few more traveling on my own, witnessing the intense pockets of poverty just outside the bustling capital. It dramatically heightened my awareness. Yes, I knew somewhere in the back of my mind that poor children around the world often went barefoot, but now, for the first time, I saw the real effects of being shoeless: the blisters, the sores, the infections.

I wanted to do something about it. But what?

Call to Action
My first thought was to start my own shoe-based charity, but instead of soliciting shoe donations, I would ask friends and family to donate money to buy the right type of shoes for these children on a regular basis. I have a large family and lots of friends, but it wasn't hard to see that my personal contacts could dry up sooner or later. And then what? These kids needed more than occasional shoe donations from strangers.

Then I began to look for solutions in the world I already knew: business and entrepreneurship. An idea hit me: Why not create a for-profit business to help provide shoes for these children? Why not come up with a solution that guaranteed a constant flow of shoes, not just whenever kind people were able to make a donation? In other words, maybe the solution was in entrepreneurship, not charity.

I felt excited and energized and shared those feelings with Alejo, my Argentinian polo teacher and friend: "I'm going to start a shoe company that makes a new kind of alpargata. And for every pair I sell, I'm going to give a pair of new shoes to a child in need. There will be no percentages and no formulas."

It was a simple concept: Sell a pair of shoes today, give a pair of shoes tomorrow. Something about the idea felt so right, even though I had no experience, or even connections, in the shoe business. I did have one thing that came to me almost immediately: a name for my new company. I called it TOMS. I'd been playing around with the phrase "Shoes for a Better Tomorrow," which eventually became "Tomorrow's Shoes," then TOMS. (Now you know why my name is Blake but my shoes are TOMS. It's not about a person. It's about a promise -- a better tomorrow.)

I asked Alejo if he would join the mission, because I trusted him implicitly and, of course, I would need a translator. Alejo jumped at the opportunity to help his people, and suddenly we were a team.

Moving Forward
We began working out of Alejo's family barn, when we weren't off meeting local shoemakers in hopes of finding someone who would work with us. We described to them precisely what we wanted: a shoe like the alpargata, made for the American market. It would be more comfortable and durable than the Argentine version, but also more fun and stylish, for the fashion-conscious American consumer.

Most of the shoemakers called us loco and refused to work with us, for the hard-to-argue-with reason that we had very little idea of what we were talking about. But finally we found someone crazy enough to believe: a local shoemaker named Jose. For the next few weeks, Alejo and I traveled hours over unpaved and pothole-filled roads to get to Jose's "factory" -- a room no bigger than the average American garage, with a few old machines and limited materials.

Soon we started collaborating with some other artisans, all working out of dusty rooms outfitted with one or two old machines for stitching the fabric and littered with bits and pieces of cloth, surrounded by roosters, burros, and iguanas. These people had been making the same shoes the same way for generations, so they looked at my designs -- and me -- with understandable suspicion.

Alejo and I worked with those artisans to get 250 samples made, which I stuffed into three duffel bags.

Taking It to the Streets
Soon I was back in Los Angeles with my duffel bags of modified alpargatas. Now I had to figure out what to do with them. I still didn't know much about fashion, or retail, or shoes, or anything relating to the footwear business. So I asked some of my best female friends to dinner and told them the story: my trip to Argentina, the shoe drive, and, finally, my idea for TOMS.

Luckily, my friends loved the story, loved the concept of TOMS, and loved the shoes. They also gave me a list of stores they thought might be interested in selling my product. Best, they all left my apartment that night wearing pairs they'd insisted on buying from me. A good sign -- and a good lesson: You don't always need to talk with experts; sometimes the consumer, who just might be a friend or acquaintance, is your best consultant.

By then I had gone back to working at my current company, the driver's education business, so I didn't have a great deal of time to devote to hawking shoes. At first I thought that wouldn't matter and that I could get everything done via email and phone calls in my spare time.

That idea got me nowhere. One of the first of many important lessons I learned along the way: No matter how convenient it is for us to reach out to people remotely, sometimes the most important task is to show up in person.

So one Saturday I packed up some shoes in my duffel bag and went to American Rag, one of the top stores on the list my friends had compiled, and asked for the shoe buyer. Every month this woman saw, and judged, more shoes than you can imagine -- certainly more shoes than American Rag could ever possibly stock. But from the beginning, she realized that TOMS was more than just a shoe. It was a story. And the buyer loved the story as much as the shoe -- and knew she could sell both of them.

TOMS now had a retail customer.

Another big break followed soon afterward. Booth Moore, the fashion writer for the Los Angeles Times, heard about our story, loved it -- and the shoes -- and promised to write an article. One Saturday morning not long after, I woke up to see the front page of the Times' Calendar section: It was Booth Moore's story. TOMS was headlines! We already had 900 orders on the website. By the end of the day, we'd received 2,200.

That was the good news. The bad news was that we had only about 160 pairs of shoes left sitting in my apartment. On the website we had promised everyone four-day delivery. What could we do?

Craigslist to the rescue. I quickly posted an ad for interns and soon I had selected three excellent candidates, who began working with me immediately. One of them, Jonathan, a young man with a Mohawk haircut, spent his time calling or emailing the people who had ordered shoes to let them know their orders weren't coming anytime soon, because we didn't have any inventory -- in fact, they might have to wait as long as eight weeks before we had more. And yet only one person out of those 2,200 initial orders canceled, and that was because she was leaving for a semester abroad.

Hollywood's Stamp of Approval
Now I had to return to Argentina to make more shoes. In the meantime, back home, publicity kept growing as the LA Times article sparked more coverage. The next big hit came when Vogue magazine decided to do a spread on TOMS, although I doubt they knew our company consisted of three interns and me working out of my apartment. In the magazine, our forty-dollar canvas flats were being featured next to Manolo Blahnik stilettos that sold for ten times as much. After Vogue, other magazines, such as Time, People, Elle, and even Teen Vogue, wrote us up. Meanwhile, our retail customer base was expanding beyond the trendy Los Angeles stores to include national powerhouses such as Nordstrom and Urban Outfitters. Soon, celebrities like Keira Knightley, Scarlett Johansson, and Tobey Maguire were spotted around town wearing TOMS.

We ended up selling 10,000 pairs of shoes that first summer -- all out of my Venice apartment, a fact we had to hide from my landlady because I wasn't at all certain that my lease allowed for running a shoe company out of my living room. She was something of an oddball and would occasionally walk into the apartment unannounced. Luckily, her car had a terrible muffler that announced her presence from a block away. Whenever anyone heard that racket, we'd perform an extreme cleanup and all the interns would hide in my bedroom; when she showed up, there was no sign that a full-fledged business was being run out of a residential apartment. Sometimes we'd even hold drills just to make sure we could clean everything up within a few minutes.

This adapted excerpt comes from chapter one, "The TOMS Story," of Start Something That Matters by Blake Mycoskie and is used with permission from Spiegel and Grau.