Jim Koch shared his family's passion for beer. His father was a fifth-generation brew master. "Beer was kind of in my blood, hopefully around the legal limit though," Koch says, with a chuckle. While he seemed destined to life in the craft brewing industry, there would be a long detour of self-discovery before Koch returned to his roots to start Boston Beer Co. in 1984.

Koch (pronounced "Cook") grew up just outside of Cincinnati, Ohio, and the U.S. beer industry was consolidating quickly in the 1960s. Foreseeing a losing battle with the industry giants, his father had "no desire," Koch says, for him to follow in his footsteps.

So he didn't. Instead, Koch started down a more buttoned-up path and attended Harvard University, going on to a joint law and business school program there. But before graduating, he suddenly realized he could no longer settle for the traditional life he was creating for himself.

The Making of a 20-Something Multimillionaire Serial Entrepreneur

"I finally thought, 'Wait a minute, I'm on this path and it doesn't lead anywhere I want to go. I better get out of here and I'm not coming back until I own my life and the decisions I make are not a result of other people's plans or expectations,'" recalls Koch, now 62.

So he dropped out of business school and his life took a screeching 180-degree turn. Koch became an instructor at Outward Bound, a Golden, Colo.-based nonprofit expedition school, and spent the next three-and-a-half years teaching wilderness travel, mountaineering, whitewater rafting, and other adventurous pursuits.

He did finally return to Harvard, but this time consciously choosing to do so, and graduated in 1978. He went on to become a consultant for Boston Consulting Group, which he says was then a tenth of its current size and a "hotbed of innovation in business thinking and strategy." Looking back, Koch realizes it was as entrepreneurial a career as he could find, considering he knew no "readily available" entrepreneur role models to serve as mentors. "This was long before the idea of high-growth entrepreneurs and venture-capital firms that we know today," he explains.

After five years of consulting, that gnawing restlessness surfaced again. It was finally time for his life to come full circle. Koch went back to his dad for the family's best beer recipe and started Boston Beer Co., from his kitchen.

Little more than a decade later, in 1995, he took the Boston-based craft brewery public. In 2011, the 800-employee company has grown to include more than 32 styles of beers, while always introducing new brews each year. For the first nine months of 2011, net revenue totaled $371 million, up nearly 7 percent over the same period last year. Annual revenue topped $500 million in 2010.

In this interview with 'Trep Talk, Koch shares insight on facing challenges, staying connected and what a startup must have for long-term success. Edited excerpts follow.

Lessons from the dropout years: I was gathering my forces in a way standard education does not allow. I learned about being able and willing to challenge yourself and being happy in a completely unstructured situation. I learned about leadership and getting people to do things they didn't believe they could do. I also learned self-reliance and teamwork simultaneously.

Daily ritual: At the beginning of each day, I ask myself: What are the three most important things I need to get done? Despite distractions, pressures and opportunities that come up, I make sure I've done those three things before the day is over.

On competition: As a craft brewer in America, after 27 years we've finally gotten to 1 percent market share, so my competition is not craft brewers because we're all going to succeed or fail together. My real competition is ignorance and apathy. I'm about creating an appreciation of good beer, educating people about it and teaching them to treat it with respect. If I can do those things, I can succeed.

Related: How Five Craft Brew Masters Got the Beer Bug

My ideas come from… always wanting to do new things because that's cool. Some people want to keep doing the same thing but better, and some just have a restless dissatisfaction with the status quo. I probably add more value because I'm in the second group. But you need both.

Favorite book: Out of the Crisis (originally published in 1982) by W. Edwards Deming. He's known for bringing quality control into modern manufacturing and the book speaks to that, but in a more general sense. It focuses on how you treat people. One of the main points is driving out fear. As a former mountain climber, that resonated. Until you drive out fear, your mind can't focus on making clear, good decisions.

On staying connected: As a business grows, the people at the top are often cut off from the market, the customers, and what's really happening. I still do a lot of street selling and spending a lot of time in front of customers, whether it's trying to get a draft line or a better place on the shelf. It teaches me the real challenges. We don't do a lot of market research or focus groups, but I see real customers and to me that's a lot higher quality information.

Sales secret: Find a way to show how your product will help customers accomplish their objectives. If you can't, then you're wasting your time because even if you sell them your product, they're not going to buy it again. And if it's a bad experience for them, you're better never having made the sale.

Three people I wish I could have over for a beer: [The late] Steve Jobs, Eric Shipton, who was the last of the great British mountaineers and explorers. He always kept his sense of wonder. And W. Edwards Deming, the father of modern ideas of quality, who demonstrated there's more value from quality than from efficiency, and ultimately quality is efficient.

Startup tip: You have a viable business only if your product is either better or cheaper than the alternatives. If it's not one or the other, you might make some money at first, but it's not a sustainable business.

Favorite brew: During the course of a day, I might have 12 or 15 different brews and that's intriguing. But when I get home to relax, it's with a Sam Adams Boston Lager, my original beer. That's what's in my refrigerator.

On giving back: Writing a check is easy but I've always believed business has a responsibility to the society that allows it to exist and prosper. Adding value to the community goes beyond just making donations. That's why we started the Brewing the American Dream program. It offers micro-loans, coaching and mentoring to entrepreneurs in the food, beverage, and hospitality industry who can't get money but really need a loan to grow their businesses. Through the program, we're getting a repayment rate of about 90 percent and it has created hundreds and hundreds of jobs. 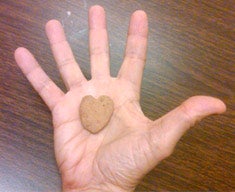 Staying Grounded: The heart-shaped rock Jim Koch's daughter gave him as a lucky charm when he travels.
Photo courtesy of Jim Koch

Lucky charm: My 13-year-old daughter carved this little heart-shaped rock and gave it to me about five years ago to carry for good luck. I'm away from home a lot traveling, so I take pictures of it in different places and send them to her.

I'm inspired by… many figures, like Mother Teresa, who said 'give the world the best you have and it may never be enough, but do it anyway.' It gives you serenity to realize that you do this stuff not necessarily for success and accomplishment because success doesn't last and whatever you accomplish is eventually going to get destroyed. You have to have a more intrinsic motivation to do it anyway. Also, William Butler Yeats, who had the clarity of mind to write his own epitaph, and Gregory Mallory and Andrew Irvine who were the best pre-World War ll climbers in the world.

On facing challenges: Every problem has a solution. You may not see the path to your goal, but there is a path. Like climbing mountains, as I did for years, it's about staying focused on the summit. No one ever climbs a mountain to get to the middle. You don't focus on the difficulties; you take it one step at a time knowing you're going to get to the top.