By Jane Porter December 13, 2011
Opinions expressed by Entrepreneur contributors are their own.

Mark Carlson couldn't even look at the phone without feeling anxious about being rejected by prospective clients. Soon, sales at T. Charles Wilson Insurance Service, the Aurora, Colorado, firm he bought three years ago, began to decline, dropping from $1.6 million in 2009 to $1.4 million last year. He knew he had to overcome his apprehension fast. 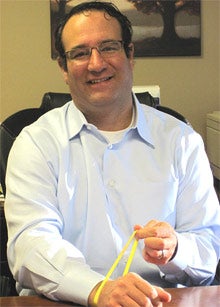 Using techniques he learned in a seminar on sales prospecting, Carlson decided to try zapping his negative feelings. Literally. He started wearing a thick yellow rubber band around his wrist that he called a "thought zapper." Every time he looked at the phone and felt anxious, Carlson snapped the rubber band and thought of something positive. He also made a point of scheduling time each day to call potential clients. Soon his negative thoughts dissipated, and sales rebounded this year to $1.6 million.

Fear of rejection is common among small business owners like Carlson, especially those who are just learning how to sell themselves and their product or service. Consider these seven rules for coping with rejection in your business.

Know your sales ratio. Rejection is inevitable when you're selling, but you may not get as discouraged if you know how much to expect. Trelitha Bryant, a vice president at Behavioral Sciences Research Press, a Dallas-based firm that focuses on how fear affects selling, calls it your "sales ratio" and estimates that on average it takes about 30 calls to get an appointment with a prospective client.

The number will vary depending on what you're selling; bigger ticket items typically have a higher sales ratio. There's no science to figuring out this number, but talking to others in your business about their experiences and paying attention to your own success rate will help you estimate how many rejections to expect. "That knowledge of what your sales ratios are is going to help to immunize you to rejection," says Bryant, whose firm put on the seminar that Carlson attended.

Set long-term goals. A personal goal also can help you reframe your thinking to cope better with sales rejections, Bryant says. Goals that go beyond your business objectives help "you stay focused and persevere through those challenges."

Perhaps you want to pay for your children's college education or donate money to a favorite charity. For Carlson, it helped him stay motivated if he thought about being able to take his daughters to Disneyland again.

Don't take it personally. Many small business owners, especially solopreneurs, take rejection personally. They figure there's no one to blame but themselves. "When you work for yourself, you have no excuses," says Mike Taubleb, founder of Promenade Speakers Bureau, a lecture agency in Brooklyn. "It's all up to you."

Debra Condren, a business psychologist and small business coach in New York, advises people like Taubleb to avoid self-blame. "Every time you get rejected you learn something about yourself," she says. "Look at it more as a learning opportunity."

Get into a routine. Developing a routine is another way to stay motivated. For Carlson, making phone calls at the same time everyday has helped him overcome his fear of rejection. Every morning at 9, he spends half an hour calling prospective clients; then he gets back on the line at 10:30.

Build relationships. Don't reject prospects after they reject you. "If you've been rejected, it doesn't necessarily mean this person will never be your client," Condren says. "Keep the conversation going."

She suggests creating a newsletter or writing articles that establish you as an authority in your field and allow you to communicate regularly with potential customers. You will feel better about yourself and develop credibility with prospects. "They are looking to you as an expert source," she says. "It's all about relationship building."

Acknowledge your accomplishments. Taubleb makes sure to keep track of his daily achievements. Each night before bed, he writes down the top three or four things he did that day in his journal. It helps him sleep better. "I've almost never skipped a day," he says. "That helps me recognize progress."

He also focuses on the sales he has won and finds that they outweigh the rejections. "You only need a few of them to carry you psychologically for a while," he says. "It's your success."

Related: Five Signs You're Losing a Sale -- And How to Save It